Overclocking the 9900K is very similar to any other Coffee Lake CPU although depending on boards you use the options can vary wildly. One thing to note is that much like the 8086K which was really kind of pushed to its limit there’s not alto of headroom left on these chips. Add to that even though the solder TIM or STIM as Intel has labeled it, the chips still run quite hot when pushing them. Its simple physics, they stuffed two more cores into this small package so its 25% more chip to cool vs an 8700K and yes the TDP is 95W but that’s at the base clock. When we watched turbo take effect we saw power draw for the CPU swing up to the 160W range which as I’m sure you can imagine generates some serious heat.

We were able to get a fully stable 5.1GHz clock at 1.365VCore, however, the benefits were marginal at best as enabling MCE or Multi-Core enhancement or Enhanced Turbo or however it may be referenced depending on your board will run up to 5GHz on all cores anyways or close to it. 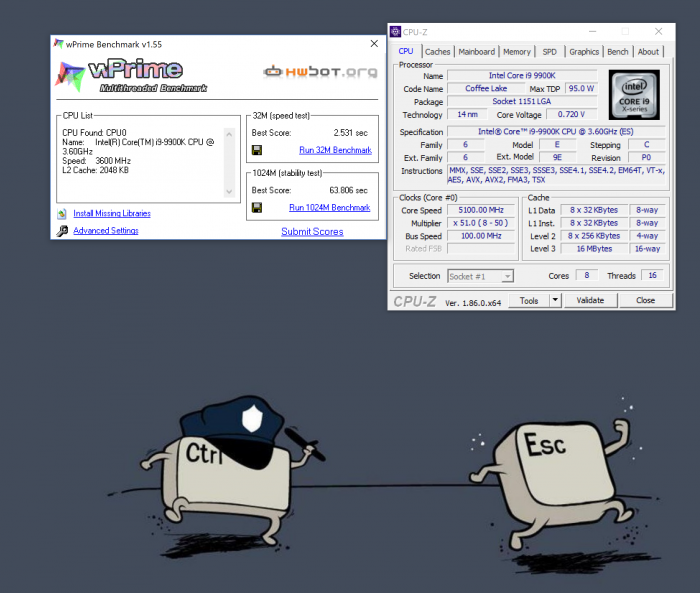 the Gigabyte board was able to hold 5GHz stable quite easily and 5.1GHz for longer tests and that with our chip which was simply not that good.

Now unfortunately after the testing was all complete we got hands on more chips to test and found a much better unit so at some point we will have to do a roundup with the new better chip to show how much better these boards may be able to clock.

For Thermals the 9900K is an interesting animal as it can get really hot really fast. then again we are packing more cores onto the already toasty 8700k in essence right?

Our thermal results when testing with MCE “AUTO” was well manageable, 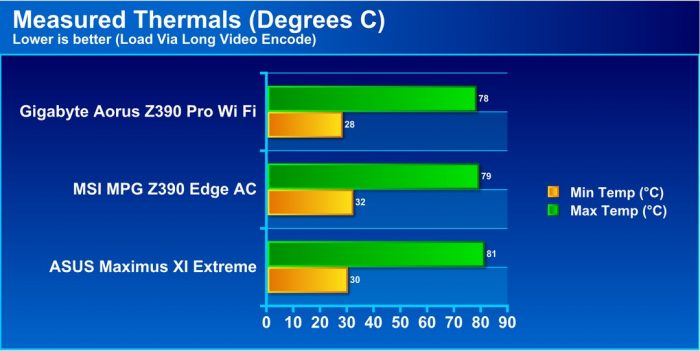 We test with a real-world load by running large video encodes in succession to fully burn in the CPU. We do not use artificial stress tests such as Prime95 or IBT as those are simply not indicative of a real-world loading scenario and can also potentially hard hardware due to overdrawing components and potential thermal overrun.

We did find that there are still issues with the MSI and Gigabyte boards we have on hand. When you enable MCE they can overheat even on our 360mm AIO as they do not have an AVX offset while the ASUS board plays within a safer margin to ensure the longevity of your system along with following closer to Intel’s guidelines for turbo stepping parameters.

The power consumption of the 9900K goes from mild to wild with values ranging from 11.25W at idle to 260W+ (For the CPU alone)  when pushed on the ASUS board. 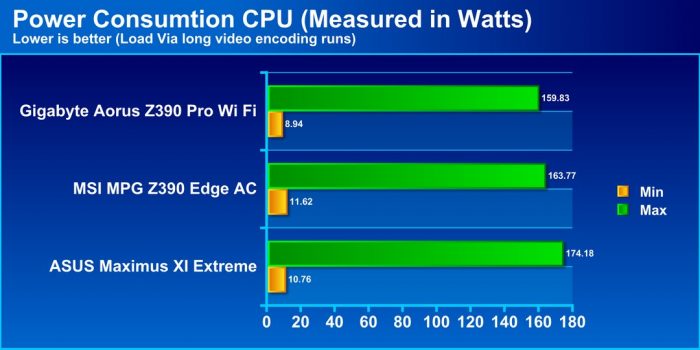 Here as you can see, the power consumption can get pretty high which also explains the temp ramping in lockstep. This is with MCE on AUTO and testing Handbrake encodes which is AVX enabled.. as you can see ASUS is a little more liberal with delivering power when needed and ensures full AVX stability even while lowering speed to ensure stable operation and avoiding overtemp issues.