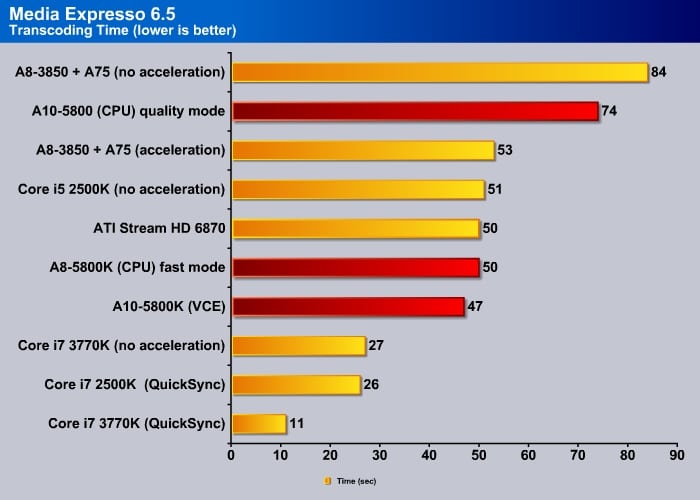 Cyberlink MediaExpresso 6.5 and Arcsoft MediaConverter 7.5 are two softwares that are currently supporting the Intel Quick Sync and AMD VCE. When comes to video transcoding, nothing can touch Intel’s QuickSync at the moment. The A10-5800K is just as fast as the Core i5 2500K without any hardware acceleration and is faster than the Llano. With VCE enabled, we shed 3 seconds off compared to the fast mode and 27 seconds off compare to the quality mode. 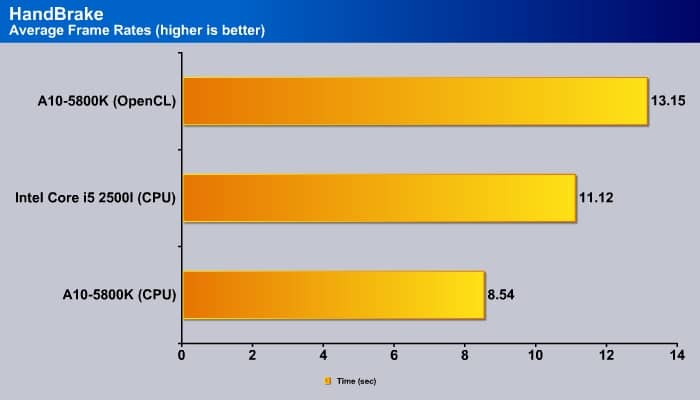 HandBrake is an open source media converter that supports OpenCL. The software is available online free to download but the current version 0.9.8 does not yet support the OpenCL and we have gottena  beta version that allows us to test the performance with and without OpenCL. We did not have much time to run the test through a list of CPUs so we only include a small data set.

Clearly, A10-5800K is slower than the Sandy Bridge CPU when transcoding video through the x86. With OpenCL enabled, we got 54% gain in performance. We will have to do more test and compare the performance with the GPU acceleration on Sandy Bridge and OpenCL performance of the Ivy Bridge. So far, we can see that if the software is capable to tapping into the GPU power via OpenCL, Trinity can gain significant gain where it goes from being underperforming be a very competitive at its price range.

Ultimately, this all lies on the software support. Currently, AMD lists about 10 applications that supports OpenCL that includes some of commonly used software titles: WinZip 16.5, GIMP 2.8, Adobe Flash 11.2, Adobe Photoshop CS6, ArcSoft MediaConverter 7.5, and CyberLink MediaExpresso 6.5, Handbrake. Obviously, software programmers would need to take their time and implement such support and we hope more software will adopt OpenCL and similar technology to fully take advantage of modern processing power.

Let’s take a look the theoretical GPU compute power of the HD 4000. We ran Sandra’s GP Computing  benchmarks. Keep in mind that these numbers are theoretical performance.

In the Cryptography benchmark, the Trinity trumps the fastest Ivy Bridge