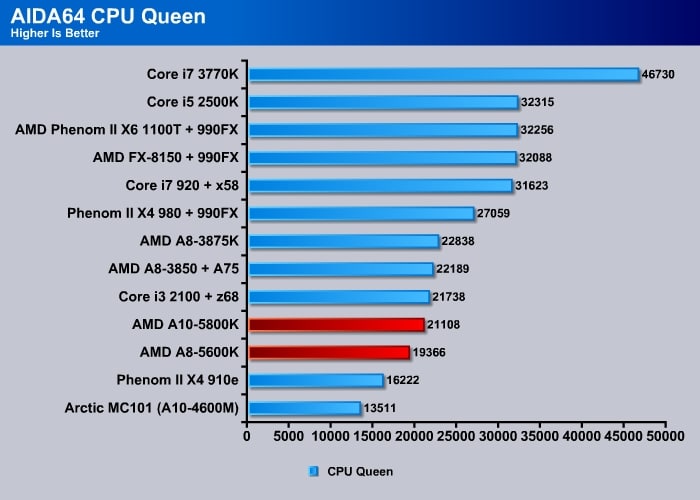 AMD positioned the A10-5800K against the Intel Core i3 processor and based on the AIDA64 CPU Queen benchmark, the competition is justified. Notice that the older Llano actually performs faster here despite both APUs featuring four integer cores. This test involves the branch prediction capabilities of the CPU and looks like despite the improvement on the Piledriver’s branch prediction, it may not be as fast as the old offering. 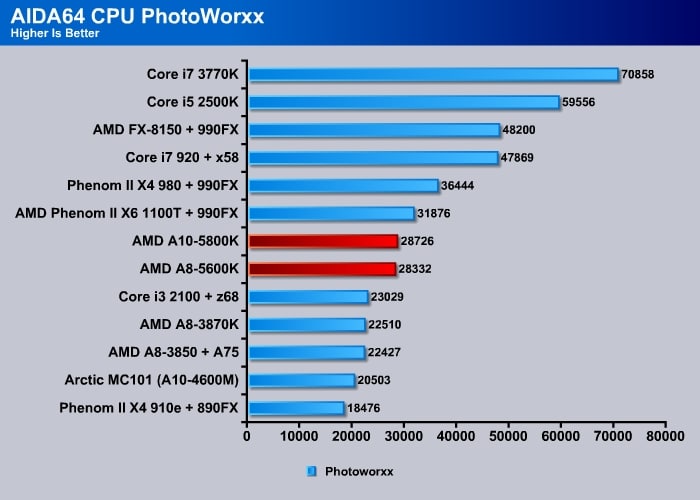 Things turns around for Trinity in the Phtoworxx benchmark where the new APU not only out-performs the older models but also is faster than the Core i3 2100. The test involves not just the CPU integer arithmetic and multiplication execution unit but also the memory subsystem. 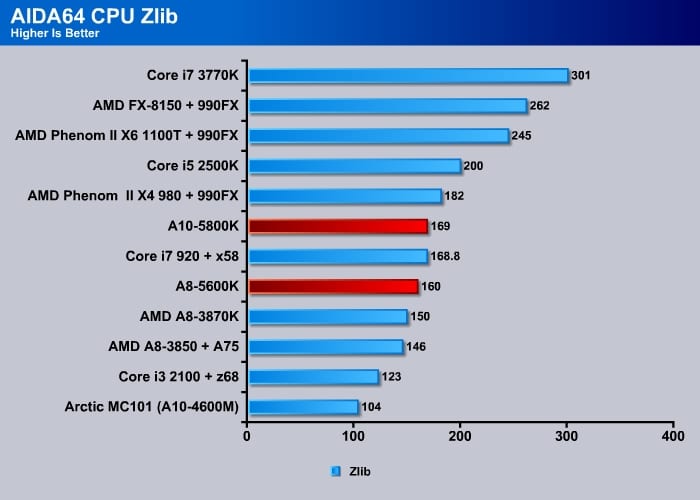 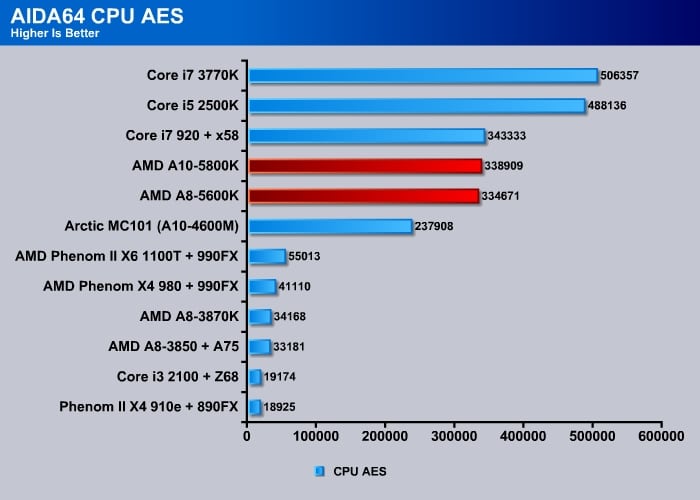 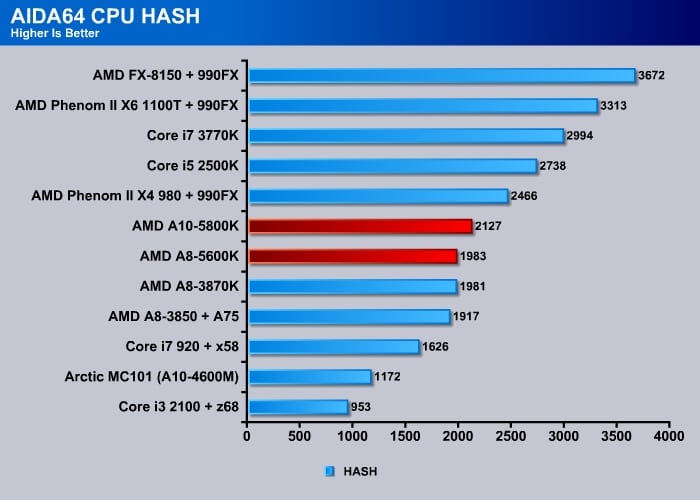 The new entry to the AIDA64 supports many of the new instructions such as AVX or XOP extensions. Here again the A10-5800K does very well and we can see that the A8-5600K is actually just as fast as the fastest Llano, the A8-3870K. 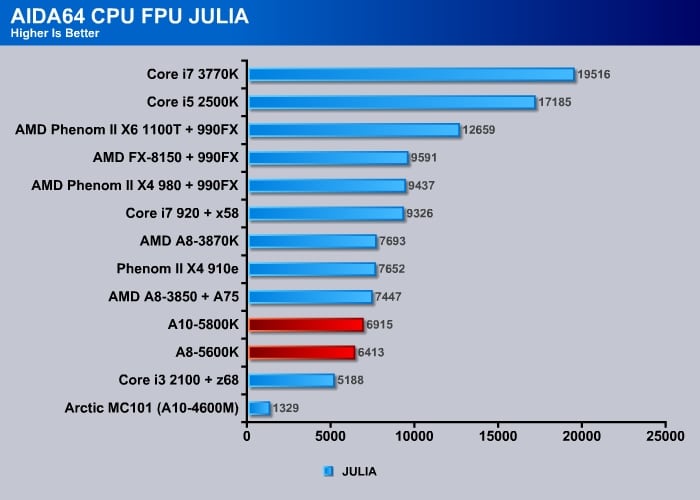 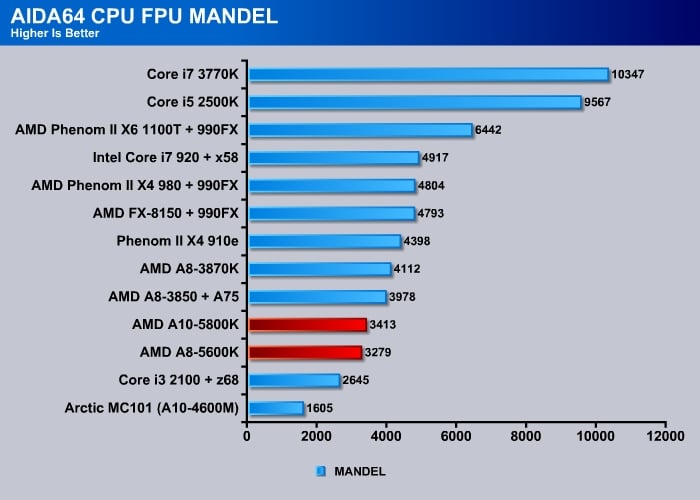 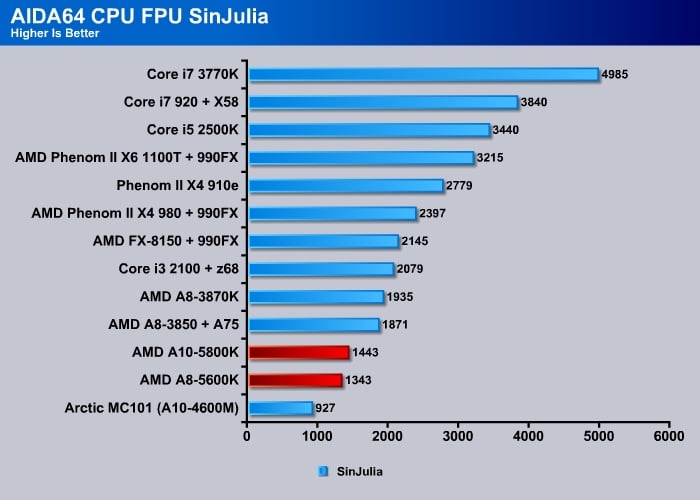 The extended float point calculation (80-bit) is a weak spot for Trinity, most likely because it only has two float-point units. 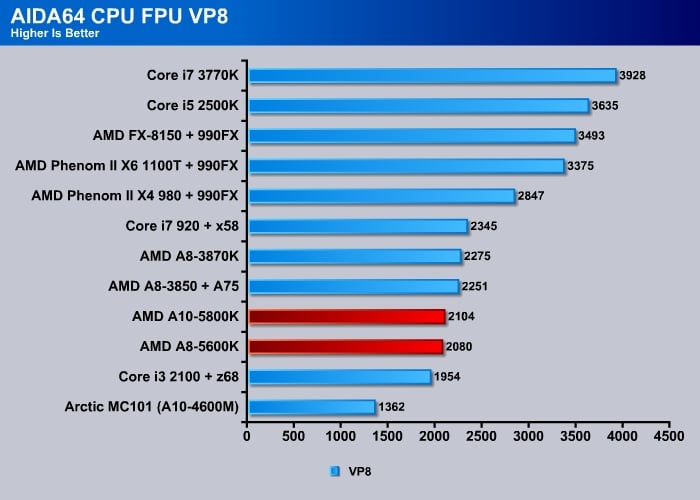 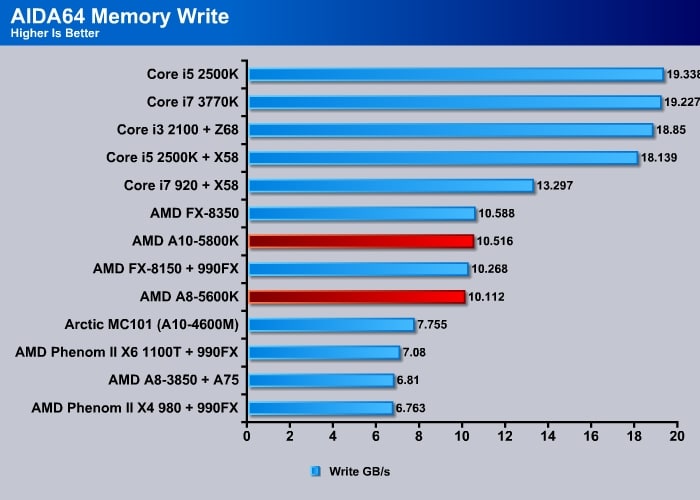 The memory subsystem has been improved significantly on Trinity where its memory performance is much better not only over Llano but also over Bulldozer. The write speed on A10-5800K is almost as fast as the Sandy Bridge and is more than double the K8 and about 70% faster than the Bulldozer. 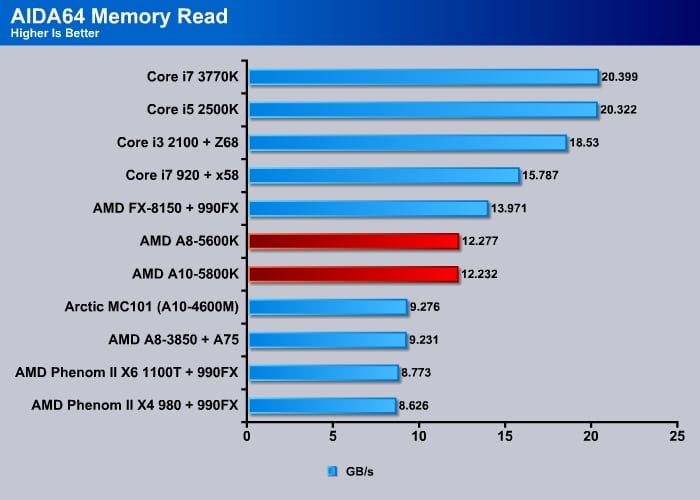 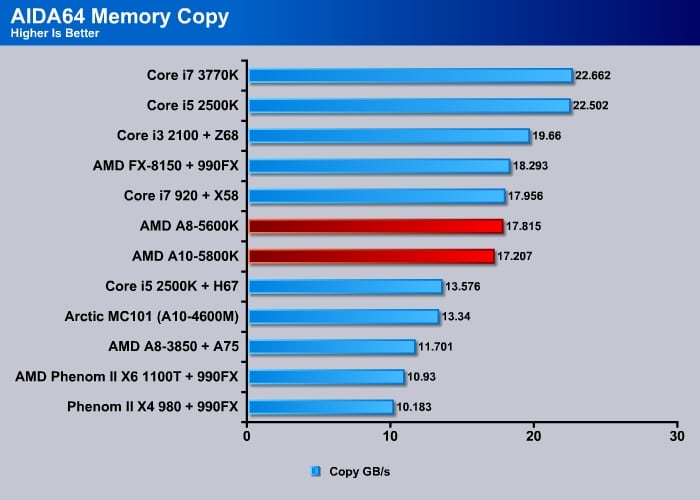 The copy is faster than Llano but still trailing behind the Intel platform. 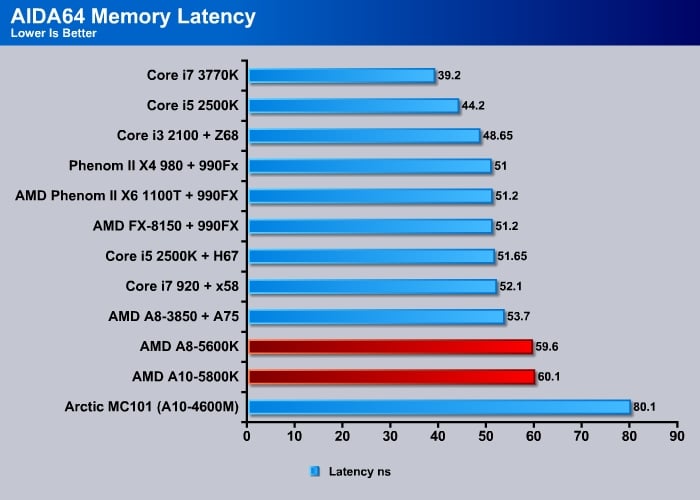 Interestingly, the latency on the Trinity is worse than that of  either Llano or Bulldozer. Intel once again dominates the chart here. 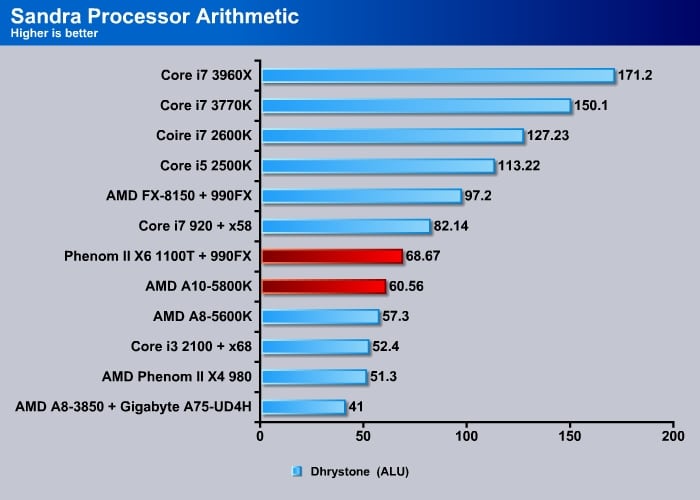 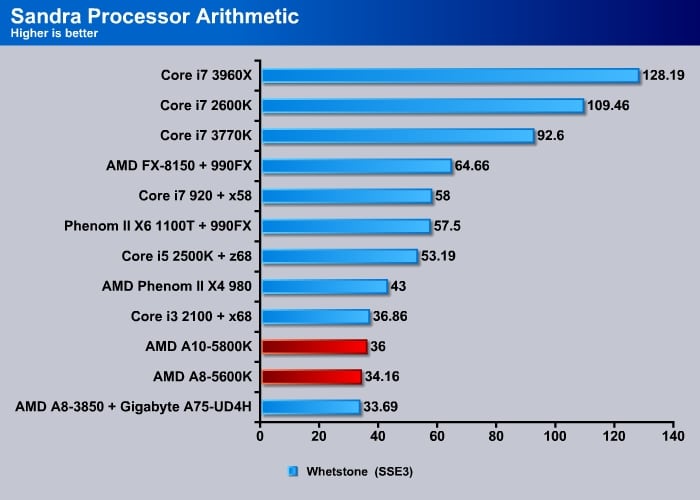 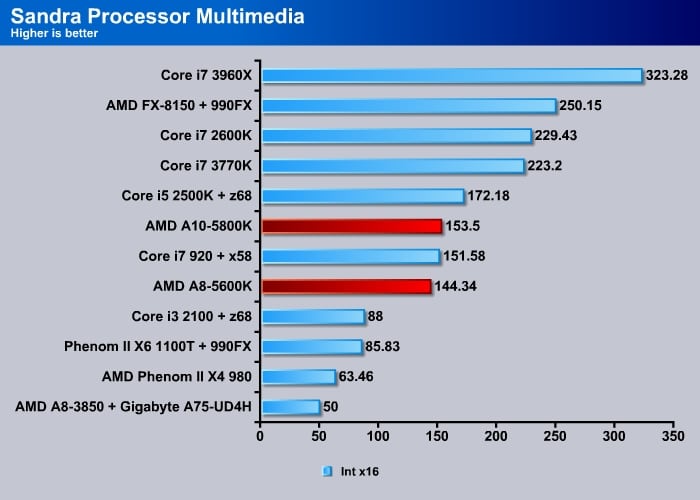 Not much of a surprise here as with four dedicated integer calculation core, the A10-5800K comes ahead of the Core i3. Notice that Trinity is actually much faster than the K8 CPUs (Phenom II and A8-3850) and is about as fast as the Nehalem (Core i7 920). 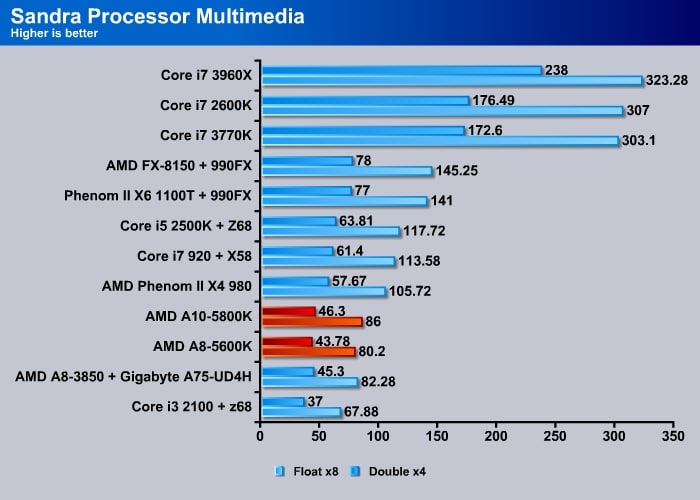 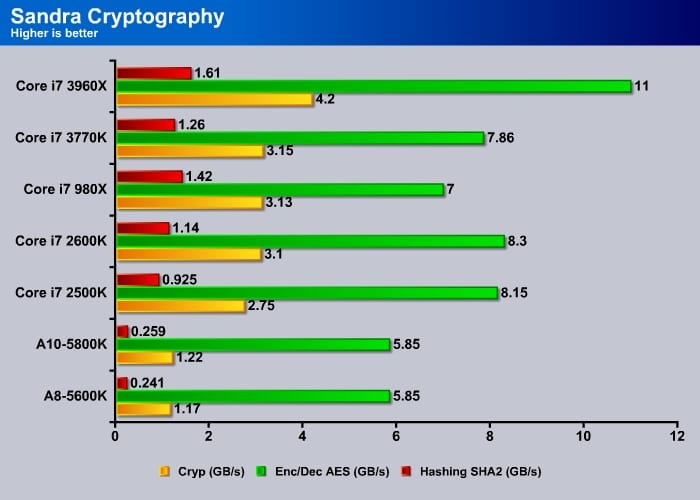 When comes to Cryptography, we can see that Intel still dominates here but the dedicated hardware assistance on the Trinity definitely helps a lot with the workload. Keep in mind that that chart above only shows the performance difference between CPUs with dedicated hardware AES encryption and not those without (Llano and some Core i3 CPU models). 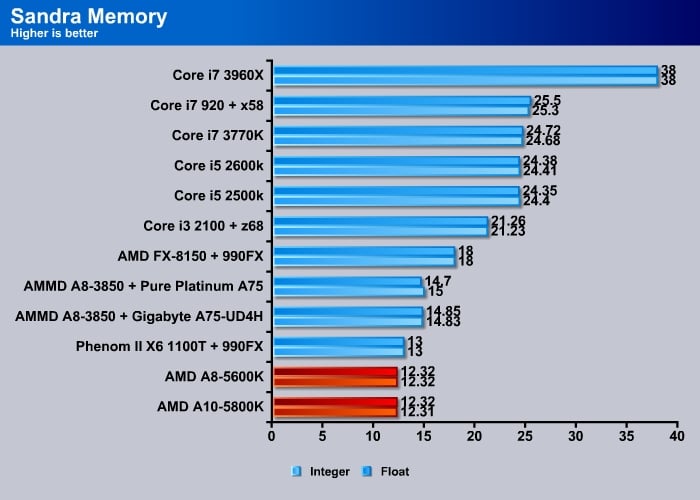 Oddly enough, the memory performance on Trinity seemed to be worse here.