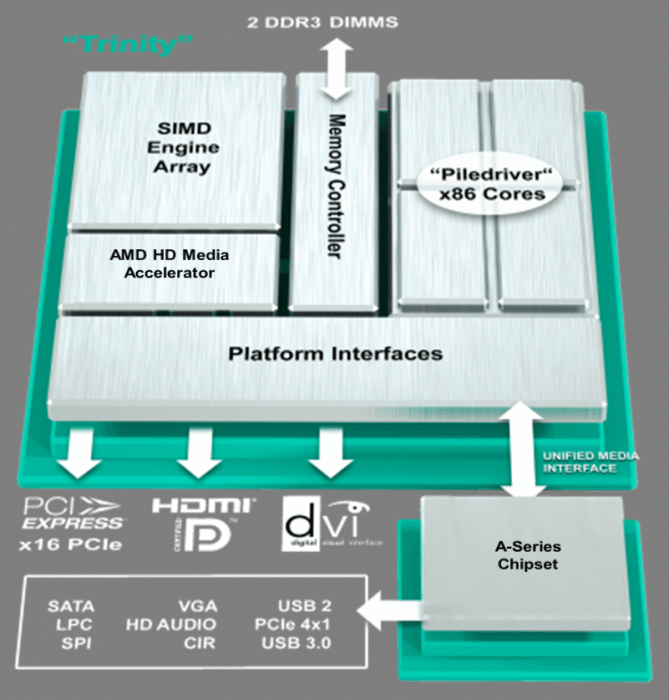 Today’s launch is not just an APU launch but a platform launch. We get the A-Series APU and a new A85X chipset. 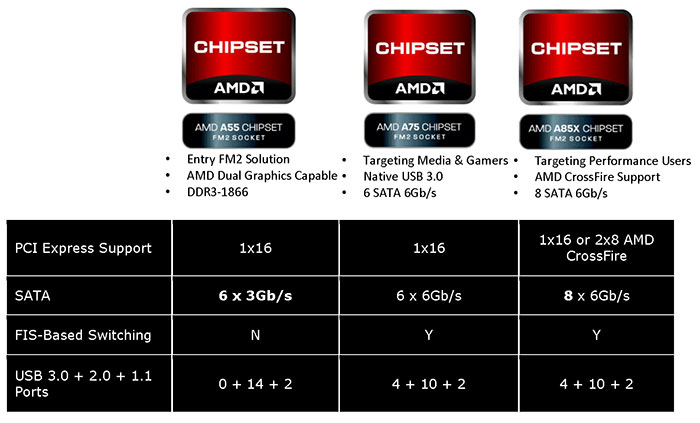 Three different chipsets will support the A-series APU: A55, A75, or A85X. The A55 and A75 are not new as they were introduced when Llano was launched. No new features have been added to ether one of these two chipsets. They still support only one PCI Express 2.0 x16. The A55 only comes with SATA 3 Gbps and USB 2.0, while the A75 will come with SATA 6 Gbps and four USB 3.0 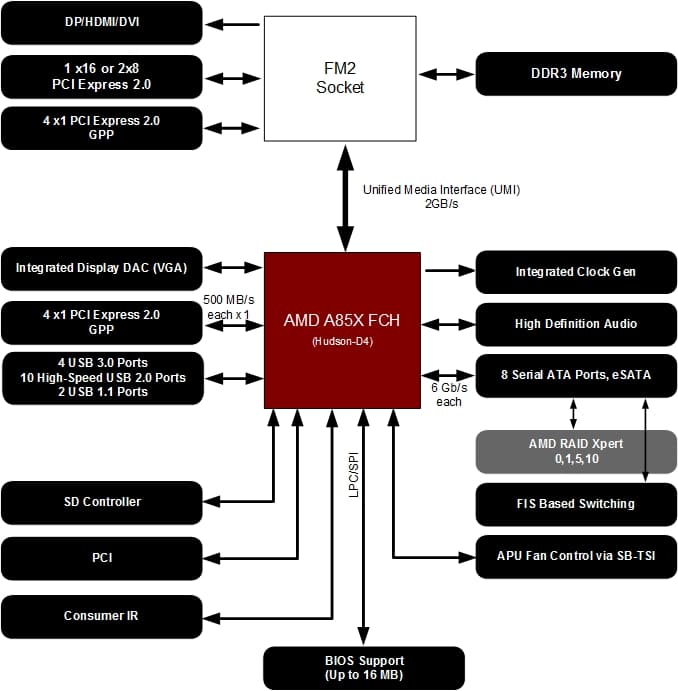 The new addition, the A85X, is not much different from the A75 except it now is able to split the PCI-E bandwidth into dual x8 for CrossFire. Additionally, we gain two extra SATA 6 Gbps ports, bringing a total of 8. 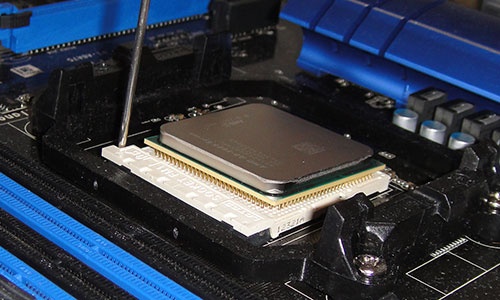 Trinity will require a new socket, FM2, that is not backward compatible with previous generation APU (socket FM1). The socket FM1 board will not work with FM2 APU and neither would the FM2 APU will fit the FM1 board. This is a little bit unfortunate since the FM1 socket was introduced only a year ago and it is no longer being supported. According to AMD, the FM2 socket should stay a little bit longer as future APUs (ie. the die shrink of Trinity) will also be FM2 socket so hopefully we will see a longer upgrade path.

The good news is that the older heatsink that is compatible with the Socket FM1 will be compatble with the new Socket FM2. We are actually using an old Thermalright cooler from way back and it is still functioning without any issue.

During our meeting with AMD, we were informed that the new platform brings a new feature: Radeon RAMDisk. The idea of RAMDisk is not new but it is the first time that AMD is putting it on its own platform. When you pair the AMD A10 APU with AMD Memory, users are able to use RAM as a caching drive for faster data accessing and hence better performance With the A10 APU, AMD allows up to 64GB of storage for caching. AMD’s implementation is similar to Intel’s Smart Response (SSD Caching) except Intel uses an SSD for caching while AMD chooses cheaper alternative–DDR RAM. Either way, the goal is to let the end-user to have a much more responsive system.  We could not get much information from AMD as to whether the RAMDisk cache would be backward compatible to the older generation A-Series APU. We also could not get hold of the software needed to setup the RAMDisk so we cannot comment on it more than what we present here. We would have to wait until we can get a hold of the software to test this feature in the near future. 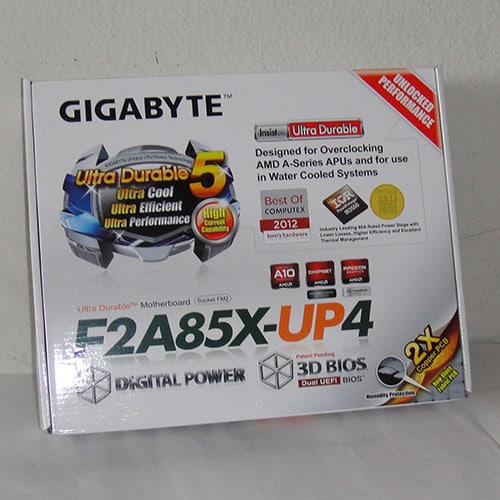 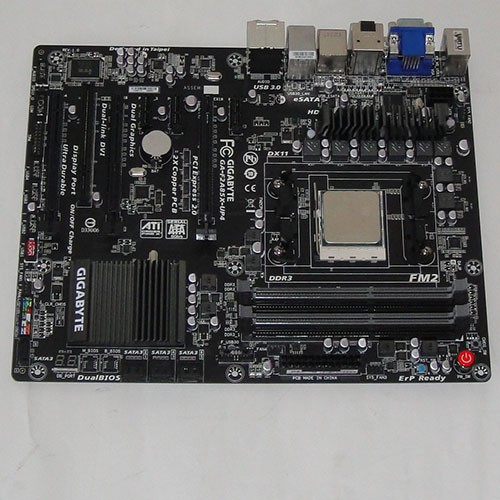 The board is an ATX form factor that features GIGABYTE’s Digital Power, Ultra Durable 5, 2x copper PCB, and GIGABYTE’s 3D BIOS. Around the CPU socket, we can see that the CPU has been moved closer toward the center of the board as opposed to close to the rear IO. This leaves more room for big horizontal heatsinks, but it also puts the CPU closer to the DIMM slots, which can potentially be an issue if you choose a large heatsink that extends out out of the CPU. The board features four DIMM slots that supports 64GB DDR3 up to 1866 MHz. 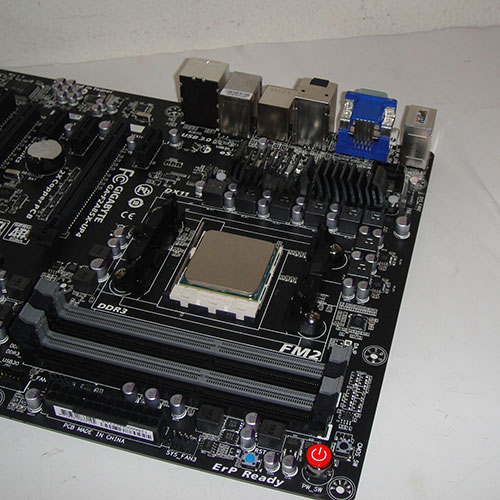 It is very nice to see that GIGABYTE is not skipping the onboard Power On/Off button, Clear CMOS button, and the reset button on the board. We absolutely love these onboard buttons as it makes our job much easier. The only thing we probably wish the board comes is the rear Clear CMOS button. Another neat feature is the dual 64Mbit BIOS with a dedicated BIOS switch. 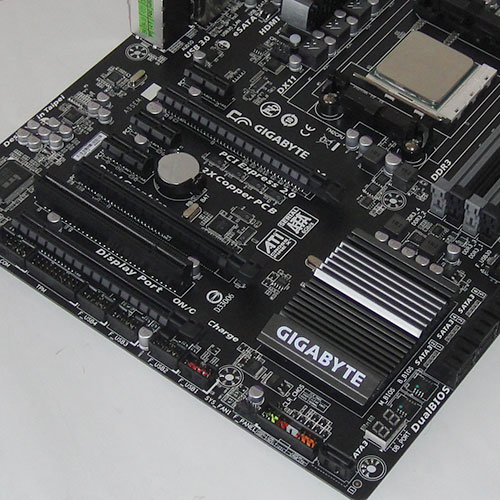 For storage, the board comes with 7 SATA 6Gbps courtesy of the A85X chipset. The board supports RAID 0/1/5/10 and JBOD.There are four fan headers sprinkles across the board in addition other CPU fan header. All five fan headers are 4-pin design. GIGABYTE put the APU fan header toward to the center of the board, between the PWM and the PCI-E expansion slot, as oppose to the edge of the board. The placement makes it a little bit hard to reach if the board is installed inside the case. The four additional fans are all placed close to the edge of the board where one is located on the top, two are next to the 24-pin power connector, and the last one is on the bottom next to the front panel header. Three of the four system fans support speed control.

For expansion, the board comes with three PCI Express 2.0 x16 slot. The first slot runs at x16 bandwidth and if the second slots are populated, both slots will run at x8 fr CrossFire. The third slot is always running at x4. There are three PCI-E x1 slots and a PCI slot for other add-on cards. The spacing of the first two x16 PCI-E slots is far enough for a three slot cooler, however, if you install two cards with dual slot cooler, you will only be left with two single PCI-E x1 and the last PCI-E x16 for expansion. The PCI slot will be blocked by the second PCI-E x16. 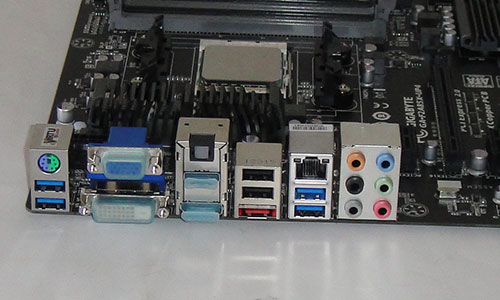 Flip to the rear of the board and we see the board comes with one PS/2 keyboard/mouse port, one D-sub pot, one DVI-D port, one HDMI port, one DisplayPort, one optical S/PDIF out connector, four USB 3.0 ports, two USB 2.0 ports, one eSATA 3 Gbps port, one Ethernet port, and the standard audio jack. The network is controlled by the ubiquitous Realtek Network Controller and the audio is the equally ubiquitous Realtek ALC892. We were a little surprised to find that the eSATA port is 6Gbps as oppose to 3Gbps since the AMD A85X chipset supports 8 SATA 6 Gbps ports and seven of them are used for internal SATA, so we presumed GIGABYTE would simply route the remaining SATA 6 Gbps to the eSATA port. Two of the four USB 3.0 headers are controlled by the A85X while the other two are controlled by Eton EJ168. 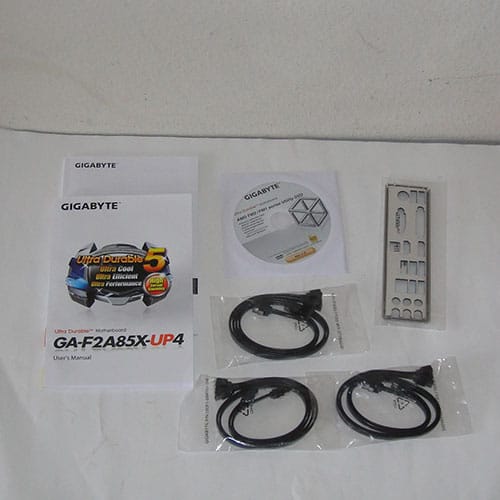 GIGABYTE ships the board with the manual, driver CD, six SATA data cable, and the rear IO plate.