AMD launched the mobile Trinity SKUs back in May and we will not repeat them here. Today we will just focus on the desktop Trinity. The table below shows the specification and the models: 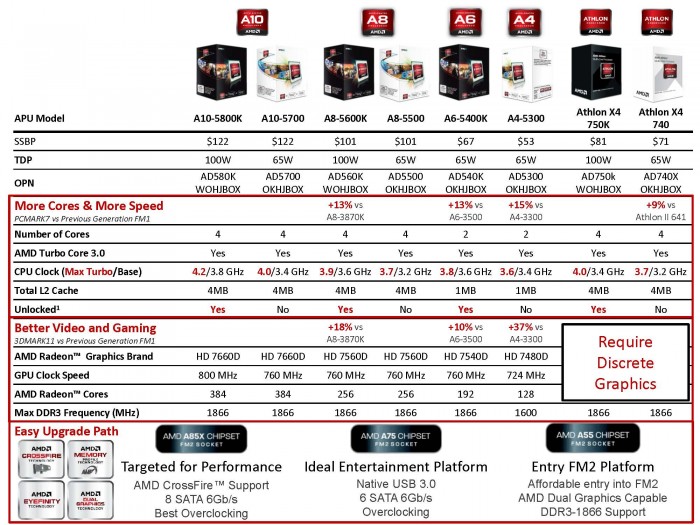 Desktop Trinity will either be 65W or 100W TDP. Unlike what Intel has done with Ivy Bridge by lowering the maximum TDP, AMD chose to deliver higher performance while maintaining the same TDP as Llano. Given the size of the die and the amount of transistors, we can understand why AMD is unable to lower the TDP, especially since both Trinity and Llano are based on the same 32nm die. Hopefully we will see lower TDP once AMD shifts to the 28 nm fabrication process.

In addition to the A series APU, AMD also brings back the Athlon branding. The difference between the Athlon and the A series APU is appreantly the lack of the integrated GPU. Other than that, the turbo core is still supported and it still comes with either four cores or two cores configuration. There is even an K model for overclockers. One thing to note here though because the Athlon models lack the integrated GPU, they will not have the VCE and the UVD3 support.

For consumers, AMD’s nomenclature created a little bit confusion. First, although the GPU on the Trinity is based on the HD 6000 GPU, it is branded as 7000. Making the matter a little worse, these APUs will also able to run AMD Dual GPU with the 6000 graphic cards. Additionally, the same chipset naming can be slightly confusing when shipping for a new board. This is not as big of an issue if you just watch out for a board that is socket FM2 compatible as opposed to FM1 when shopping for a board that will work with Trinity. Obviously, non-tech savvy individuals may not care much about the numbering scheme and branding, so we do wish AMD could make it easier for consumers to identify their various products and their compatibility.