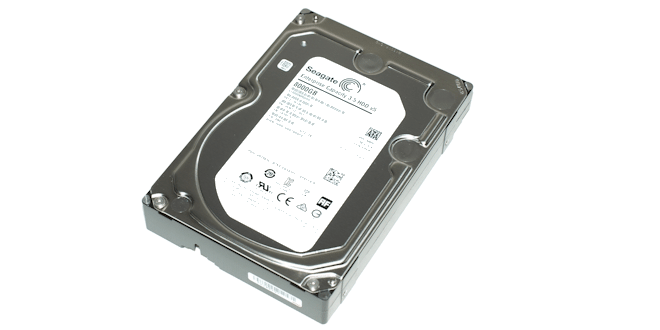 Being an Enterprise Class Drive the 8TB Seagate drive we have literally kicks all the platter drives we have, on hand, to death throws dirt on them in the grave, then stands there and calls them names. It’s a bit of a dilemma being the only Enterprise drive in the lab so it’s not really fair to compare to consumer desktop drives. Then we don’t compare any platters to any SSD’s it’s all just to apples and oranges for us so we are presenting the Seagate 8 TB Enterprise Capacity as a stand alone and we believe after you see the eye-popping performance you’ll understand why. We are spoiled for life now and convinced Enterprise class platters are the way to go. Stick a 240GB or 480GB SSD up front then this beauty behind it and you’ll have all the speed and storage you can dream of for a home desktop. 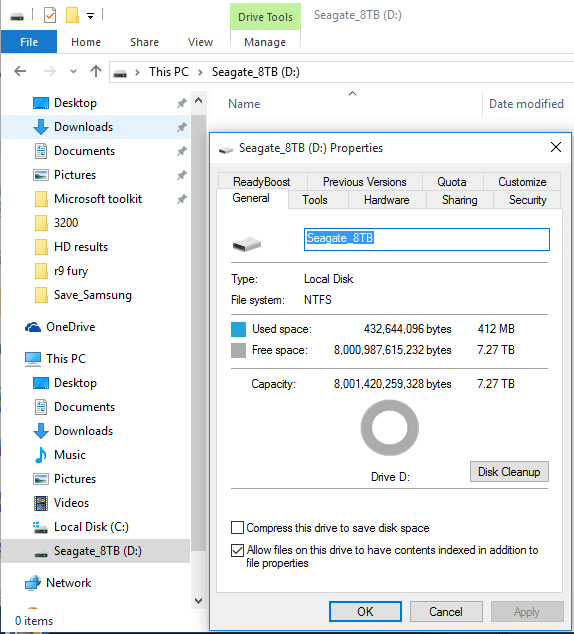 We don’t normally include a shot of the properties window on a hard drive but the Seagate 8TB Enterprise Capacity HD is worthy of a picture of the properties simply because it’s such an eye-popping size. there’s 8,001,420,259,328 bytes which is just a mind-boggling number so lets plug it into Google and see what pops up. 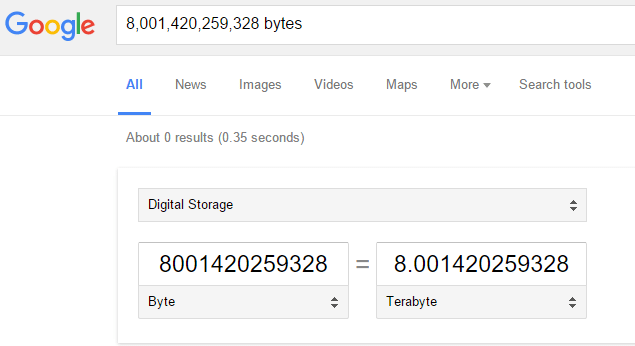 Simply type the number into Google and you get a digital storage converter that shows the capacity at 8.001TB so that’s approximately 8 Trillion bytes which translates to one large smile when you see the capacity on your own gaming shrine. 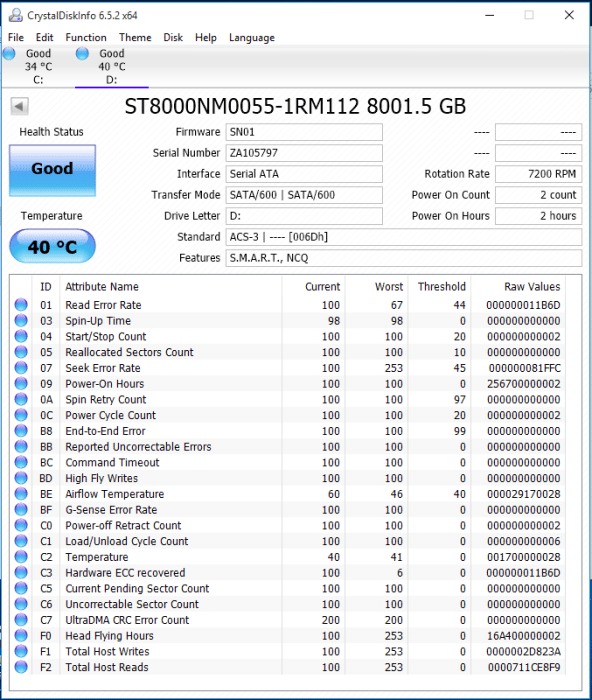 Here’s the CrystalDiskInfo shot showing the characteristics of the drive and that it is indeed the Seagate 8TB Enterprise capacity HD and from the looks of it everything is as it should be confirming that it is a 7200RPM drive and has a SATA 6Gb interface. 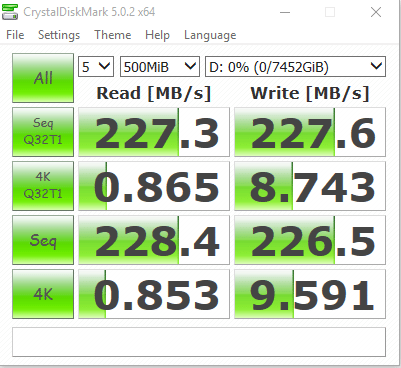 CrystalDIskMark shows a Sequential Q32Ti read speed of 227.3MB/s and a write of 227.6MB/s which is pretty consistent with the previous tests and the straight sequential test shows much the same at 228.4MB/s read and 226.5MB/s on write. The 4K test is brutal and shows 0.865MB/s read and 8.743MB/s write. Now normal desktop users really aren’t concerned much about small 4K writes but businesses are as date tends to come in small portions.  Often the data being recorded is small but important information and the 8ms access time and 4K read write speeds come into play thousands of times a day (think bank for instance). That makes the 100% faster random read write aspect of the Seagate 8TB Enterprise Capacity HD extremely important and you start to get a picture of how important and how well-engineered the drive really is. You might say that the Seagate 8TB Enterprise Capacity HD is a quantum leap over previous generations of drives. 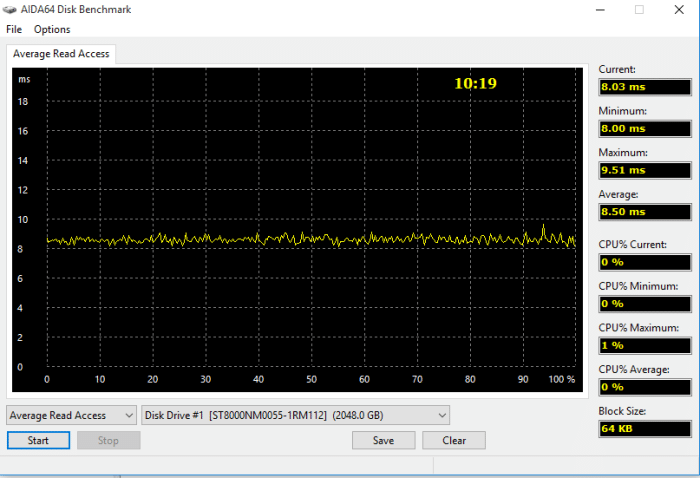 To start off with lets look at AIDA64 and the Seagate 8TB Enterprise Capacity HD’s average read access time. Our Minimum access time is 8ms, the maximum is 9.51ms and the average is 8.50 and that explains why the drives response time seemed so snappy during testing. During this part of AIDA64 the drive barely utilized the CPU and use ran below 1% up to 1%  and overall the read access time is really good for a platter drive. 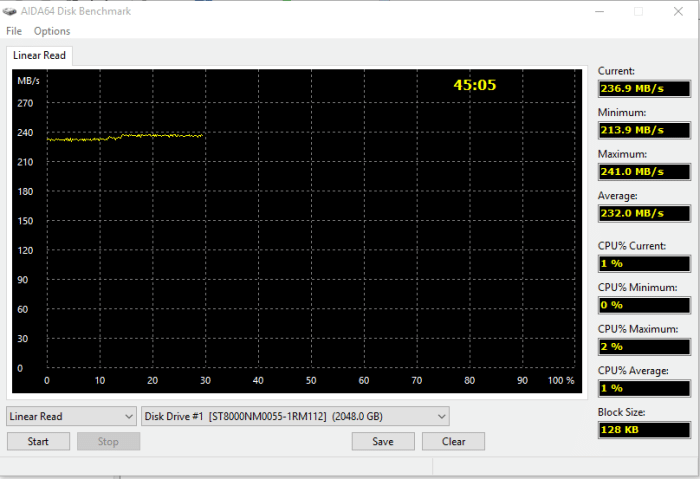 Linear read we ran a 45 minute run in AIDA64 and the Seagate 8TB Enterprise Capacity HD’s performance ran at an average of 232MB/s with a maximum of 2% CPU utilization and we were using a 128 KB block size and already we are liking this drives speed and consistency. Speed like that you could just mount the Seagate 8TB Enterprise Capacity HD and forget about a SSD for a boot drive and hardly miss the SSD. 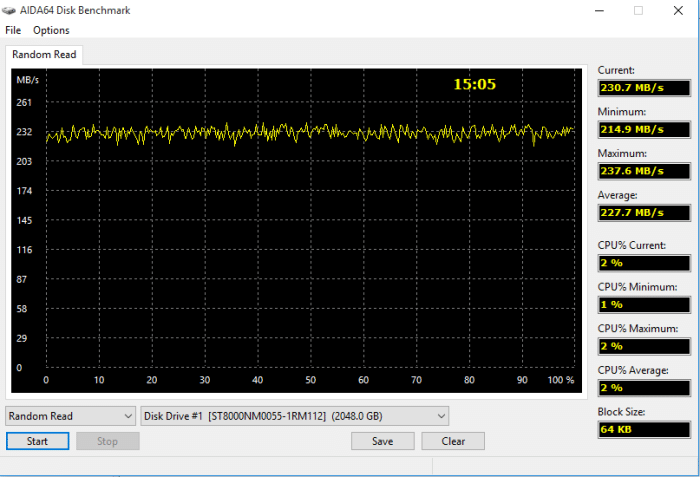 The Random Read test in AIDA64 uses a 64KB block size an our average speed runs at 227MB/s and maxed out at the advertised maximum of 237MB/s. Frankly if you had ask us a couple of years ago if hard drives wold ever be this fast we would have said no yet there it is speeds over 200MB/s consistently with a CPU utilization of 2%. 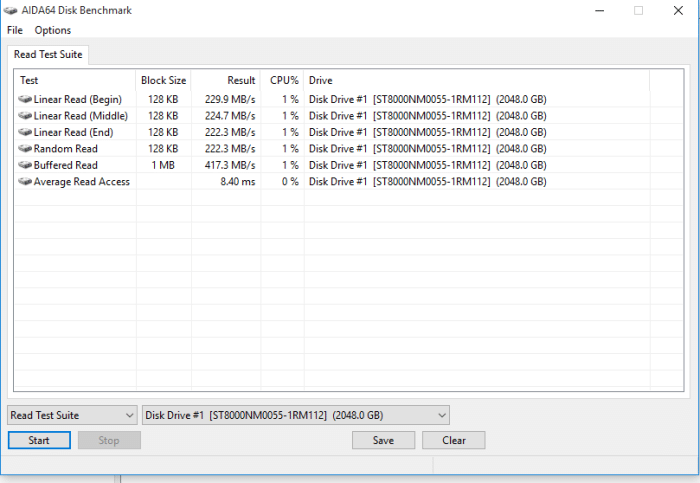