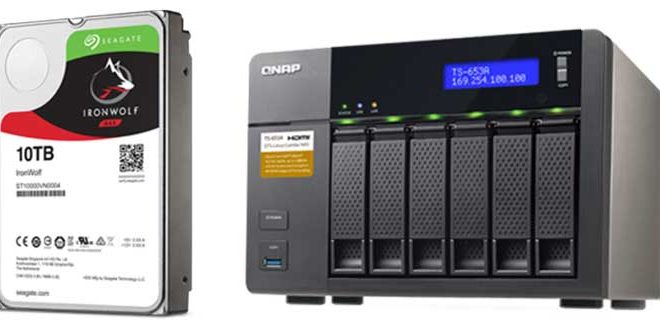 The Seagate Guardian Series brings a massive 10TB of storage space in the 3.5’’ form factor. The Guardian Series from Seagate features a total of four lines of products targeted at various marketing segments: the Barracuda Pro for gamers, the Skyhawk for surveillance systems, the FireCuda for the mobile market, and the Ironwolf for NAS.

The table below summarizes the specification for the three 10TB models in the Guardian series. The Barracuda Pro, Ironwolf, and Skyhawk most likely shared the same internal hardware components since the specifications are pretty much identical across all three drives. They all feature 7200 RPM speeds, 7 heads and 14 disks, 256MB of cache, and support the SATA III (6 Gbps) interface. The difference between them is primarily the firmware and cache subsystem where the Barracuda Pro features multi-cache technology. Additionally, the Skyhawk and the Ironwolf probably have gone through more rigorous testing for the type of workloads they are designed for. As we can see, the Barracuda Pro is rated to operate up to 60ºC, while the Ironwolf and the Skywolf are able to operate up to 70ºC. Additionally, the Ironwolf has twice the load and unload cycle than either the Skyhawk or the Barracuda Pro.

We have previously reviewed the Skyhawk and the Barracuda Pro and today, we will be taking a closer look at the Ironwolf.

Compared to a typical desktop that often operates 8 to 10 hours a day, most NAS systems operate 24/7. Additionally, most NAS systems are compact in size, and in the form factor of either tower or rackmount, which often means limited airflow. Thus, while a typical hard drive can work in a NAS system, hard drive manufacturers all have a dedicated line of drives designed specifically for NAS use. These NAS drives often have more rigorous testing and many of them are server grade drives drive or slight modified server drives. Many of the NAS drives feature technology such as rotational vibration sensor and improved RAID support that is found on server drives and have fine-tuned firmware to help maintain the drive’s temperature and stability in order to deliver best performance. 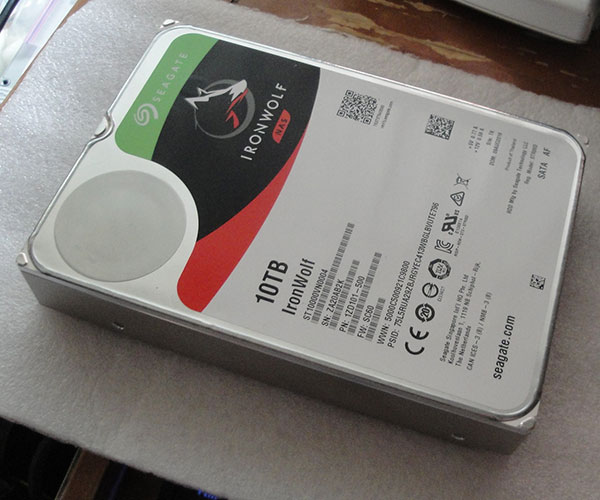 The Seagate Ironwolf is based on the same 10TB Helium-filled drive like the other members of the Guardian family. Helium is much less dense than air which means that it produces less drags and allows the hard drives to operate at lower power. It also allows the hard drive manufacturers to pack more platters (7 as it is on our 10TB drive) than traditional air filled drives. Because of the lower resistance, the drive head can also positioned more accurately to improve data reliability. The reduction of drag would also translate to cooler drive as less friction leads to less power loss and heat generated.

What makes the drive special is that it comes with these following features:

As you can see, the Ironwolf features the AgileArray technology, RV (rotational vibration) sensor, and power management to save energy. The RV (rotational vibration) sensor is worth mentioning here as it is a feature that is often found on Seagate’s enterprise drives like the Constellation. The RV sensor helps to minimize the impact of vibration on the system. This feature would help the tightly packed NAS drives to perform optimally and reliably as it helps to minimize the effect of turbulence. Seagate recommends that systems that use five or more drives to have such sensors onboard in the past but now we see that the top model in the Ironwolf lineup has it as a standard feature.

With the Ironwolf, Seagate offers two lines of products: the Ironwold and Ironwolf Pro. Seagate segmented the standard Ironwolf for the connected home, SOHO, and SMB market for up to 8 drive bay NAS devices, whereas the Ironwolf Pro is for commercial and enterprise NAS system as it is capable of supporting up to 16 bay NAS devices. The non-pro version is rated for 180TB/year user workload and carries a 3-year warranty. Moving up to the Pro model provides the drive a higher workload rate of 300 TB/year.

The Pro model also comes with two additional years of warranty and two years of Seagate Rescue service as a standard. Users who purchase the non-Pro model can purchase the Rescue at $4.99 for one year coverage. Additional years (up to two years) can be purchased at $5 per year. Seagate now even offers a family plan that covers up to five drives for two years and three year data recovery.

Seagate’s Rescue Plan provides data recovery in the case the drive failed. According to Seagate, the rescue plan even covers the shipping costs for both ways. We think this is a small investment for anyone who does not have a habit of doing routine backups.

Additional differences between the standard Ironwolf and the Ironwolf Pro would be the storage capacity. The non-pro version is available in storage capacities from 1TB up to 10TB. However, only the 4TB, 6TB, 8TB, and 10TB drive features rotational vibration sensors. The Pro models starts at 2TB of storage space and goes up to 10TB and all of them come with the rotational vibration sensors. The retail price for the 10TB model Ironwolf is $369.99, whereas the Ironwolf Pro will set you back to $444.99, or $80 more. For $80 more, we get two additional years warranty, higher workload rating, and 2 year of data rescue service.

Seagate Ironwolf is designed specifically for NAS and storage system that need the best performance and low CPU usage. The drive is backed with Rotational Vibration sensor and Seagate's AgileArray technology that aim to stabilize the drive for optimal performance.