QNAP has always been one of the companies in the NAS industry that is quick to adopt new technology and offer different products than other manufactuers. The company is the first to incorporate AMD SoC into their NAS devices (TVS-x63 NAS) and also delivers the first Android NAS (TAS-268). In fact, QNAP’s product portfolio is one of the biggest among the NAS makers where its wide range of NAS devices aimed at various market segments that includes 10+ drive bay rackmount for large corporate business to 6 and 8 bay models for SOHO, medium business, and home-users, to 1 or 2 bay entry-level personal media streaming device and file storage. If you need a NAS, QNAP certainly got one that would fit your need.

Over the last couple of years, we have seen NAS manufacturers expanding the functionality and features of their devices. The NAS is no longer just a dumb box that stores your files but it is not far more capable that can act as multi-media server, file server, backup storage, and even act as a desktop replacement. QNAP has the biggest ambition with their NAS where its QvPC technology turns the NAS into one capable machine that offers everything but the kitchen sink where it can run virtual machine and functions as desktop replacement, multimedia server, surveillance station, and more.

Of course, to handle all these tasks requires a NAS with powerful hardware and QNAP clearly is not shy in this department as the company’s NAS traditionally adopting high-performance x86 processor into their NAS with plenty of RAM to go with it. We had recently reviewed a 4-bay unit, the TVS-471, that uses Intel x86 processor with 8GB of RAM. While for home and small business user, the TVS-471 should be plenty fast. If you need more storage option or need higher performance, the next series that you would want to check out would be the TVS-x82. 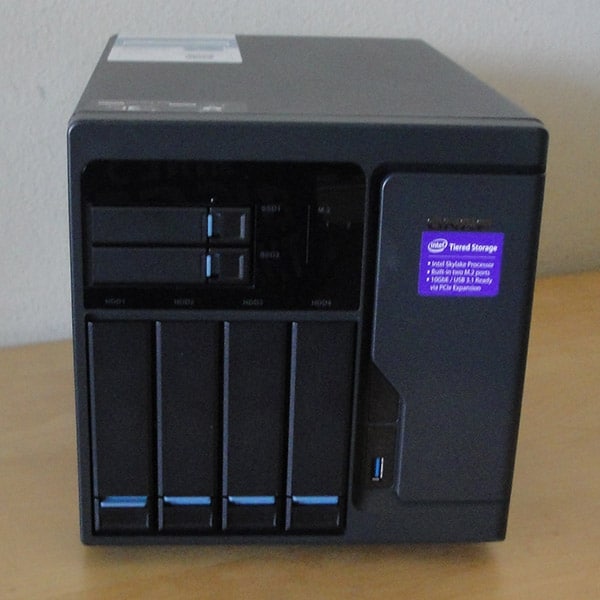 There are two series in QNAP’s high-performance and high power NAS: the TVS-x82 and the TVS-x82T. Both series are packed with high performance hardware where the main differences are that the “T” models comes with Thunderbolt 2 port and integrated 10 Gigabit Ethernet port. No doubt, the “x82T” series is aimed to deliver the fastest transfer speed with 20 Gbps bandwidth offered by the Thunderbolt port and ten times the speed offered by the Gigabit Ethernet port. As expected, however, that the additional performance is not cheap as the cheapest 6 bay model, the TVS-682T, will set you back to $1899. Luckily, QNAP’s TVS-x82 series delivers the same internal as the TVS-x82T minus the Thunderbolt port and the 10 GbE Ethernet port. While the TVS-x82 is still not cheap, it can serve as great alternative for those who is not ready to jump into Thunderbolt and the 10 Gbe and save $600 as the TVS-682 is retailed at $1299. There is always an option to add either ports via an expansion card.

As you can see the compare the three 6-bay performance NAS models from QNAP, the x82 models features the Intel 6th generation processor and 4 memory slot for supporting up to 32GB. While the x71 is no slouch, it uses 4th generation processor with support for only two memory slots for up to 16GB of RAM. The 6th generation Intel processor is built with 14nm process with additional performance improvement and lower power consumption. Interestingly, while the x71 starts with the Pentium processor as the base model and has the ability to go with Core i3 or Core i5 processor, the x82 is only available with Pentium or the Core i3 processor for the 6-bay unit. QNAP reserves the Core i5 and i7 for the 8-bay or the 12 bay model where the Core i5-6500 is available for the 8-bay and the 12-bay and Core i7-6700 is available for the 12 bay model. QNAP limits the processor selection for the x82T where the 6 bay model only comes with Core i3 and the Core i5 is reserved for the 8-bay model and the 12-bay model with the 12-bay model can also choose the Core i7 6700. The RAM configuration also differ as the x71 comes with 4G of 8G of memory whereas the x82 and x82T are paired with 8GB of memory as standard.

Let take a closer attention at the models with the i3 processor. We can see that the x71 paired with the Core i3-4150, a 54W dual-core processor clocked at 3.5GHz. The x82/x82T’s uses Core i3-6100, again a dual core but slightly more efficient at 51W and higher clock at 3.7GHz. The graphic also gets a slightly bump as the i3-6100 features Intel HD 530 based on GT2 architecture with 24 processing unit clocked at 350Mhz base and 1.15 GHz max. The i3-4150, on the other hand, uses Intel HD 4400 that is also based on the same GT2 architecture but with 20 processing unit clocked at 300 and 1GHz. Not only that we get the performance bump with the Core i3 6100, the new processor also brings DX12 support, three monitor support, and 4K display support with HDMI 1.4 support up to resolution of 4092×[email protected], and DisplayPort 2.0 support up to resolution of 4096×[email protected] The older GPU only supports DirectX 11 and while it also supports three display and 4K, it is limited to 4096×[email protected] via HDMI and 3840×[email protected] via DP.

Ports selection also differs between the models. The x71 comes with just single HDMI port but the x82/x82T comes with two HDMI 1.4 and one HDMI 2.0. The number of USB ports on the x71 are five (three 3.0 and two 2.0) whereas the x82/x82T also has five USB ports that all 3.0. All models come with four Gigabit Ethernet port and as mentioned, the x82T goes beyond that with two additional 10 GbE ports as standard. Additionally, the x82T also has two Thunderbolt 2.0 via an add-on card.

In fact, all three models do come with PCIe slot for add-on cards. Where as the TVS-x82T have both slots pre-installed for the 10 GbE and the Thunderbolt add-on card, the TVS-x82 and the TVS-x71 have these slots empty. Despite the fact that users are able to install add-on card, bandwidth can be a limitation in terms of performance. The older Intel processor found in the x71 supports PCIe Gen 3 x8 and Gen 2 x4 configuration whereas the new processor in the x82/x82T bumped that to Gen 3 x16 and Gen 3 x4. This means that the total bandwidth offered by the x82 is 16 GB/s for the x16 slot and 4 GB/s for the x4 slot whereas the x71 can only deliver 8 GB/s for the x8 slot and 2 GB/s for the x4 slot. The reduced bandwidth on the x71 potentially can pose bottleneck as a single 10 GbE has a maximum throughput of 1.25 GB/s. So while single port is not going to be any issue, if you are teaming multiple ports, you could run into bottleneck issue.

The biggest kicker is that the X71’s Thunderbolt actually travels through the Intel’s Direct Media Interface (DMI) which limits the bandwidth to 2GB/s whereas Thunderbolt 2.0 has maximum transfer rate of 2.5 GB/s. Thus, with the X71, you won’t be able to reach the full transfer speed while the x82 has the Thunderbolt directly connect to the CPU’s PCIe so you would be able to reach the maximum transfer speed that the PCIe x16. Thus, the x82 is definitely a far better choice not just for Thunderbolt 2.0 but also 3.0 add-on card, which is yet to be available but once it does, it would bring a healthy speed bum to 5 GB/s and USB Type C connector support. Additionally, since the PCIe is hooked to the CPU directly, the x82 also supports GPGPU application with a video card add-on, which the x71 will not.

QNAP TVS-682 is a very powerful NAS packaged in a very small foot-print. It delivers all of the features found on more expensive unit at cheaper price with the ability to upgrade to 10GbE port and Thunderbolt.