Pulling the thin backplate I find a few controllers connected to the backplate via a thermal pad. The surprising part I think was a mini card with the PCB falling short by a decent margin. Then the first thing that got my attention was the question of how the 8-pin was extended to the far edge of the cooler plate. The default would likely be the same as we have seen before on the GTX 1060 which is cable leads extending the connector.

To say the RTX 2070 FE was a monumental pain in the ass to disassemble would be the understatement of the century. Once you get to this point where you have the card partially butterflied out onto my bench I realized that you could not really pull it apart any more than maybe 30 degrees before you put some serious stress on the solder joints for the 8 pin and also the multi-pin fan/LED connector. Turns out you have to remove some of the front hex screws which normally hold the fans but in this case, they also seem to secure to part of the baseplate of the cooler. 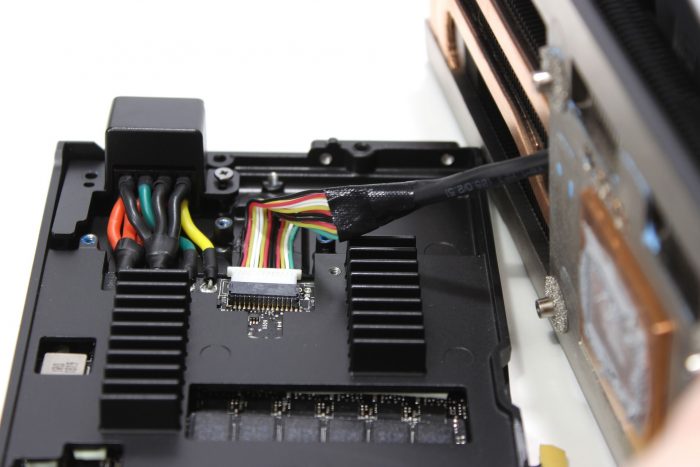 Once we got it apart we found that there was plenty of slack in the fan connector it was simply glued to the baseplate which meant the slack really didn’t give when trying to get the card apart. Do note if you do get an FE card and decide to disassemble it for any reason, pay special attention to this fan cable as it can come unplugged during reassembly and don’t want that.

Another note is you can see the cooler flipped up to the right and it definitely is a heat pipe based cooler so not a full vapor chamber like we saw on the FE higher end models. 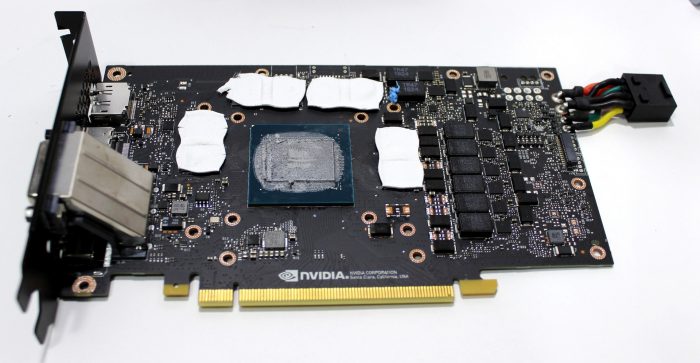 Here now with the card fully released of all brackets you can see that the PCB is quite simple or much simpler vs the 2080 and Ti models. the VRM is a 6 Phase which means we can feel pretty confident along with the single 8-pin that we won’t be pushing too awful far before exceeding the capabilities of the power we can feed this unit. Also, you can see the 8-pin fed by wires to the PCB which was a bit of a concern to me and I will explain now. 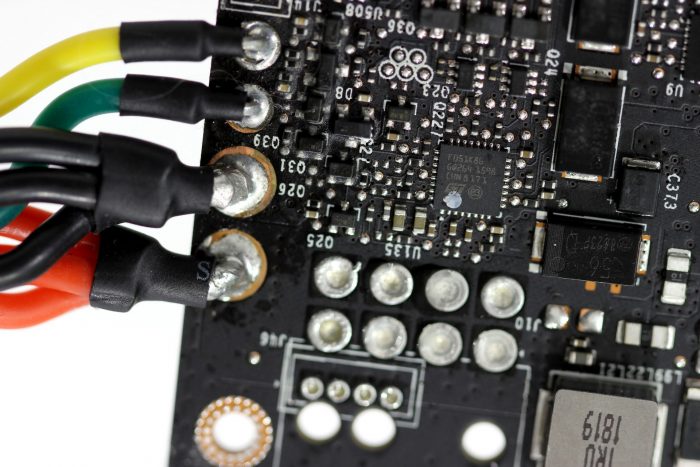 Here we see the 8 pin power feed with the 3x +12v and 3x Ground each going to a single solder point onto the board. Yes, I do know that the 1060 did the same thing but that was with a single 6-pin connector and not an 8-pin which can pass potentially double the power load. the green and yellow are actually sense pins for more advanced PSUs that have enhanced voltage regulation capabilities otherwise for other PSUs they will just be routed to ground. My issue with this kind of configuration is you are potentially feeding 150W through these single solder points where the cables are grouped together which means this can, first of all, generate some heat but the other potential issue which can foreseeably happen is if there is a fault in the solder on the ground point it could potentially force all of the 8-pin power to the PCIe slot itself. The PCIe slot is made for approx 75W although it can likely take more I don’t think it would like taking the brunt of a PCIe 8-pin ground failure and having to handle that loading. What is even more strange is with the card being mini and we now know that it is not a full vapor chamber cooler the fin stack could have been clearanced to allow a top feeding 8 pin similar to the 2080 and 2080 Ti models. the 8 pin connector which you can use it literally 3mm from the grouped +12V cables solder point so it could have been done rather easily and been a much more stable and reliable implementation.

The last point of contention on this design is liquid cooling. The power connector hanging there without the built-in support would be very risky to liquid cool which means Nvidia pretty much omitted this card from being a liquid cooling candidate as just plugging in a PCIe power connector into this connector without its stock supports in place could put stress on those solder joints. 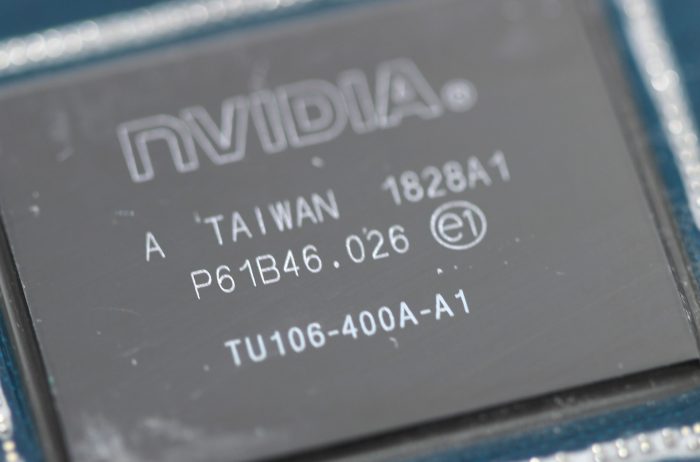 Here is the TU106 die, it is noticeably smaller than it RTX powered bigger brothers and understandably so as it has much less going on under the hood with only 3 GPCs. the total die size is 445 mm² whereas the RTX 2080 comes in at 545 mm² and the monolithic RTX 2080 Ti tops out at 754 mm² 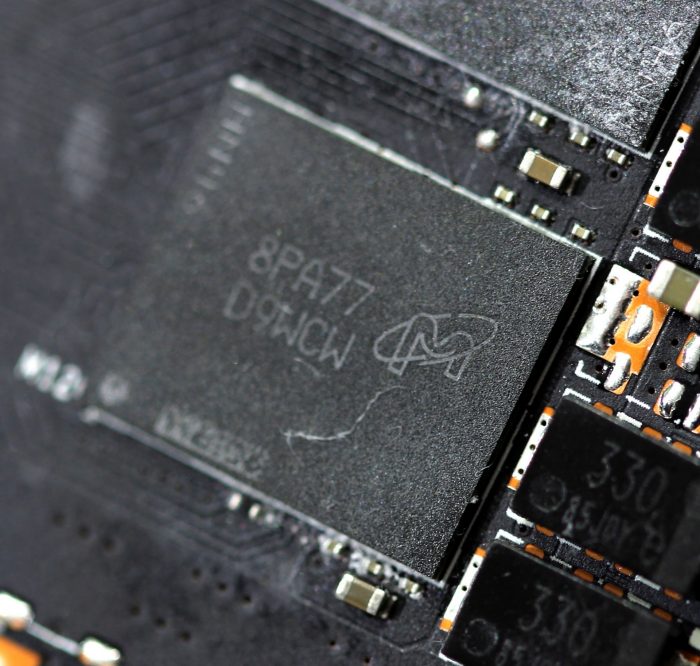 Here you see the Micron GDDR6 modules which are 1GB per IC Spec’d at 7000MHz (14000MHz effective data rate) and are the same as we saw on the other two RTX cards so hypothetically we should see similar overclock capabilities for overclocks on the VRAM as we saw previously. 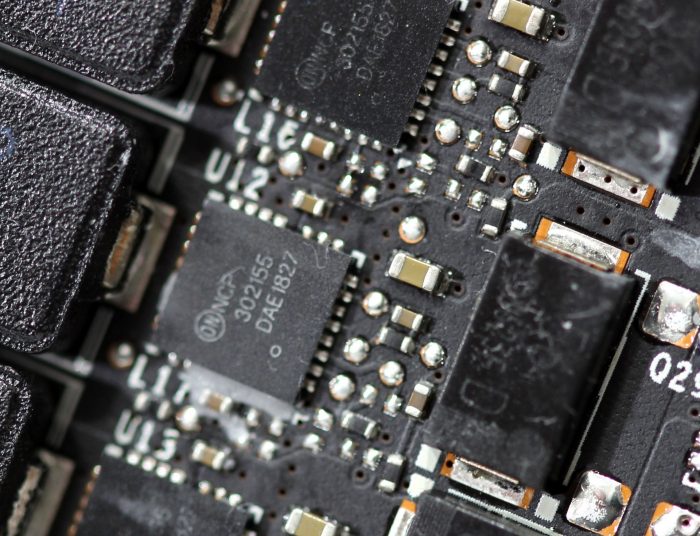 the power stages on the RTX 20709 are On Semiconductor NCP302155 which are 55A optimal units which is a bit of a step down from the units we saw on the RTX 2080/2080 Ti. This is obviously a price play to ensure they can hit a very specific price target. 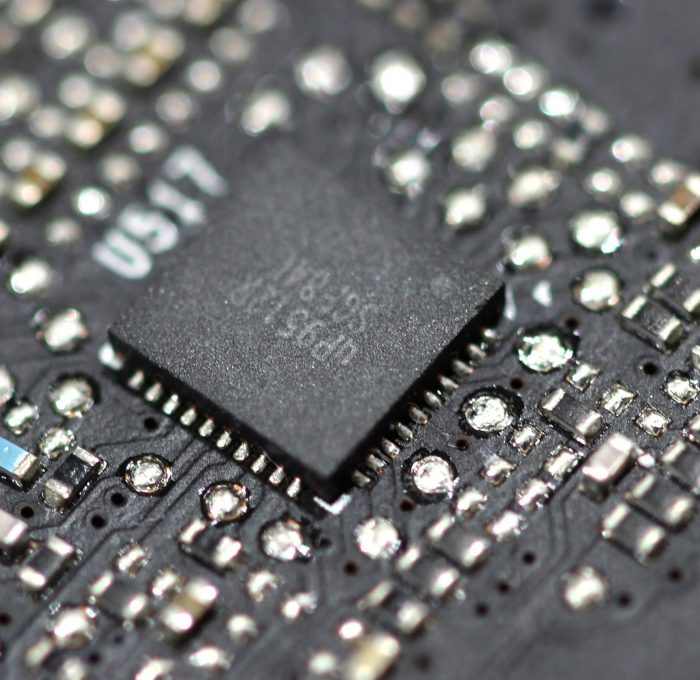 The voltage control for the GPU is handled by a uP9512R and can work up to 8 phases but in this case, it is simply put to work on the 6 phases for VGPU which the RTX  2070 offers. The VMEM is controlled by the uP1666Q which I, unfortunately, could not get a good shot of as it is very small. 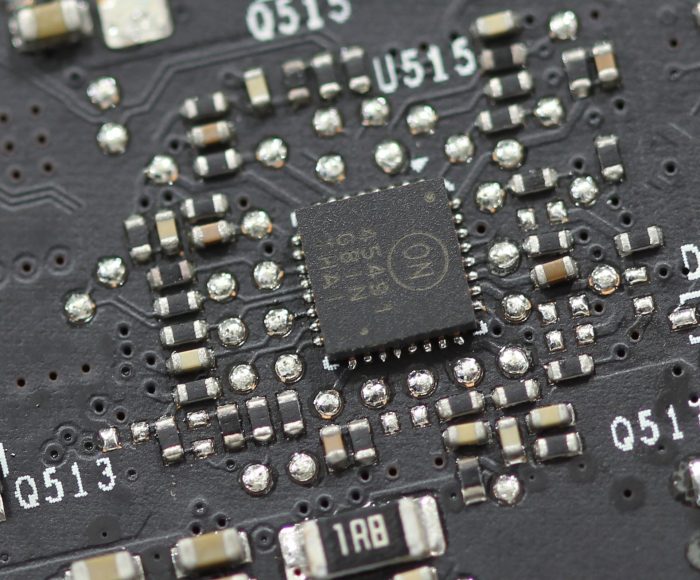 To round out some of the onboard components, the Shunt monitoring is handled by ON Semiconductor NCP45491 which means if you were to want to mod the card for a higher power limit you would likely want to just mod the shunt via stacking on top of the shunt resistor rather than trying to solder onto this unit as it would not be a fun adventure.

One thing to note is that if you do plan to get an FE card for whatever reason and want more power at least you have the non-utilized 8 pin pad spot you can add a 2nd connector to for supplemental power although I’m not really sure how much power this VRM, as it stands, could really push and am not sure this could be the card to pick if you’re planning such activities. I’m sure for 2070 benching there will be far more capable models coming out from other AIBs.