Now lets talk nerd candy. You can buy a cut back, no frills, GTX 1070 and save a few bucks, or you can go for the gusto and grab a top-of-the-line ASUS ROG model. The ASUS Strix GTX 1070 features a base clock of 1632 MHz and a boost clock of 1835 MHz which is amazingly high compared to last generation’d Maxwell GPUs. You can attribute the higher clocks to a refined 16nm FinFet manufacturing process allowing 7.2 billion transistors on a 314mm² die. Along with the 7.2 billion transistors there’s the 1920 shading units (Cuda Cores), 120 TMU’s, 64 Rops, 15 SM’s, 8GB of refined GDDR5 running at an effective clock of 8000MHz running across a 256-bit memory bus which adds up to one large lump of nerd lust. Yes, it’s the cut down model of the GTX 1080, but not everyone has roughly $650 to spend for the 1080 and the $448 MSRP is high enough for a lot of serious enthusiasts.

Giving the ASUS ROG Strix GeForce GTX 1070 8GB of GDDR5, it’s easy to see that this is a card built for 4K gaming and video playback. 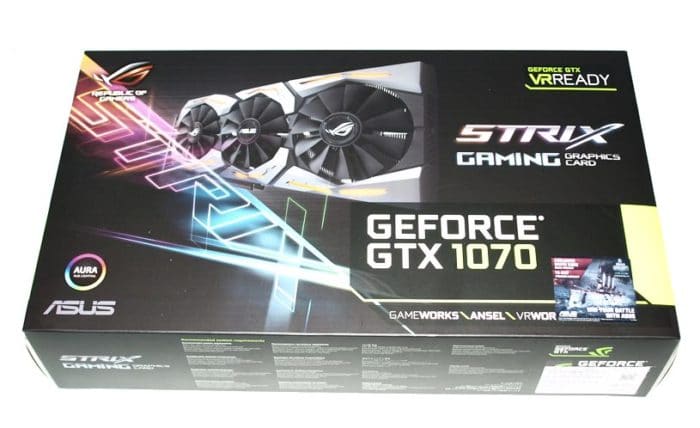 Now that we covered the generic GTX 1070 specifications and pricing, lets look at the ASUS specific goodies for a minute.  The factory-overclocked core comes in at 1632 MHz compared to the 1506 MHz clock on the reference models, so you get a factory OC of 126 MHz on the non-boost speed. The boost speed is phenomenal at 1835 MHz and with the DirectCU III with Patented Wing-Blade Fans for 30% cooler and 3X quieter performance, you’re looking at a premium video card. There’s a new and exciting feature called ASUS FanConnect, which is a pair of GPU-mounted fan headers that are PWM controlled by the GPU for optimal thermal conditions. Think about that for a few seconds. Fans pointed over the video card, controlled by the video card, to ramp up the external fans when the GPU temps rise. That’s enough to send shivers up any enthusiast’s spine.

That brings us to the Auto-Extreme Technology with Super Alloy Power II. The Auto Extreme portion means it’s totally built by robots without human interference, for a build that’s more consistent. The Super Alloy II is a special alloy formula which is highly magnetic, heat-resistant and anti-corrosive, delivering better performance than stock materials. ASUS just doesn’t know when impressive technology is enough, and throws in Aura RBG lighting, which allows you to pick a color scheme for your video card,  personalizing it to match your likes. They also use “VR-Friendly” HDMI ports for easy setup of VR systems. VR seems to be the new technology buzz word, and specs for a VR-capable system are quite steep and out of the reach of most end users, but as technology trickles down, it becomes less expensive. For now they are saying VR is the future of gaming and it may well be, but at this fledgling stage, if you want VR you’ll pay the premium price for VR gear and a machine to run it.

Of course with the ASUS ROG Strix GeForce GTX 1070 you get GPU Tweak II and Xsplit Gamecaster that provides easy OCing and game play streaming. ASUS mentions a couple of NVIDIA technologies built into the new 10xx series like NVIDIA Ansel, a new method of capturing in-game screenshots. Ansel is the ability to take screen shots from any angle 360° around your in-game avatar. We would imagine Ansel has a lot to do with VR, as VR will require a 360° view otherwise you turn around and behind you would be a black void. NVIDIA GameWorks is a sophisticated network of easy-to-use game technologies that developers can use to make more immersive games. GameWorks gives game developers a toolbox from which they can easily develop, debug and optimize their code.