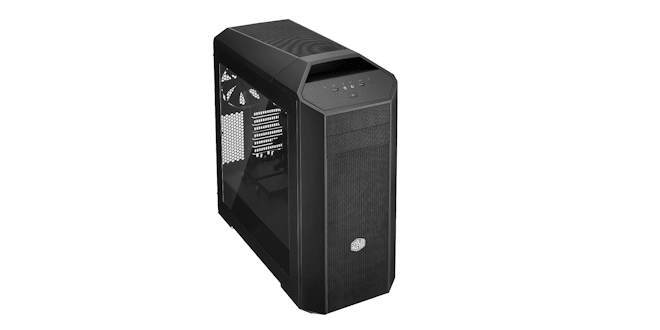 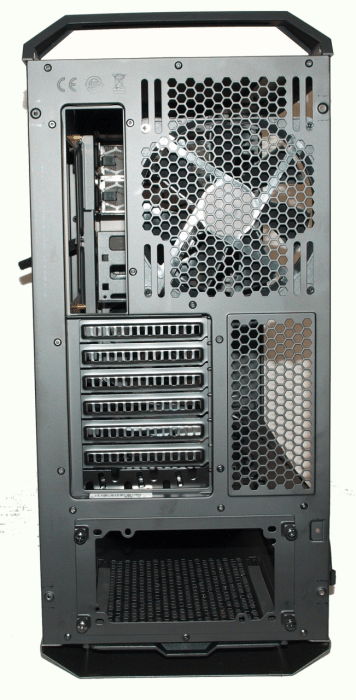 The backs of computer chassis have always been more functional than form and dictated by the components inside but Cooler Master has managed to slip one little trick into the rear of the chassis. Then rear exhaust fan can be re-positioned with the screws fitting into slots rather than holes which should give you some kind of hint of the modularity of the whole MasterCase chassis system. Something that almost slipped by us is the thumb screws which actually hold the PSU mounting plate in place. You can pop that plate out mount the PSU to it then slide the PSU in and fasten it into place using the thumb screws. PSU positioning is actually one of our pet peeves, getting some of them in place without scratching the powder coating on some chassis is like playing the old “Operation” game. The fit on PSU can be so tight some paint gets scraped and the removable plate seen here should allow you to avoid all that. 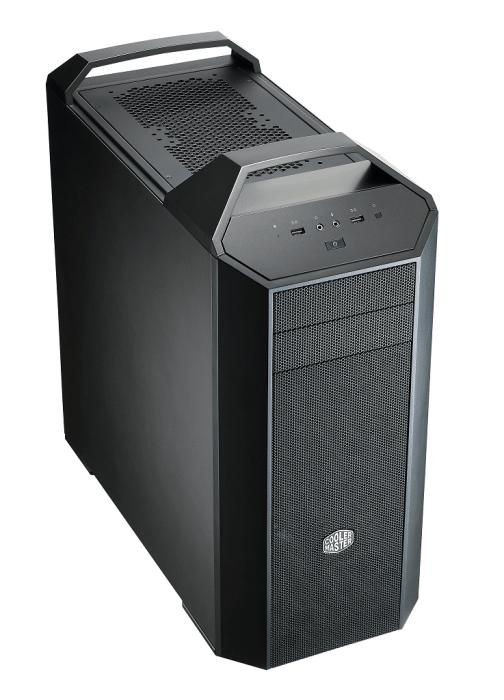 The front of the MasterCase 5 is removable by clips inside the chassis itself and you find a fan tucked away in there with the same movement capabilities of the rear fan, Just loosen 4 screws and you can move it up or down to meet your airflow and wiring needs. 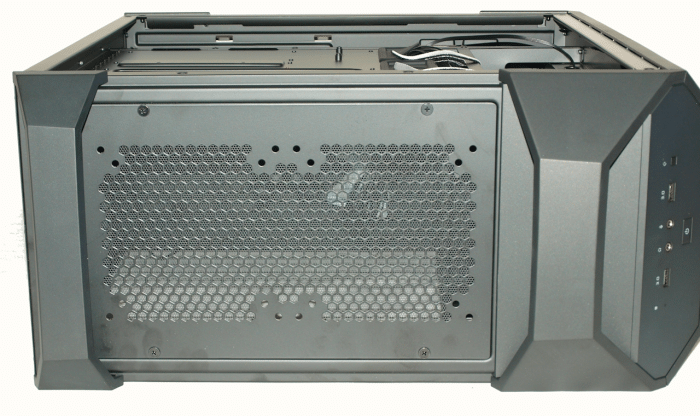 Take a look at the top of the MasterCase 5 and you’ll notice it’s fitted for a couple of fans but not really conducive to a dual radiator cooling system. The problem with the tops of most chassis is just that there’s simply no room on the interior for a dual radiator cooling system. You can fit 120mm and 140mm fans there but in most cases the radiator will descend to far into the chassis and interfere with the motherboard. Cooler Master has that covered. 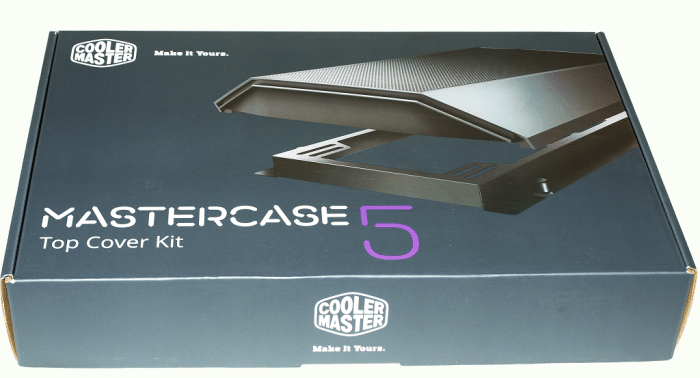 That’s the beauty of the MasterCase 5 you can add-on a top cover kit. remove the mesh on top the chassis and install the Top Cover Kit. 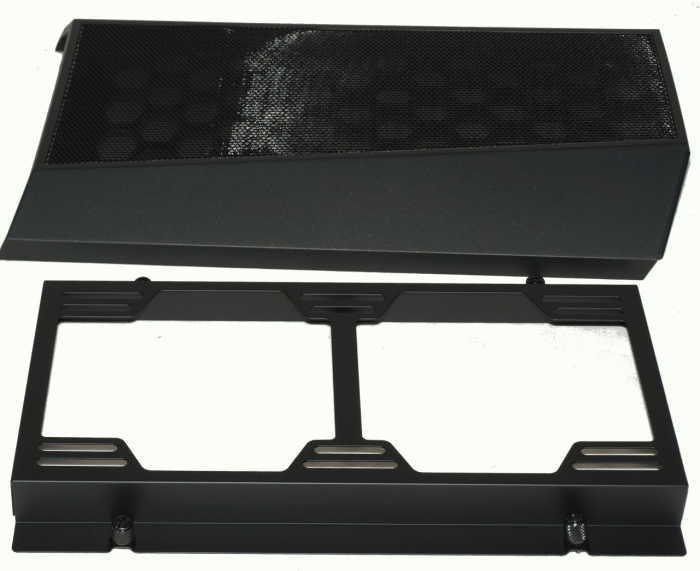 The Top Cover Kit is a raised frame designed for a dual radiator cooling kit then to keep everything nice and clean a cover that goes over the top of the water cooler. The same sliding fan setup used on the front and rear fans is deployed here and if you’ve ever had to fight for that extra 1/4″ you couldn’t get you will really appreciate the wiggle room you get from the fans on this Free Form Chassis.

So we have been talking modularity so lets just get this shock out-of-the-way. 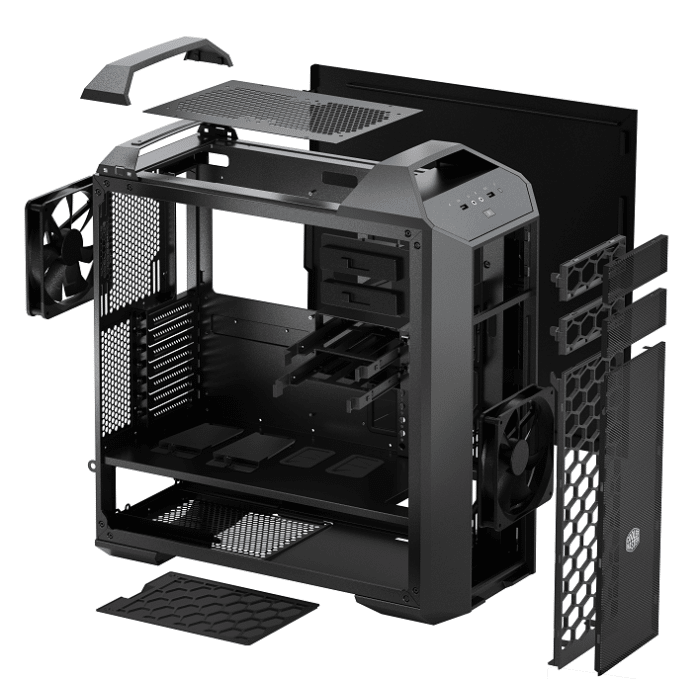 Here’s how modular this chassis really is. The front can come off then full filters on the front of the chassis can be removed then the front grill itself. There’s a removable filter on the bottom, the rear handle can be removed, and the screen on top can be removed for cleaning or for installing the Top Cover Kit. 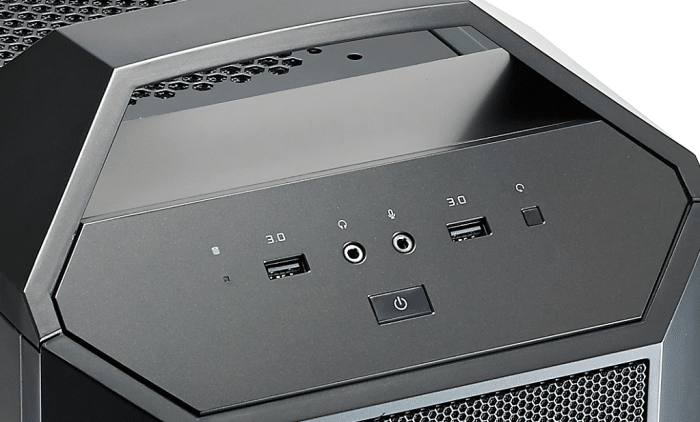 The front shows two USB 3.0 a hard drive light, earphone and ear phone jacks a reset switch and a power switch. We would have liked to have seen a covered USB 3.1 top panel connector as USB 3.1 has landed and you better believe soon you’ll be seeing it on front panels.  In all the top panel is sleek and functional but positioned as it is dust will collect in the ports and will have to be blown out regularly so on a case of this magnitude plastic port covers wouldn’t hurt our feelings. 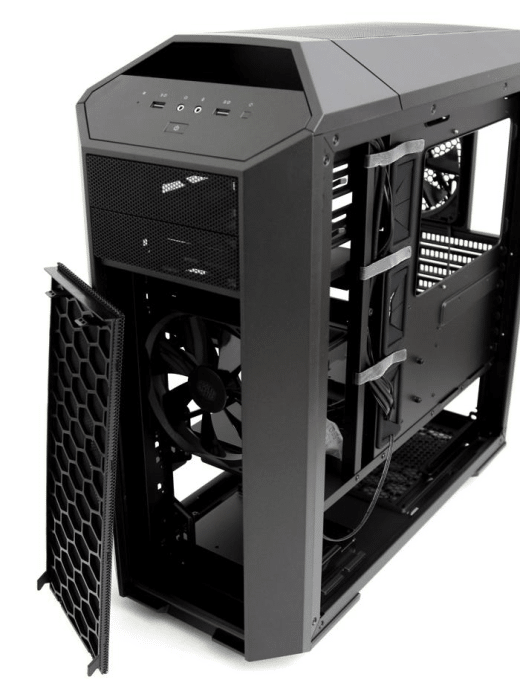 You can see the front panel is modular as well and the bottom can be removed and the 5 1/2′ drive bays have separate filter covers. On the backside of the chassis it’s hard for you to see but Cooler Master is the first company we have seen that leaves a deeper opening between the door and the motherboard tray allowing for easier cabling without having to bulge the door.

The Cooler Master MasterCase 5 and the available modification kits along with it's free form design make for an easy to wire chassis that is sure to turn heads.