Share
The GTX 980 Ti is not only a fast GPU but also a GPU that overclocks extremely well. This means that few cards for sale actually are running at reference speeds, 1000 Mhz,  and instead are overclocked at different levels. Zotac are no strangers to overclocking usually offering a wide variety of cards for each generation. Their AMP!-edition cards not only are overclocked but come with their own special cooler and thus when we got a question whether we wanted to review one of their GTX 980 Ti AMP!-cards we jumped to the chance, especially as it turned out to be the Zotac GTX 980 Ti AMP! Extreme-card. With a base core clock of 1253 MHz, 25.3% higher than a reference GTX 980 TI, this is so far the highest clocked GTX 980 Ti we’ve seen from any OEM. And just to whet your appetite, the card even overclocks further! Add to that 6 GB of DDR5 memory running at 7220 MHz (up from 7010 MHz) and a special silent tri-fan cooler (IceStorm – love the names) and it is clear that this on paper is the “king of GTX 980 Ti”. Can it deliver on its promises? Read on to find out.

The Zotac GTX 980 Ti AMP! Extreme stands out with its massive 25.3% overclock against the standard GTX 980 Ti.

Zotac offers 5 different GTX 980 Ti-cards (we left out the 5th, the AMP! Omega, from the comparison below). 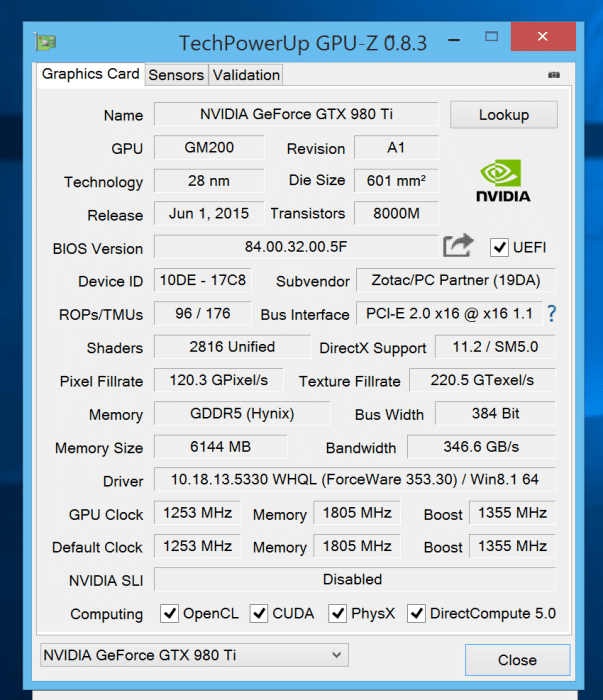 While the other cards are midly overclocked the Zotac GTX 980 Ti AMP! Extreme stands out with its massive 25.3% overclock against the standard GTX 980 Ti. The GPU is cooled with a special tri-fan cooler that promises to keep the card cool while being whisper quiet.

For this card Zotac is selecting only the “finest” GTX 980 Ti-GPU’s and paired them with a impressive massive cooler. The result? A huge card that offer promises for even faster speeds.