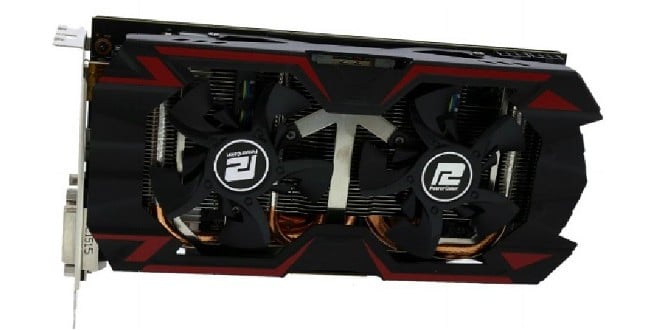 The PowerColor PCS+ R9 380 4G is a bargain in graphics choices that you seldom see. It beat the GTX 960 pack easily and while GTX 960 has 2G of GDDR5 running

across a 128 Bit bus the PowerColor PCS+ R9 380 4G has 4G of GDDR5 running across a 256 bit bus. To top off the bus and memory advantage the R9 380 series is DirectX 12 ready and comes with the entire host of AMD technology packed into a budget friendly GPU.

The PowerColor PCS R9 380 4G is hooked up with a Factory OC of 980MHz and has headroom for more OC, performs nicely on the charts and runs whisper quiet. People who have been around graphics cards long enough will remember the graphics cards of 5 years ago when some of them sounded like a car supercharger when the fan kicked on high. It’s no fun running and gunning your favorite game next to a wind tunnel but the PCS+ thermal design was pleasingly quiet even during graphically demanding games.

The open design on the cowling of the PowerColor card lets heat escape easily to be whisked away by the airflow in your chassis and exhausts heat from the I/O panel as well. We have no Love lost for closed cowling designs that exhaust 90% of their heat through the small I/O exhaust. The heat generated at the exhaust was one of the things we used to measure and it would be unpleasantly hot, heating the GPU connectors and cabling to the monitors wasn’t doing any favors for good graphics. PowerColor sees that and any heat generated is spread across their 5 heat pipes and out the generous dual heatsink.

As everyone knows this is still a Tonga Core and the same basic core as R9 285 but face facts this core gives GTX 960 a run for its money and beats it in Bus width and GDDR5 memory at an entirely competitive price. AMD and PowerColor packed enough technology around the R9 380 to make it worthwhile to upgrade if you need to get to DirectX 12 and have enough GDDR5 to game at higher resolutions effectively.

We like the PowerColor PCS+ R9 380 4G for a variety of reasons, price, performance, quiet operation, bus width and of course a whopping 4G of GDDR5. The price and performance of the PoweColor PCS+ R9 390 combined with the plentiful 4G of GDDR5 and 256-bit bus earns it a Golden Bear Award and the XFire numbers from two of these R9 380’s just reinforces it’s worth.