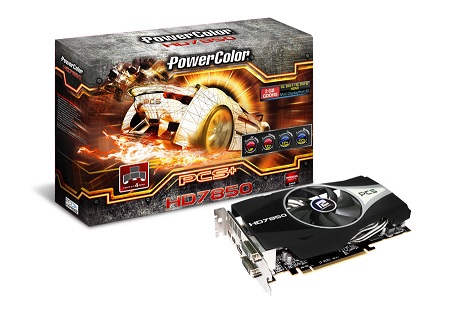 The PowerColor HD 7850 PCS+ is the fastest factory overclocked HD 7850 on the market. The card features PowerColor’s own custom cooler with 5+1+1 phase power design, DrMos and IR Digital PWM that allows enthusiasts to push it even further. And the mixture of ports and the bundle makes it one of the best HD 7850 available on the market today. Let’s check it out.

The PowerColor PCS+ stands for the Professional Cooling System as it features the company’s unique cooling technology and attractive cover design.The HD 7850 PCS+ comes with the company’s Gold Power Kr design where it uses 5+1+1 phases board power design to enhance power efficiency and stability. Additionally, DrMos and IR Digital PWM are used to minimize switching loss and maximize the power efficiency. For average consumers, it means that the card consumes less power and runs cooler and quieter. For overclockers it means that it will have a higher overclocking potential. 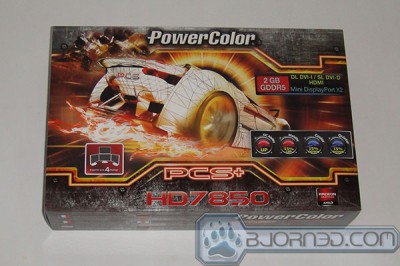 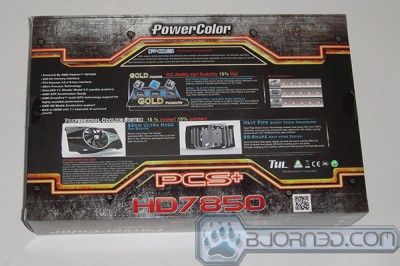 Typical fashion with the HD 7850 PCS+ box where we get plenty of marketing information highlights the various features of the card such as its custom cooler, 2GB of onboard memory, and the Eyefinity support. 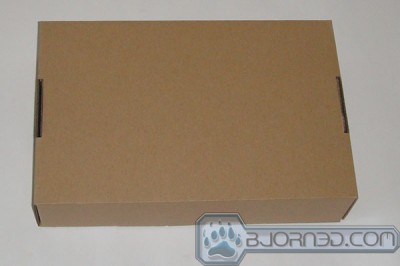 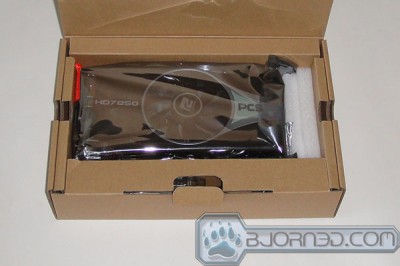 Inside,  the usual brown cardboard is used to box the card with the accessories placed on the bottom of the GPU in a separate compartment to prevent any damages during shipping. 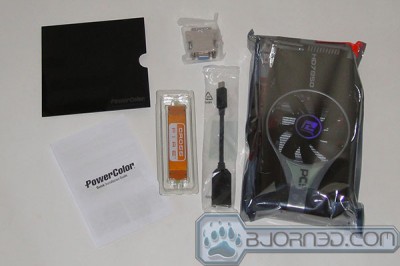 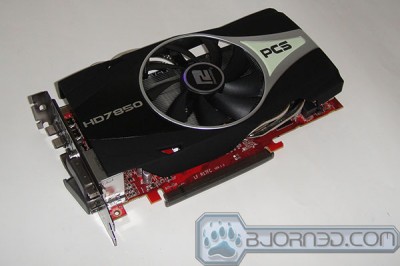 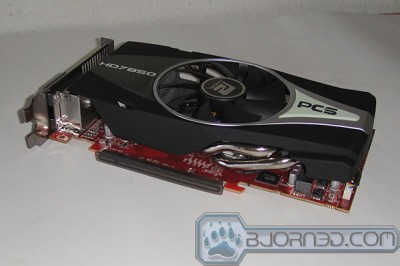 The PCS cooler that PowerColor puts on the HD 7850 features a single 92mm fan placed above the GPU core. Underneath the fan is a large heatsink with two pieces of S shaped heatpipe extending out of the heatsink. The two curved heatpipes direct the heat away from the heatsink from the GPU to the cooling fins. One minor issue we found with the SS shape heatpipe design is the slight protrusion above the top of the card. The tallest portion of the heatpipe extends about 0.7 inches above the card that potentially can have some issue with cases that feature a side panel fan. Other than that, the cooler looks great and the large 92mm fan should be able to keep the card running cool while keeping the noise-level down.

At 230mm x 117mm x 38mm, the PowerColor HD 7850 PCS+ is actually slightly longer and taller than the reference HD 7850 but it is still shorter than an ATX motherboard. If you plan to use it in an mini-ITX case, then you definitely want to check the length and height of the card as it is about 1.5 inches longer than the mini-ITX motherboard. 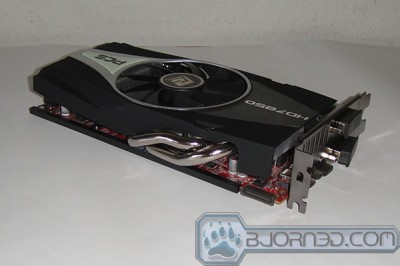 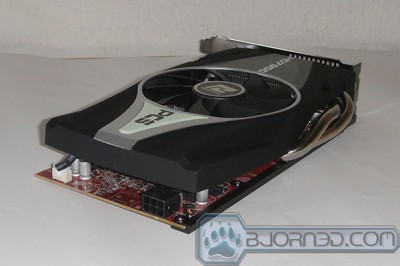 A single 6-pic PCIE power connector located on the front edge of the board to supply additional power since the HD 7850 has a maximum TDP of 150W, the 75W coming off the PCIE slot is not sufficient to keep it running. 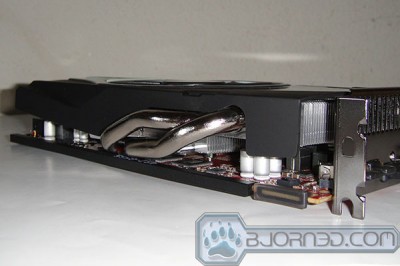 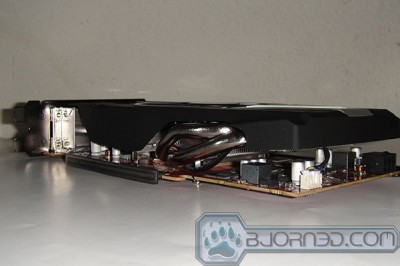 The plastic shrouds that PowerColor uses on the card is not the cheap plastic that sometimes comes with video cards that can easily break off. It feels durable enough and has a rubbery feel. If we look the card from the above, we can see the a race car design that is rather common for a lot of gamer cards. We do like that PowerColor reinforce the PCB of the card with a stripe of metal on the top. This prevents the card from flexing and less prone to damages. 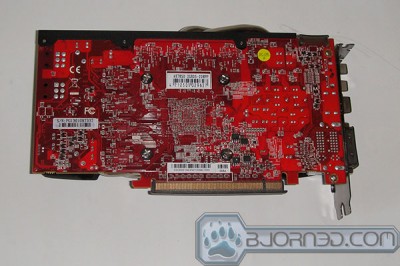 Not much to see on the rear of the card but we can see the red PCB board is being used here. 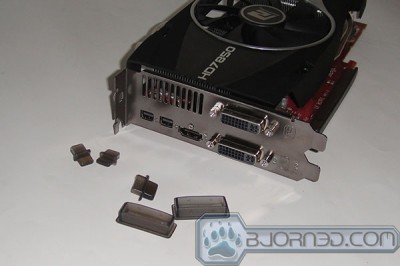 On the rear, we got two dual-link DVI-I connectors, an HDMI connector, and two DisplayPort connectors. The inclusion of the second DVI port makes the OowerColor HD 7850 PCS+ stands out among other HD 7850. As far as we know, other HD 7850 cards only come with one DVI port. We actually appreciate what PowerColor has done here. Since the HD 7850 is targeted toward mainstream market, it is more likely that buyers would already have monitors with DVI port instead of a DisplayPort. Thus, if you already have multiple monitors setup with your existing card via DVI, you would not need to seek for an adapter or buying a new monitor. Obviously, since the card supports AMD’s Eyefinity technology, you can possibly hook up to six monitors.

Every single ports and the PCI Express and the CrossFire connector are all covered with a plastic tab. While this may not necessary, we do like having them as they prevents dusts and any potential damages.

Not only that we got a different cooler than the reference design, the PowerColor HD 7850 PCS+ is also factory overclocked to 1000 MHz core and 1225 MHz memory, which is up from 860 MHz and 1200 MHz from the reference card. In fact, this is one of the fastest factory overclocked HD 7850 on the market. The card also comes with 2GB of GDDR5, which should definitely come in handy not only in games but also in multi-monitor setup.

All these goodies comes at a $219.99 retail price, which is s  $35 than the cheapest HD 7850 2GB. Considering the fact is the fastest factory overclocked HD 7850, the custom cooler, and the included mix of ports and the mini DisplayPort adapter, it is actually quite a nice bundle. The only thing that maybe slightly against the card would be the two year warranty as some other manufacturers like XFX offers limited lifetime. Though, two year is still within many other manufacturers such as Sapphire and HIS so the PowerColor is at least keeping up with other manufacturers. 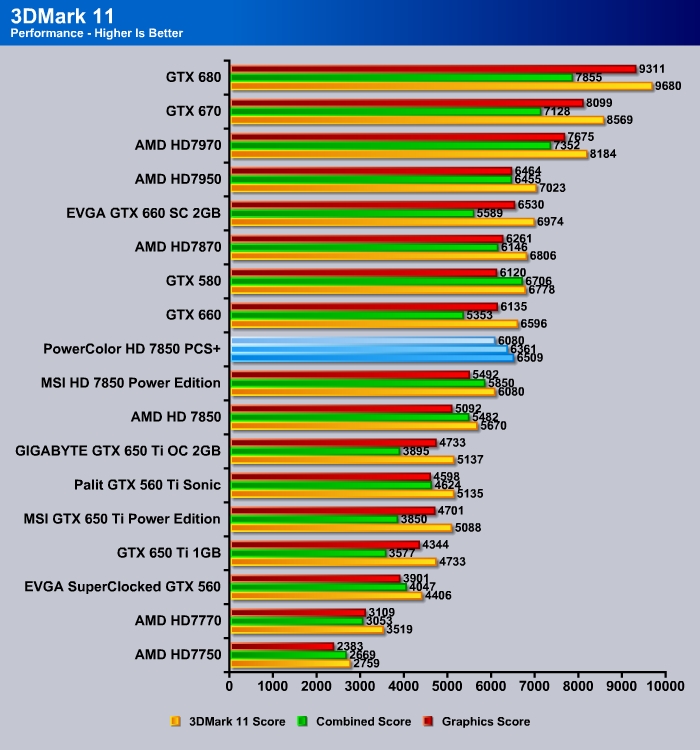 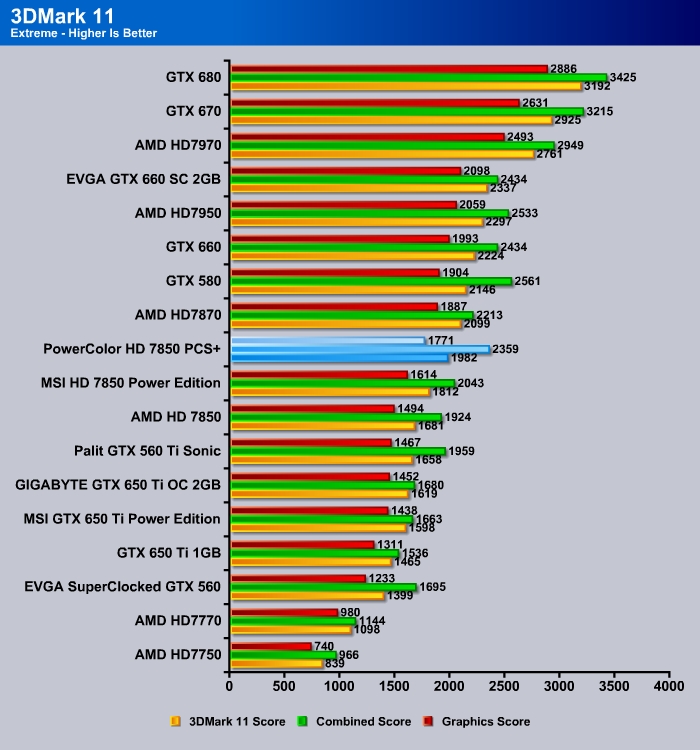 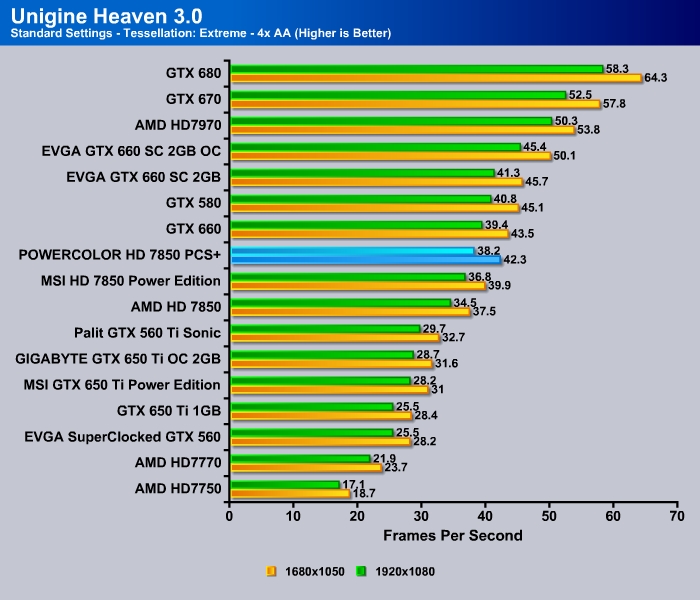 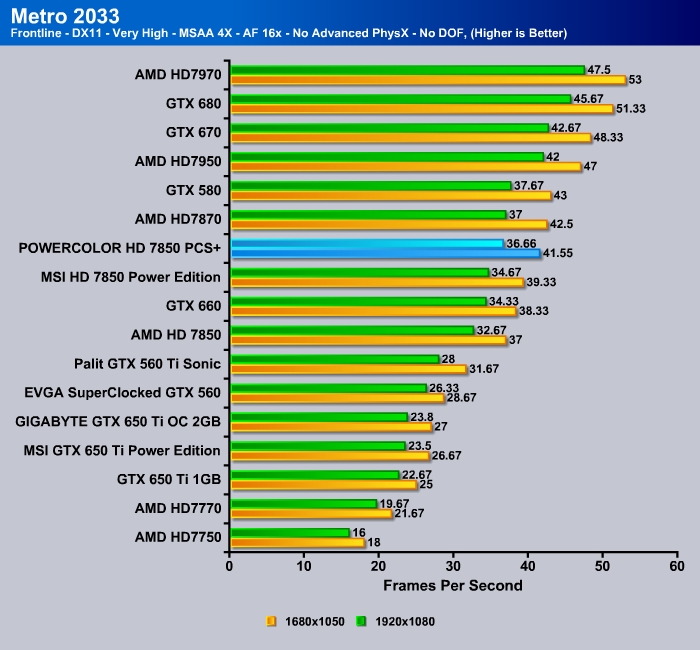 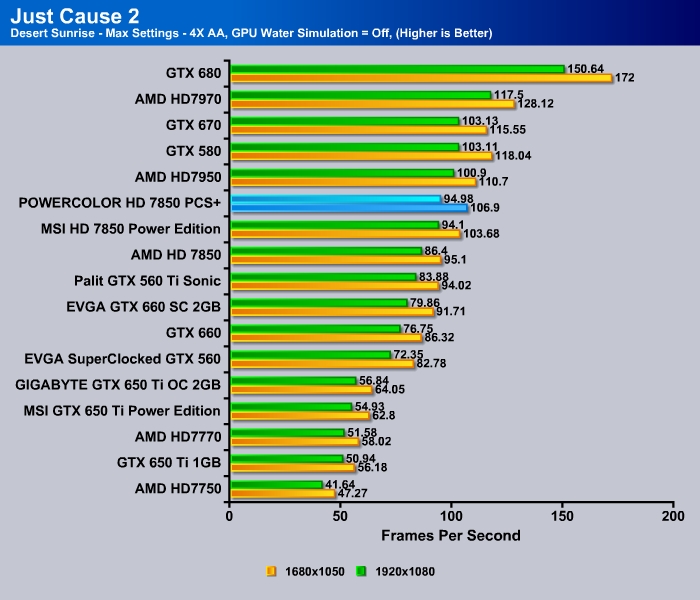 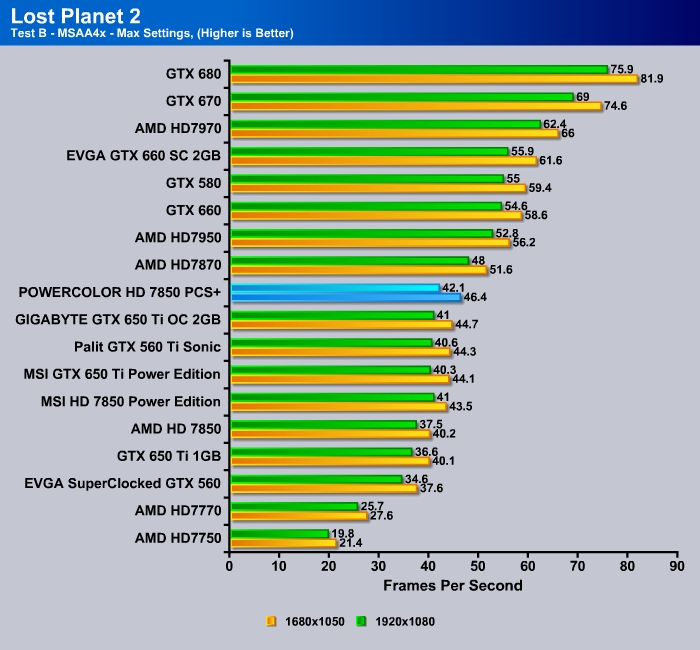 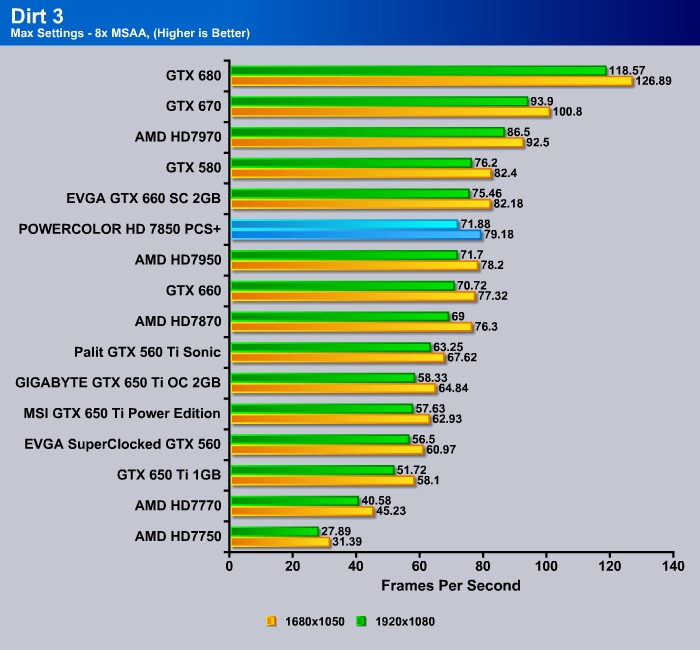 Currently, midrange graphic cards like the HD 7850 has plenty of power to run any games on the market at 1080p resolution with high setting. You really cannot go wrong with either NVIDIA or AMD if you are simply going to be running games with single display.

As expected, the PowerColor HD 7850 PCS+ offers on average about 10~15% faster than the reference HD 7850. When games are not shader bound, the card can even performs just like HD 7870 due to its overclocking speed. The extra overclocking also helped the card to perform much closer to the similarly priced GeForce 660.

PowerColor advertises the card to run about 15% cooler and the result we have seen certainly is not disappointing. Idle, the card runs at 31ºC and under load, it reaches to just 65ºC. Equally impressive is the noise-level of the card. Idle the card runs whispering quiet and even under load, it is just barely audible in our open air test bench. The use of open-air cooler as oppose to the blower certainly helped out with the noise reduction along with the SS-shaped heatpipe.

Unfortunately, the additional performance does cost a little bit of extra power consumption. Under load, the card consumes about 20 more watts than the stock HD 7850. We think the trade-off is worth it since you get about 10% additional performance out of the box and the fact that it runs cooler and quieter than the reference card. 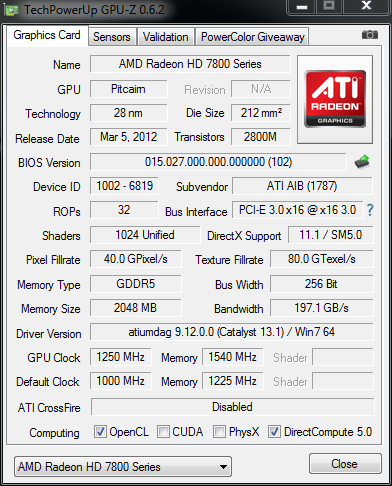 Overclocking AMD GPUs can be achieved with AMD’s own Catalyst Control Center (CCC) though its option is often limited where it does not voltage control and have limited range. With the CCC, we were able to overclock the card to 1050 MHz core and 1450 MHz memory. Pretty decent result but it is obviously that the card has more potential. PowerColor did not include any overclocking utilities with the HD 7850 PCS+ so we have to use other manufacturers tools. We tested with MSI’s Afterburner but could not get anything higher than what AMD’s own tool offers. Luckily Sapphire’s TriXX allows us to push the card even further and even offers the ability to adjust the voltage.

We did not touch the voltage setting with our overclocking but even at the default voltage, we were able to push the ard to 1250 MHz core and 1540 MHz memory, which is 25% higher than the already overclocked card. Not bad at all. There is definitely more headroom available since even at this speed, the card still runs cool with Furmark and we have yet to up the voltage.

For $200, the PowerColor HD 7850 PCS+ has a lot to offer. Being the fastest factory overclocked card, it is able to yield about a 10% improvement over the reference HD 7850. Many people simply want a video card that works and play well in games. The fact that the HD 7850 PCS+ is already overclocked means that buyers can just toss it into the rig and start to enjoy the extra performance. As always, overclocking permits some amount risk so buying a card that is factory overclocked with full full manufacturer warranty always puts an ease of mind for those who do not like the hassle of tinkering with a $200 piece of hardware that potentially can ended up in a dumpster.

The custom cooler with its SS-shaped design does its job really well at keeping the noise-level to bare minimum at idle and low under load. It also helped to leave plenty of overclocking potential for those who are inclined to push it even further. In our limited time of testing, we could easily push the clockspeed to 25% from the already overclocked setting, which is pretty impressive.

Despite the fact that the PowerColor HD 7850+ is slightly more expensive, we think it is one of the best HD 7850 on the market. We like the display ports mix on the card and the included mini DisplayPort adapter is handy to have for those who are seeking to run multiple monitors. The added value bundle along with the factory overclocking is well-worth the extra $35. The card is not perfect as the protrusion on the top of the card may presents problem for small form factor PC but we do not think it will affect most people. The lack of  overclocking tool and two year warranty is also minor complain. However, all in all, the PowerColor HD 7850 PCS+ certainly worth your consideration if you are on the market for a midrange graphic card.

Offers about 10% additional performance than the reference card

Summary: All in all, the PowerColor HD 7850 PCS+ is one of the best HD 7850 on the market considering its mix of ports, the bundle, and the fact it is one of the fastest factory overclocked card for the HD 7850. We award the card with the coveted Bjorn3D Golden Bear Award.
Share