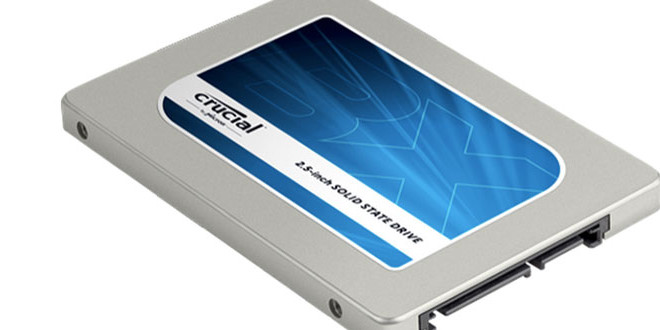 Crucial MX100 was one of the best affordable SSDs on the market last year. This year, Crucial updated the line-up with not one but two drives: the BX100 and the MX200. While the MX200 is the successor to the MX100 and aimed for mainstream market, the BX100 is designed for budget market. The two drives shared the same 16nm NAND but with different controller. Besides the controller difference, the budget drive lacks the hardware-accelerated encryption and the SLC caching that is found on its bigger brother. The SLC caching has its benefit enhancing a drive’s write performance but the hardware encryption maybe something that budget users may not care much. 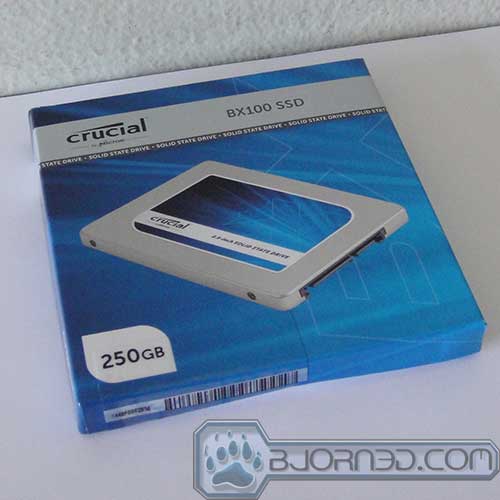 The controller that is inside the BX100 is the Silicon Motion’s 2246EN. This is departure for Crucial as it often uses Marvell based controller over the last few years. So this is the first time that the company uses non-Marvell controller for its SSD. The Silicon Motion 2246 is a four-channel controller which is a bit less than typical 8 or 10 that we found on the higher performance SATA drive. Thus, its parallel performance would be lower than other drives though the transfer rates per channel is pretty fast at 400MB/s.

The BX100 is available in storage capacity of 120GB, 250Gb, 500GB, and 1TB. The two lower capacity drives have a lower sequential write than the two larger capacity drives. The random write for the 120GB is also a bit lower at  43K IOPS as oppose to the 70K that is found on the 250GB or higher drives.  If you are looking for the best BX100 drive in terms of the performance, the 500GB or 1TB drive would be the drive you want to pick. 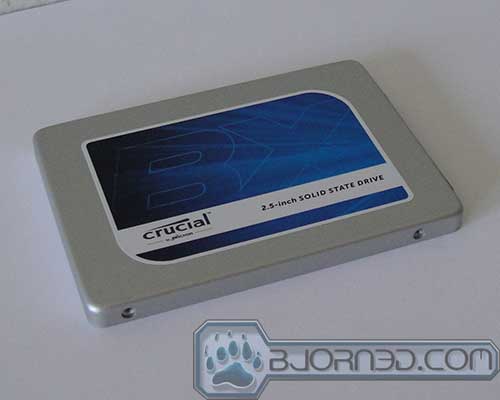 Crucial backed the BX100 with three year warranty. The drive has a rated endurance of 72TB of writes, pretty standard among the consumer SSDs though this is not as long as the five year that Samsung has offered with their 850 EVO drives. Though, the longer warranty length does cost a little more than what the BX100’s retail price. 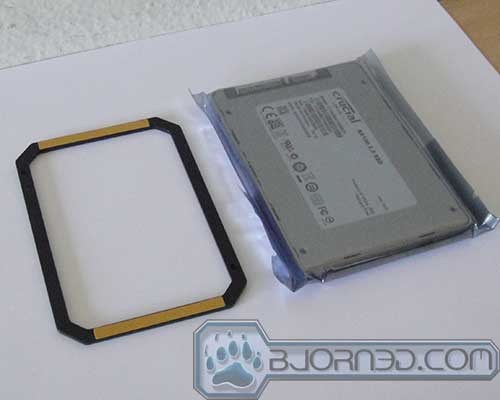 The BX100 is shipped with the a plastic spacer to extend the thickness of the drive from 7mm to 9.5mm. A lot of current generation notebooks will support 7mm SSDs but if you have one of the older system that takes 9.5mm, the space would allows you to use the drive without any issue.

The drive comes with Crucial’s own Storage Executive software. The software is a bit hard to find on Crucial’s site. For your convnience we included the link here for you. The 148MB software utility is a handy tool for the SSD. It supports Windows 7 or higher (sorry MAC users) and supports Crucial M500, M550, MX100, MX200, and BX100 SSDs. The software runs off the web-browser and has a very clean UI that is easy to navigate. 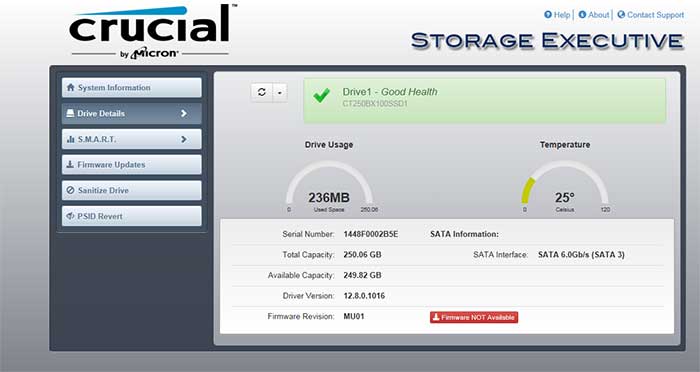 The Storage Executive tool provides the ability to:

We like the fact that it lets you update the firmware. The process is very simple where you just open the app and let it check online for newer firmware. Once it has found a newer firmware, it automatically download the firmware and quick reboot will update the drive to the newer version. In addition, the Storage Executive also has a PSID Revert feature that returns the drive to its factory default state in the event a password-protected TCG-enabled drive’s password is lost. Our drive does not support this feature though. 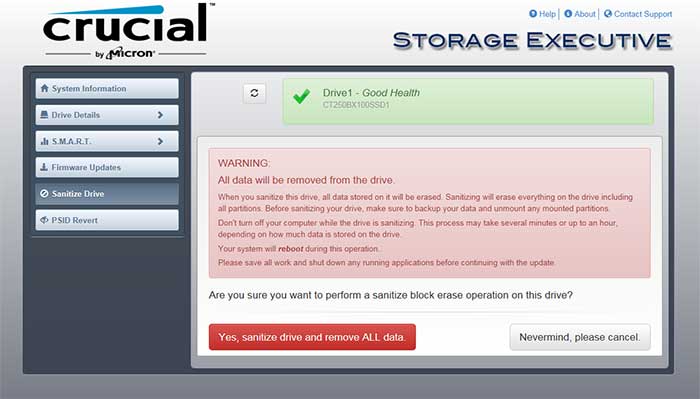 The Sanitize Drive will secure erase the drive to restore it to the peak performance.

Inside the Crucial BX100 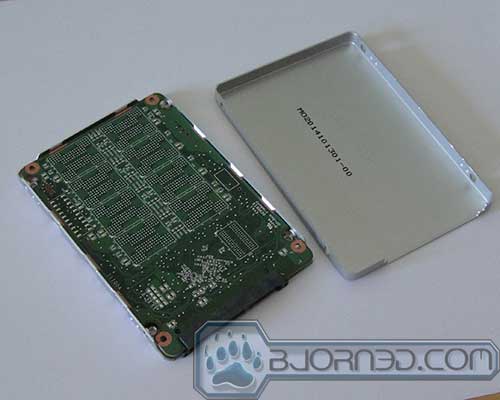 Crucial has moved to use screwless design for the BX100. The two pieces of metal casing are clipped onto each other without any screws securing them together. The two metal pieces are very tight locked and requires a bit of work to get it open. 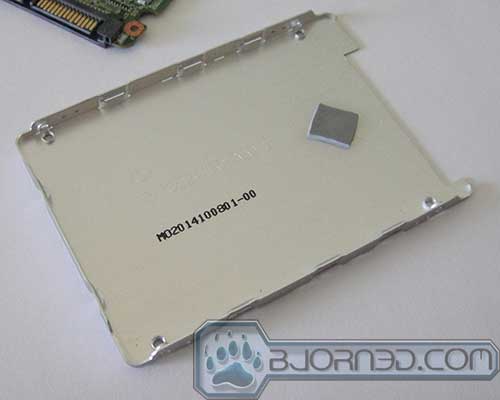 Once the drive is opened, we can see that Crucial places a thermal pad over the controller and uses the case as a heat sink. 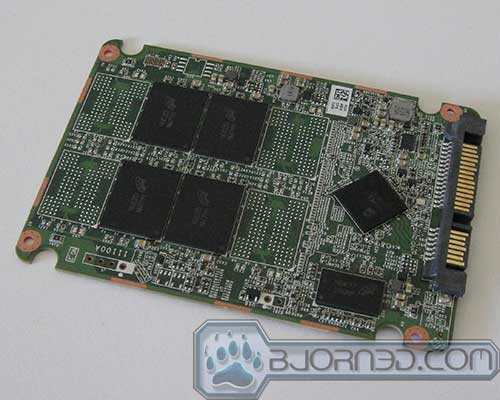 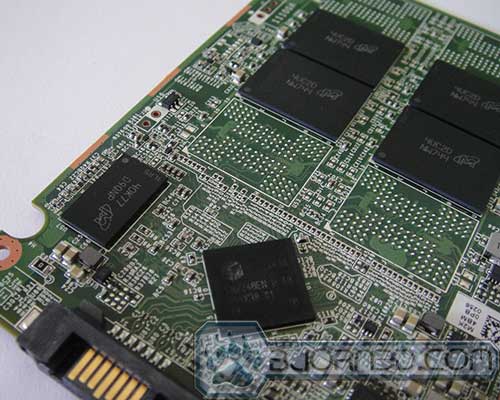 The PCB that is used is pretty standard in size for a 2.5” drive. This is a contract from Samsung that moved to use reduced PCB for their latest 850 EVO. Here we can see the Silicon Motion’s 2246EN controller the drive uses.  A single 256MB of DDR3 running at 1600MHz is used for cache. Four NAND devices are located on the same side as the controller with Crucial own part number 4UC2D NW744. The NAND is Micron’s 16 nm 128 Gb MLC NAND, so there is four die per each NAND device.