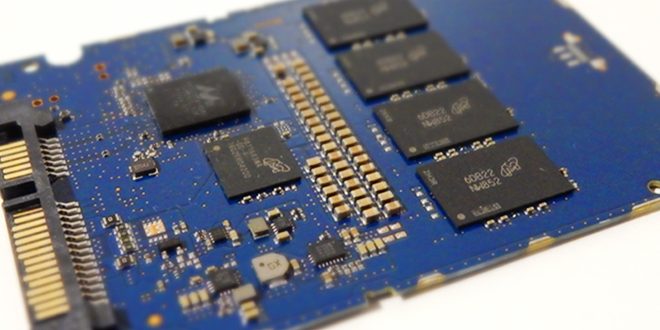 Crucial is back with a new revision of their MX series of SSDs, and this time around the MX300 750GB features Micron’s latest 3D NAND, promising improved performance and greater endurance. While the 750GB model of the MX300 line is touted as being “Limited Edition”, this was just for a preliminary period, as Crucial has fleshed out their product line with other various sizes from 275GB to 2TB. As SSDs become more commonplace as primary drives in gaming and enthusiast builds, it is important to not only ensure great performance, but performance that lasts. Lets take a good look at the Crucial MX300 750GB SSD. 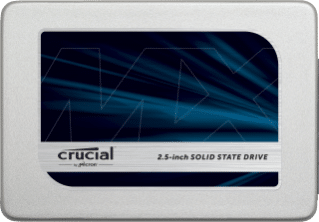 All but the 275GB model of the MX300 feature the same performance specifications. Sequential reads of up to 530 MB/s, and Sequential writes up to 510 MB/s (500MB/s for the 275GB model) place this drive firmly within the mid-range sector. Random reads and writes bring the IOPS up to 92k (55k for the 275GB model) and 83k, respectively. In addition to the performance specifications, most users looking into the MX300 series will be happy to find a 220TB TBW endurance rating, which equals out to around 120GB per day for 5 years. Backing all of this up is a 3-year limited warranty, making the MX300 series a valiant competitor in the mid-range SSD sector.

The MX300 comes packaged in Crucial’s standard SSD packaging case. The small cardboard box features a quick look at the enclosed SSD, and denotes the size of the drive inside. The back of the box gives details regarding the contents of the box itself, and also lists support information for users requiring assistance or help. Inside the packaging we find the SSD itself, safely sealed in an anti-static bag. Also inside the box are the 2.5mm spacing adapter for when the drive is used in a 9.5mm setting. The final piece inside the box is an information card and activation key for a free copy of Acronis True Image HD software. We love seeing migration software included with new drives, as it makes migrations so much easier. 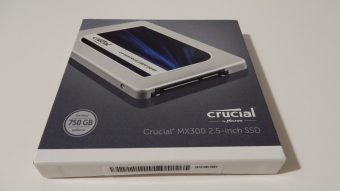 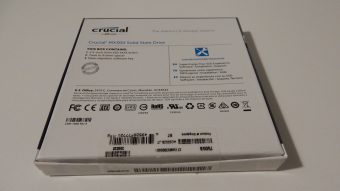 The MX300 is a pretty basic looking SSD. A large, mostly blue, sticker adorns the top of the drive, and denotes the MX series. Crucial has visually differentiated their MX and BX series labels not only by the series naming scheme, but by different shades of blue. The MX series is a darker blue, whereas the BX series is a brighter blue. No mention of the storage size is found on the top. The casing of the drive is your standard metal fare, and snaps together using a few clips along the perimeter of the drive. 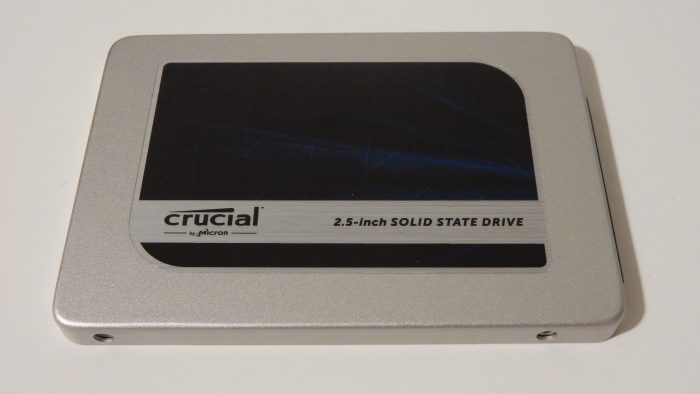 The bottom of the MX300 sports a sticker as well, but this time there is some relevant information. A model number, part number and serial number, along with capacity and interface specifications can all be found on the back side of the drive. Four standard mounting holes are available for installation. 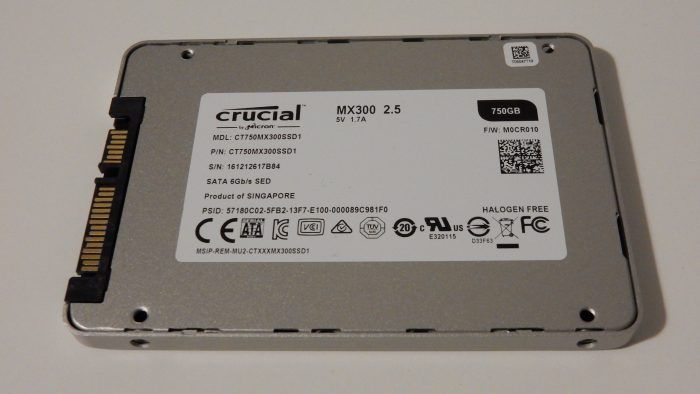 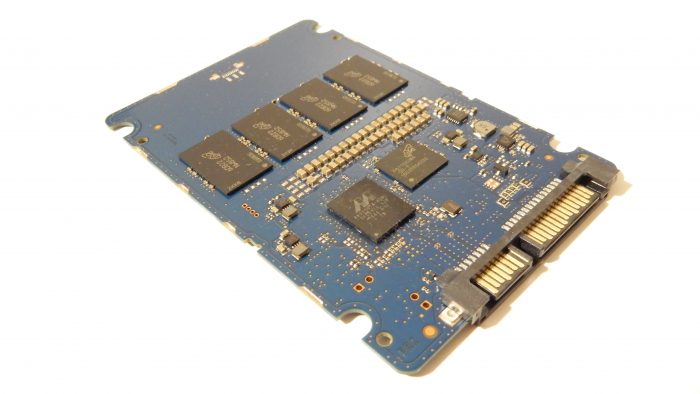 Once the outer layers of the MX300 have been removed, we are treated with a full-sized 2.5″ PCB. Four Micron TLC NAND packages are attached to the top side of the PCB, along with the Marvell 88SS1074 controller and a single 512 DRAM chip. The Marvell 88SS1074 offers an SLC cache known as Dynamic Write Accelleration to improve write performance, as well as Crucial’s Data Defense solution for protecting files from corruption.

The remaining four packages are present on the bottom of the PCB, rounding out the rest of the storage. 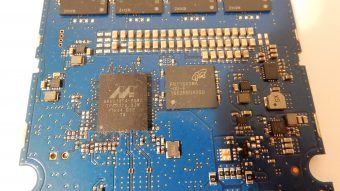 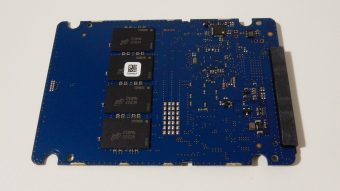 As with most modern storage devices, the installation of the Crucial MX300 was a breeze. After physically installing the drive in our case, we simply powered-up, formatted the drive with Windows’ Disk Management tools, and we were off to the races. 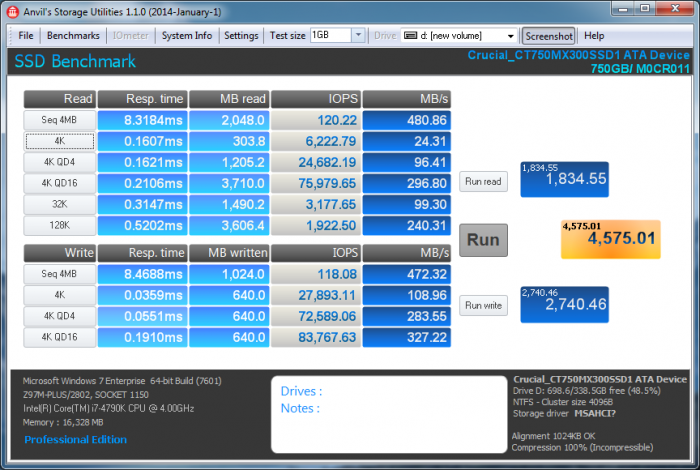 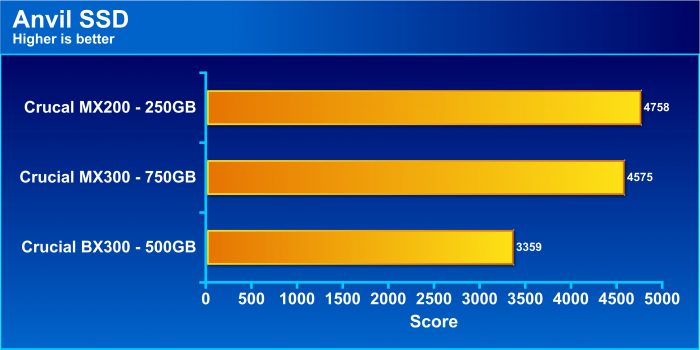 We really like Anvil’s SSD benchmark, as it gives us not only a final score for a drive, but also breaks that score down into various sub-scores. Overall, both MX-series drives performed very close to one another, and they handily passed the BX200 in terms of performance. And while the MX300 didn’t quite live up to the exact claimed transfer speeds and IOPS in Anvil SSD, it was not so far off to warrant any concerns just yet. 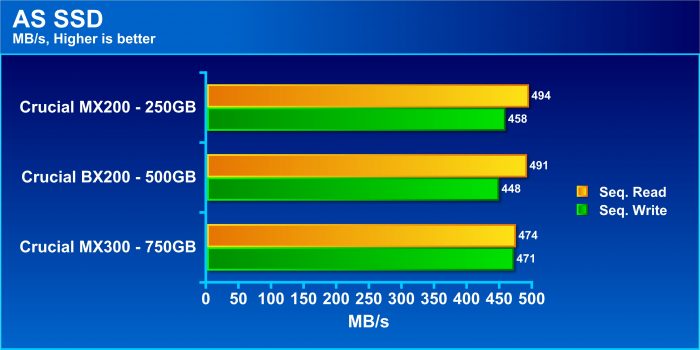 During Sequential testing with AS SSD, the Read performance of the MX300 was ever so slightly less than that of the 200-series drives. However, when moving over to Sequential Writes, the MX300 came out ahead of the pack, but again, not by much of a margin. 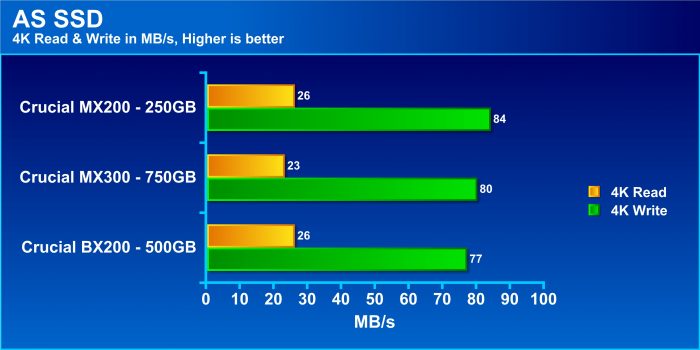 Moving on to the 4K Reads places the MX300 at the back of the pack by a small margin. Swapping over to 4K Writes, the MX300 settles into the center, buy only by a few MB/s in either direction. 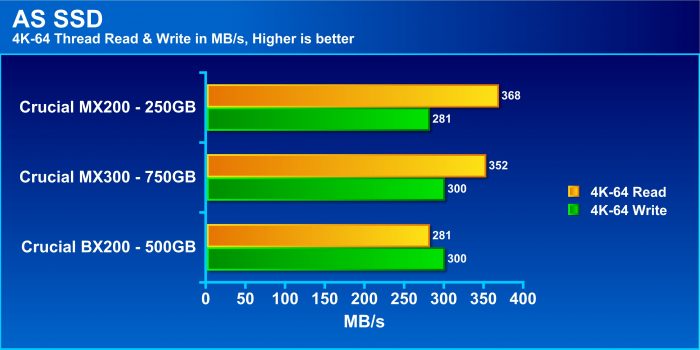 Again, the MX300 is planted right in the middle of the pack of Crucial SSDs. 4K 64-Thread Reads by both the MX200 and MX300 outperformed their BX-series relative by the largest margin we have seen yet. Writes brings things back to a more even field, with the MX300 tying the BX200’s performance, and just edging past the MX200.

An all-time favorite, and often-used benchmark, Crystal Disk Mark gives us a quick and easy view of just how the drives being tested perform. 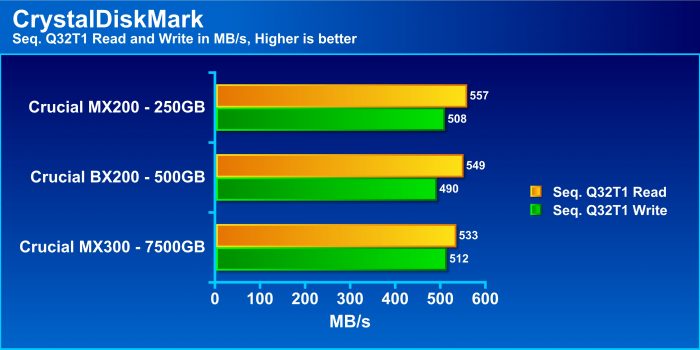 As we have seen in previous tests, the differences between our three drives have been quite small. Here in CrystalDiskMark, with Sequential Q32T1 Reads, the MX300 is slightly slower, but the Write performance brings it to the front of the pack by a small margin. 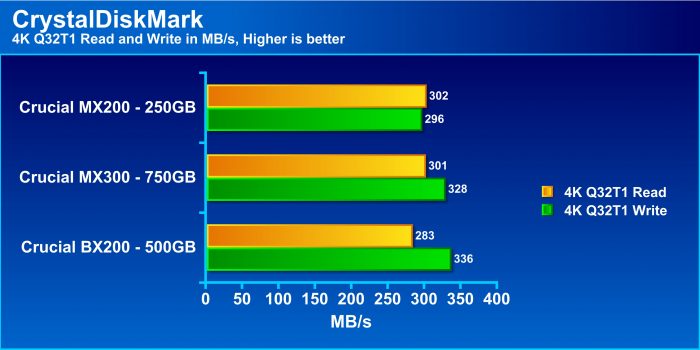 Bumping up to 4K, Q32T1 Read and Writes, the MX300 is again towards the center of our test group.With little difference between the drives being compared, we can be quite confident in the reliable and expected performance from these drives. 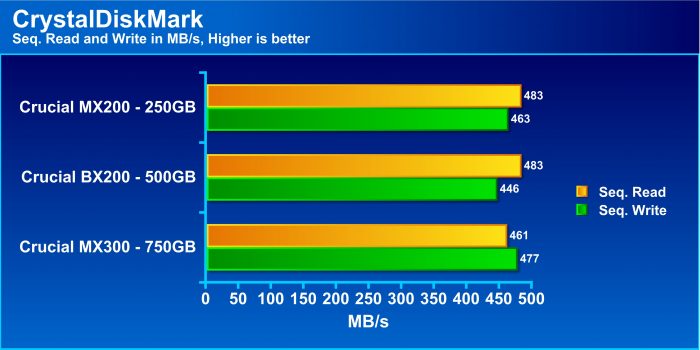 Straight Sequential Reads and Writes paints the same picture; three drives all performing at nearly the same level across the board. While the MX300 trails a bit in Read performance, it makes that back up in Writes.

4K Read and Write performance really drops off, as expected, in our CrystalDiskMark testing. Only a slight margin separates our drives, but the MX300 is on the low end of the spectrum.

Again, we show nearly identical results across the board from our lineup of Crucial SSDs. The only real outlier is the Storage 2.0 bandwidth result of the BX200, which is more than 50 MB/s slower than the MX300’s speed of 242.90 MB/s.

Our time with the Crucial MX300 has been what we would consider “tame”. While that may lead you to believe that we weren’t impressed by the MX300, you would be wrong. The performance across the board has lived up to our expectations when we consider Crucial’s target market for this drive. We were not expecting to blow other drives out of the water, and we didn’t see that happen. We also didn’t have any glaring issues with the drive, leading to an overall normal benchmarking process in the lab. And you know what? Sometimes some normalcy is a good thing. No fretting of the quirks of a new tech breakthrough that is still in its infancy. Micron’s 3D NAND has settled into place, and allows the Crucial MX300 to produce good numbers for a non-enthusiast-level drive.

Using the MX300 as a primary OS drive supplementing, or even as a secondary drive used for storage is going to improve performance immensely when compared to a standard hard drive. If you think about what normal, every-day use of a computer looks like for users that don’t fit the enthusiast demographic, the performance to be had when moving from a legacy drive to an SSD will be mind-blowing. The fact that Crucial also includes a complimentary license for Acronis True Image HD, shows that they are trying to make this jump in technologies easy for those looking to make the move. Add in a 3-year warranty and a 220TB TWB endurance rating, and you have a drive that will be sure to be a good fit as either a primary OS drive, or a fast storage drive for all of your games and multimedia. Bundling this group of performance and features is what leads us to award the Crucial MX300 750GB SSD the Bjorn3D Seal of Approval.

Micron's 3D NAND has settled into place, and allows the Crucial MX300 to produce good numbers for a non-enthusiast-level drive.