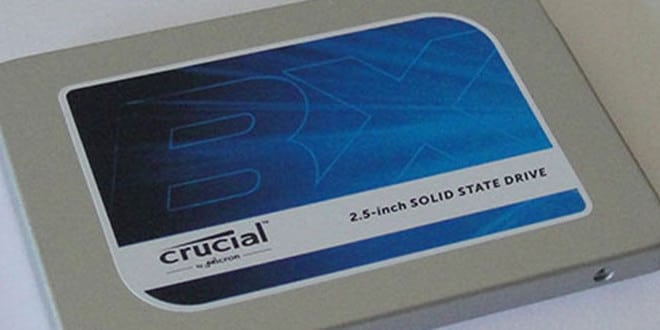 It should not come as a surprise that all of the SSDs launched this year uses 3D NAND or TLC as oppose to MLC. The move to the 3D NAND and TLC NAND allows the manufacturers to reduce cost but at the same time increase the storage capacity of the SSDs. This translates to lower price and even better gigabyte per dollar ratio that really gives you no reason for not upgrade to an SSD. 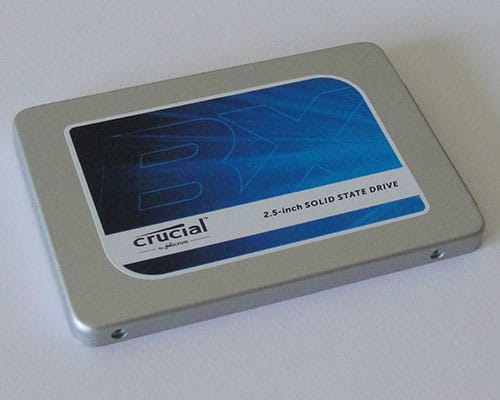 The Crucial BX200 is the first drive from the company that features TLC NAND. It is the successor to the popular mainstream/budget SSD, the BX100. While the BX100 paired Micron MLC with the Silicon Motion SM2246 controller, the BX200 gets an upgrade to the newer Silicon Motion SM 2256 controller and Micron’s own 128Gb 16nm TLC NAND. The transition to the TLC means that there are 50% more pages on the NAND flash than the MLC so that manufacturers can pack even more data onto the same die space. As a result, the highest capacity drive for the BX200 is 960GB. Of course having more bits packed so tightly does come with a few costs. TLC drives need a finer voltage control over the how the data is programmed, more complicated error correction mechanism to ensure data reliability, and higher power consumption.

For the BX200, Crucial turns to the newer Silicon Motion  controller to help to maintain the necessary data correction. Compare to the SM2246, the newer controller is still a SATA 6Gb/s controller with 4 channel flash I/F and 8 CE per channel support. It continues to support AES-128 and AES-256, and TCG and Opal. However, one feature that is added to the new controller is the configurable LDPC ECC which is more advanced ECC correction than the BCH error correction that is deemed essential for retaining data reliability of the TLC drives.

The BX200 is still a 2.5” drive that is 7mm thick like its predecessor. It comes in the same housing as the BX100 with metallic body that acts as heatsink. Crucial bundles the BX200 with the Acronis TrueImage HD software to help with data migration. In addition, the drive also comes with a spacer extend the thickness to 9.5mm for older laptops that uses 9.5mm thickness drive.

In terms of the performance, the new BX200 gets a slight boost in the sequential read and write and the random write. Though the random read has suffered quite significantly which would have impact how users perceive on the system’s responsiveness since it affect the app loading speed. The drive has a rated maximum sequential read of 540 MB/s, sequential write of 490 MB/s, random read of 66K IPS, and random write of 78K IOPS.

The BX200 also improved on the idle power consumption. While the average active power still rated at 150mW and the active max is upped slightly  to 4200 mW. The idle power has been reduced to 65 mW, or 43% lower than the BX100. The deep sleep also gets a 30% reduction to 10 mW. It is still not as efficient as Crucial’s MX200’s 2 mW, which uses Marvell controller so the difference in the power consumption most likely due to the controller. Still, it’s good to see lower idle consumption as it would help with the battery life on the mobile devices. 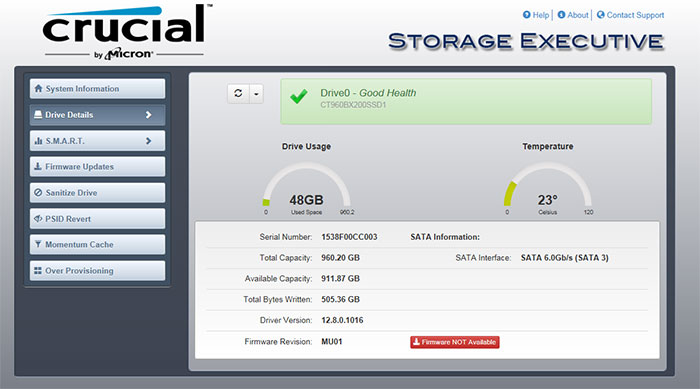 The drive comes with the Crucial Storage Executive software utility that can be downloaded from Crucial’s website. The Storage Executive (v3.24) lets users get information about their drive such as firmware version and SMART. Additionally, it will also able to check and update the firmware on the drive. It also lets you monitor the drive’s operating temperature and heath, and reset the encryption password, as well as secure erase the drive.

A feature that is included with the software is the Momentum Cache where it helps to increase the drive’s burst performance. This feature works by caching the input and outputs (I/O) write data to the system memory first before they are commuted to the NAND. Data transfer to the RAM is much faster than to the SSD so by temporarily store data to the RAM will improve on the write performance. When the feature is enabled, one quarter of the system RAM (up to 4GB) would be reserved for caching data. The amount of cache is dynamic so that when the system starts to utilize more memory, the software will relinquishes the reserved cache to the system. The Momentum Cache will maintain at least 1GB of idle memory for the system and during intensive the system memory usage, the cache would be reduced to 256MB. And if the system demands even more memory, the caching will temporarily halt so that the system can utilize all of the memory. The cache will resume until at least 1.4GB of the memory is free. This is a nice feature that not only helps with the write performance but also could help lower the write amplification. However, this feature would be more beneficial for laptops since desktop system could run into potential data loss when the system suddenly loose power. RAM does not retain data during power loss, so any data that is not committed to the SSD would get lost in the event of a power loss.

The BX200 is a decent choice for desktop users who are looking to upgrade their mechanical drives as it offers good price per gigabyte ratio. Unfortunately, its performance is just not as competitive against others that are priced similar on the market.