The Asus X99 Deluxe is a popular choice among 2011v3 users, it falls between top end enthusiast boards and budget boards leaning toward top end more than budget. The board itself is a dark brown color with white accents and quite striking to the eye.  Heatsinks and rear panel I/O are trimmed in white and the brown background of the board is sure to highlight your components well. Packed with features only Asus has the resources to field. Specifically their OC socket. The unique socket connects extra

The Asus X98 Deluxe is packed with Asus technology starting at the CPU socket with their patent pending 2011/2083 socket design, flip a switch and the board accesses extra pins on the Haswell E family of CPU;s and unlocks extra voltage settings in BIOS. While completely compatible with 2011v3 CPU’s the socket allows you to access the extra pins on the Haswell series enabling higher DDR4 memory frequencies, lower latencies and enhanced stability while overclocking, extending all the way to extreme overclocking conditions, such as Liquid Nitrogen (LN2).  While most of us won’t be dipping our toes in the LN2 pots you can bet the Asus X99 Deluxe produce an excellent Air or Water Cooled OC.

Asus’s 5 Way Optimization technology dynamically optimizes an X99-Deluxe-based PC with one click. First up is Turbo Processor Unit (TPU), which offers precise voltage control and advanced monitoring for both the CPU and the graphics card. Then there’s Energy Processing Unit (EPU) to deliver system-wide real-time power savings, controlled via a simple onboard switch or the easy-to-use AI Suite 3 utility. Part of the 4 Eay Optimization includes the Digi+ voltage-regulator module (VRM) to enhance performance, increase efficiency and ensure reliability.  Fan Xpert 3 for peerless customized fan control. Completing the 5-Way Optimization technology line-up is Turbo App, an intuitive tuning panel to tailor and boost all parts of the system for specific games or programs. 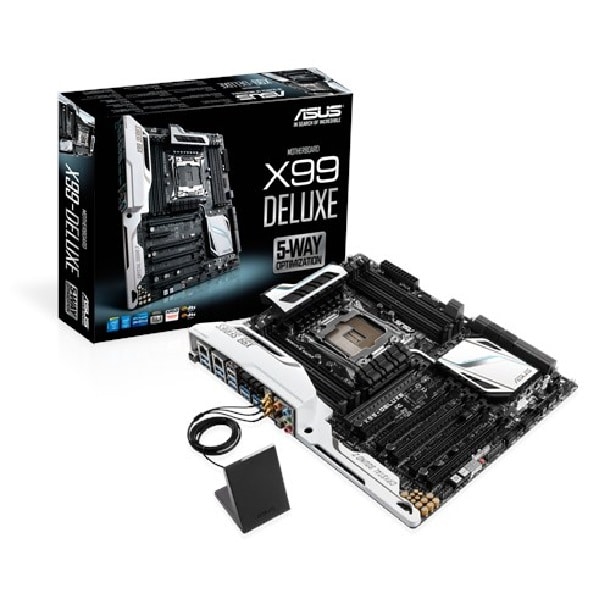 Right on the front of the Box you see mention of the 5 Way Optimization features and I hate spoilers as much as the next guy but 5 Way optimization works like a charm.  End users will benefit from  exclusive 5-Way Optimization technology to dynamically optimize an X99-Deluxe-based PC with one click. First up is Turbo Processor Unit (TPU), which offers precise voltage control and advanced monitoring for both the CPU and the graphics card. Then there’s Energy Processing Unit (EPU) to deliver system-wide real-time power savings, controlled via a simple onboard switch or the easy-to-use AI Suite 3 utility.

You may not be paying top dollar for the Asus X99 Deluxe but you don’t get shorted hardware or quality, the board is gear for hard-core overclocking and hard-core overclocking calls for quality. The bundled Hyper M.2 x4 expansion card gives users flexibility to equip their systems with up to two M.2 devices to enjoy transfer speeds of up to 32 Gbit/s. Hyper M.2 x4 supports M.2 devices from the smallest 30 mm (2230) to full-length 110 mm (221100) cards. The supplied ASUS Fan Extension Card provides flexible additional cooling in the shape of three 4-pin/3-pin fan headers. With a hardware-level PWM/DC mode, Fan Extension Card offers exceptional control and is ideal for water-cooled or extreme-airflow high-performance systems.

Now one of my pet peeves, onboard Wi-FI, every board out of the box should include Wi-FI. I don’t know anyone that wants to go but a $40 dollar Wi-FI USB stick after springing the money to build a 2011v3 system.  Well Asus has you covered in a big way! The Asus X00 Deluxe includes super-fast 802.11ac wireless connectivity on board. The three-transmit, three-receive (3×3) antenna configuration enables wireless speeds of up to 1,300 Mbit/s. (with supporting router)