Now days, CPU and chipset are coming from the same manufacturer, we often get a new chipset along with a CPU release. AMD has traditionally offered a much longer upgrade path with their motherboard where the boards often lasts two generations. The FM2 socket introduced with the Trinity is compatible with the Richland but sadly with Kaveri, you would need a new motherboard. Kaveri requires a new FM2+ socket where it has slightly different pin configuration with two additional pins. The FM2+ boards will actually be backward compatible with Richland/Trinity FM2 APUs as well as Kaveri but unfortunately the reverse is not true. If you have gotten a FM2+ board that is running an FM2 APU (Richland/Trinity), a BIOS update is all you need in order to use Kaveri.

The official supported chipset or Fusion-Controller Hub (FCH) for the Kaveri are A55, A78, and A88X. The A55 was the chipset that AMD has launched since the FM1 and was continued to the FM2 chipset and now AMD continues to use the same chipset for the FM2+ socket. The A78 FCH, from what we can tell, is the same as the A75 except that it gained FM2+ socket support. Finally, the A88X is a new chipset that is slightly upgrade from the A85 chipset where it now adds support for not just FM2+ socket but also the PCI Express 3.0. This marks the first chipset from AMD that supports PCI Express 3.0. It also supports CrossFire where you are able to split the 16 PCIE lanes into dual 8 lanes. Other than these, the chipset still has the same number of USB and SATA ports: 4 USB 3.0, 10 USB 2.0, and 8 SATA 6 Gbps ports. 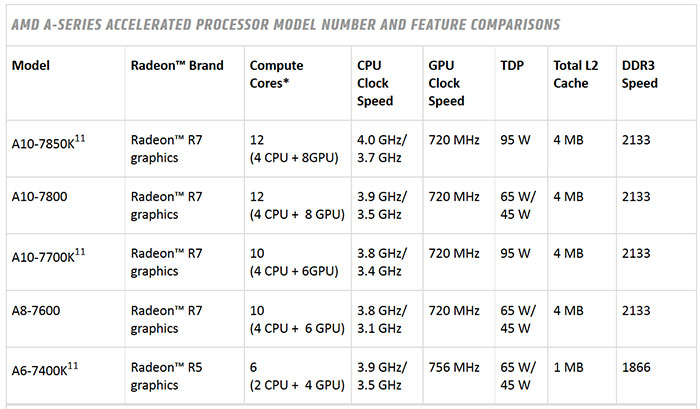 AMD since added a new A10-7800 that has the same number of cores as the A10-7850K but has a lowered clockspeed and lower TDP. In addition, the A6-7400K is also added where it has two CPU cores with four GPU cores. This particular model is different than others as it only comes with two CPU cores and 1MB L2 cache. It also supports DDR3-1866 as oppose to 2133MHz but has a slightly higher (36 MHz) GPU frequency than other APUs.