The Vishera CPU will still fit the AMD AM3+ socket motherboard with the same AMD 900 series chipsets that were launched last year. We are glad to see the same chipset and socket support. As you may recall there are some motherboards out like the ASUS Crosshair IV, that support Bulldozer but using an older chipset. AMD has informed us the Vishera will only be officially supported on the 900 series chipsets and it is up to the motherboard manufacturers to decide if their board will support Vishera. We highly suggest you contact your board vendor or check their website before putting the new CPU in the board. If you have a board that uses 900 Series chipset then you are probably fine, but for anything older, you would definitely want to check its compatibility.

As always, before installing a new CPU, we always suggest upgrading the BIOS first. With our ASUS Crosshair V Formula that uses the 990FX chipset, we had no issue getting the board to recognize and run the CPU even without updating to the latest BIOS. Still, it never hurts to check with the board vendor to see if your particular board needs the BIOS update before you install one of the new CPUs in the board. 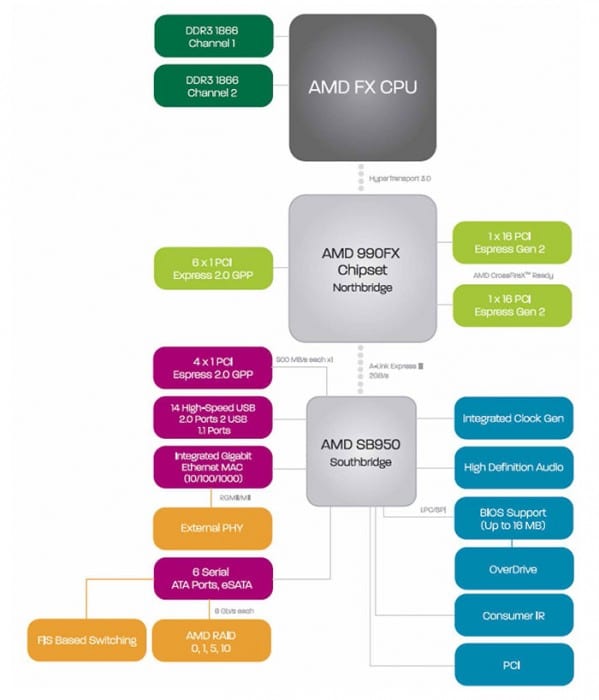 Three Northbridge chipsets to choose from are the 990FX, 990X, or 970. The Southbridge will be the same, SB950 in this case regardless of which Northbridge you choose. Note that none of the AMD CPU/APU support PCI Express 3.0 yet so we get up to 32 lanes of PCIE Express 2.0 on the 990FX that is capable of split into dual x16 or quad x8 configuration for CrossFire. The 990FX will also support SLI natively for NVIDIA graphic card. It will come with six SATA 6 Gbps capable of RAID 0, 1, 5, 10 and 12 USB 2.0. The USB 3.0, however, would require third party chip. 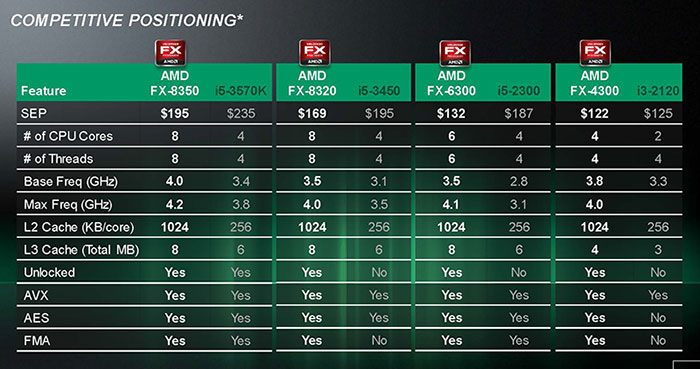 The picture above shows us how AMD prices these chips against Intel’s offering. The top of the line FX-8350 is positioned against the Core i5 3570K, fastest Ivy Bridge CPU without Hyperthreading support. While the FX-8320 is against the Core i5-3450 and the six-core variant FX-6300 is against the Core i5-2300. The only quad-core variant, FX-4300 is against the Core i3-2120. This model is a rather interesting since it is in direct competition also against AMD’s own A10-5800K. Choosing between these two chip is probably going to be depending on the platform and need. If you need more PCI Express lanes, then you would go with the FX-4300+990FX combinationbut if you want to use the integrated GPU or need native USB 3.0 and/or two additional SATA 6 Gbps ports, then you probably would want to choose the A10-5800K+A85X combination.