Once again, EVGA has graced us by sending the EVGA GeForce GTX 1070 FTW GAMING ACX 3.0. This time it’s the EVGA GeForce GTX 1070 FTW GAMING ACX 3.0 with it’s Pascal GPU. The Pascal GPU is NVIDIA’s most advanced GPU core ever produced and utilizes a 16nm FinFET process from the Taiwan Semiconductor Manufacturing Company. TMSC uses a third generation High-k/Metal Gate process, and a fifth generation transistor strain process with a 193nm lithography. As a result of the 16nm  process used in Pascal GPUs, you can achieve the same or greater GPU capabilities with less power. TSMC’s 16FF technology can provide up to 65% greater speeds at around 2 times the density or 70% less power usage than its 28HPM technology.

Now combine TSMC’s 16FF technology with NVIDIA’s Pascal GPU and let EVGA put their unique spin to it, and you have one heck of a mind-blowing EVGA GeForce GTX 1070 FTW GAMING ACX 3.0. The core clock runs at 1607MHz, with a 1797MHz boost clock, and is powered by two 8-pin connector. The card also features dual BIOS chips, 10 + 2 phase power and a 215 watt TDP. 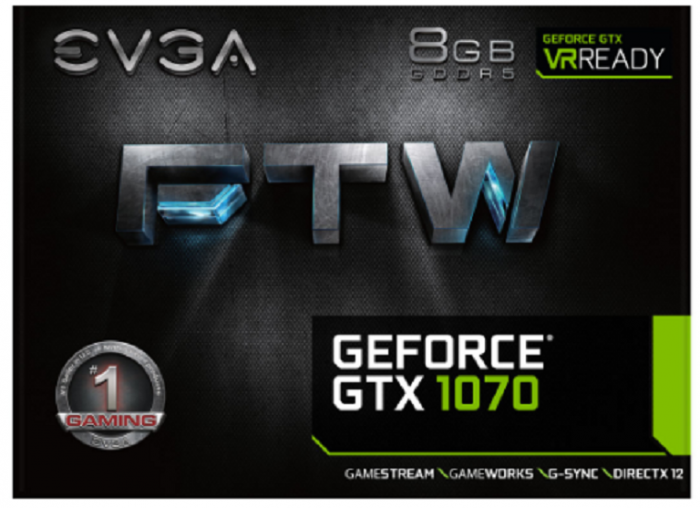 Now that’s not all the goodies packed into this son of a beast, that’s just the core specs and some details about the FinFET process. EVGA throws on more than double the phase power of a reference design which on most models is 4 + 1 phase power. We especially like the dual BIOS; no bricking on flash upgrades. Flash a BIOS and get a failure? Just switch to the backup BIOS and re-flash the bad BIOS and you’re running non-stop.

We’ll get into in-depth shortly, but you are going to love the RGB colors and the ACX 3.0 cooling. You’ll be hard pressed to find a GTX 1070 better equipped than the .