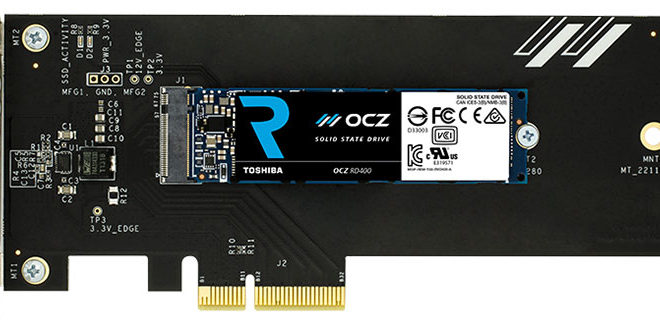 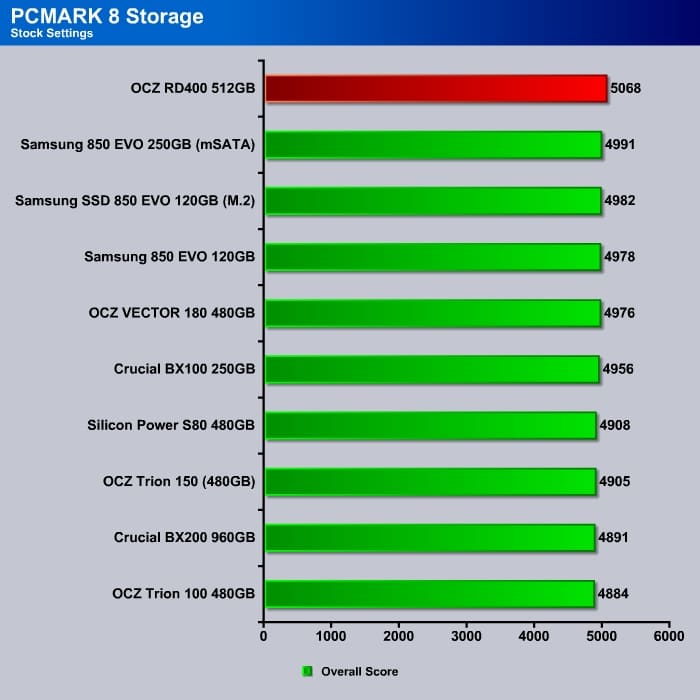 We turn to the PCMark 8 Storage benchmark to assess how a drive handles typical desktop tasks. The RD400 takes the top spot here with a score of 5068, edging out the Samsung 850 EVO. Compare this to the fastest OCZ SATA-based SSD, and we can see that it manages to score 92 points higher.

The OCZ RevoDrive has always been a drive that is aimed for enthusiasts who want the fastest storage option available. The RD400 continues such legacy. However, unlike the previous RevoDrives that had a few compromises, the RD400 is almost perfect in every aspect. The drive truly takes the advantage of the additional bandwidth offered and manages to deliver impressive performance. It excels at both sequential read and write. The random writes are also impressive, though its random reads are a bit lagging behind even a couple of the SATA drives, something that probably would be addressed in the future with a new controller and firmware.

All together, the RD400 has clearly cemented itself as a drive that is capable of competing against the big players like the Samsung 950 Pro and the Intel SSD 750. Clearly, the RD400 is not meant for average consumers but for the enthusiasts who absolutely demand the fastest hardware available. For them, the RD400 is definitely worth considering. Not only is it capable of delivering competitive performance, it is also priced very aggressively. In addition, the fact that it comes with 1TB as an option is something that only a few manufacturers are able to deliver.

If there is one thing that we can complain about the RD400, it would have to be its pricing. While the drive is competitive against other NVMe PCIE SSDs on the market such as the Samsung 950 Pro or the Intel SSD 750, it is still asking quite a lot more than SATA SSDs. Its performance boost over SATA drives certainly correlates to its premium price. There is no doubt that the RD400 serves up data faster than any SATA SSD can deliver, however, as we can see from the PCMark 8 Storage benchmark, the performance gains in the real-word client PC may be just a few percentage as opposed to double and triple like we have seen with IOMeter. Obviously for heavy IO environments that can take advantage of the additional bandwidth offered by the NVME M.2 PCIE drive, the boost in speed would be appreciated. However, for typical desktop systems, whether the small difference is something that is perceptible in day to day usage is pretty hard to say. For average consumers, the RD400 is probably out of grasp and they would probably be better off just buying the fastest SATA SSD with highest storage capacity. With that being said, there is no doubt in our minds that the RD400 is a great choice for anyone who is shopping for a PCIe-based storage device. The drive is also backed with a 5 year warranty, along with a time-saving Advanced Warranty Program.

We have to applaud Toshiba for delivering a solid client NVMe SSD to the market. The RD400 puts greater pressure not only on the drives currently available, but also on the drives coming to the market soon. We expect that other manufacturers will follow up with their own PCIe-based NVMe SSDs, and with increasing competition, the market will respond to drive the wider adaptation of the standard and lower price per gigabyte.