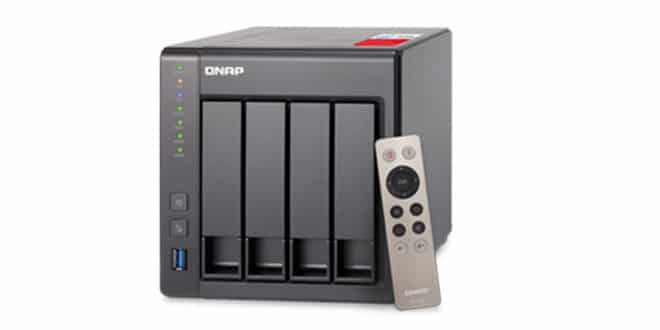 QNAP has been using the same user interface over the last few years on its NAS units. However, the UI has been revamped with the launch of the latest QTS version, 4.2. The new firmware feels much more modern with its flat icons and colorful interface. The the basic functionality and the navigation has not changed, where we still have the navigation with the menu option on the upper left corner and search on the upper right corner, so veteran users would feel right at home with the new UI. Despite this, the UI fits much better with other platforms such as mobile or desktop OS, and not only do we get a better looking UI, but the performance seems to have improved even with our older NAS system. It’s great to see QNAP bringing additional functionality and a beautiful interface to the NAS without sacrificing performance. 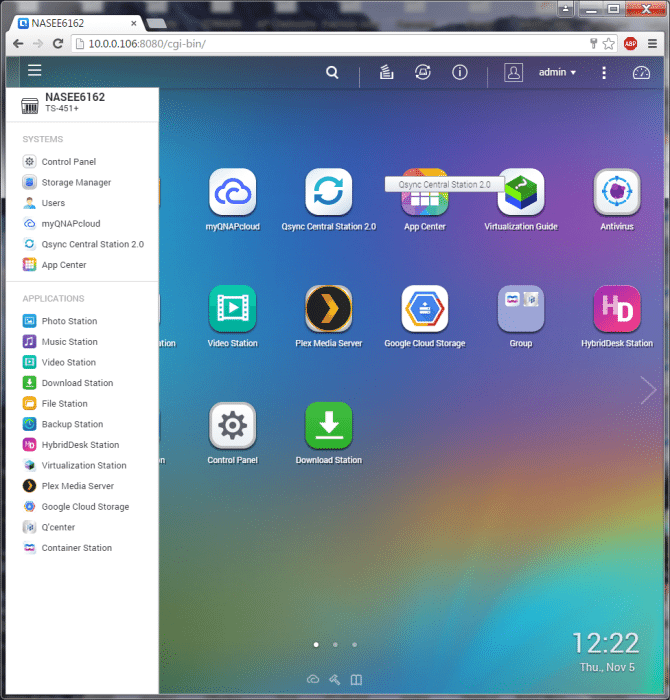 It is quite obvious that QNAP has a plan to turn the NAS into your secondary PC, as they are slowly adding many desktop functions to their NAS devices via QvPC and HD DeskStation. The 4.2 firmware brings greater multi-task features, and it is able to run multiple applications such as listening to the music via the Music Station while also editing documents with Note or browsing pictures with the Photo Station. Apps can be run in windowed mode or they can run on the background, and you can quickly switch between the applications by clicking on the tab located on the top of the screen. While it is nice to be able to play music on the NAS while working off the NAS, the UI lacks some sort of quick media control, so if you wish to skip songs, you would have to open the music station. Also, despite the fact that we can switch apps with the tab on the top, navigating multiple application is still not as easy as what you can get from any desktop, as you always have to click on the tab on the top of the screen to switch between the apps. There is also no quick way of placing apps side by side like the Windows Snap feature or one click to minimize all opened windows. In many senses, using the QTS feels a like Chrome OS or a web browser where you can have tabs opening or running in the background, but it does not offer you the true multi-tasking experience you would get from a fully fledged PC. Still, it is nice to be able to do some simple multitasking so that the NAS is no longer just a file storage or media streaming device, but also able to run other applications. 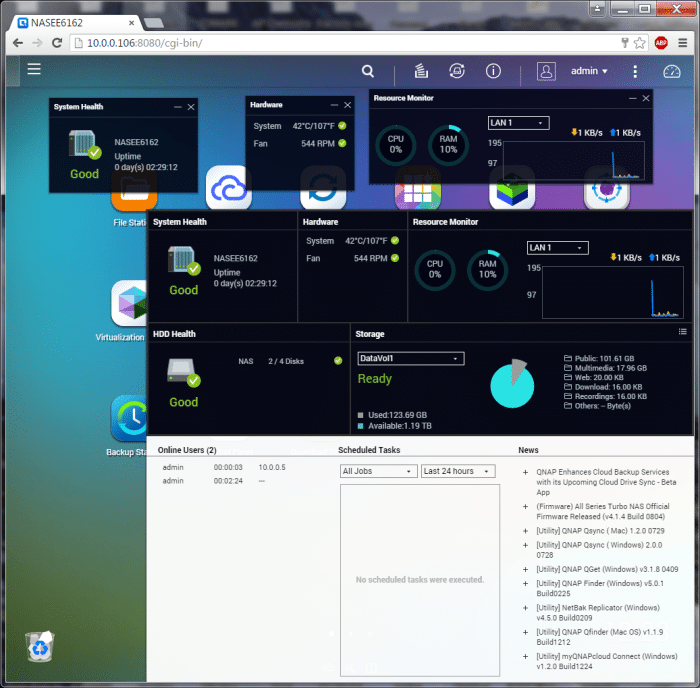 A new feature added to the latest OS is the new dashboard, located conveniently on the upper right corner of the the main screen. The dashboard displays important information such as system disk information and health, resource monitoring, storage space, scheduled task, device information, and firmware information. The panels on the dashboard can be detached and posted anywhere on the desktop. While the dashboard may not be the most exciting feature of the new firmware, it does provide very useful information for the administrator to monitor and manage the unit.

One of the biggest features that the 4.2 update brings is the recycle bin icon on the the desktop. Much like any desktop OS recycle bin, we can use it to recover files, or right click on it to permanently delete files off the NAS. QNAP has had the recycle bin on their NAS to recover accidentally deleted files but it was always hidden where data recovery requires use of the File Station app. The addition of the recycle bin is a definitely a welcome feature for sure.

QNAP’s file structure organization handles the deleted files/folders by moving the file/folder to a hidden @Recycle folder that is located under the same folder as the file’s original location. Thus, if you delete a file under the Public folder, it will just be moved to the @Recycle folder under Public. So, when you open the Recycle Bin, it actually just opens the File Station instead of a dedicated app and displays these hidden @Recycle folders. Under the Recycle Bin, we have the exact same directory tree layout as what is on the NAS, as it simply aggregates these @Recycle folders to one location so that we are seeing just the deleted files as opposed to the rest of the files stored on the NAS. This is different than what we typically see on the desktop system where we see the deleted file(s) without the file directory. This makes file recovery a bit hard since we have to remember where the files are saved previously in order to navigate to its location to recover them. Luckily, Qsirch will also index files in the Recycle Bin so we can quickly use it to find the file(s) we wish to recovery

[section_title title=Introduction to TS-451+] Introduction It is clear what QNAP is aiming for with the TS-451+ from the moment you open up the device, as the unit comes with a multimedia remote as the standard accessory. QNAP actually has had the multimedia remote that users can purchase separately as an add-on accessory that works with their NAS units with an integrated IR receiver. However, it has never been included as a standard accessory, but rather an add-on that users have to purchase separately. Thus, it is clear that QNAP is targeting this particular model of the NAS as a media server…
QNAP TS-451+
QNAP TS-451+
Victor Wu