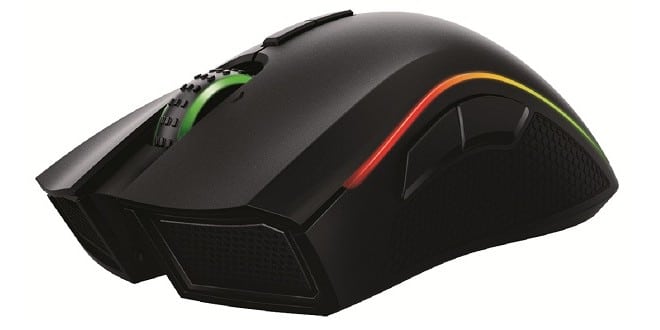 Before we get started on the Mamba we should warn you there’s a lot of image acreage to cover so bear with us as we cover as much of the Mamba as we can. 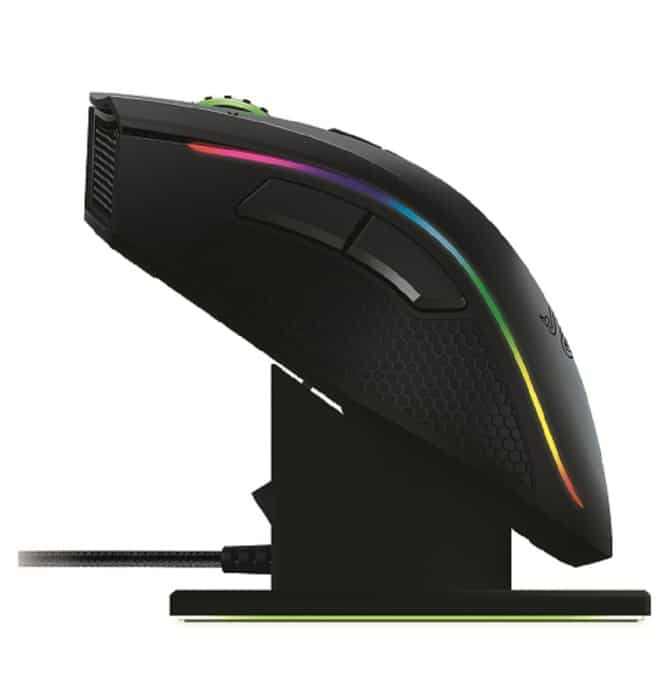 To start with the Razer Mamba just resting on its pedestal is quite an awe-inspiring sight, when the Mamba first arrived we got photos of it and our first instinct was to charge it overnight then it hit us we could just plug directly into the mouse and enjoy some 16,000 DPI goodness. It takes a minute for 16,000 DPI to sink in but we are living in an age when 3 monitors sitting side by side can rack up 4320 pixels you need to traverse across, Currently 16,000 DPI is a little much for most end users but at this pace who knows how many DPI we’ll need in the next couple of years. You can rest assured with the 16,000 DPI and 1000Hz Ultra polling and an impressive 1ms response time that your covered for DPI for the foreseeable future. 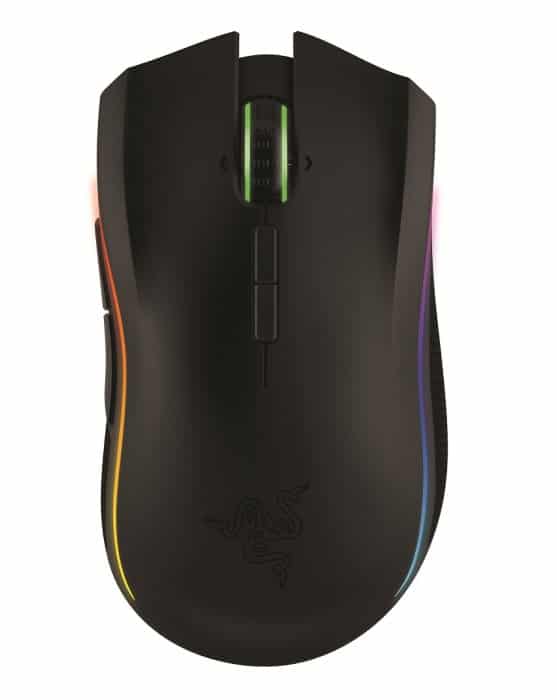 The Razer logo isn’t Chroma on the Mamba which shouldn’t really be an issue, it’s pretty on other models but realistically you palm covers the logo most of the time. The side strips and the scroll wheel are RGB and fully capable of emitting 16.8 million colors in various pre-programmed and customize-able ways. Just looking down on the Mamba you wouldn’t think there’s a mouse that can cover up to 210 inches per second at 50 G Acceleration/ We aren’t even sure the human hand can move 210 inches in a second but it’s nice to know if your domestic partner throws it at you the sensor can track the entire path to the lump on your head.

Shown without the wire attached on the button side you see two side thumb buttons positioned precisely where they need to be for a right-handed gamer, unfortunately this isn’t an ambidextrous mouse so it’s for right handed people unless you happen to be a lefty with good right hand skills. You really can’t tell from the photo but below the buttons there’s textured rubber grip and both sides have the rubber on them for easy gripping. We can only hope that the glue used is permanent because over time glue loses it’s bonding ability and we’ve seen other peripherals that end up needing to be re-glued.

Here on the right side of the Razer Mamba you can just barely see the texture of the rubber side grip and as we mentioned no right hand side buttons so lefties are a bit left out in the cold on this one. 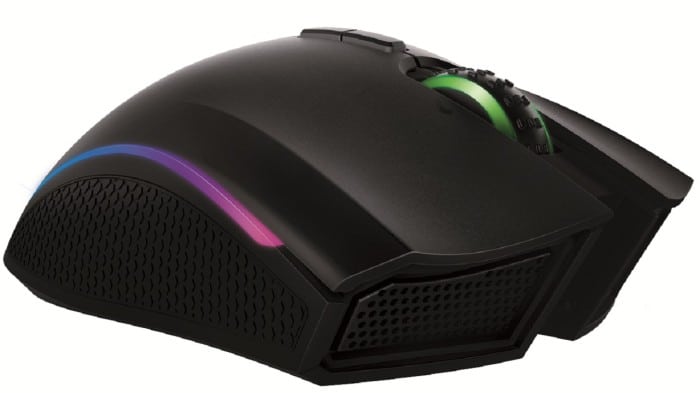 Getting up close you can see the lighted strip on the scroll wheel and both sides of the wheel light up and can be the same as the sides or you can customize a different color. In this shot the sides are doing the “Low power” wave and the scroll wheel is set at static green. Now we can tell some are scratching their heads saying “Low Power”. Yes when the Mamba is running in wireless mode the default is to go into a dimmer low power mode and you can expect around 20 hours use on battery power but that depends on the settings you use. No need to worry you can snap the wire into the front of the Mamba and game on marathon style and yes the Mamba charges while in wired mode so game on in wireless until the default 5% of battery capacity warning blinks at you. Once the warning (which is customize-able in length) blinks merely plug-in the wire and your good for another couple of cans of energy drinks worth of gaming. 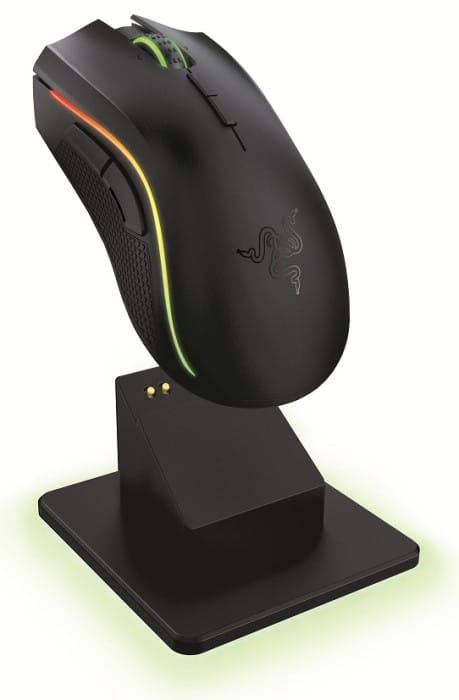 Once your hands are numb and your eyes are red and scratchy from gaming make sure the switch on the bottom is set to off and seat the Mamba onto the charging dock and your ready to game on once charged up. If you’re in wired mode and sleeps calling your name you can just leave the wire plugged in and the Mamba will still charge. What really amazes us about the Mamba is most gaming wireless mice can lag just a tad or go into a sleep mode if not moving, not the Mamba whether your wired or wireless you have Dual gaming grade wired and wireless.

Notice the two buttons right behind the scroll wheel, those are sensitivity up and down by default and you can change the increments of sensitivity in Synapse. We’ll go over Synapse in a little while. For to long now manufacturers have been making sensitivity software based but we have always been the champions for dedicated sensitivity buttons and Razer gives you that functionality on the Mamba. Of course if you’d rather you can set the front button to toss a grenade and the back button to duck once it’s thrown because all 9 buttons on the Mamba are fully programmable and if you choose can trigger a Macro you design yourself. 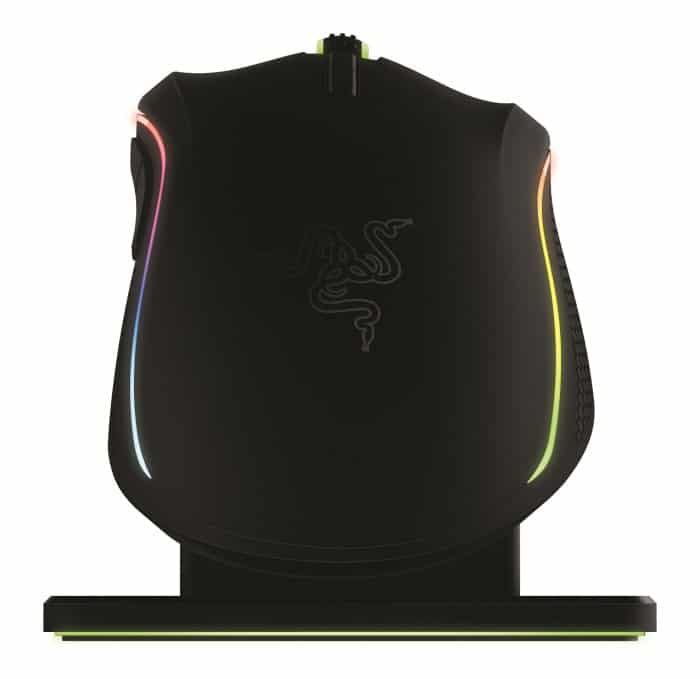 In this shot you can see the non-Chroma Razer logo and in a way we sort of miss the added beauty of a Chroma logo but Razer packs so much technology into the Mamba it would be our guess that to keep costs down on this epic mouse they had to leave Chroma off the logo. On the flip side of that coin when the Mamba is running in wireless mode the base has its own light and the lighting effects of the base almost make up for the unlit Logo. 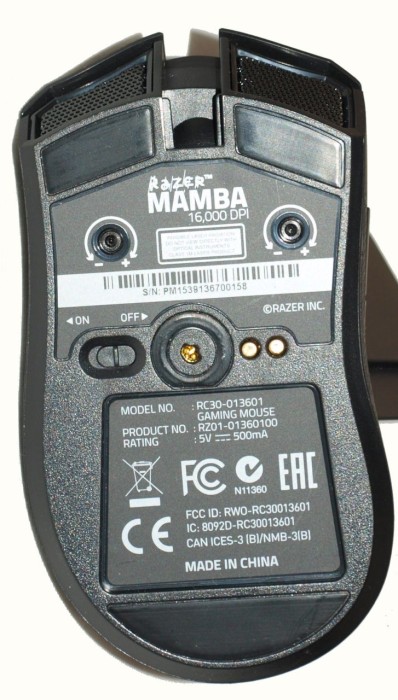 The bottom of the Mamba shows you how much is going on with this mouse. The top proclaims it to be a Mamba with 16,000 DPI then right below it you see the two adjustable click ports. Insert the included tool and clockwise it increases the force to click, counter-clockwise and it gets easier to click.The off button is for wireless mode and for charging when the wire is connected but you’re not using the Mamba, we would suggest setting it to off when not in use to prolong the battery life. To the right of the on/off is the 16,000 DPI laser sensor which is customize-able in the lift off setting. Most mice if you lift it up to move them they try to trace while in the air and it can move your pointer wildly around the screen, the Mamba can be set to 1mm off the surface and it stops tracking. To the right of the sensor is the two charging plates and below that is the warnings sticker and FCC ID info. Of course there’s three Teflon feet and we highly recommend a high quality mouse pad or mat as just running the feet over your desk surface might scratch and mar the feet resulting in a less smooth movement when gaming.

Here’s the docking station with the wire plugged into it like you would for normal wireless mode and it also shows one real concern. The wired and wireless design is revolutionary and changed the way we look at mice forever but having that design Razer needs to work on the connector end of the cable. You just about have to pull on the rubber coated portion of the wire to get the connector out of the dock and pulling on any wire is just something you don’t want to do. At some point down the line you could damage the cable so we suggest caution when switching modes. Just a FYI the cable on this beast is 7 foot so if you happen to be a front room warrior you can move the wireless receiver up to 7 foot from the computer and sit back on the couch as you wirelessly go for that head shot your enemy will never see coming. 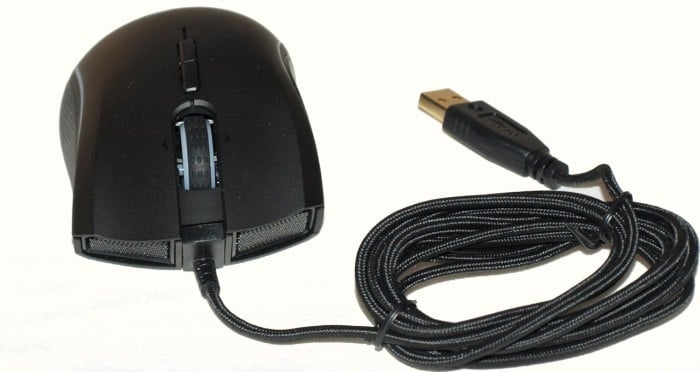 Here we are from the front end of the Mamba and you can see how seamlessly it fits into the mouse and you can understand our concern for having to pull on the wire itself. It might be best to game wireless as much as possible and only go wired when the battery is low. It’s not really much of an issue for us because we gamed for hours on end both in Path Of Exile (a fun but obvious knockoff of Diablo 1) during which in cruel mode you are constantly on the mouse buttons fending off hordes of disgusting monsters and never once did we outlast the battery on the Mamba.

Notice the tail of this mouse is so long that we had to use wire ties to keep it under control for the photo shoot, From the side here you can also see how flush the connector is. We gamed endless hours of Path Of Exile and SkyRim both have drastically different mouse needs and Razer is counting 9 buttons but it’s two side buttons, two top buttons, the Sensitivity up and down and the scroll wheel so they are fudging a bit and counting the scroll wheel as more than one. It’s more like a multi function button/scroll wheel. Still it does have right and left click on the scroll wheel but it takes some getting used to not activating the wrong click on the scroll wheel but once you get the feel for it you find it;s one really handy well thought out button and will end up using it probably more than the side buttons.

The Razer Mamba is one of the most accurate, deadly and customizeable mice we have ever seen, either have one at your gaming shrine or hope your opponent doesn't!