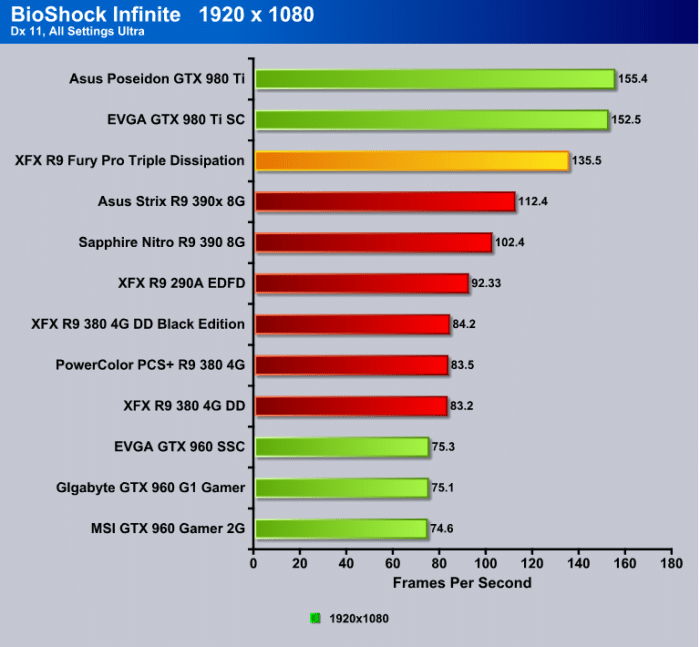 Here at 1080p we hit 135.5 FPS with the XFX R9 Fury Pro Triple Dissipation which puts it at 3rd place behind the two more expensive GTX 980Ti’s. 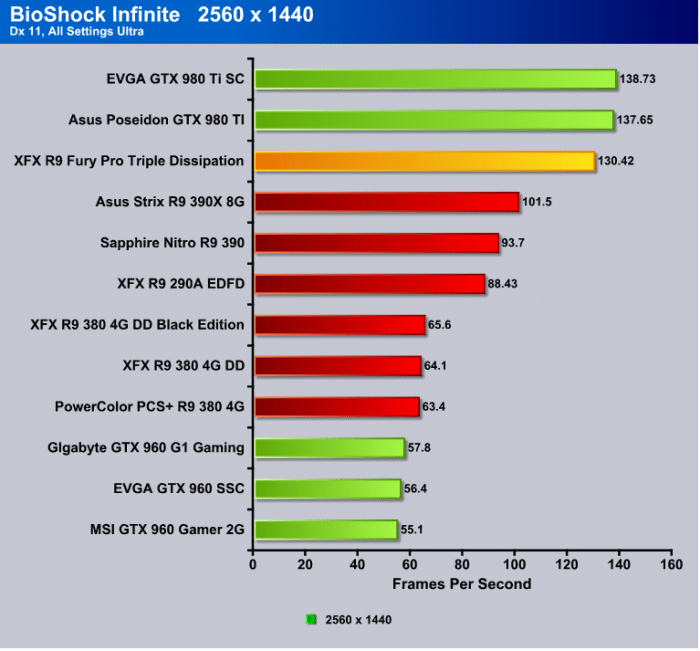 Notch the XFX R9 Fury Pro Triple Dissipation up to 1440p in Bioshock and it barely missed a stride and drops 7 FPS to 130.42. 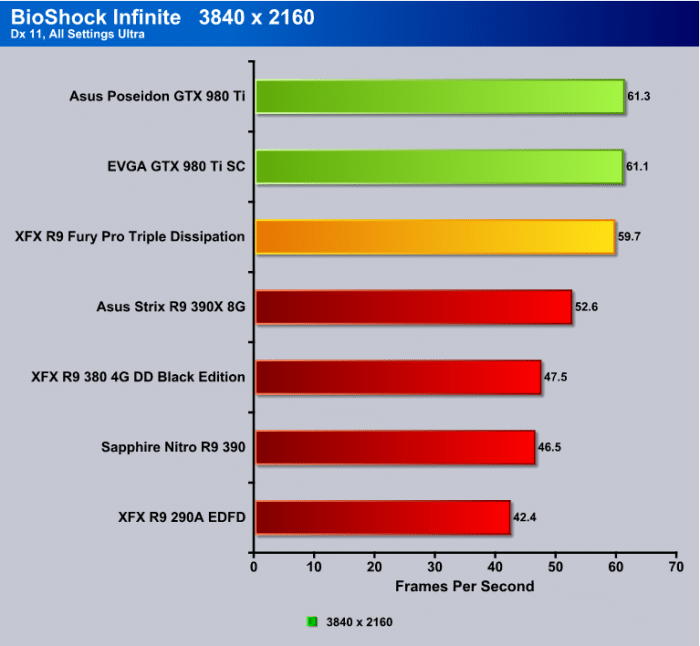 BioShock Infinite wasn’t a problem for the XFX R9 Fury Pro Triple Dissipation and even at this uber resolution it hits 59.7 FPS making BioShock one of the more well optimized games on the Market. 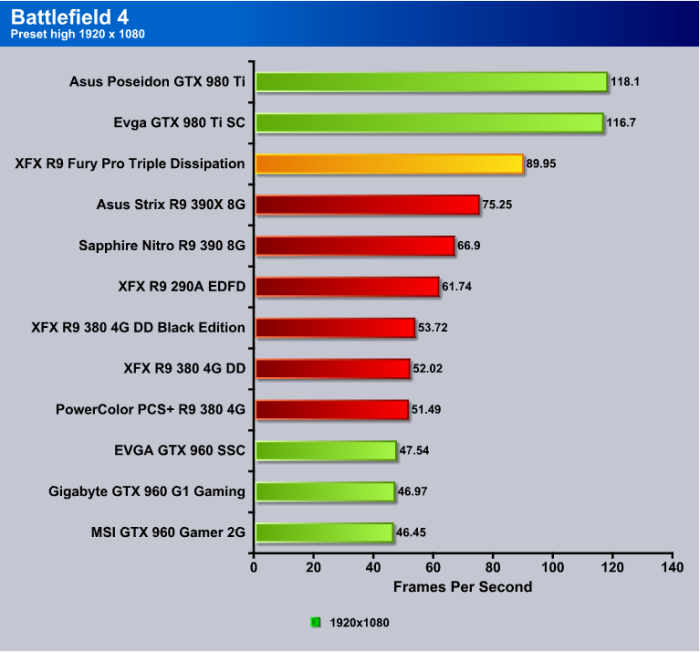 In Battlefield 4 the XFX R9 Fury Pro Triple Dissipation hits a respectable 89.95 FPS coming in ahead of its closest relative one the charts the R9 390X. 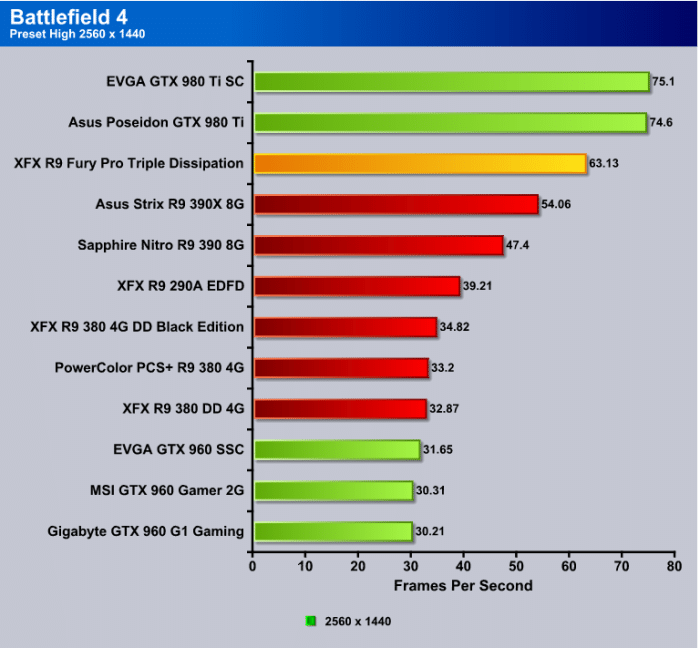 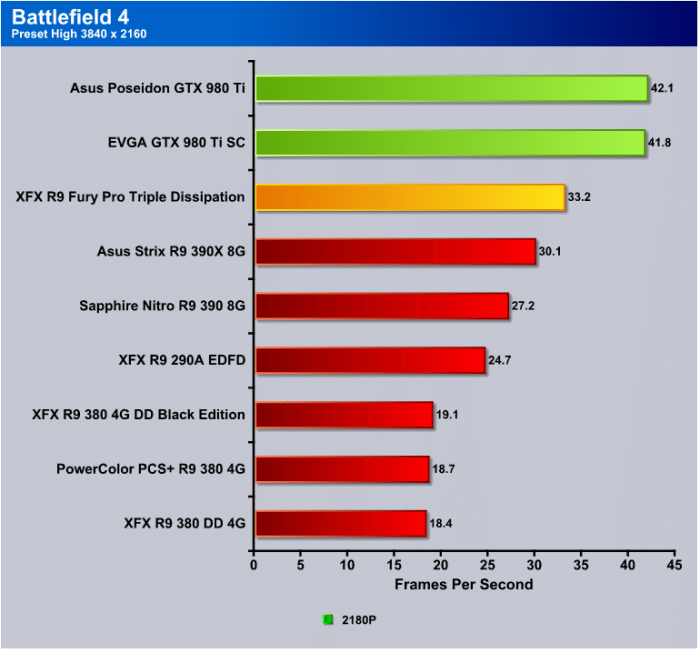 Knock Battlefield 4 to the 4K resolution and we got a 33.3 FPS from the behemoth XFX R9 Fury Pro Triple Dissipation maintaining its traditional 3rd place ranking on our charts. 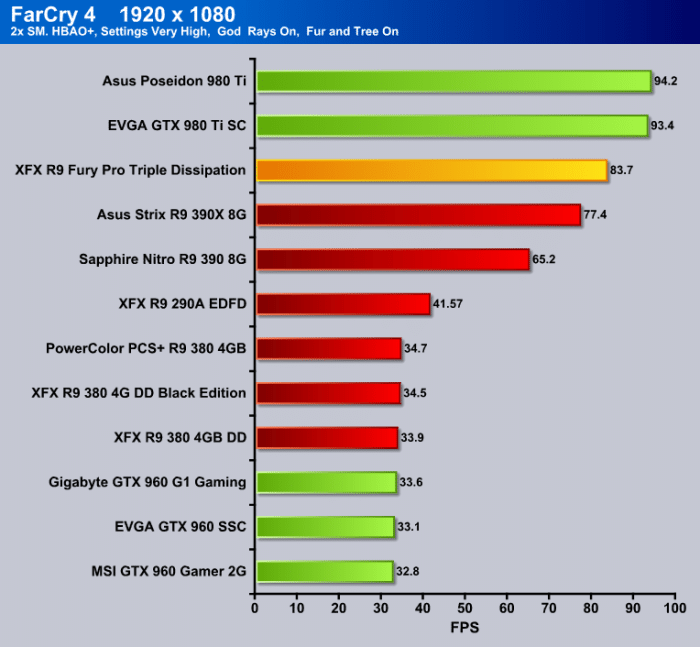 FarCry 4 has been a staple in video card testing for a while and at 1080p the XFX R9 Fury Pro Triple Dissipation has no problem knocking back 83.7 FPS. 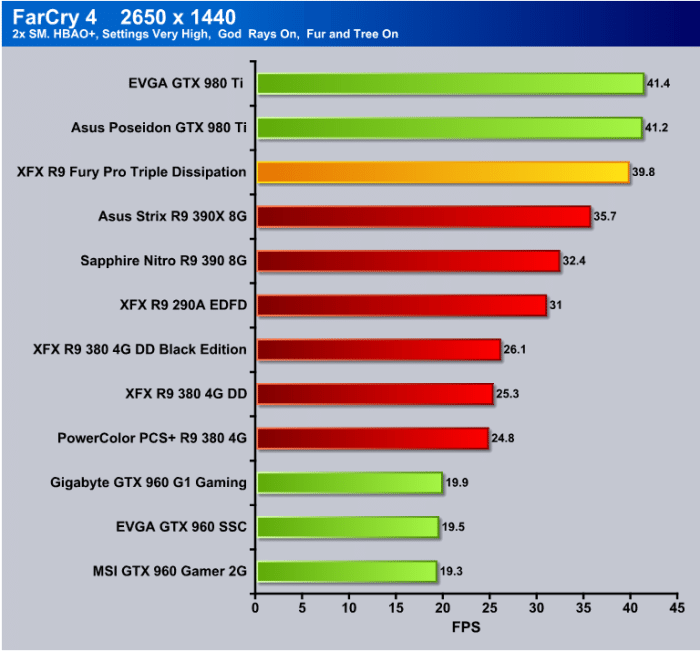 Crank the resolution up to 1440p on FarCry 4 and things start getting nasty hard for the video cards and only the upper tier cards can play FarCry 4 with all the settings cranked up. The XFX R9 Fury Pro Triple Dissipation ran a 39.8 FPS so it’s holding its own so far but lets take a look at 4K. 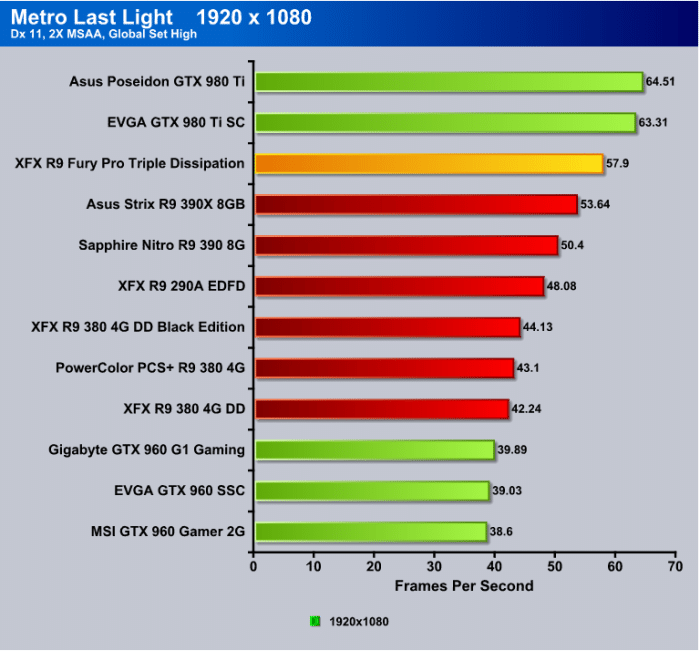 Metro Last light the 1080p resolution wasn’t even a small challenge for the XFX R9 Fury Pro Triple Dissipation and it rocked 57.9 FPS which just shows you how demanding PC games are. Of course a lot of PC games are console ports, so many that we’ve lost track, and ports are notoriously bad at being optimized. Console games tend to have such lower graphical details utilizing APU built-in graphics capabilities but then they port them to PC and scale up the graphics richness without consideration for the excessive load put on expensive GPU’s. In our humble opinions it’s the game designers that need to produce games capable of running current hardware that it is Video cards trying to chase poorly optimised games. 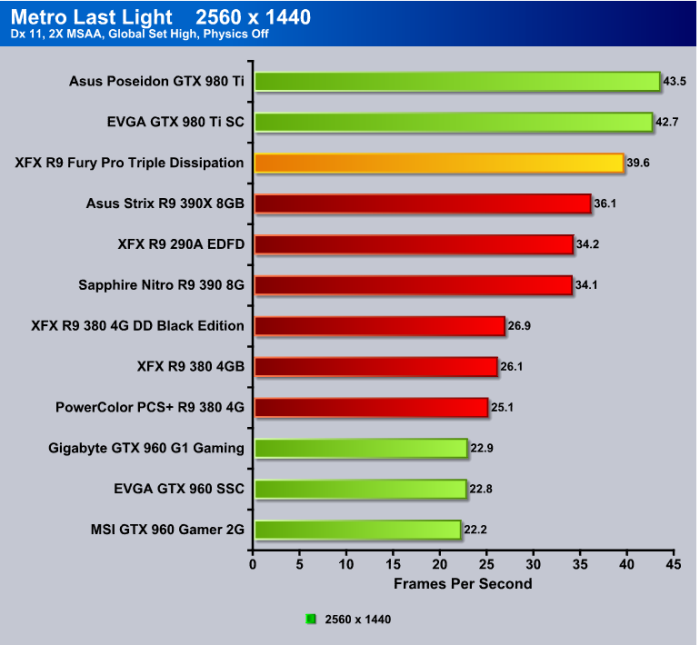 Metro runs well on the XFX R9 Fury Pro Triple Dissipation at 1440p and the massive card hit a 39.6 FPS and we would guess it’s not really built for 4K so we left testing at 1440p. 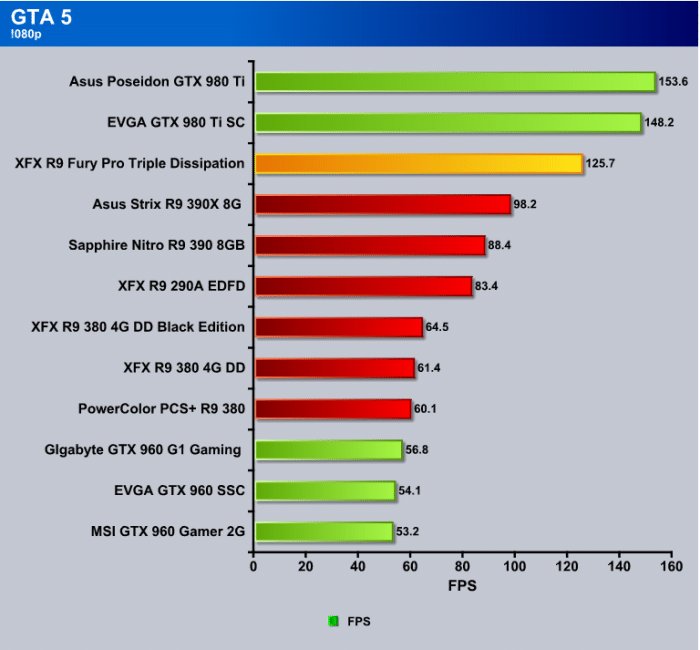 From the looks of it GTA 5 is pretty well optimized but there are so many different settings you could easily crank GTA 5 up to video card crushing levels. We went with a Very High philosophy on GTA 5 and it’s paid off in FPS and the XFX R9 Fury Pro Triple Dissipation threw out an amazing 125 FPS, 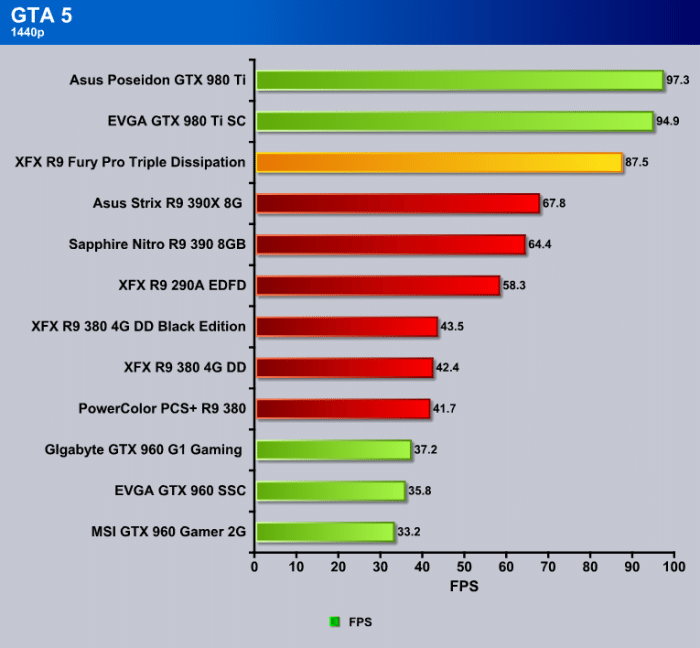 We hit 1440p in GTA 5 and the XFX R9 Fury Pro Triple Dissipation hit 87,5 and the lower tier enthusiast cards did ok but would obviously buckle at any higher resolution.