We take power readings at the wall socket using a KillAWatt voltage measurement device and this is total system power. It’s the same test system we have used on all the GPU’s on the charts so you get a good idea of the power draws from Each GPU. We load the machine and let it run for about 15 minutes so all the Windows background tasks have completed. We have Windows 10 fully updated and for the duration of testing we have the Windows Update Service disabled. Once Windows has finished its house cleaning tasks we check the temperature using GPU-Z, then fire up MSI’s Kombuster and run the GPU up to 100% core usage and let it run at that for 10 minutes then take the Load Power Consumption. Ten Minutes gives the video card time to heat up some and gives us a good solid power reading at load. 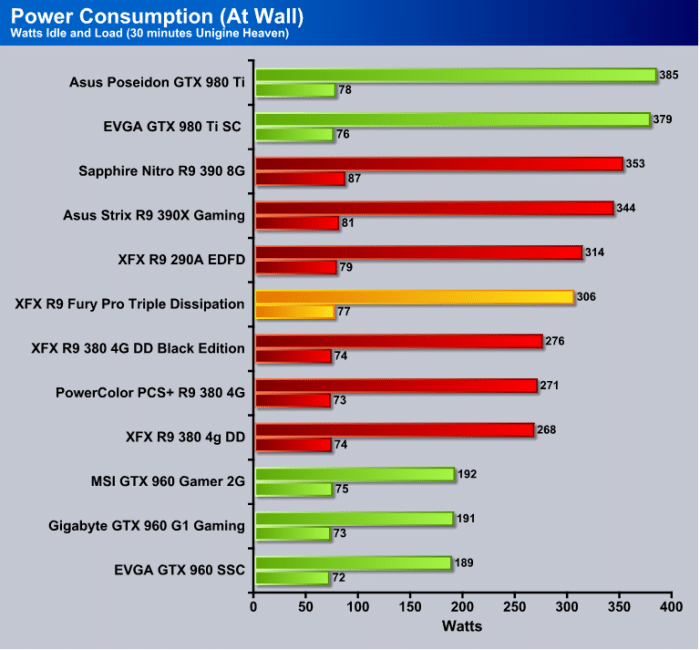 We all hate noisy or whiny fans that intrude on our gaming / computing time. We run several noise level tests, Complete Idle, spiking load where the graphics load fluctuates between high and low load, and high load. We generally record sound levels sitting next to the tower with the tower at floor shelf level. We put the decibel meter 1 meter away from the front edge of the board level with the edge. To better get an idea of what the sound compares to here is a scale of typical sound levels.

We use a triple radiator water cooling system on our Z170 test system that uses 3 whisper quiet fans with no one in the closed silenced room we measure the system at an Idle which turned out to be a comfy 31dBA. After we measure the idle noise level we run the GPU (core) up to 100% utilization using Kombusters Lakes of Titan on the 16x tessellation setting. We let Kombuster make a complete run until the green indicator on the bottom of the screen has completely crossed the screen (about 5 minutes) then using the default fan profile we measure the noise which turned out to be 42dBA an entirely acceptable level. We measure the noise 1 Meter from the front edge of the board level with the edge. 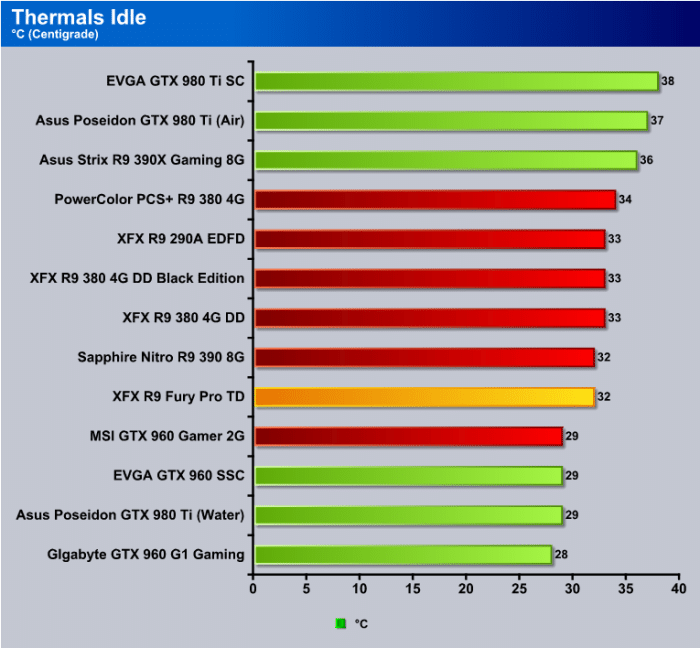 We were rather shocked at the Idle temp coming in at 32°C and we chock that up to the Triple Dissipation cooling design with the 8mm heatpipes doing an extremely effective job of cooling. 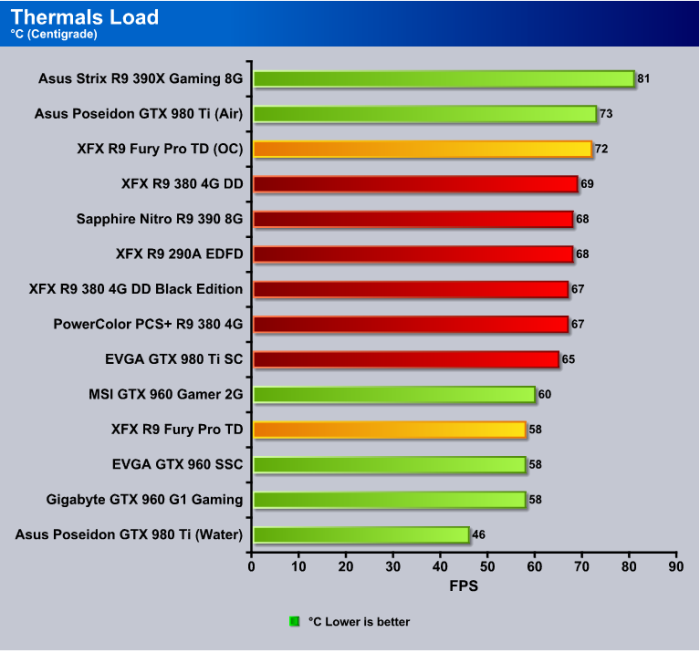 Here again the top end thermal reading we got for the XFX R9 Fury Pro TD when not overclocked was 58°C which was a rather eye-popping low reading and we don’t normally record OCIng thermal reading but this card ran so cool at stock speeds we went ahead and recorded the OC temp and with the core clocked 83MHz over and the memory 80MHz over we hit 72°C or a 14°C increase for that small OC. Running 14°C hotter for that small an overclock might be why the OC on the card is rather limited, There’s a ton of shaders on a huge 596mm² Die so even that slight of an increase on the core seems to be producing heat at a geometrical rate which would indicate the core also needs exponentially more power to go any higher.