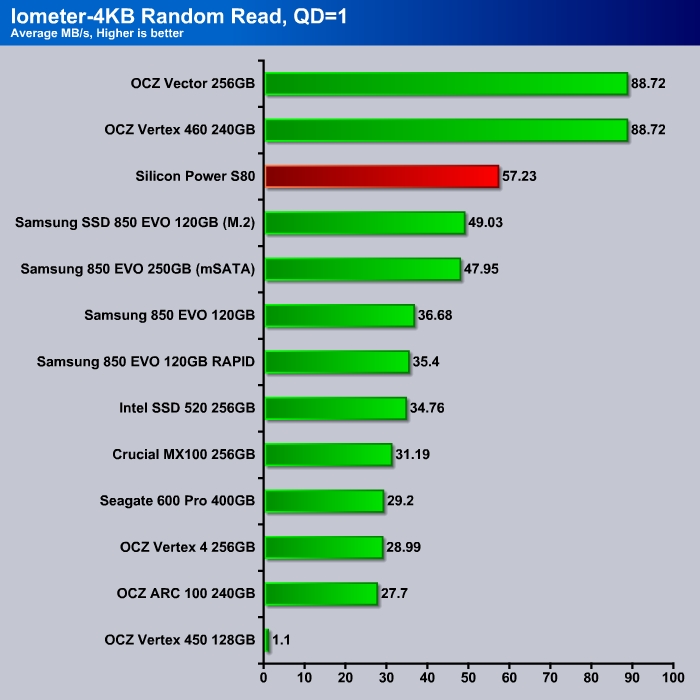 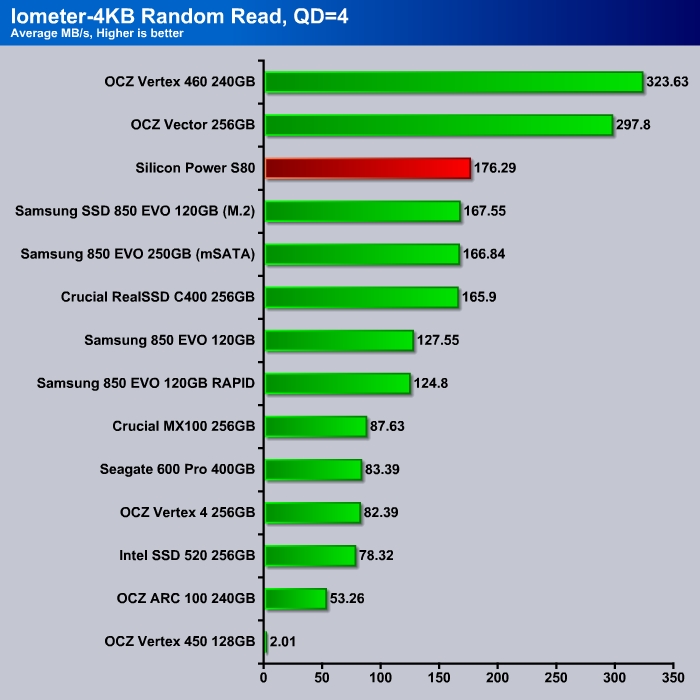 Random read performance for the Silicon Power S80 is good. The drive is fastest among the budget SSDs. 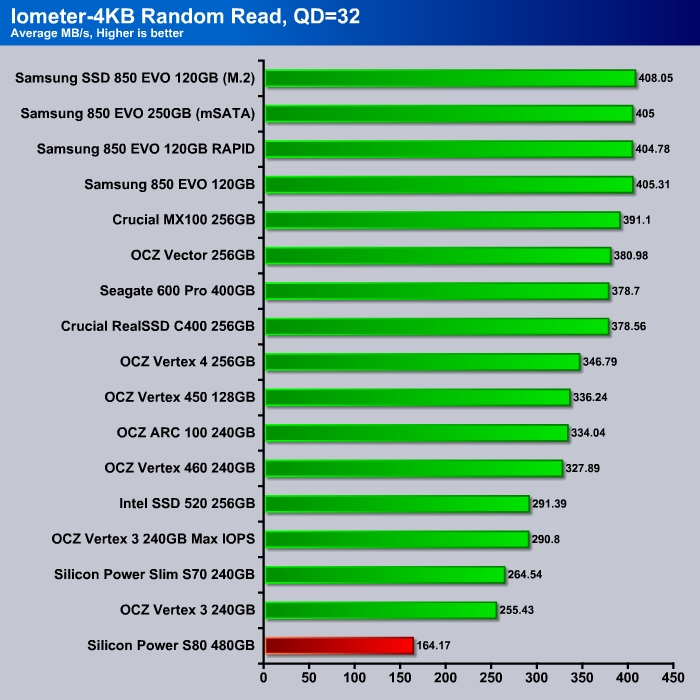 Unfortunately, the drive falls behind the competitors at higher queue depth. While other drives tend to have better performance at higher queue depth, the S80 seems to have saturated at 160 MB/s. Average desktop computer probably would never stress the drive at such high queue depth so it is not something that we would put much of a concern. Though, it is clear that the Phison PS3108-S8-I controller is never meant for high-end server or enterprise market due to its bottlenecking at high queue random read. 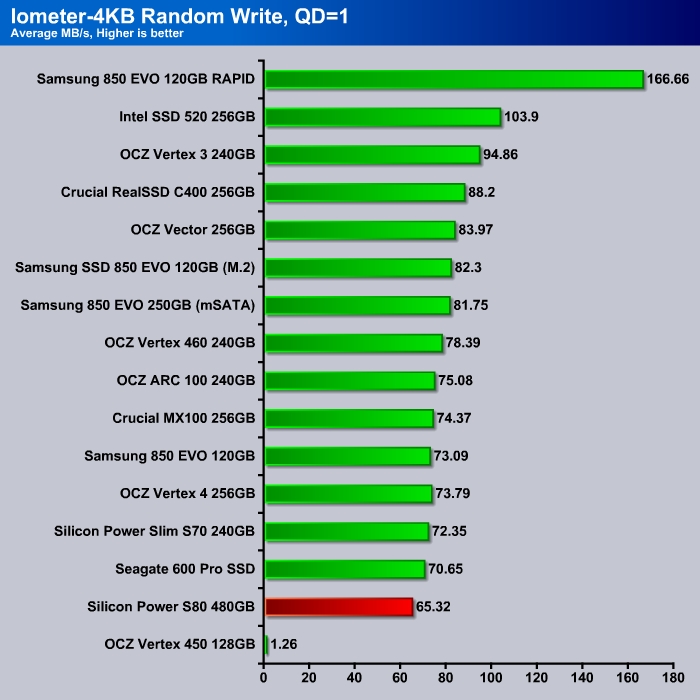 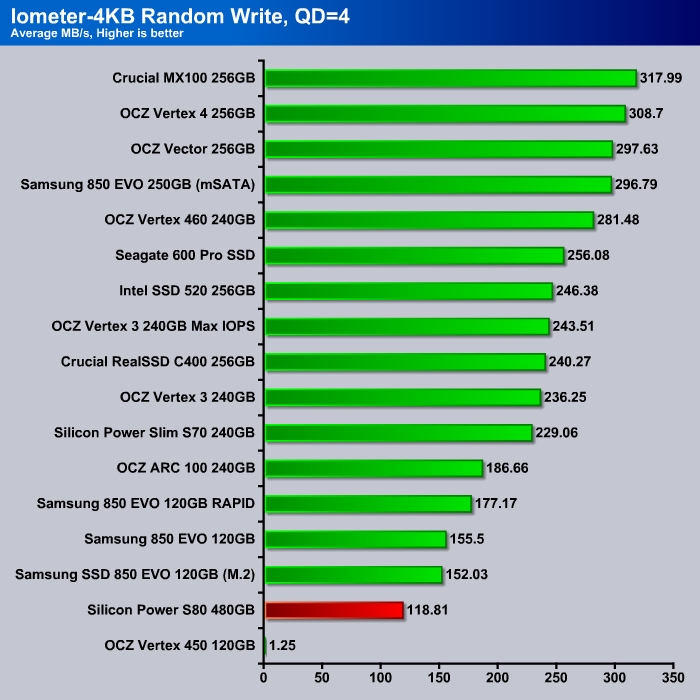 Random write, however, is not working out so great for the drive. Here, the drive is significantly slower than its competitor. At typical desktop workload, the drive manages to only yield 120 MB/s, significantly slower than even some of the 120GB drives such as the Samsung 850 EVO. This is definitely another area where the Phison controller is not able to compete against the more well-known controllers such as SandForce or Indilinx. Notice that many of the older drives are even able to yield better results here. 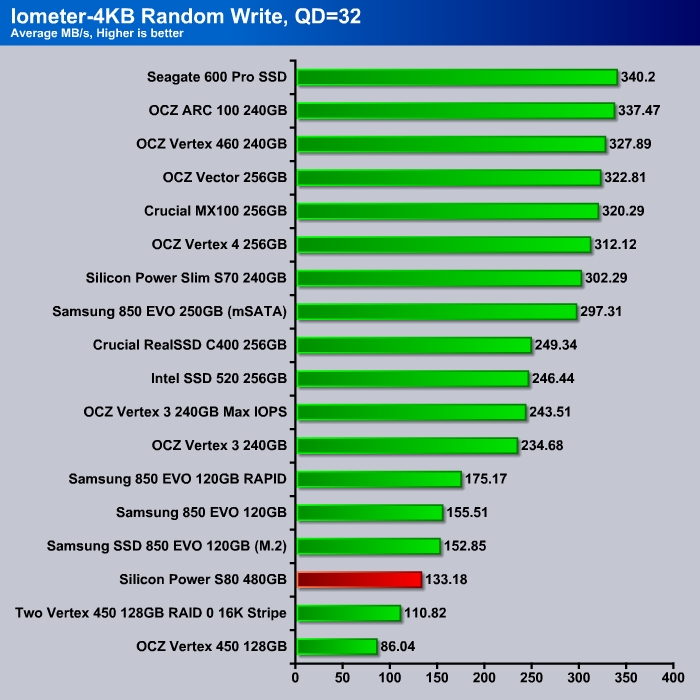 Higher queue random write again is not working great for the Phison controller as it tops off at 133 MB/s. 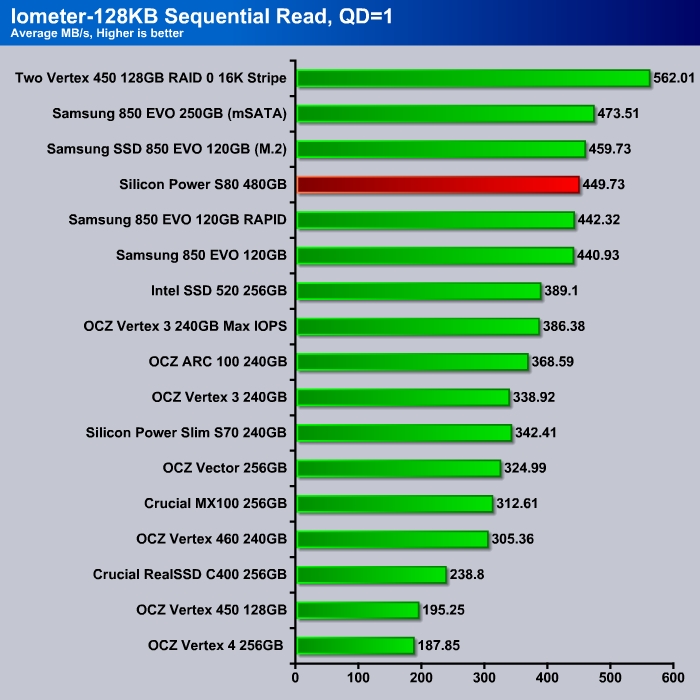 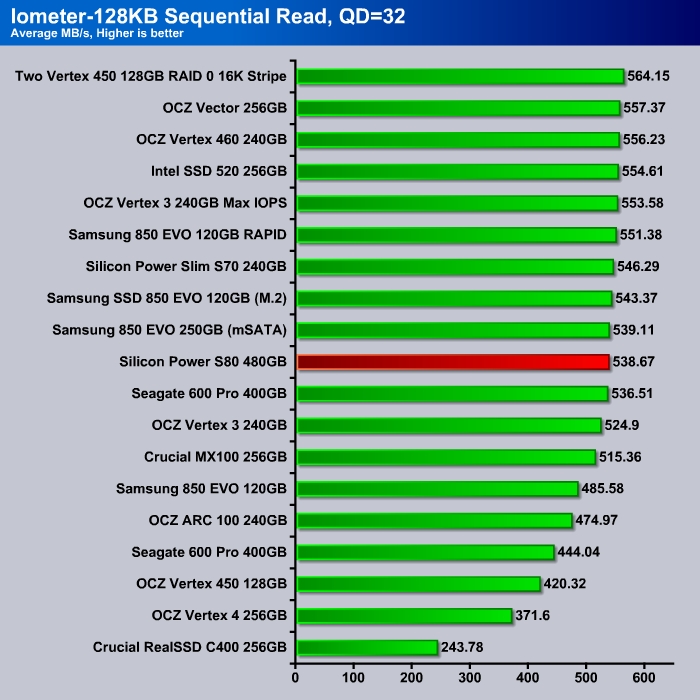 The drive does well in the sequential read with 449 MB/s at queue depth of 1. Even at higher queues, it still manages to performs quite well at 539 MB/s. 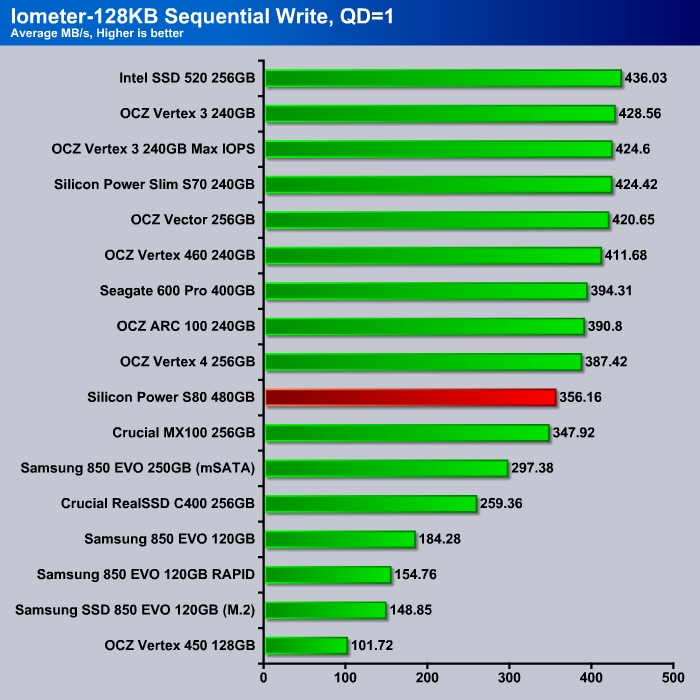 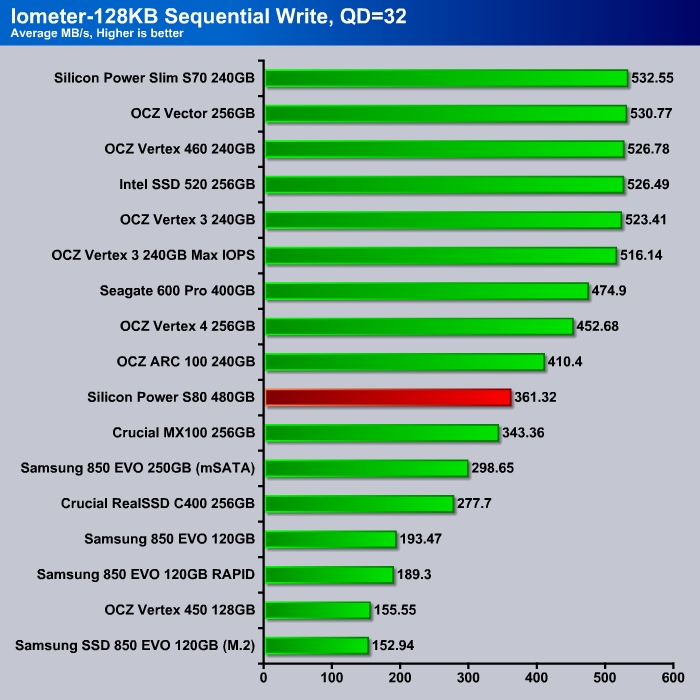 Sequential write, unfortunately, is lagging a little behind the competitors with 356 MB/s at queue depth of 1. Higher queue depth sequential write again is not working great for the drive where it only edges out the 256GB Crucial MX100 by a little and is behind other 250GB drives on the market. 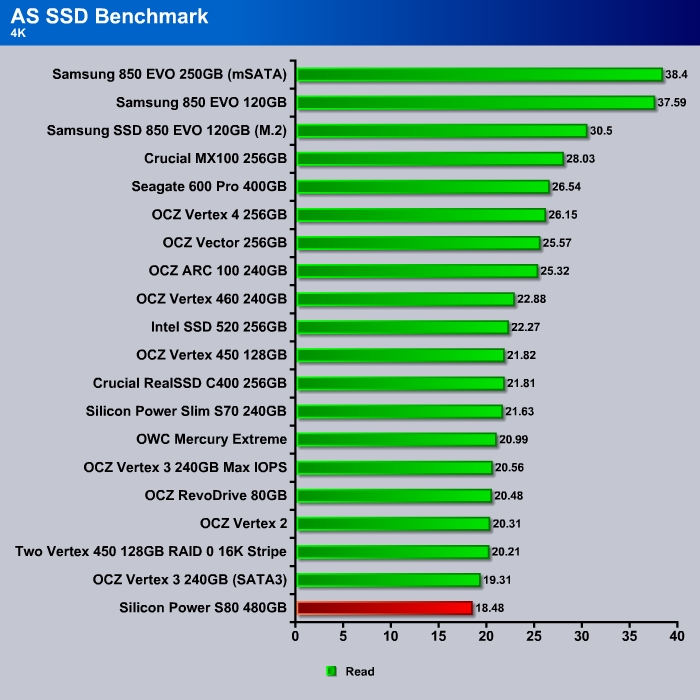 Not a great start for the drive with the random read. The drive is slower than many older drives that we have tested. Most of the current generation budget SSDs are at least 30% to 40% faster than the S80 when dealing with random read. 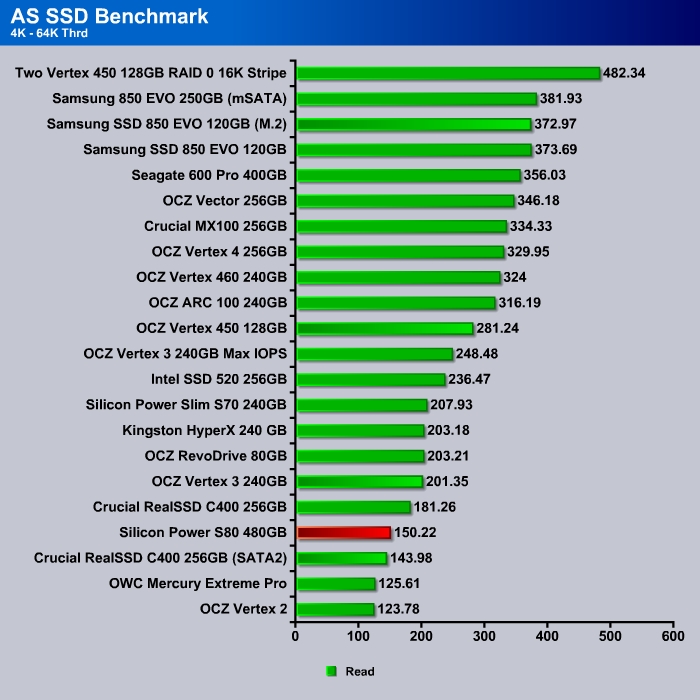 The performance gap is even wider at higher threads where most current drives are able to perform at double of what the Silicon Power S80 is able to. 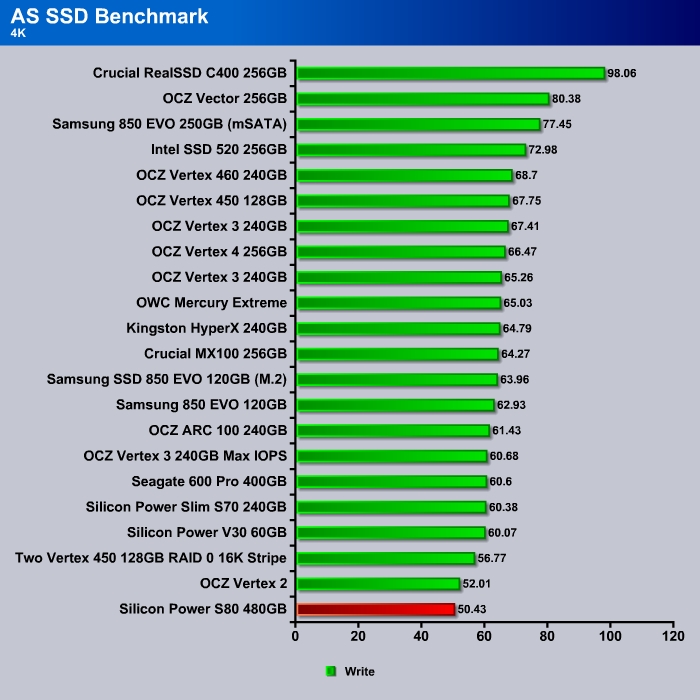 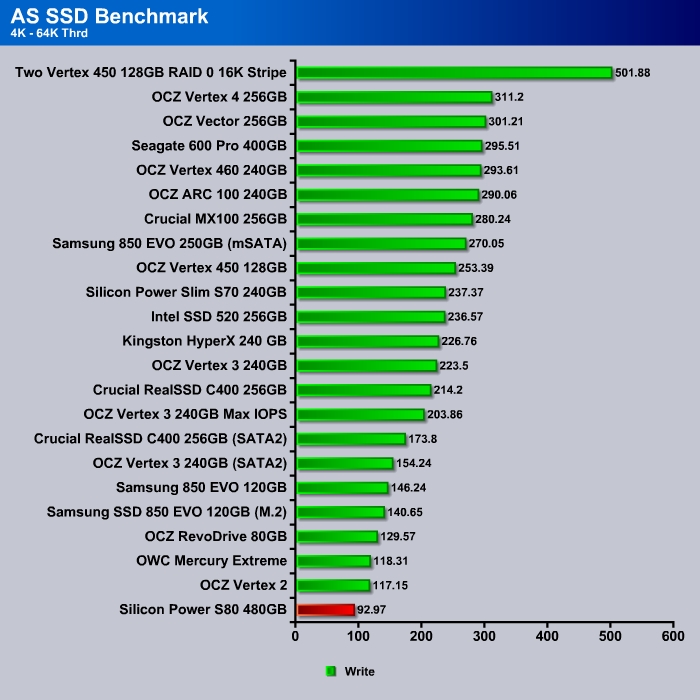 Random write again is the Silicon Power S80’s Achilles’s heel. While the drive is clearly faster than any mechanical drive, it is simply slower than other drives. Most budget drive such as the OCZ ARC 100 or the Crucial MX100 are at least 20% faster than the S80. 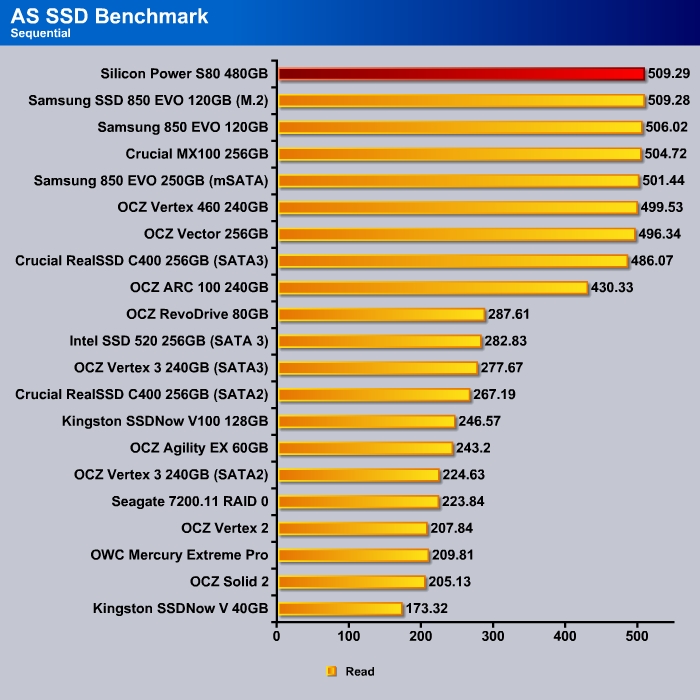 it is not all bad news for the S80 as the drive bounces back to the top of the chart in the sequential read. 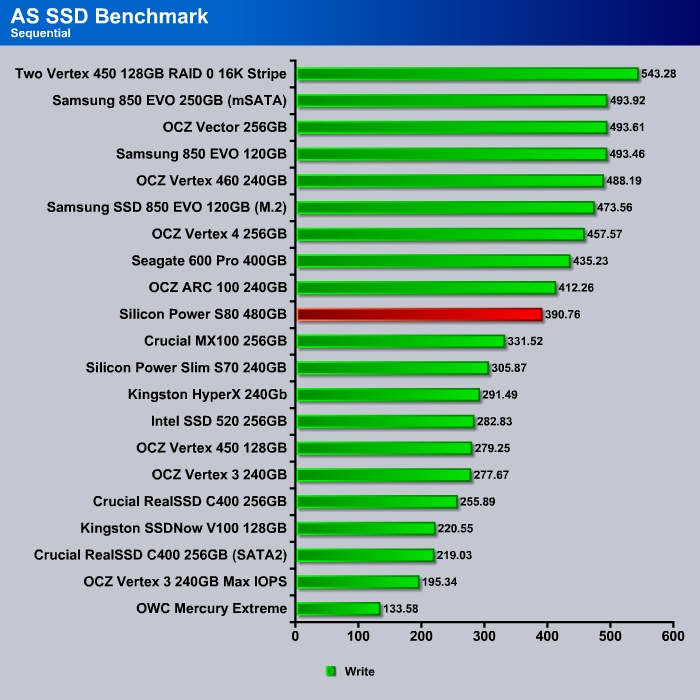 Though, the sequential write again falls behidn the competitor.

[section_title title=Intro to The Silicon Power S80] Introduction The market for SATA solid state drives has matured. Over the last couple of years, the price for the drives has been in a steady decline. If you have been keeping up with our SSD reviews, you would no doubt notice that there are many good budget SSDs on the market today. Many of the budget SSDs such as OCZ ARC 100, Crucial MX100, and Samsung 850 EVO, deliver excellent performance at affordable price. As technology advances, the reliability for the SSDs have also gotten much better. Thus, there is absolutely no…
Silicon Power S80 480GB
Silicon Power S80 480GB
Victor Wu

The Silicon Power S80 pair the Phison controller with the 19nm Toshiba NAND. The drive offers excellent sequential read and good random read. Unfortunately, its write performance is bottlenecked by the controller, which hinders otherwise a potentially good budget SSD.