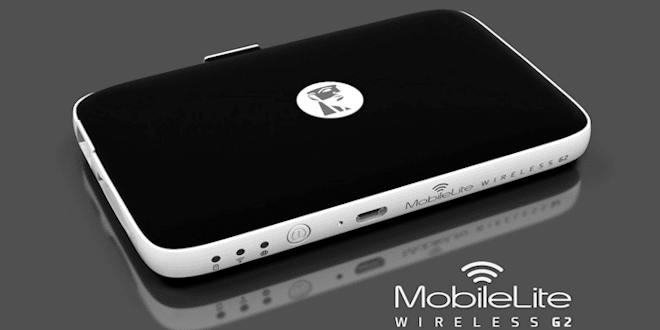 The Kingston MobileLite Wireless G2 is a small media reader that broadcasts a WiFi signal that just about any WiFi enabled device can receive. You can plug-in various storage media and have your files easily accessible to most WiFi capable devices. The MobileLite G2 will also piggyback your internet WiFi so you are both connected to the Media Reader portion and the Internet.

Once in a while you see a product that makes you do an instant face palm move, it’s so simple and elegant in its design and solves so many of the problems that you’ve worked around and taken for granted that it’s hard to wrap your mind around. The Kingston MobileLite Wireless G2 is one of those products.  I think everyone that has embraced technology or grudgingly accepts it as an evil necessity all have storage issues. You have music you need on your phone and would like to access it on your desktop and tablet. Maybe a movie or two for those boring moments during a commute or some work files that you are constantly having to sync across 35 devices and wondering if you have the most updated version. The Kingston MobileLite Wireless G2 solves many of those problems and more, I hate to go cliché on things but it is truly like having a personal Cloud in your pocket but avoids all the “Cloud Hassles”.

These are the “Kingston Listed” features and benefits so lets address the elephant in the list first. “Features Ethernet port for broadband internet on the go”, if you need an Ethernet port is it really broadband on the go or is it broadband on the stop? I suppose if your device isn’t WiFi Capable you could link it to an Ethernet patch cable and access the Internet that way but we would simply recommend a Ninja Blending system test on the non WiFi device and a quick trip to the 21st Century to pick up a WiFi device.  I guess if your WiFi decided to go postal on you and a driver got corrupted it would be handy, or perhaps as a home streaming media reader setup. Like I mentioned earlier the device encompasses so many potential problems it’s hard to get your head wrapped around it.

Once the link to the Kingston MobileLite Wireless G2 is established it’s a true two-way connection you can read the files on it and upload files to it so it becomes the equivalent of a Man Purse for files. It rather reminds me of the Data Disks on characters backs in Tron. I tried streaming media to 8 devices simultaneously from various spots as far away as 60 feet and had no problem with streaming to any of the 8 Devices. The problem I have now is the “Is that little WiFi device plugged in” questions from coworkers and family. I have one simple answer for them, “It’s mine all mine you can’t have it go buy your own”.

Not only does it provide WiFi Streaming and upload capacities it will also sacrifice itself and charge your Smart Phone up to two times, freeing you from being a Wall Hugger in the Airport concourse. By itself the built-in rechargeable battery will operate the Kingston MobileLite Wireless G2 up to 13 hours, charge your cellphone and that duration will be impacted but in today’s connected world if your cell phone goes down you may as well don an animal skin loin cloth and hunter gather dinner.

Kingston lists mainly USB drives and forms of SD cards as supportable media and in the next sentence; the MOST DEVIOUS AND UNDERSTATED ONE, it says supports standard USB drives. What most of us are going to think is that it will support Micro SD cards and Flash drives. It may be an undocumented feature (at the time of writing I have feelers out to Kingston to see if using external hard drives is an undocumented feature) but I connected several self-powered USB 2.0 and USB 3.0 large storage capacity devices (from 1 – 4 TB) and the device took a second or two to index the drives then like a champ gave me tons of local storage broadcast on a secure personal WiFi Network. I also tested non powered external (2.5 inch) drives and the Kingston MobileLite Wireless G2 merely sneered at me and said “Here’s your files”.

Just a couple of minor things to touch on here. I believe Kingston is saying that those type files are native supported on the Mobile device software. I stored every file type I could find in my extensive collection on the drive and those files played on mobile devices but it accepted any file I wanted stored.

Wireless security is not the default option and I highly suggest you enable it. I will show you where to activate it a little later on.