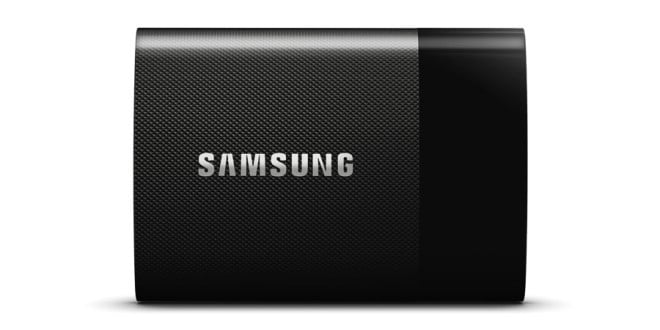 Samsung launched the Portable SSD T1, a SSD external portable storage. Due to price, most portable storage uses mechanical drive as oppose to SSD. While USB Flash drive uses flash based memory, they are often small in the storage capacity. As we all are aware, the transfer rate for the mechanical drive simply cannot compete with an SSD, so the Samsung Portable SSD T1 is aimed to deliver the best performance for a portable drive without sacrifice storage space.

Samsung is well known for promoting in house components as it not only makes consumer products for end-users such as laptops and smartphones but also various components inside these devices such as memory, storage, processors (SoC) and others. The internal for the T1 uses the recently launched 850 EVO. The 850 EVO uses Samsung’s 3D V-NAND technology that delivers impressive result. The T1 has a rated sequential read and write of up to 450 MB/s. Random performance is rated for up to 8,000 IOPS read and 21,000 IOPS write. The drive uses USB 3.0 and supports UASP mode. It is also packed with all of the features found on the 850 EVO, including AES 256 support.