Blizzard has a special was of not just launching a new game but making it an experience. After being at the Heart of the Swarm event mere years ago I can say this not only stepped up the game but blew it off the map as the new Starcraft II Heart of The Swarm midnight launch was more of a festival or celebration than your standard launch event. 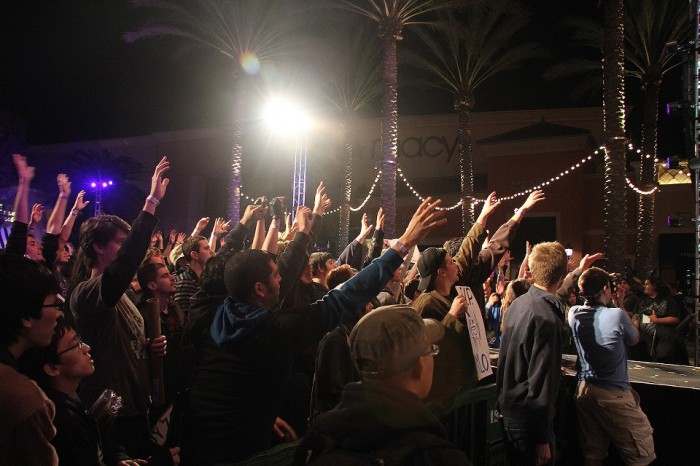 As you can see the Blizzard launch event is not your standard hum drum event of just standing in front of your favorite game store waiting for midnight release. Blizzard has a very interesting way of making sure that anybody who attends gets not just a show but one hell of a party to attend if you brave the wild crowd to get in on the action. 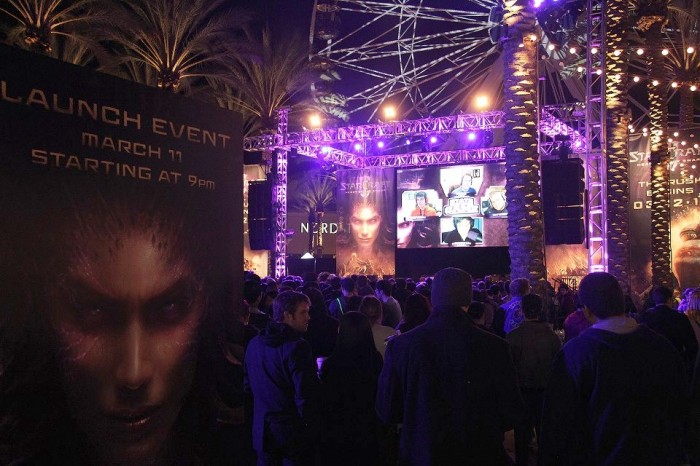 When we first arrived it was a bit before the image above and it was actually a bit before the event had started but needless to say this gives you an idea of what it is like to be there, and even with press credentials allowing closer access sometimes you can get pushed back some by the amassed crowd. The event is held at the Irvine spectrum technically the GameSTOP in the Irvine spectrum but as you can see the event is much larger than can be contained near the store which means it was setup in the common area of the Irvine spectrum center in Southern California.

But im not in Southern California…

One very cool aspect of the way Blizzard does these launch parties is that while it may not be exactly where you are they do hold multiple across the country, especially in their main markets such as Korea/Taiwan, and also of course the Irvine event as that is where their home base is located just a short jaunt from where this event happened.

Even if your not local to the event Blizzard offers live streams you can watch online of the event so that you are not left out and can stay up on the action no matter your locale.

Live events what is there to see?

Anybody who has ever been to a gaming event such as Comic Con, PAX or even some smaller events knows that the gaming community is absolutely nuts when it comes to supporting games and developers alike. If a developer is lucky enough to garner such a following as blizzard has you can even get some cosplay attendees who dress up as their favorite characters and will pose for attendees pictures and just add to the depth of the overall experience. 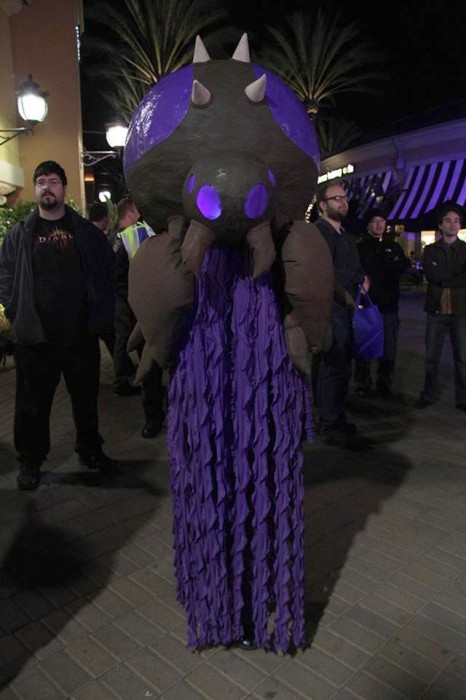 Here is one such character which was mocked up as a Overlord from the Zerg race, which honestly is quite fitting as the Heart of The Swarm title is based on the Zerg storyline or more importantly the Queen of Blades.

On a side note I do feel bad for this girl as that Overlord outfit looked quite uncomfortable due to its size, but she was a trooper showing the gaming spirit and I don’t think I saw a moment where she was not in character. 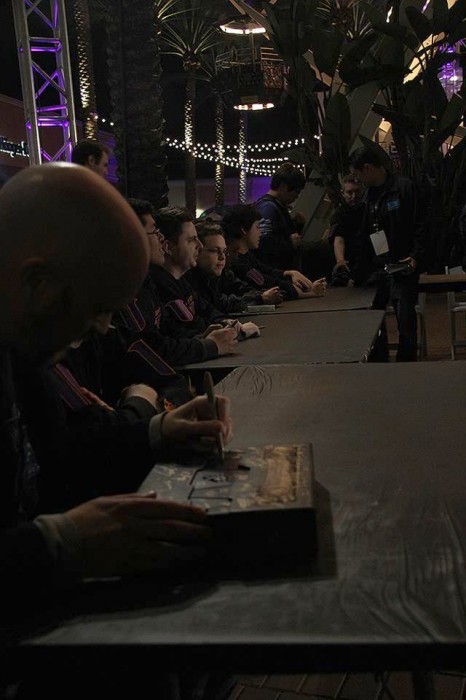 Another cool aspect of these kinds of live events is many times you get a chance to meet some of the major star pro players or even the game devs who will autograph your copy of the game.  The line to get collectors edition game copies signed was absolutely huge which shows that the time these devs and community icons take out of their lives to meet the community means a lot and is what makes this kind of event different than your normal “Line up and go” midnight launch. 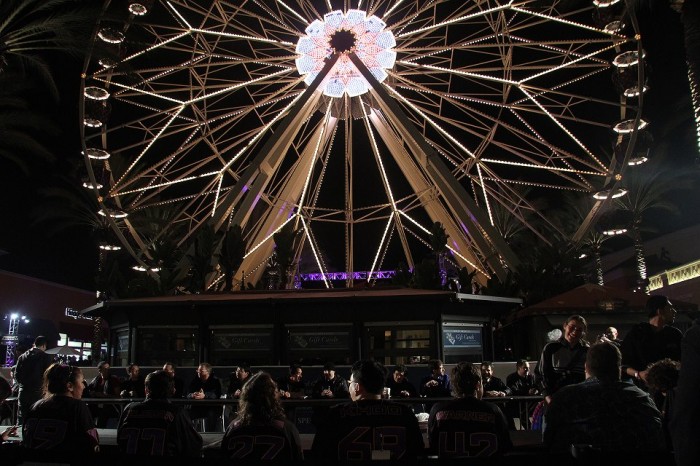 Here you can see a view from behind the signing tables before the crowd was allowed to file in for autographs from the people who make this all possible. 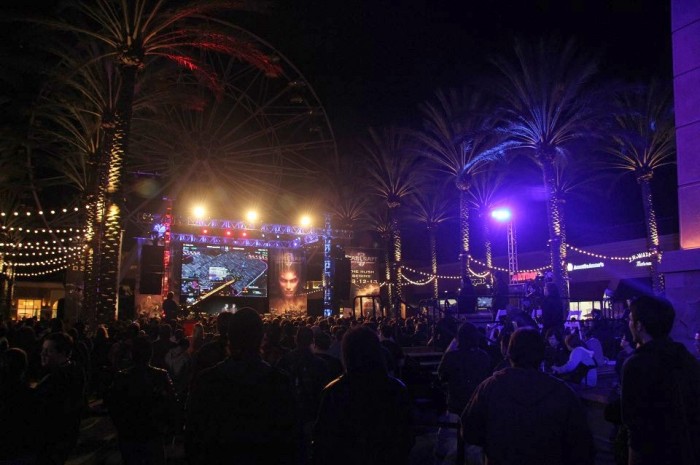 Here you can see yet another offering Blizzard had on hand was pro players fighting it out on the Heart of The Swarm battlefields in front of the huge crowd just to wet the appetite for the game which was mere hours away from launching. 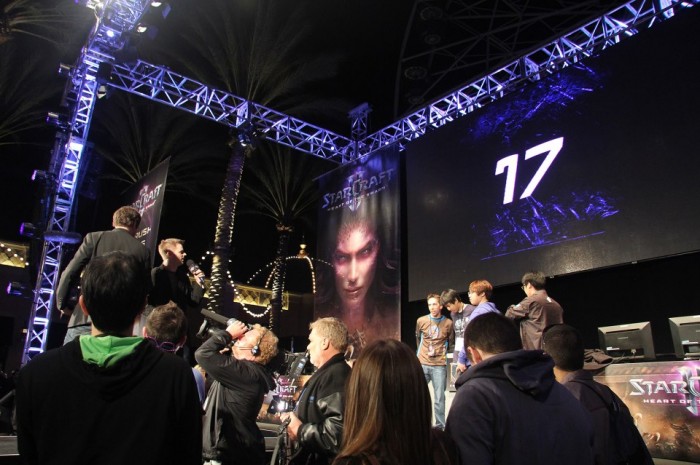 Here you can see the countdown as the whole attendance waited with now just mere minutes separating them from the game launch they had been waiting for with months of beta play and excitement. As you can see on stage there are many notables from pro players Polt, MC, Suppy and Vibe and personalities such as Day[9] and HuskyStarcraft casting the show matches and announcing during the event. 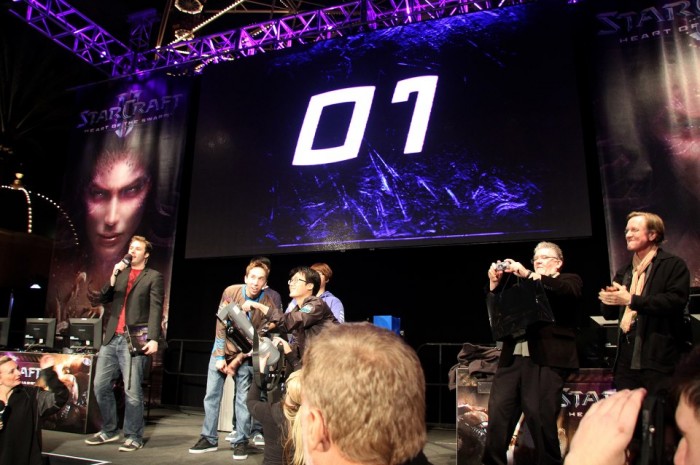 The tension grew exponentially as the clock winded down and the Blizzard crew brought out a large cannon looking object at the final moments. 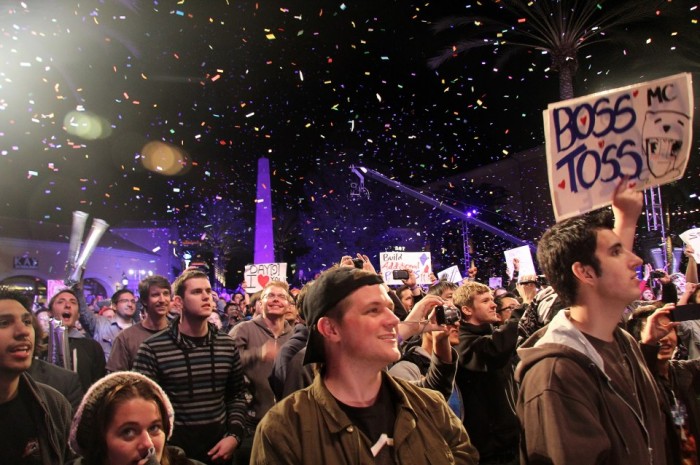 As the clock struck midnight an explosion of confetti filled the crowd in a burst of excitement comparable to new years eve in Times Square. Ok, maybe not that big but the energy in the air was really something to experience.

If you have never been to a Blizzard launch event try to get to one, or at least watch it online as even these pictures can barely scratch the surface of what it is like at the event.

This is not the end!

The experience does not end here as I had some seat time with the people behind the game and coming soon will be the Q&A Session about the new Heart of The Swarm title and also keep your eyes peeled as I now have the game and will be covering a brief overview on it coming soon!