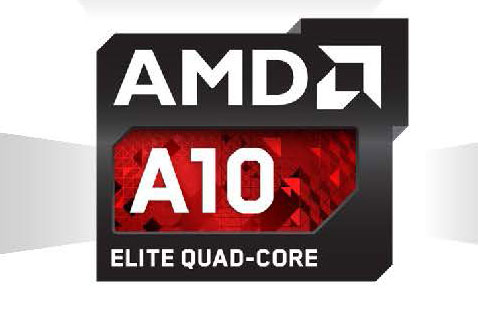 Today, AMD kicks off 2013 with the launch of Richland, the successor of the Trinity APU. The company launched four mobile APUs with 35W TDP designed for performance notebook. Architecturally, Richland is identical to Trinity as both APUs are based on the Piledriver CPU cores and Southern Island GPU cores. With Richland, AMD has bumped the clockspeed on the CPU and the GPU and improved upon the Turbo Core technology. In addition, AMD has worked with software vendors to provide facial recognition and gesture support that leverage on their GPU computing power.

AMD had a very tough time competing against Intel over the last few years. The Trinity APUs launched last year steered AMD in the right path where they delivered decent performance at relatively budget prices (check out our desktop Trinity and mobile Trinity APU reviews). The Trinity APU is where AMD is making the biggest improvement, delivering a good performance per watt ratio. Obviously the APUs are still lagging behind Intel in the CPU area but unless you are doing heavy workloads or doing benchmarks, it would be hard to tell them apart with common tasks for browsing web, typing word documents, watching movies, etc. The strength of the APU is on the GPU front where it is still faster than the Intel HD 4000 and clearly AMD wants to keep marching on with its strength. 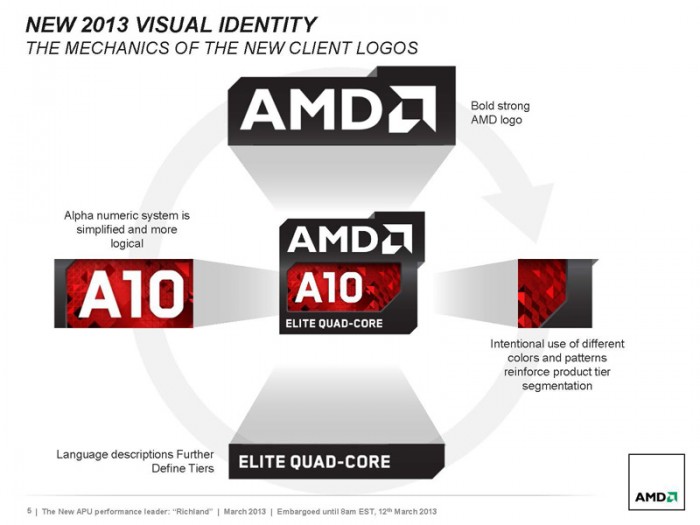 Much like how AMD is streamlining its product lineup, the company continuous to simplified the product logo. The new brand logo is more modern and forward looking. The “Vision” branding is gone for good. What we get now is a bold strong AMD logo, follow by a alpha numeric system identifying the product series, and then a language descriptions that defines the product tier. The new logo prominently displays the AMD company logo and the product series brand. The new 35 mobile APU will carry the “Elite Quad-Core” moniker underneath the product series.

Last year’s mobile APUs codenamed Trinity from AMD sports a Piledriver CPU architecture (an improved Bulldozer core) and the Northern Island GPU architecture. This year’s offering, Richland, has no new major architectural change compared to the Trinity except that Richland runs at a higher clockspeed and comes with minor tweaks. Richland now supports the DDR3-1866 (only the highest model will support this speed), up from the DDR3-1600.

Compare to the A10-4600M, (last year’s fastest 35W APU), this year’s champ the A10-5750M is clocked at 2.5GHz (Turbo to 3.5GHz), or 200MHz higher speed (300MHz Turbo). Since both are quad-core models based on the same architecture, we should expect the A10-5750M to offer a marginal increase in the performance. The GPU also gets 36MHz speed bump. Despite the new numbering of HD 8000, Richland still uses the same Northern Island architecture as the Trinity. It also has 386 Radeon core (same number as the last year’s model). So like the CPU, the performance gain from the GPU is not going to be earth-shattering either. 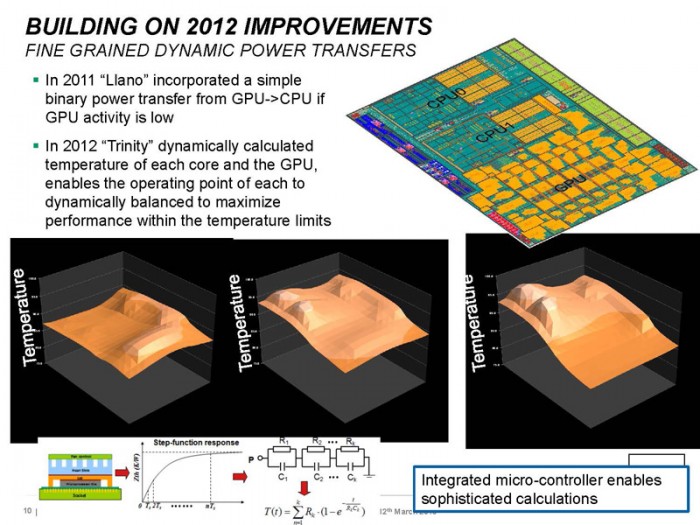 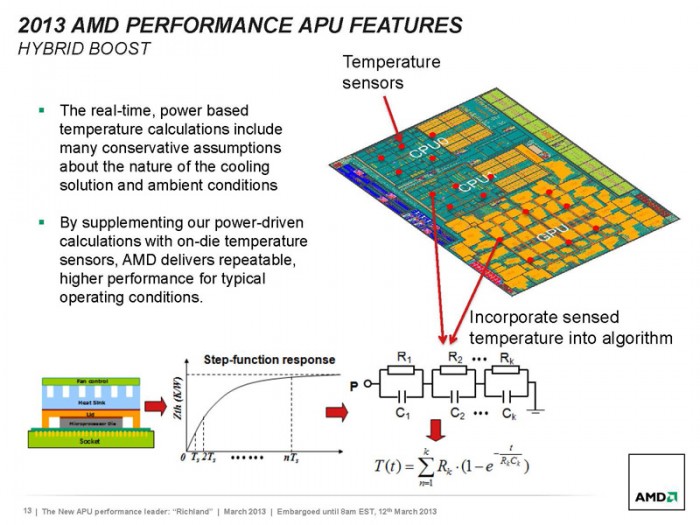 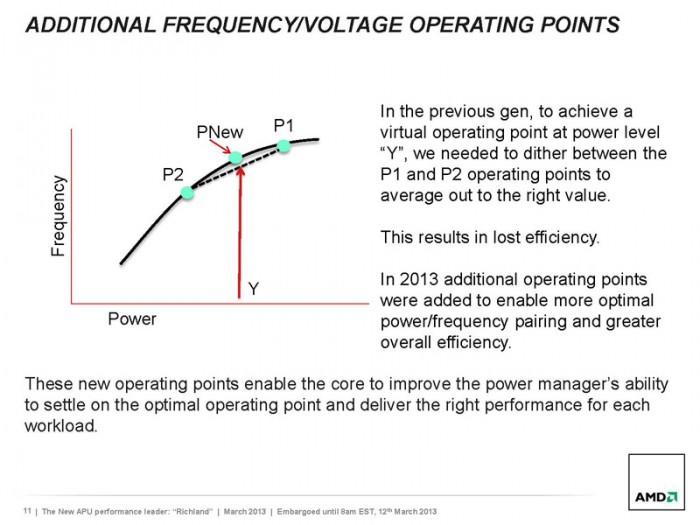 While there is no major architectural change on Richland, AMD has improved upon the the power management of the APU. Today’s CPUs/APUs feature an intricate power management algorithm that throttles the clockspeed for the CPU and GPU according to the type of workloads. Under light workloads that do not utilize all of the cores, there is thermal headroom to allow the APUs/CPUs to run at a higher clockspeed than its base clock. For AMD, this is called Turbo Core.

With Trinity, AMD’s implementation of the Turbo Core technology is based on the power consumption of the CPU or the GPU. Based on the workload, the chip will translate the power consumption into thermal temperature and if there is a thermal headroom available, the CPU or the GPU will get a speed bump. AMD has fine-tuned its algorithm with Richland by incorporating real-time, power based temperature calculation with the data coming off the various sensors placed inside the chip. AMD call this “Hybrid Boost”. By combining the power consumption and the on-die temperature sensor, AMD is able to further refine the frequency and power plot and add additional operational point that the chip is able to throttle. 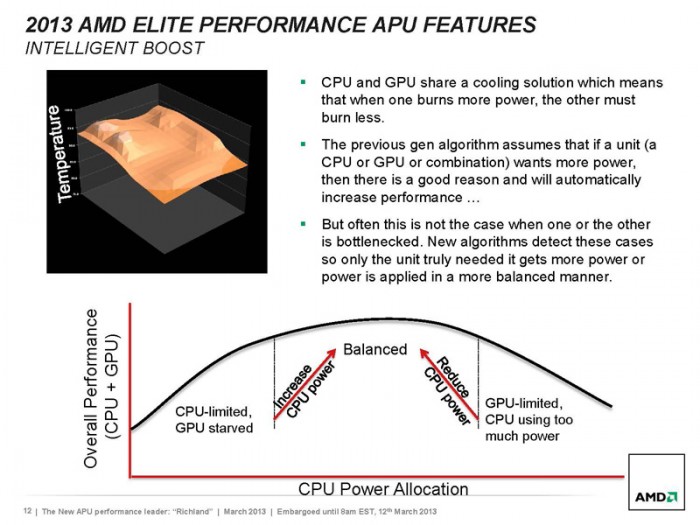 Again, throttling will work on both the CPU and the GPU. According to AMD, the new algorithm will deliver more balanced performance by detecting if a CPU or a GPU is bottlecking and shifting power appropriately to ensure the most optimal performance. 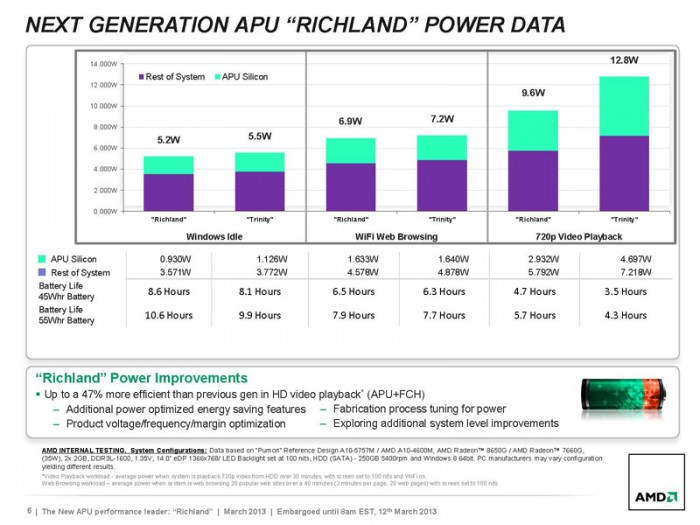 What this ultimately translates to the consumer is probably longer battery life, which is something that is much appreciated for mobile systems. With additional operation frequency and more tightly regulated throttling, the APU is able to reduce its overall power consumption. According to AMD’s own testing that compares the A10-4600M with the A10-5750M, the new APU is able to deliver somewhere from 5~25% lower power consumption. The video playback at 720p shows the biggest improvement in the power consumption. Here we can see that it is able to deliver one additional hour of movie playback. Obviously, this is not all due to the APU but also other system components as well. Nonetheless, it is good to see AMD is taking action in reducing the overall power consumption. 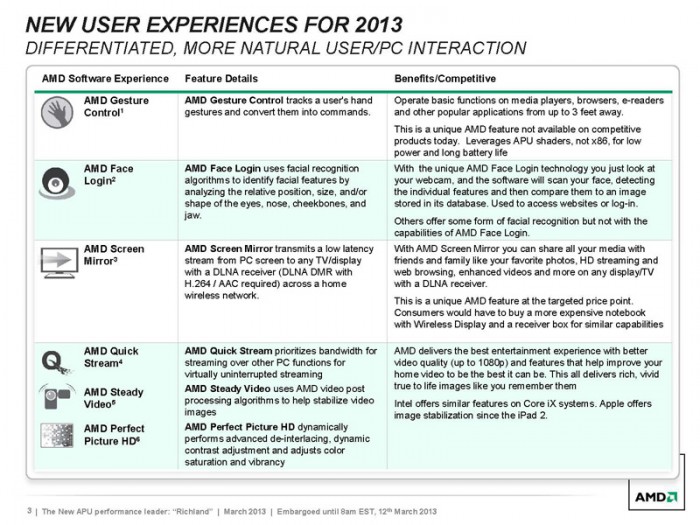 With Richland, AMD brings some new software experience that the company has worked with independent software vendors (ISVs). Among the new features is the AMD Gesture Control, AMD Face Login, and AMD Screen Mirror. The Gesture Control is pretty self-explanatory where with a simple webcam, you can use gestures to do some simple tasks such as controlling a media player, browser, and other applications up to three feet away. The Face Login uses a webcam and a facial recognition algorithm to detect facial features. The AMD Screen Mirror is based on the MiraCast technology, a open standard created by WiFi Alliance, that allows the sharing of multimedia wirelessly across various devices. 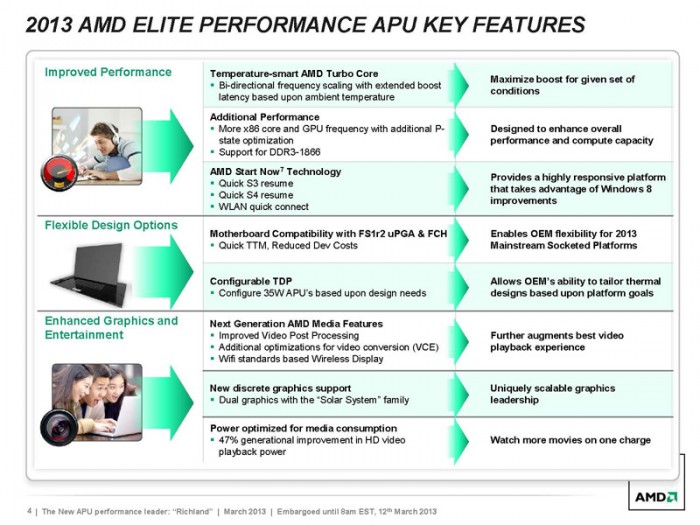 As an industry, PCs are moving toward providing a faster response system that aims to give us the instant-on experience that we have used to from our Smartphones and Tablets. Starting with the Richland, AMD is finally bringing this technology to our PC/Notebooks. The Start Now Technology provides faster resume time from S3 and S4 and quicker connect to the WLAN. According to AMD,  the Start Now does not require an SSD but we expect that it work better with an SSD. We will have to wait until we get a chance to test this out. 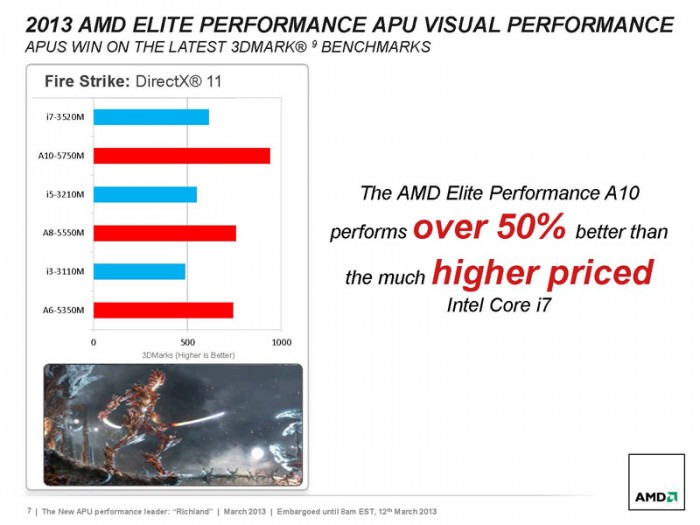 Obviously, AMD continues to have a lead over Intel when comes to gaming. AMD shared the result of the latest 3DMark Fire Strike benchmark. Of course, AMD would also like to point out that their APU can work in tandem with a Radeon HD graphics for dual-GPU setup that gives additional performance. Richland will work with the upcoming “Solar System” family. However, at the moment the information on the GPU is still not available so we do not know exactly which GPU it will work with the integrated graphics.

Today’s launch officially kicks off AMD’s product release for 2013. AMD has informed us that in the next few month, before the first half of 2013, it will launch other APUs with 17W TDP for Ultrathin notebooks. In addition, we expect to also see the desktop variant to be on the market pretty soon as well. Furthermore, the successors to Bobcat (Kabini and Temash) are also expected to be launched, but no time-frame was provided.

Last but not least, during our meeting with AMD, we also got reassurance from AMD that the company is still on track to deliver Kaveri in 2013 (again no specific time was given). Kaveri is the successor to the Trinity, featuring Streamroller CPU cores and the GCN architecture (the same one that is found on the HD 7000) for the GPU. Kaveri is going to be very interesting since it is supposed to deliver some exciting performance on both CPU and GPU front over the current Trinity/Richland offering.