The ASUS MATRIX HD 7970 Platinum is a strong and able card as we see by simply looking at the sum of its parts. But parts only mean so much as the ability to make the card run needs to be in place as well and ASUS does that quite well at the same time.

Starting up the GPU Tweak application we went through the settings and enabled all of the voltage and tweaking options. We were amazed to see two full pages of sliders available to tune everything down to even LLC. This is a level of control we have never seen before, and it is nice to see it. This kind of innovation is what pushes for even better future tuning products from overclocking-friendly companies like ASUS.

Clocking the memory we got to near 1300 MHz, but we experienced very minor artifacts so we tweaked and tuned it to 1275 MHz, which was completely stable for the GPU end. This was a fairly quick overclock, and we cannot see any reason others could not reach it also. 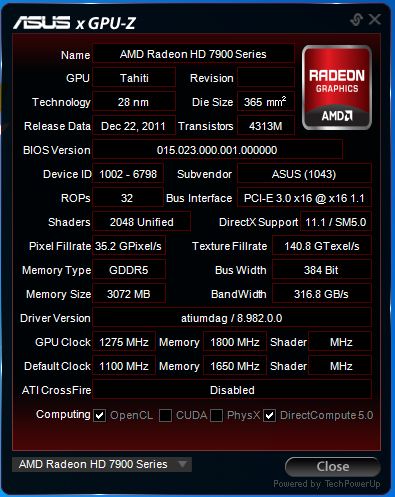 Memory overclocking was very good, netting a 7200MHz QDR stable clock, which is just under a 10% overclock, and while that may not seem like much it really is pretty good considering how high this card is clocked out of the box.

The MATRIX DCII cooler as we have seen before has proven very effective and the heat dump even when overclocked is easily managed with maybe a mild purr from the DCII’s fans. 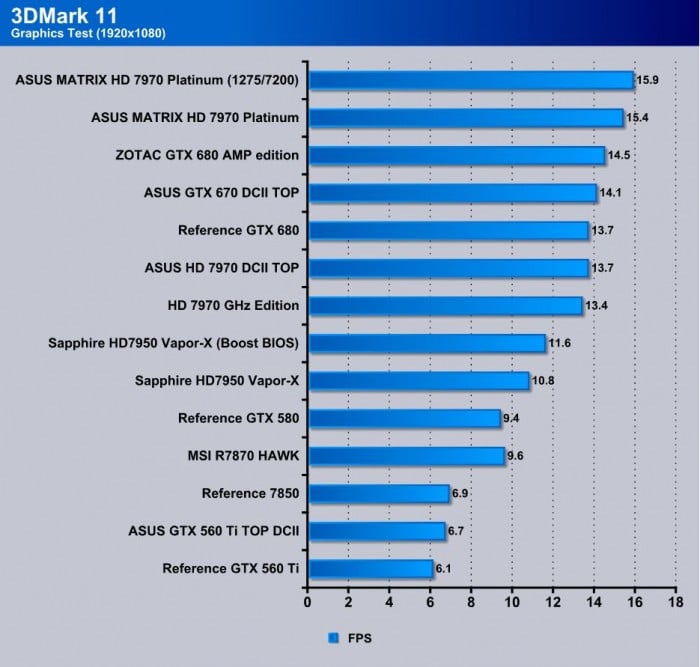 3DMark 11 shows a nice picture of where each card falls in line according by our testbench. The HD 7970 MATRIX blew away even the overclocked variants of the GTX680. When you consider the superb overclock, this lead extends even further. 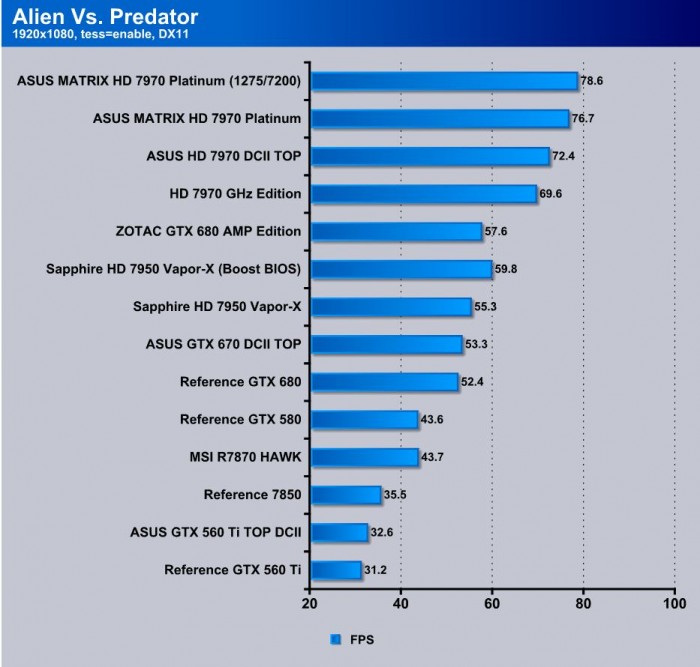 AvP looks like a very AMD friendly game as we see that both the HD 7970 DCII and the MATRIX HD 7970 Platinum top the charts with some very capable FPS results. 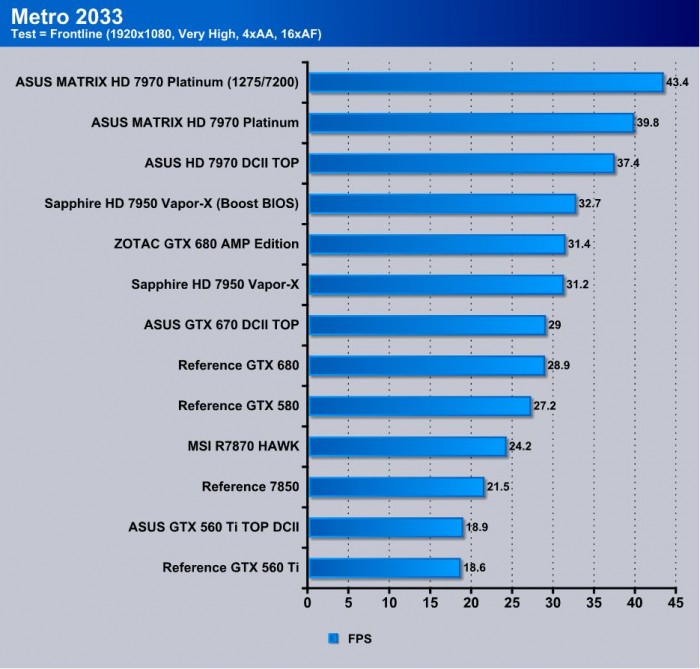 Metro 2033 has always been extraordinarily stressful for GPU’s, and this has not changed with time. Once again this game is definitely a little friendlier with AMD cards and the MATRIX actually puts us in some playable framerates, especially with the overclock which is nice since for the longest time it took dual card setups just to get somewhat playable framerates from this game. 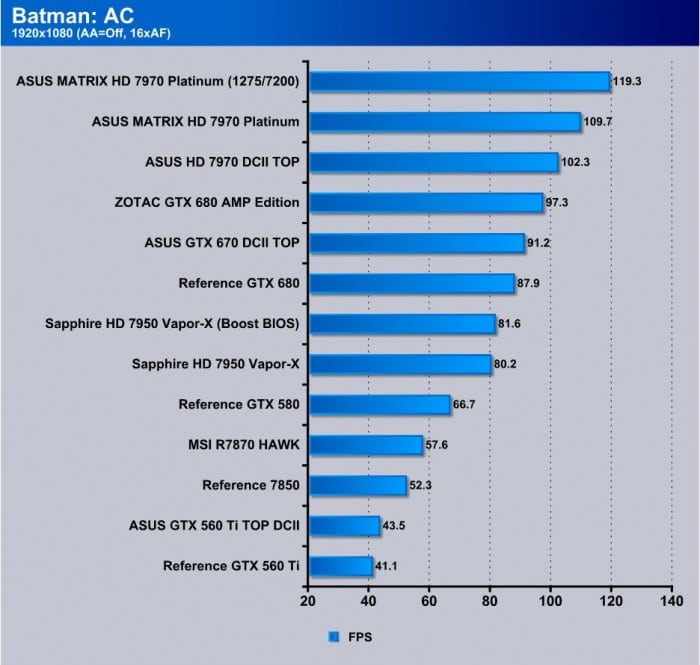 We tested Batman Arkham City and once again the MATRIX sweeps the field, especially once the overclock score comes in. We can only imagine how much more power the card has waiting in the reserve for some extreme cooling action. 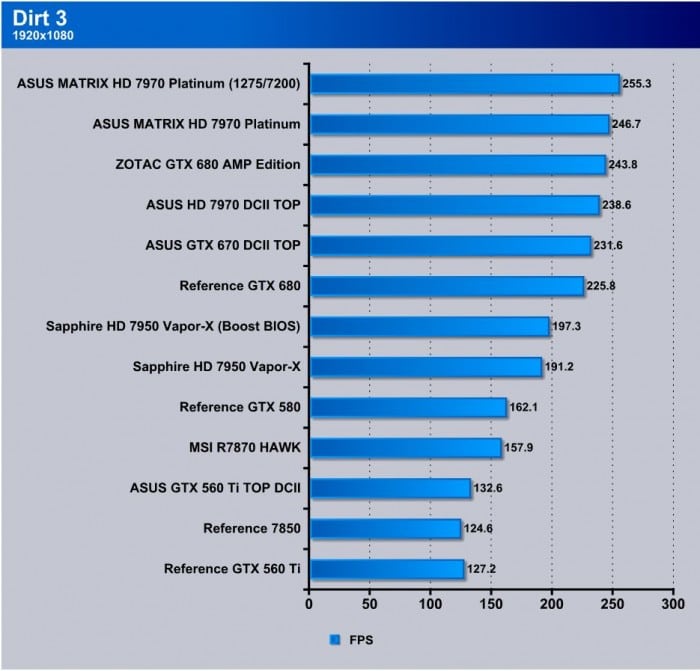 Dirt 3 surprised us, as the game is heavily marketed by AMD. Here though, the HD 7970 MATRIX barely comes out above the GTX 680. We figured it would have demolished it here. Once you tack on the overclock though, it pulls a very nice lead.