The A10-4600M definitely delivers a very competitive CPU performance for a mobile chip. For the most part, the APU is almost as fast as the Core i3 2100 on the CPU front but it excels in the GPU front.

While AIDA64 is a pure synthetic benchmark that measures the processor’s raw performance. The result from AIDA64 may not always represent real world performance but we include it here to give you an overview of the performance of the the A10-4600 inside the MC101. Consider the fact that A10-4600M is 17W TDP, the performance is rather impressive, and it is able to keep up with the higher TDP CPUs like the A8-3850 (100W) and the Phenom II X4 910e (65W). The Core i3 2100 still comes ahead of the A10-4600M but keep in mind that the Intel’s offering is also 65W. One area where the A10-4600M shows impressive result is the AES benchmark thanks to the hardware-assisted encryption unit support which the older Phenom based CPUs and the Core i3 do not support. While it is unlikely that anyone would need to encrypt their HTPC system, we are glad to see that finally AMD is able to add such support on their mobile CPUs.

The memory performance has been improved slightly, especially in the Write and Copy. 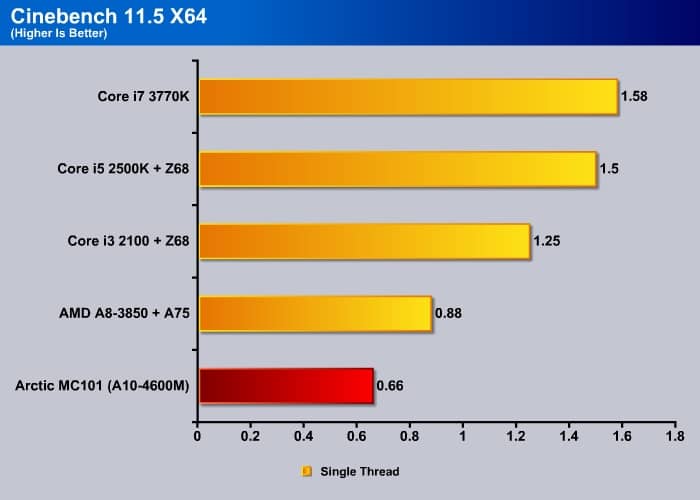 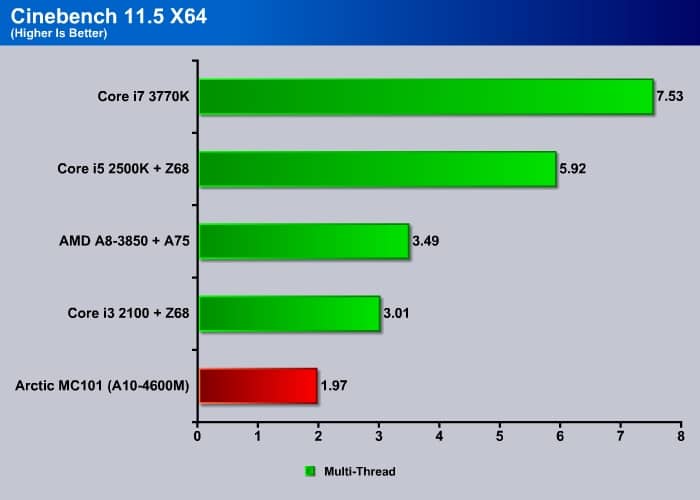 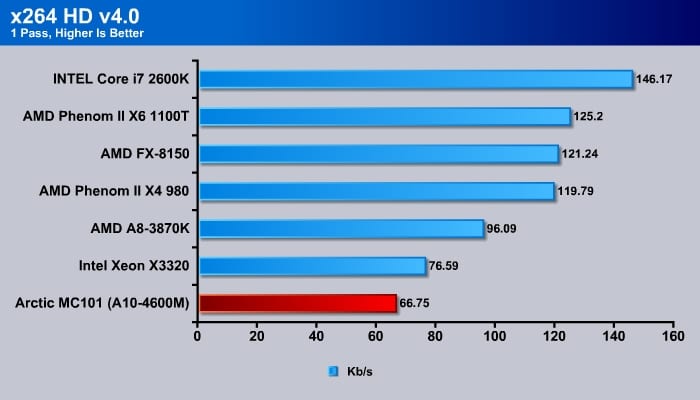 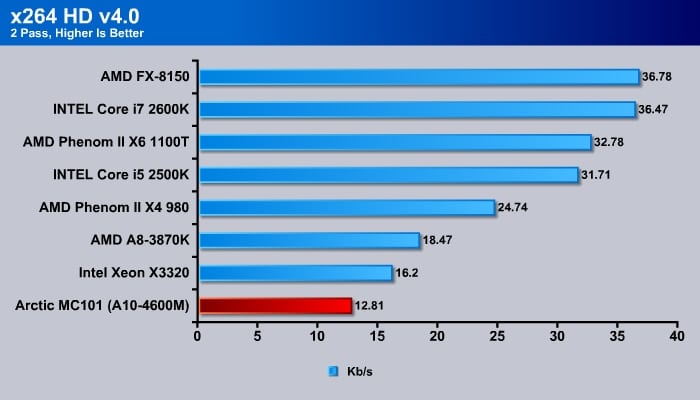 When comes to x24 transcoding, the A10-4600M is almost as fast as the Intel Core 2 Quad, not too bad for such low power CPU.

A note with the PCMark Vantage, the desktop CPUs are tested with AMD HD 6850 GPU so do not pay much attention to the gaming result. 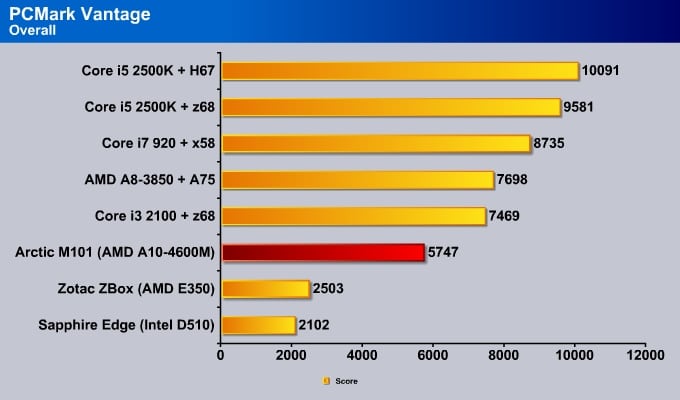 PCMark Vantage has the Arctic M101 scored 5747, more than double of what the Zotac ZBox or the Sapphire Edge. Not too shabby.

Looking at the individual tests, we can see that the Arctic M101 is definitely fast enough to keep up with some of the desktop CPUs. We can see that the system even edges out the A8-3850 in couple of tests (Music and Communication). The Core i3 2100 is about 30~50% faster than the A10-4600M. Again, bare in mind that we are making the comparison between a desktop CPU with a laptop CPU and a 65W vs 35W TDP. Taking it into consideration, the performance of the MC101 is certainly quite respectable.

We decided to test the PCMark 7 with with all CPU running on the integrated GPU. Since many people who are looking for an HTPC may opt to use the built-in GPU as oppose to a discrete GPU. 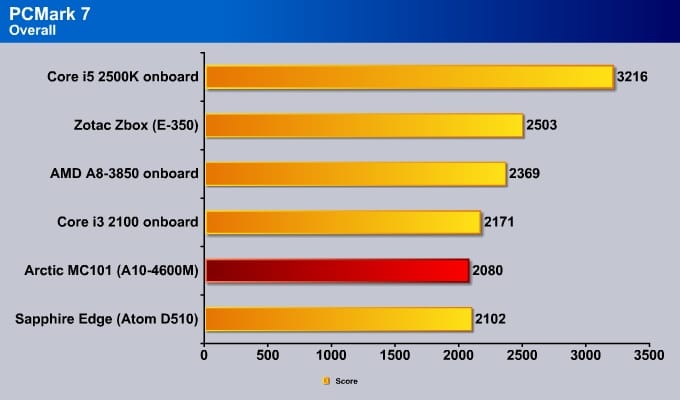 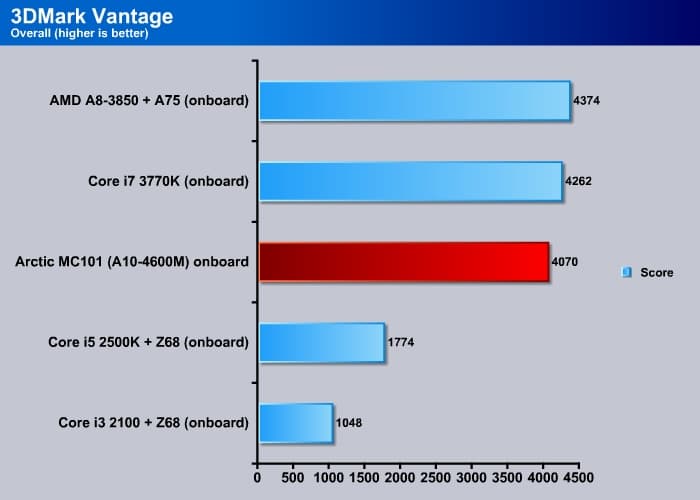 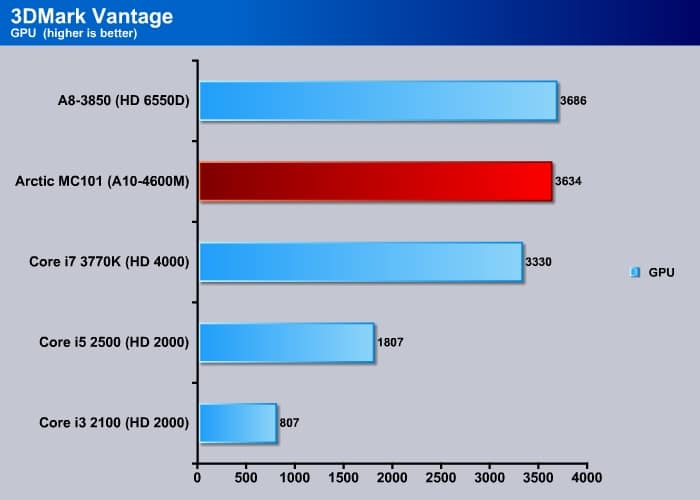 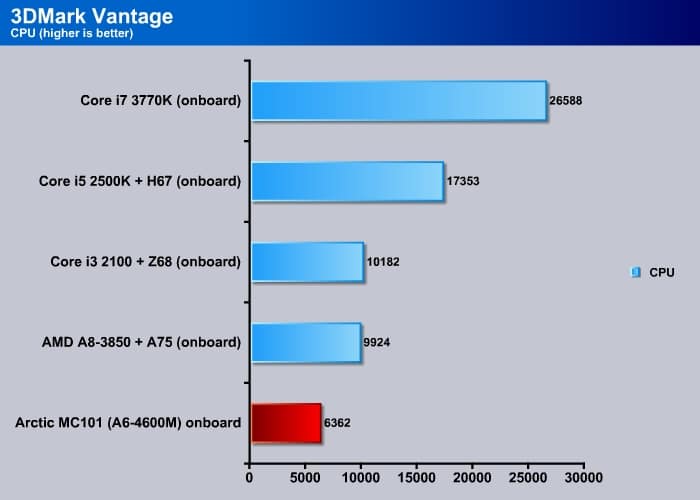 HTPCs often are not designed to play games at the highest setting but people may simply like to sit on their couch and enjoy a few hours of enemy killing and saving the world. No doubt here is where building an HTPC with the A10-4600M  shines. The HD 7660D inside the A10-4600M is actually faster than the integrated HD 4000 in Ivy Bridge and about as fast as the HD 6550D in the A8-3850. Thus, the integrated GPU on the A10-4600M should be able to deliver a playable framerate at resolution up 1400 x 900 at medium or low setting. It’s not the most optimal setting, but you can enjoy a light gaming on the system without any issue. 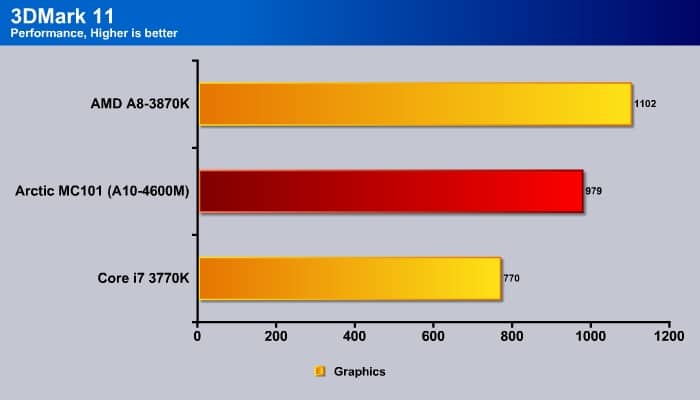 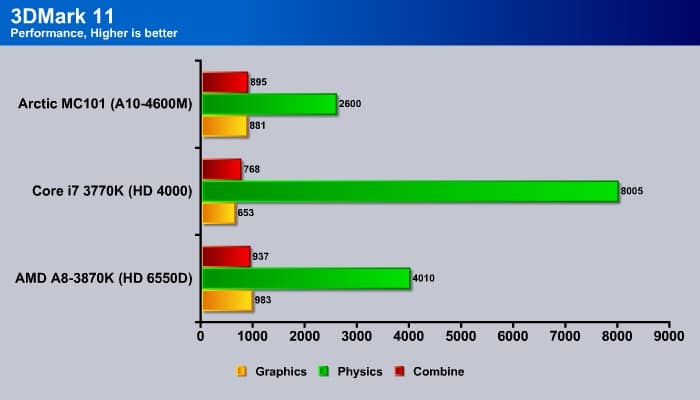 We see the same result with the 3DMark 11 where we can see the GPU on the A10-4600M is about 27% faster than the Ivy Bridge and is very close to the last year’s Llano’s offering. This is not bad for a mobile CPU to offer the GPU performance equivalent to a desktop CPU.

When we first read the AMD A10-4600M APU, we had high hopes for AMD because for the first time we had a mobile chip that offered a good combination of CPU and GPU performnace. Budget laptops often come with only discrete GPU and as we can see the Trinity GPU delivers a good performance that is comparable to what the AMD Llano platform (desktop APU from last year) offers. While the CPU front on the Trinity is still lagging behind Intel, it is fast enough for all of the daily tasks that we do like checking email, browsing web, and watching movies/YouTube, etc. Thus, Trinity is definitely moving AMD in the right direction.

As for the Arctic MC101, this is the first time that we have come across a small system that we do not mind using as a media center system or as an office PC. Aesthetically, the Arctic MC101 looks simple while not being overly plain. It’s brushed aluminum should fit nicely with any home entertainment. We can tell that Arctic has put in great deal of thoughts when designing the MC101 as the unit comes with a good mix of ports and the included card reader and TV tuner certainly adds its appeal. We like the fact that there are also spaces inside the unit to add one additional hard drive. We also like that the system has support for mSATA, making it possible to add an SSD or additional storage. Moreover, the fact that upgrading these components won’t void your warranty certain will not hurt.

The Arctic MC101 strikes a balance of performance and compactness. The system is a powerful machine thanks to the A10-4600M APU and the generous 8GB RAM. Opening up multiple applications does not slow down our system like we experienced with the Intel Atom or the AMD Brazos. While the unit is designed mainly for HD content playback, the integrated HD 7660G GPU is actually fast enough to play games at 1360×768 resolution. The only major complaint we have with the MC101 would be its high operating surface temperature. Additionally, we would like to see future units come with a Bluray built-in or even a remote control.

All together, at $749, the Arctic MC101 certainly delivers plenty of power for HTPC at size smaller than some external enclosures. If you are looking for a small system, the MC101 is definitely worth considering