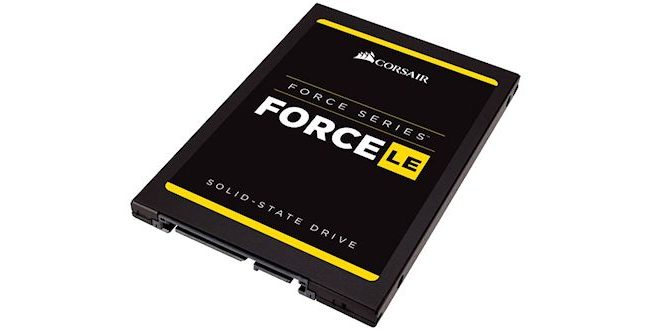 Benchmarks are just that a physical measurement of speeds and often you can look at the numbers and go “Wow fast!” without going into detail on what that means so we decided to include a beyond the benchmarks section for the Corsair Force LE 480GB TLC SSD.

After installing the SSD boot times went from in excess of 60 seconds to 21 seconds flat. That’s almost triple the boot time with the platter drive as opposed to the SSD. We also noticed that programs were quicker to load (by far) and games didn’t lag and drag at all where the platter drive would, at times, cause slowdowns.

In general, the Corsair Force LE made the 5820K.Asus Maximus VIII combination supercharged and much faster and more responsive.

We took a Dell Laptop with a 4th Generation Intel Core I3 and a 7200RPM  (WD5000LPVX-75V0TT0), Western Digital 500GB SATA 2.5 Hard Drive that runs in the 115MB/s range and replaced it with the Corsair Force LE 480GB SSD. Now the Western Digital 7200 RPM drive is no slacker and when we cloned the drive and popped in the Force LE SSD the difference was night and day. Immediately boot times went to blink and miss it speeds. Programs and yes games loaded at the blink of an eye and most of the online gaming “lag” problems we had experienced simply disappeared.

What had been a laptop we were considering replacing was completely rejuvenated and was actually faster than it was out of the box. The laptop was somewhat of an evolution going from a 320GB 5200 RPM drive to a WD 7200 RPM modern drive, then a 500MB/s SSD and we can honestly tell you with Windows 10 we had issues with both platter drives. We would hit spots where the Task Manager was hitting 100% disk usage (a common Win 10 error) so we disabled Superfetch, Indexing and all the usual suspects for testing. After installing the SSD the laptop sprang to life and performed like never before.

So as you see benchmarks are fine and a good measure of performance but they don’t tell the entire story. We would heartily recommend the Corsair Force LE 480GB SSD for shoring up laptops that seem to be running too slow. (We, of course, uninstalled all the Dell bloatware on the laptop prior to testing).