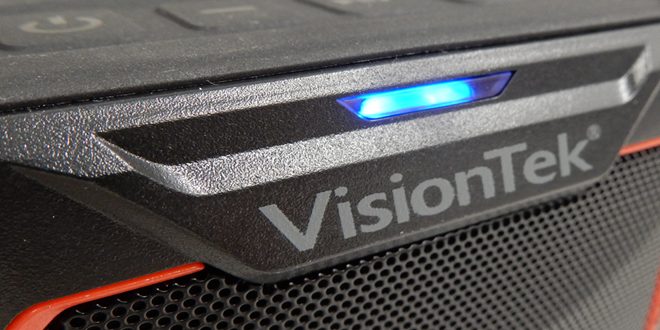 VisionTek is most widely known for their graphics cards and SSDs, but they also offer a wide range of technology accessories for everyday use. Today we are looking at the VisionTek BTi65 wireless speaker, a compact and portable device that is designed for use in an active lifestyle. The BTi65 features an IP65 rating, meaning that it is fully dustproof (6), and can withstand water up to the force from a 6.3mm waterjet (5). In addition to the IP65 rating, the device is also shockproof, allowing it to take a tumble and continue on working. Bluetooth 4.1 compatibility, along with 3.5mm connectivity allow for a variety of connection options. A 2000mAh battery that touts eight to 10 hours of playback provides plenty of juice for a trip to the beach or pool. 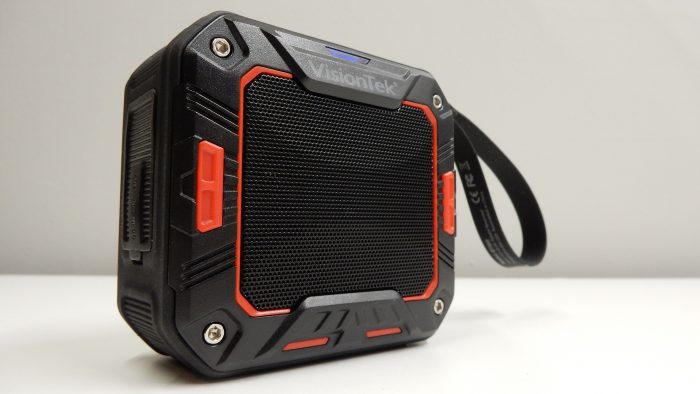 While there isn’t too much complexity to the BTi65 wireless speaker, there are a few features that we think deserve a little extra attention.

IP65 Rating – The Ingress Protection (IP) rating specifies a device’s resistance to solid particles (the first number in the rating), as well as liquid ingress protection (the second number in the rating). In the case of the BTi65, it comes with an IP65 rating, meaning that it is completely dustproof (6), and can withstand water up to the force from a 6.3mm waterjet (5). Plenty of protection for taking the BTi65 on a camping trip, or to the beach or pool.

Bluetooth Wireless – With a connection range of up to 30ft, the BTi65’s Bluetooth connectivity allows for a hands-free experience for phone calls thanks to the integrated microphone. Keeping your phone or audio device in your pocket while the BTi65 stays in place lets you adjust a playlist or track selection on the fly without having to interact with the speaker.

The VisionTek BTi65 wireless speaker comes packed in a small retail box with a front window that gives a good look at the unit inside. The box features a design that suggests for its use at the beach, with the device looking like it is sitting in the sand, with the ocean behind it. The back of the packaging is pretty sparse on information, and just highlights a few of the BTi65’s features and compatibility options. Besides the speaker itself, VisionTek also includes a 3.5mm audio cable for non-Bluetooth devices, as well as a Micro USB cable for charging the internal 2000 mAh battery. A basic user manual and a Thank You card are also included in the box. 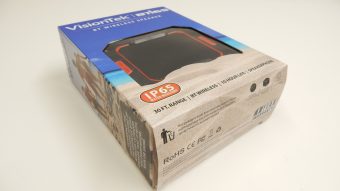 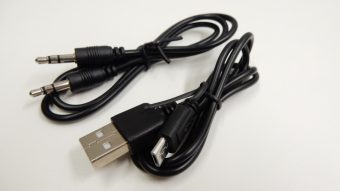 Once out of the packaging the BTi65 appears as a squat and stocky cube of a device with a mostly black build with red highlights. The body of the BTi65 is hard, molded plastic with a rubber strip running around the exterior edges to help take the shock out of drops and bumps. VisionTek’s color choices of black and red are a bit “aggressive” in our opinion, and don’t really seem to fall in line with the use case scenarios of a wireless speaker. While black and red is a common theme for gaming PCs and peripherals, this aggressive combination of colors may cause some potential buyers to back away from the BTi65 and opt for a more neutral or “quiet” color scheme.

The front and back of the BTi65 are nearly identical, save for the front having a VisionTek banner and small LED indicator at the top of the speaker. While the backside does also have a speaker grille, there is only a single speaker in the BTi65, and it resides on the front of the unit. Absent from the front and back however, are any rubber pads or bumpers to protect the speaker. Sitting the unit flat on a rough surface is sure to put scratches or grooves in the plastic over time. This seems like a real miss for a device that touts itself as being somewhat rugged. 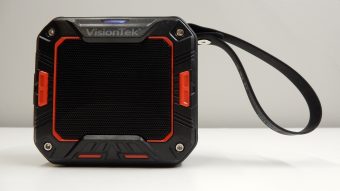 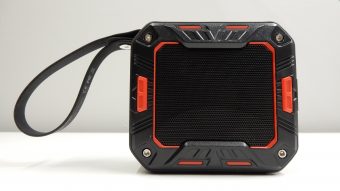 The top of the BTi65 is home to four buttons that from left to right control Power, Volume Down, Play/Pause/Call, and Volume up. These buttons are integrated into the rubber edge surrounding the BTi65, and are therefore not a spot where water or debris could potentially get into the speaker. 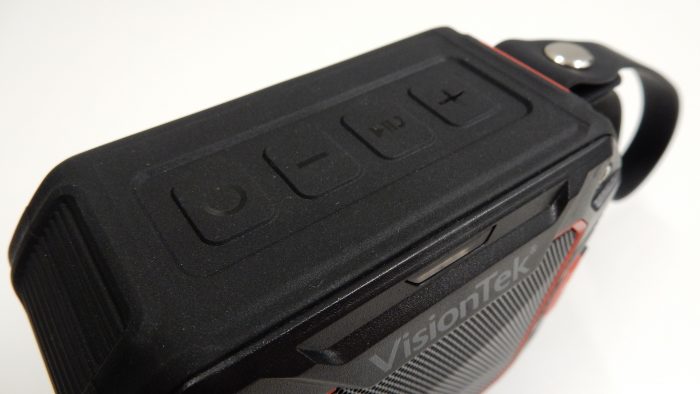 The left side of the speaker features a rubber door that covers and protects the 3.5mm audio jack and Micro USB charging port. The rubber door is held on by a rubber tab so that it is not lost when these internal ports are being utilized. Good thinking on VisionTek’s part. 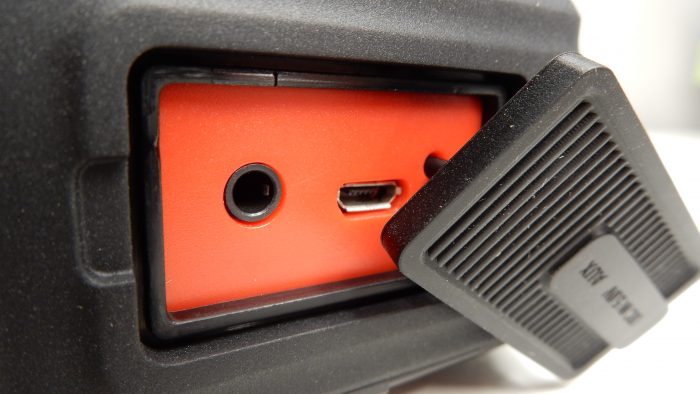 The right side is free from any special features, other than the continuation of the rubber surround and a textured grip surface. The top right of the speaker is home to a rubber carrying loop, making the BTi65 easily portable. Simply slide it over your wrist, grab the loop, or even attach it to a backpack for tunes on the go. 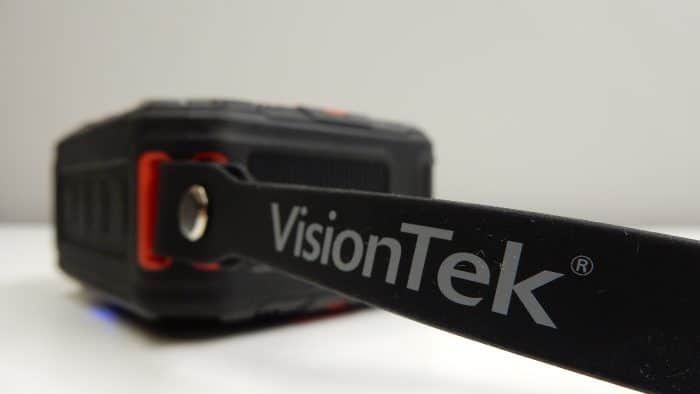 On the bottom of the BTi65 is the same rubber treatment, but in the center is a standard 1/4 inch 20 thread for mounting the speaker to a tripod or similar device. While the sound output from the BTi65 is quite good, we aren’t sure that putting it up on a tripod is really something that many users will take advantage of. 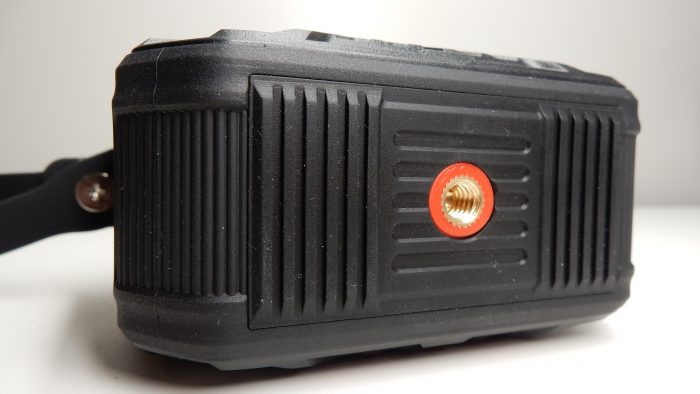 We don’t profess to be master audiophiles here at Bjorn3D, but we do have some standards that we like to hold our audio devices to. Since the VisionTek BTi65 is aimed at sound on the go, most of our testing was done around the house while performing housework, or out on the deck relaxing on the weekend. We did however use the speaker to make a few work-related phone calls to see how it performs when the music stops and you need to get down to business. Our device of choice when testing the BTi65 was a Motorola Droid Turbo (2014), using various applications like Google Play and BeyondPod for music and podcasts, respectively. Connectivity was tested via both Bluetooth and the 3.5mm audio jack using the supplied audio cable.

Powering on the BTi65 is achieved by simply holding down the power button for a few seconds. A simple power on sound will come from the BTi65, and the LED will quickly flash blue. After pairing the BTi65 with your device, the LED will steadily glow blue. When using the line-in connection, the LED turns green. During charging operations via the Micro USB port, the LED will glow red, turning to green when charging is complete. Speaking of charging, we were able to get about nine hours of playback out of the BTi65. The amount of playback time experienced depends on how loud the volume is set, so some variance in battery life is to be expected.

Our playlist features a variety of styles of music from hip-hop tracks to 60’s and 70’s classic rock. Artists from Daft Punk to Creedence Clearwater Revival to Stone Temple Pilots make an appearance on our testing playlist.

We have to be very up front when it comes to music playback on the BTi65. As far as audio quality goes, there isn’t much the BTi65 can do to produce great music playback, mostly due to its single 50mm driver. High notes in our music selections were a bit tinny, and lower frequencies lacked punch. That being said, the BTi65 can get very loud while still sounding quite clear. Only at the highest levels did we notice the driver being pushed too hard on low notes, producing that familiar sound of stock speakers in the a teenager’s car pushing to the limits of their voice coils and surrounds. For moderate volume levels that we would use around the house or out in a public setting, the BTi65 was more than adequate at getting the job done.

While paired up to our mobile phone, we utilized the VisionTek BTi65 multiple times to place and receive phone calls. Sound clarity from the speaker was more than sufficient to understand the other party, but we had multiple calls where the person on the other end complained of low quality sound or low volume. While this might be okay for a call here and there, we would suggest utilizing the phone itself to carry on any important calls where details might matter.

Working in the Elements

Coming with an IP65 rating, the VisionTek BTi65 claims to be both dustproof and mostly water resistant. We can attest to these claims, as our review sample endured the wrath of a 3 year old’s sandbox and kept on pumping out the tunes. Being dropped into the sand and tossed out of the sandbox and onto the stone patio had not effect on the BTi65, save for a few scuffs and scratches on the hard plastic body. This is where we would have loved to see more rubber protection on the front and back surfaces of the speaker.

With dust and small particles accounted for, we tested the BTi65’s water resistance by listening to podcasts and installing a storm door. During our installation on a cool fall morning, a thunderstorm rolled in and proceeded to soak the BTi65 that was sitting on the deck. With the rain coming down at an angle, and the wind whipping it around a bit, the BTi65 showed no signs of damage or impairment due to water. The rubber seal that covers the 3.5mm and Micro USB ports did a fine job at keeping any moisture out of the unit itself. No longer will we have to worry about getting our mobile phones wet at the pool in the summer, as the BTi65 will provide quick access to volume and basic controls, right from the side of the pool. 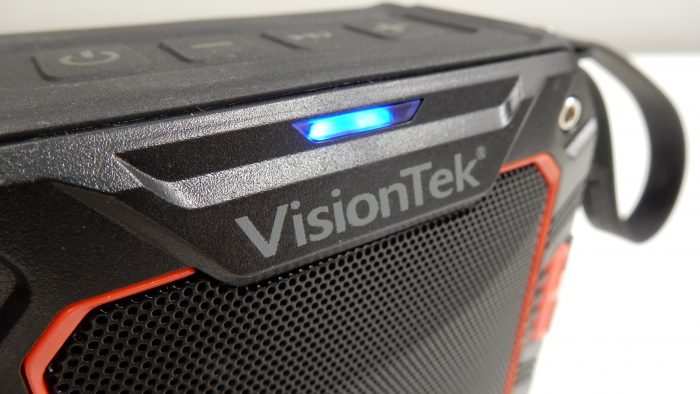 VisionTek really impressed us with the BTi65 wireless speaker. While the aesthetics of the device may not be for everyone, the IP65 rating may sway some users who are looking for a durable wireless speaker that can withstand regular use outdoors. Being able to take the BTi65 with your for a day at the beach or on a canoe trip without having to worry about sand or water damage can help you relax, knowing the device is safe.

Don’t expect to get concert hall sounds from this portable Bluetooth speaker, but what you can expect is lots of volume with quite good clarity. The only real complaint we have with the operations of the VisionTek BTi65 is the quality of the built-in microphone. When testing the BTi65 with phone calls, nearly every person on the other end complained about our voice quality.

While the summer months may be gone, we expect to get plenty of use out of the BTi65 this fall and winter when sitting around a fire pit. But we can’t lie, we are super excited to take the VisionTek BTi65 wireless speaker to the pool to enhance our summer play and relaxation. Either way, the internal, rechargeable battery will be more than enough to power the BTi65 for about eight to 10 hours.

With an MSRP of just $30, the BTi65 is a great value. Bluetooth audio? Check. Rechargeable battery? Check. Resistant to the elements? Check. Add it up and the VisionTek BTi65 earns the Bjorn3D Best Bang for the Buck Award.