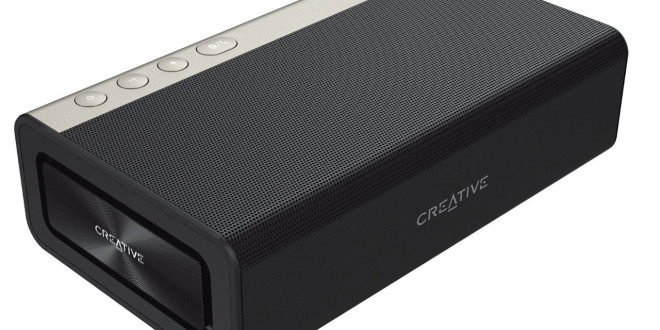 Sound Blaster and its parent company Creative have a long-standing tradition of audio excellence going back to its creation. Since then the company has grown explosively and has significantly expanded their product line since its humble beginnings. Today’s Sound Blaster offering brings us to the new and improved ROAR 2. This portable Bluetooth speaker leaves all other compact Bluetooth speakers in its dust. 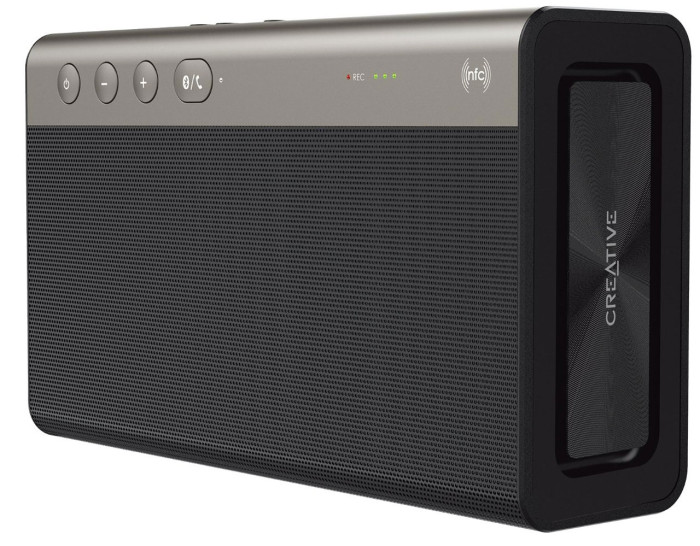 The ROAR 2 is a compact portable speaker that is Bluetooth/NFC capable and has a built-in battery to keep the device powered on the go and is also capable of charging your mobile device. By using a 5 driver system, Sound Blaster was able to cover a large frequency range to ensure a rich listening experience for the user.

Sound Blaster went with a pure white packaging with black lettering and full color pictures of the product, not that this matters considering Sound Blaster chose to use a pretty universal color scheme for the Roar 2. 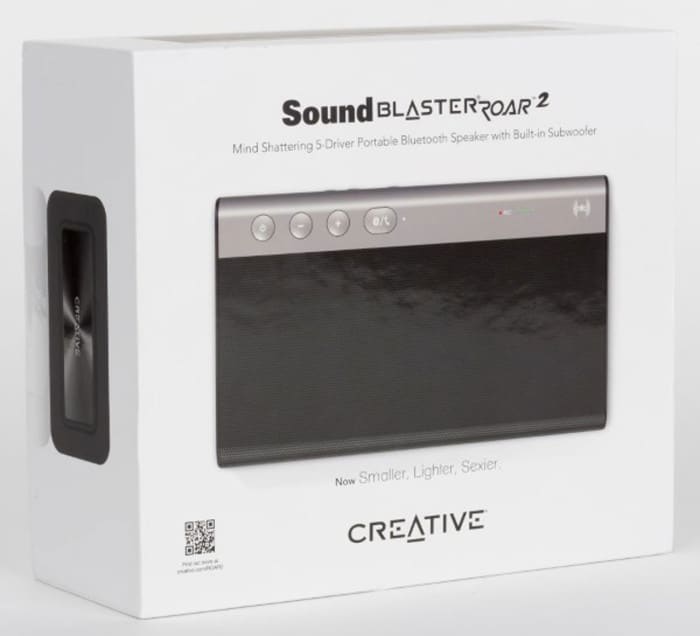 As far as the actual appearance of the Roar 2, we found it to be simple, elegant and beautifully laid out and easy to use with excellent form and function.   The top of the Roar 2 features 4 large domed buttons that after becoming familiar with the Roar 2, a person could operate the speaker in the dark. Also located next to the buttons is a single green Power LED and 3 more green battery status LEDs and a microphone. Below this user interface is the fine mesh covering that covers 3 of the audio drivers. 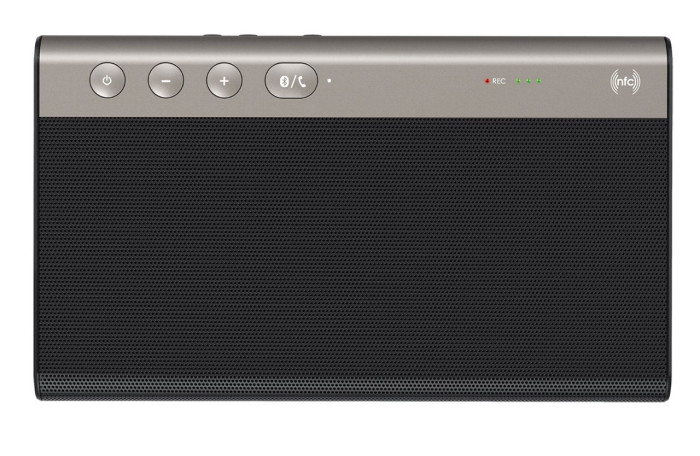 Here is a cutaway of the Roar 2 so you can see the inner workings that give it the great audio quality that we experienced during our testing. 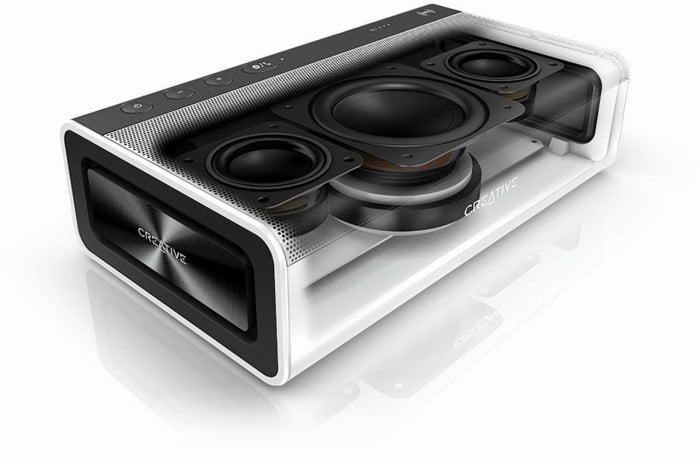 The bottom includes the serial number sticker, compliance information and last but crucial are the 2 rubber strips that extend the length of the system to ensure it remains planted and grips any surface you put it on. 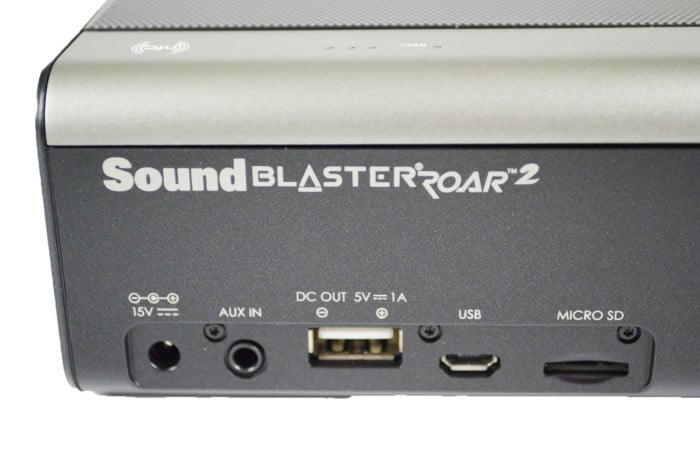 On the rear of the Roar 2, we find more inputs and media controls. The inputs featured on the Roar 2 are a 15V power, AUX in, USB out for charging your devices, Micro USB and a MicroSD card slot. The controls that are built into the back side are a switch for USB Audio or Mass Storage, Roar Tera bass, play/pause feature, change tracks and a switch to change from shuffle or repeat . The next sets of controls are specific to the microphone that is built in that allows users to use the Roar 2 to take a phone call or record. Here we see a record button, play/pause and a switch that allows you to enable or disable the microphone. The side opposite to the controls has a simple but elegant Creative logo. 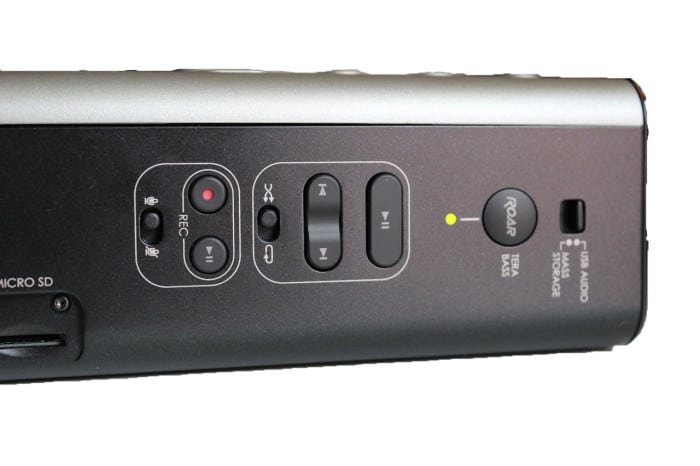 On both ends are machine finished passive radiators that are designed to deliver unparalleled bass reproduction for its product class.  This design not only adds to the sophisticated look, but users can not only hear the difference they make, but they can also see them pulsate as they rock out to some tunes. 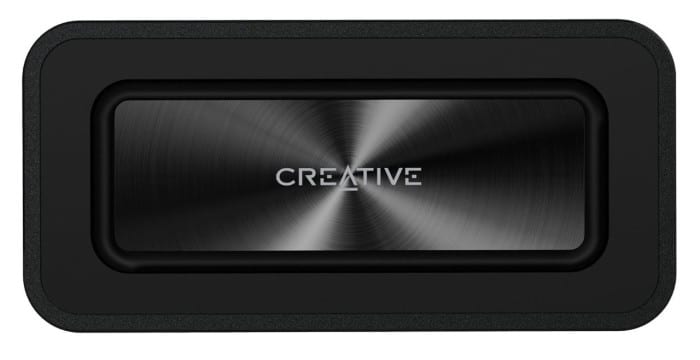 Inside the box we find a AC wall outlet to plug into the Roar 2 to charge the unit, it is also possible to charge it via the supplied Micro-USB cable/connection. Also included is a 2.5inch audio cable that allows the users to use the system wired and a user manual. 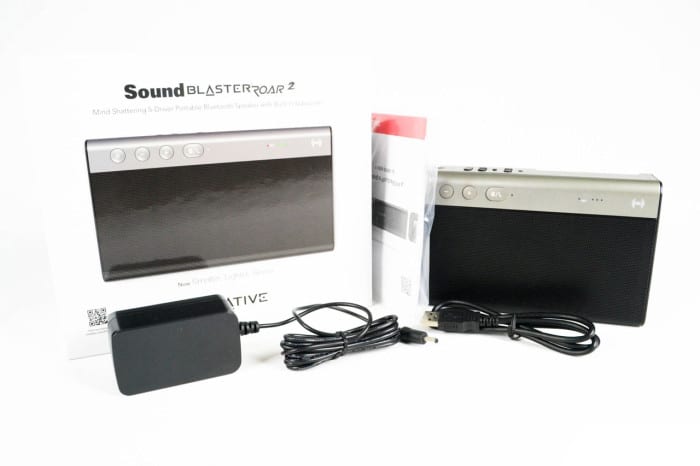 The Sound Blaster Roar 2 we found to be a excellent choice for compact Bluetooth speakers in the premium market. The features and audio quality impressed us and we were pleased by the user friendly controls.