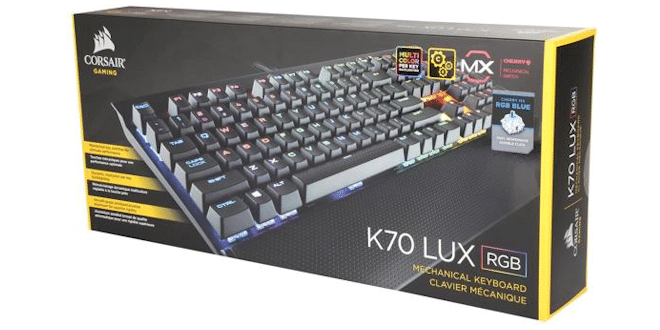 A Closer Look At The Corsair K70 Lux RGB

Our K70 Lux RGB came with a small ding in the box, but that’s a shipping problem, not a Corsair problem. We were in the lab when the box hit the door and we mean literally hit the door. We heard a thump and turned to see the driver tossing it from about three feet away from the door. Fortunately Corsair’s design was more than adequate to handle the gorilla like treatment. Remind us to leave a banana on the porch to distract them next delivery day.

Inside the outer packaging and protected by double-wall cardboard, the Corsair K70 Lux RGB was unharmed and arrived in pristine condition for testing. The keyboard’s interior shipping container was a bit dented on the left hand corner but hadn’t impacted on the keyboard, showing the craftsmanship and design thought Corsair puts into their packaging.

Shown here with the included soft touch palm rest and a multitude of colors caressing the Corsair RGB LUX, the visual impact is stunning. We would have liked to see keys brighter in direct light, but it’s not much of an issue, as not many people game with a direct light reflecting off their screen, though we are sure some will grumble about insufficient light. 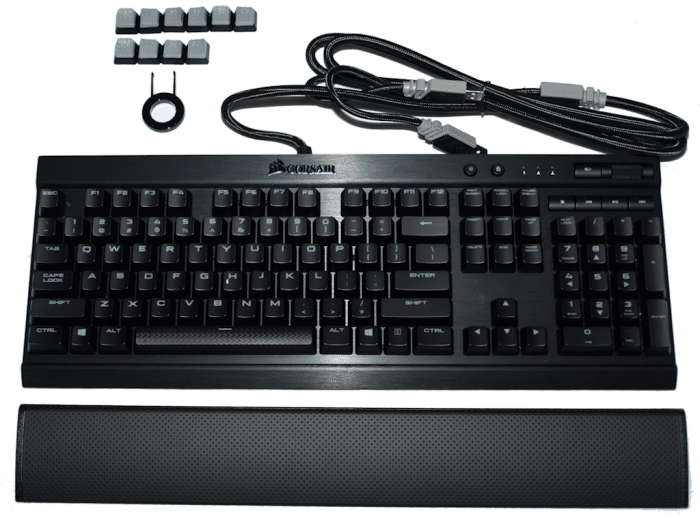 In the box are a couple of quick start pamphlets, the soft touch palm rest, the keyboard itself, and to our surprise, interchangeable keys for WASD and other keys. The included interchangeable keys have a textured design with beveled edges to let you know which direction key you have under your finger. You also get a key popper to easily remove the factory stock keys. The keys and key popper were available for the last iteration of the K70 line, but as an extra you had to purchase separately, so we are glad to see their inclusion to bolster the premium price. 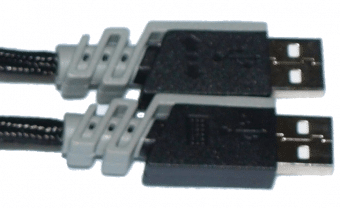 Like most of the RGB keyboards we’ve see there are two USB plugins to deal with, but you expect two on luxury keyboards.

Now there’s been some confusion about the BIOS switch on the Corsair K70 LUX KGB. Some think it’s so you can save a profile on the keyboard to separate BIOSs which isn’t the case. Due to the complexity of the keyboard, some motherboard BIOSs won’t recognize the LUX 70. If that’s the case then switch the BIOS to the next setting and repeat until your motherboard recognizes the keyboard and you’re set. There is also a USB pass through, and in this price range a 3.5mm audio jack wouldn’t have been out of line.

The matte black finish on the anodized brushed aluminum Corsair K70 LUX gives it a professional gamer look and feel and overall the keyboard feels sturdy; sturdy like you could beat back a horde of Orcs descending on you just by whacking them with the keyboard. Corsair addressed one of our personal preferences: multimedia keys. We want, and demand, multimedia keys and Corsair did a good job of tucking them out of harms way. 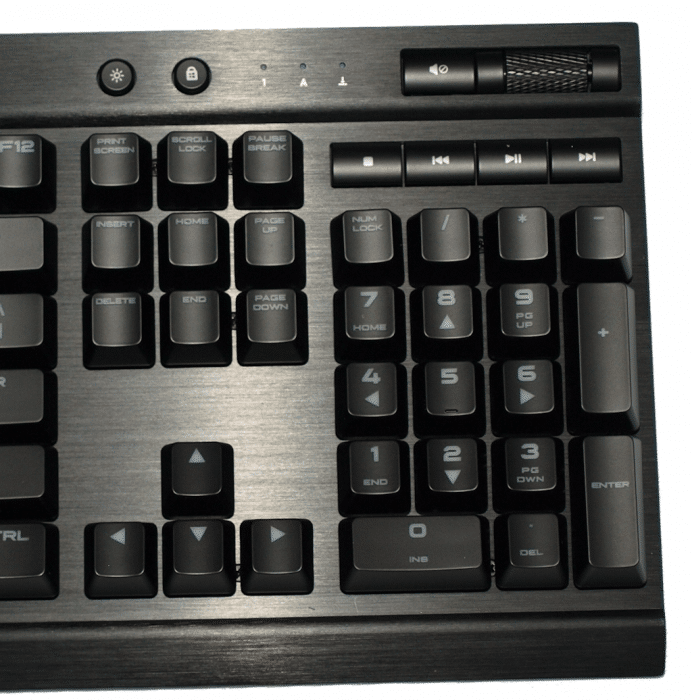 Getting closer in on the multimedia keys you have a unique sound wheel to adjust sounds easily and we have to say we love that feature. The ease of adjusting sound levels if things get a little heated in battle have never been easier. Roll the wheel down and the deafening volume retreats to enjoyable. If someone pops in you can dim the noise further to hear them. The other multimedia controls include Stop, Last, Play/Pause, and Next. Many of this year’s gaming keyboards have left the multimedia keys off and this gives Corsair some points on the board for functionality and unobtrusive placement.

Corsair went with raised keys which makes it easier to keep the underside of the keys cleaned, but in some cases it can open up a larger space for things to slide under the keys. We haven’t had any problems with the elevation of the keys and typing this review with the Corsair LUX 70 RGB has been a comfortable pleasure. 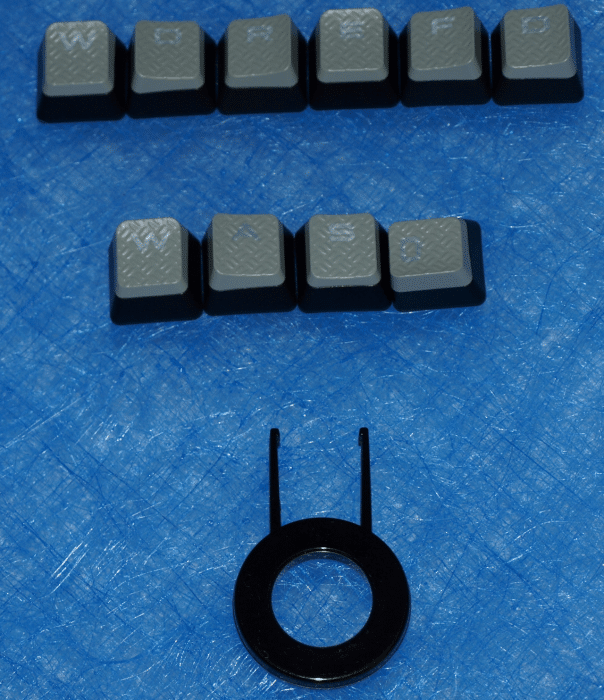 Shown here on a contrast background the included keys have a textured cap to set crucial game keys apart from others. The key popper makes it a snap to remove the old key cap and then you just gently pop on the new cap and you are set. This comes as no additional charge, and a customized keyboard is sure to draw the eyes of anyone nearby. The key add ons are specifically for FPS and MOBA games, but should be useful in a variety of other games as well.

We dimmed the light in the room and took this shot of the Corsair K70 LUX RGB to give a good representation of what you will see in the daytime with the shades drawn and the room light off. We’ve seen people complain about the lighting being too dim, but it could be the room was just to bright. We didn’t experience any “too light color” problems during testing and suspect environmental lighting to be the problem and not the Corsair K70 LUX RGB.

The Corsair Gaming K70 LUX RGB Mechanical Keyboard W/Cherry MX RGB switches is a serious contender for "Best Keyboard of the decade". The different switches you can get allow customization and the gaming experience is unparalleled!