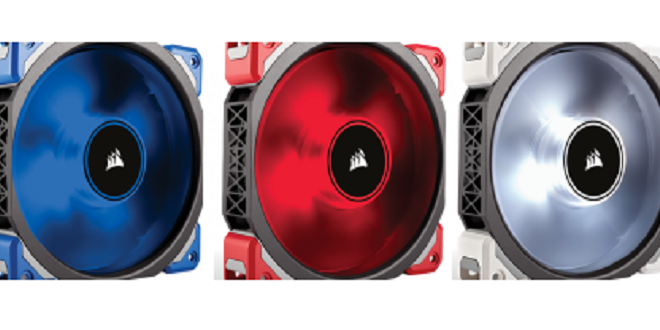 Testing fans is a bit of a subjective call and what we like to do is hook up the fan to a PWM header on a motherboard with BIOS control over the fans and run it at default speed then kick it up to 100% representing the average noise and the max noise. We also like to turn off the lights and photo the fans and at times run a video. It gives us a nice cross-section of how the fans look and performs.

Lets start with a 16 second video taken with a Kyocera C6530 cell phone. Be sure you have your sound up.

Now that’s the way to go stick a camera 12 inches from a running fan and let the reader decide. We were perfectly happy with the intensity of the LEDs and noise levels. 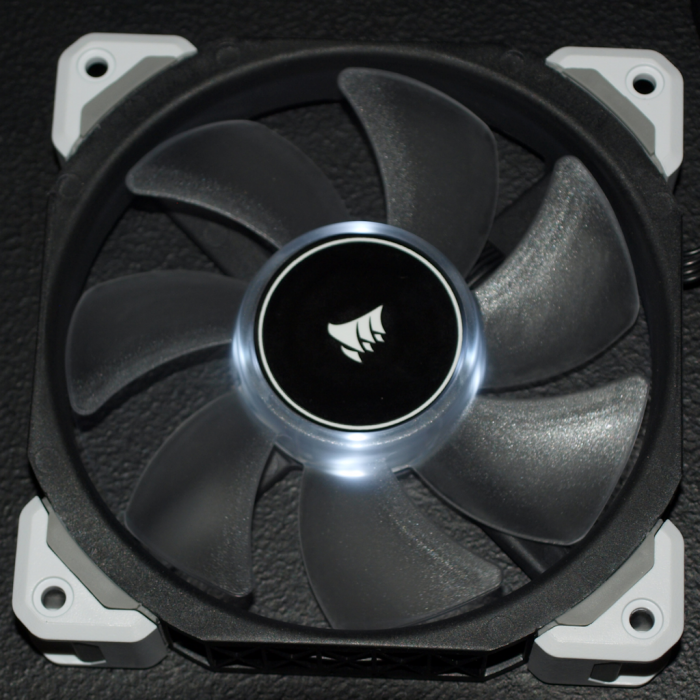 We chose a dark black matte finish table for testing which lets us shut down the lights and take better photos. 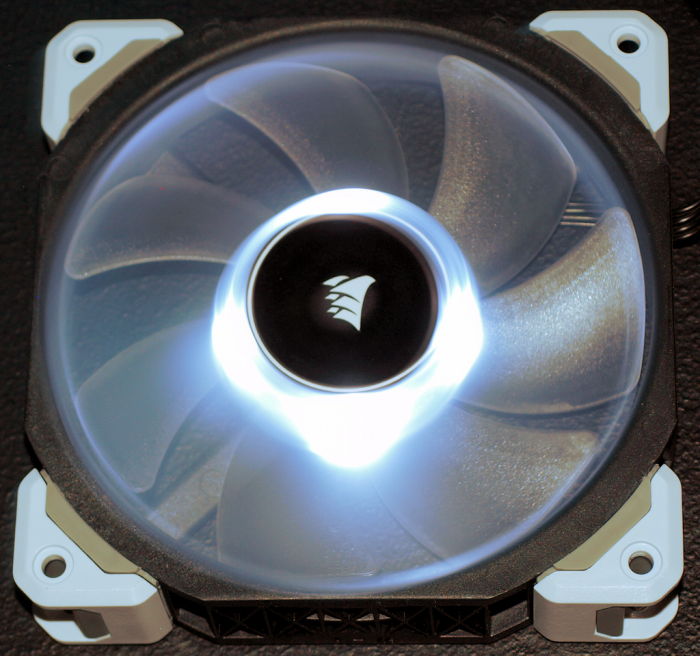 As we mentioned before the 4 center hub LEDs are quite striking and 3 – 5 of these in a chassis will definitely light up your entire chassis. 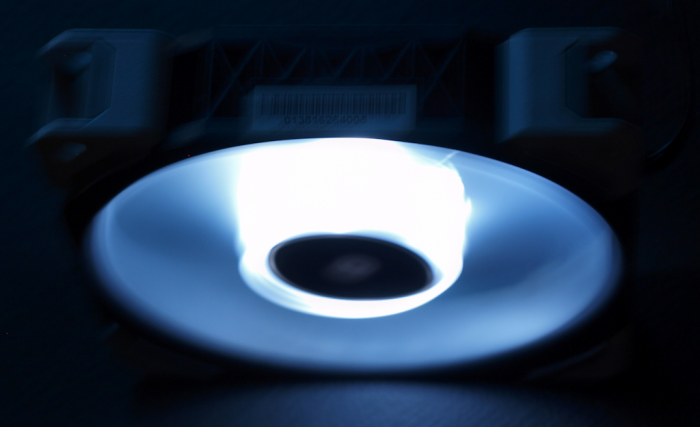 As we change the camera angle you get a better idea of how the fans will look in your chassis. 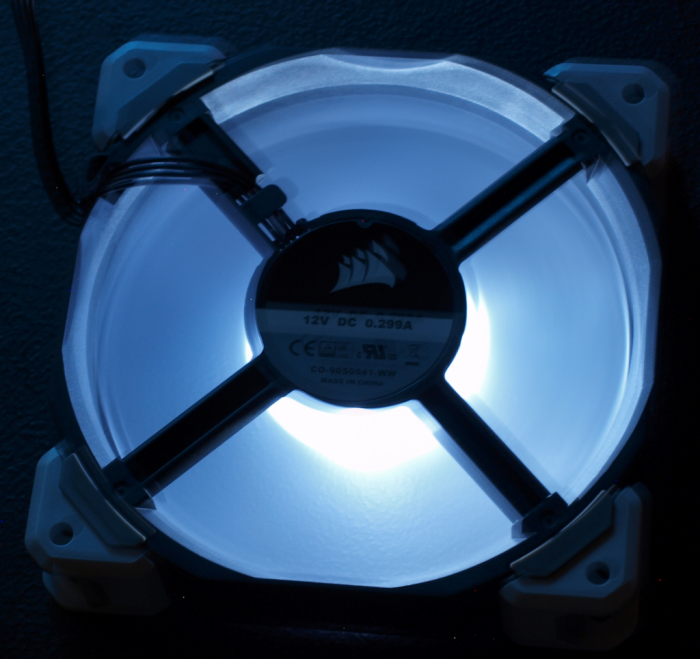 From the back you still get good pyrotechnics and front or back you’ll have plenty of light. 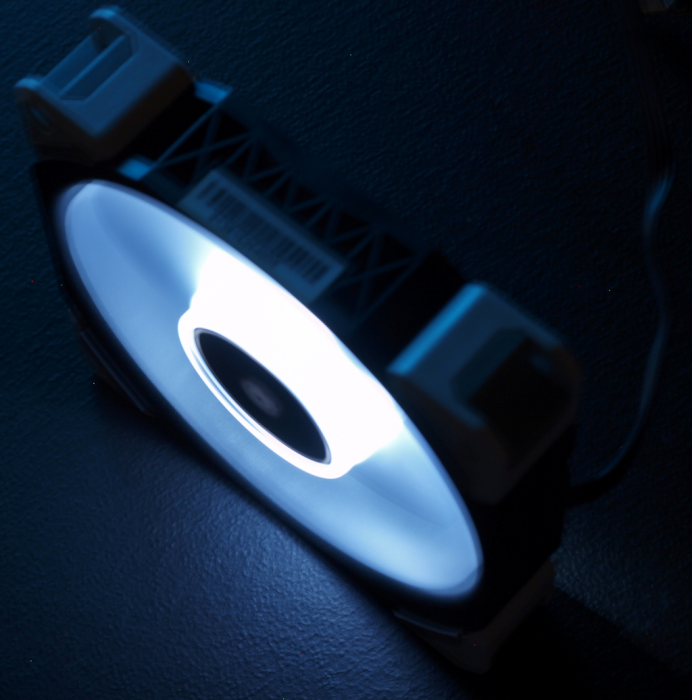 You just can’t get much better LED lighting than that from a Fan and the center positioning of the LEDs performs well. The positioning also eliminates the need for wires ran to the fame mounted LED’s we see on most fans and we would expect to see other fan companies scrambling to catch up and use that innovation. 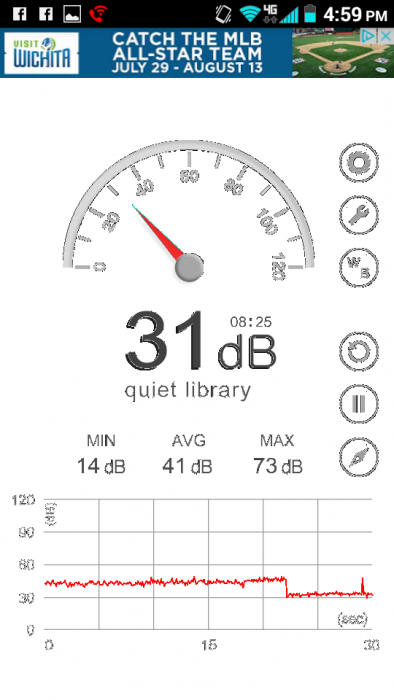 We ran the Corsair ML120 PRO LED White 120mm Premium Magnetic Levitation Fan for 5 minutes to warm it up then fired up a dBA recording device and registered a 31dB at 1800 RPM (roughly 63.3% fan speed). That’s about the level of a quiet library. 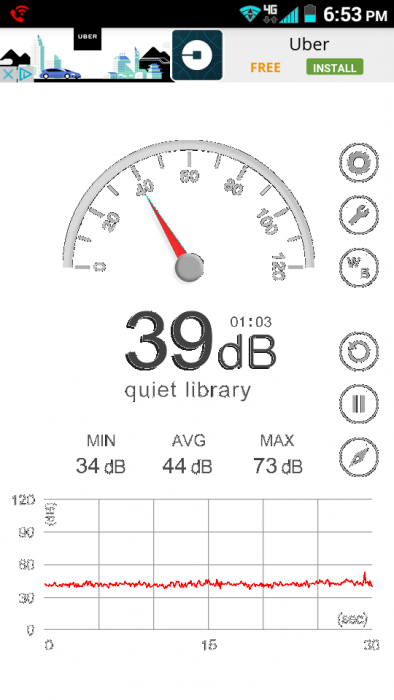 Here at 100% fan speed we got a completely acceptable 39dB from 12 inches away and compared to most 75 CFM fans this is an extremely quiet fan Corsair put out.