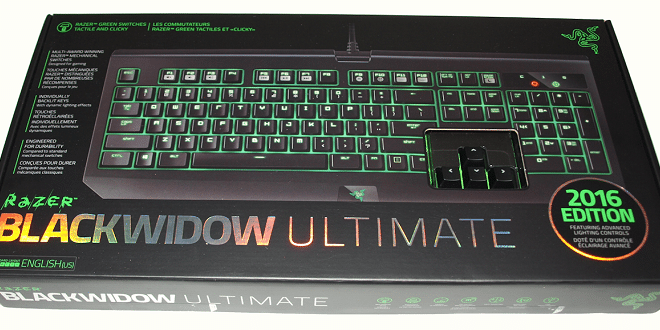 Razer keeps refining and redesigning their products to better fit todays gaming needs and the Razer BlackWidow Ultimate 2016 Edition is no exception. The keyboard it

self has a nice heavy quality feel to it and that’s one thing we demand in our keyboards is a nice hefty solid feel to them. You don’t want to go out $110 for a keyboard that weighs 8 ounces and breaks the first time it slides off your lap during intensive gaming. The expected lifetime of one of Razers Mechanical keys is 60 million keystrokes and we can first hand vouch for the BlackWidow series keyboards durability. We have the original BlackWidow and it’s traveled many thousands of miles to different events and shows and it still functions like the day it came out of the box.

The keystrokes on the Razer BlackWidow Ultimate 2016 Edition are solid and provide a tactile response letting you know the key has been pressed and it is a little clicky sounding but not nearly as clicky as the original BlackWidow. We are a bit old school and the clicky original still has a big place in our gaming hearts but the advantages the BlackWidow Ultimate 2016 edition has over the original are a bit overwhelming. Every key can be independently programmed, in-game keys can be highlighted individually mapping out the path to your enemies destruction.

We like the Razer BlackWidow Ultimate 2016 Edition and it does come in at a fair price point considering the costs of previous generation BlackWidows and even manages to surpass some of the more expensive variants we’ve seen.

Trust us when we tell you that you want to be the guy with your gaming profile well setup and driving a Razer BlackWidow Ultimate 2016 to help give you the gaming advantage against your unsuspecting opponent. Well that is unless he’s rocking a BlackWidow Chroma and has his profiles setup because your own your own there and skill will prevail. Best to be prepared and drive one of the high end Razer Gaming keyboards because you just never know when your going to walk into a bees nest of an ambush.

The Razer BlackWidow Ultimate 2016 Edition is a precision instrument of gaming destruction that is fully programmable and has features you will be discovering a year from now.