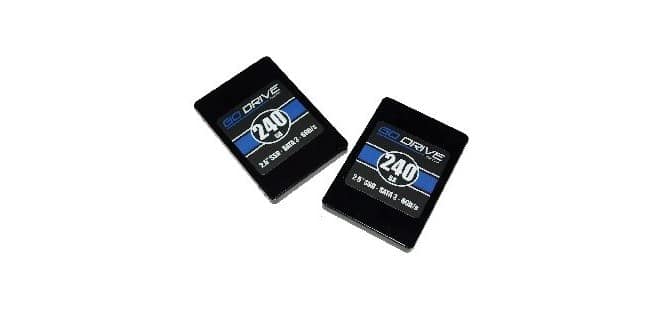 The VisionTek 240GB Go Drives performed well in RAID 0 and gave us a larger contiguous space than individual drives.  The limitation on the Sata 6 interface is

600MB/s theoretical, sustainable speeds are more in the 550MB/s range so single drive you’re faced with that limitation period. In most cases a RAID 0 array will be faster than a single drive as the VisionTek 240GB Go Drive RAID 0 array proved today.

If we’ve put 4 identical SSD’s on a RAID 0 array on several motherboards and the total bandwidth we could achieve was 1500MB/s with 4 drives. The more drives you add the more chance you have of a RAID 0 Array Failure. Two won’t give you much if any problem and surely adds some speed to your systems equation. It still is important to understand the risc though as a failure in one of the discs will mean lost data. This is also why it is good to use RAID0 for the OS while putting data on a different volume.

We like the VisionTek 240GB Go drive both in single drive and in RAID 0, it’s built duraclass tough and uses a well-tested and trusted SandForce controller fully capable of saturating a single Sata ports bandwidth. You can throw any controller you want on a drive and it doesn’t matter if the controller is capable of 900MB/s because SATA 6 says whoa boy we only run at 600MB/s on this range.

You can cheat the Sata speed limit with a VisionTek Raid 0 array and do it in the $255 dollar range as opposed to hardware RAID which is going to cost you a bundle. Now at $127 per drive that’s a little more than some drives we’ve seen but not all drives provide the quality, longevity and 3 year warranty the VisionTek Go Drive does.  VisionTek has picked solid technology and you pay a little more for good technology. We don’t mind giving the VisionTek 240GB GO Drive RAID array a Golden Bear Award, the longer we live with, benchmark and use the VisionTek Go Drive the more we like it.