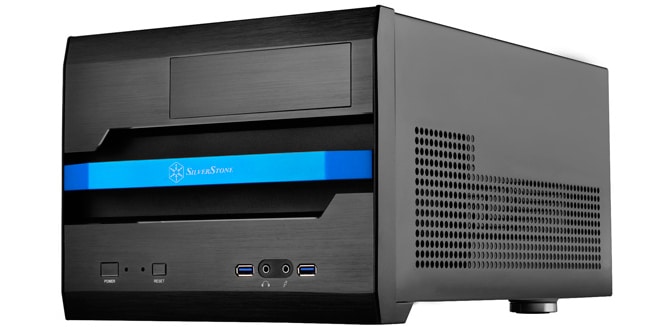 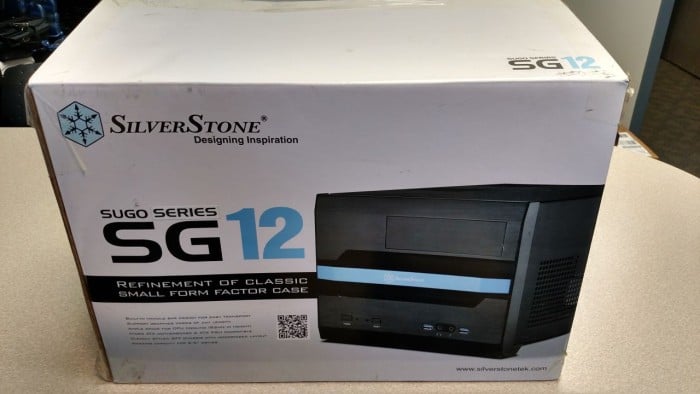 The SG12 comes in a simple, glossy white box with a few shots of the case to give a quick look at what is inside. The side panels feature a quick introduction to the case, as well as a specifications table that details the case’s features. The SG12 inside is wrapped in plastic and protected by foam end-caps to keep it safe in shipping. 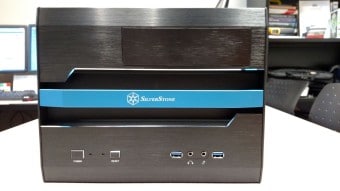 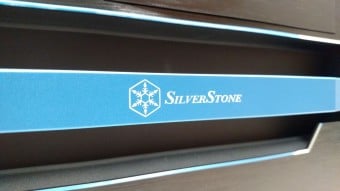 The front of the SilverStone SG12 is home to a brushed aluminum front panel with a few polished accents. The brushed texture and polished outlines give the SG12 a very high-end look. As highlighted in the Standout Features section above, the front of the SG12 also features a bright blue aluminum carrying handle that is adorned with the SilverStone name and logo. The handle has a matte finish to it that doesn’t show fingerprints very easily, which is nice, since it is to be used as a functional handle. 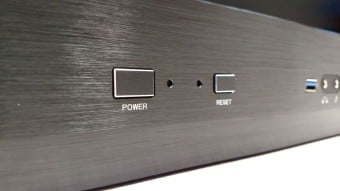 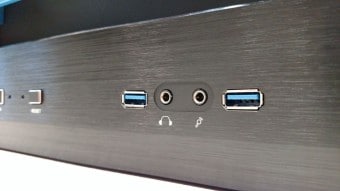 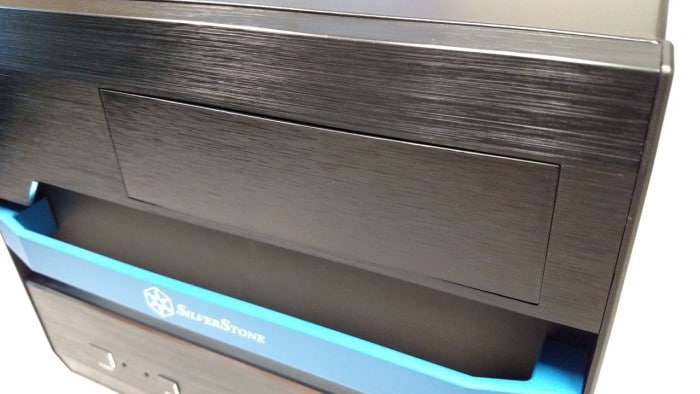 Situated on the left side of the front of the case, just below the carrying handle are the POWER and RESET buttons, both with matte finishes and polished edges. Sitting in between the two buttons are the power and HDD indicator LEDs, both blue in color. On the lower right side of the case are two USB 3.0 ports and the headphone and microphone inputs.

Just above and to the right of the carrying handle is a panel that can be removed for installing a 5.25″ optical drive or drive bay accessory. This feature is something that is becoming harder to find on SFF cases, as interior space is at a premium with these small builds. Outside of being utilized in an HTPC, many users have no use for an internal optical drive, with so much media being provided via downloads. With the SG12, it is nice to know that the option for an ODD is there. 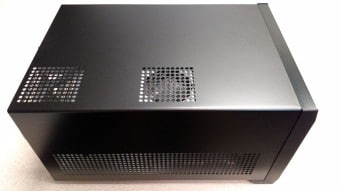 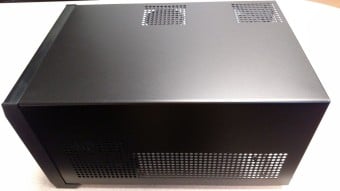 The outer shell of the SG12 is a single piece of steel, with a semi-gloss black finish. Moving around to the sides of the SG12, you will notice the perforated side panels that allow for some mostly passive air flow. While the left side of the case has uniform perforation along its lower section, the right side has a slightly larger area that sits in front of the 120mm fan that is used on the 3.5″ hard drive mount. 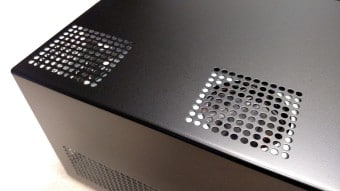 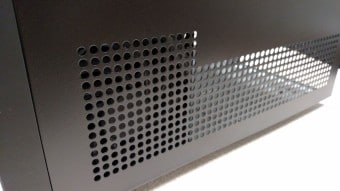 The SG12 is slightly lacking on cooling fan mounting options, as well as included fans. The top of the case features just two 80mm mounting positions, both of which do not include a fan. The flush mounted fan position can be used as either an intake or exhaust, depending on the components chosen to reside in the case. The rear 80mm fan mount is placed at and angle and intended to be an exhaust option. Depending on the size of video card installed in this case, a standard 80mmx80mmx25mm may not fit. In order to move the same amount of air as a 120mm or larger fan, the use of 80mm fans in these locations means that they will need to spin at higher RPMs. With these higher speeds comes a higher sound volume. One thing that really stuck out to us visually was that the interior steel of the case was visible on the top of the case in both fan positions. A matching black interior would have created a more seamless and high-end look. The 120mm fan used to cool the 3.5″ drive bay pulls air in from the right side of the case. We noticed that this air flow could be felt exiting the left side of the case via the perforated side panel. 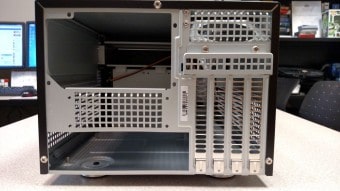 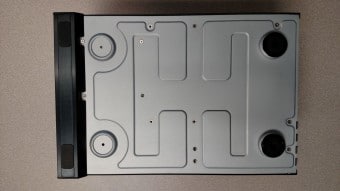 Moving around back, we can see that most surfaces are perforated in one way or another to assist with passive air flow. A standard size ATX power supply can be mounted at the top of the case and will help act as an exhaust fan for the case. Just below the PSU mount is space for an optional cross-flow fan. Unfortunately, SilverStone no longer produces their cross-flow fan, so finding a model to fit this spot may be tricky. The angled exhaust fan at the top of the case also has a grille at the rear of the case, and just below that are the four I/O card covers, also perforated.

The bottom of the SG12 provides access to the screws that hold the internal 3.5″ drive bay in place. These screws can be removed to allow the drive bay to come out of the case for easy drive installation. The front rubber feet are mounted directly to the front aluminum panel, while the rear feet, with their signature SilverStone look, attach to the bottom of the case itself. 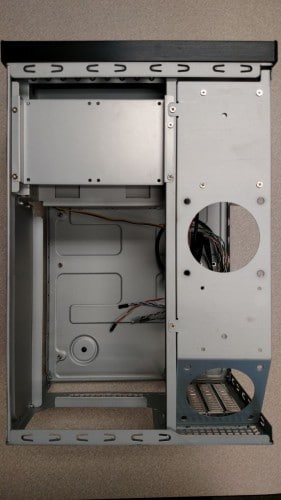 With the exterior shell removed, we can see two of the 2.5″ drive bays that are just above the 5.25″ drive bay. The tray that they mount to is removable so that the drives can be secured via their bottom mounting holes. Running down the center of the case is a support bar that not only provides strength to the case, but also acts as an attachment point for the drive bays and fan panel. Along the right side of the case is the fan panel that is used to attach the optional 80mm fans mentioned earlier. As with the rest of the interior of the case, this panel is a standard, “Steel Gray” color. A painted interior that matched the exterior of the case would have really made this case look sharp. 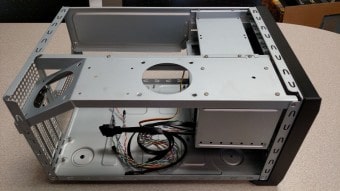 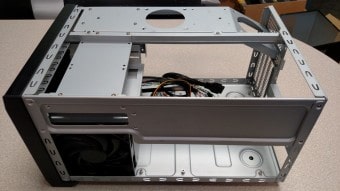 Taking a look at the sides of the case, we again see the fan mounting panel that spans the length of the right side of the case. Attached to this panel is a removable drive bay that can hold up to seven 2.5″ drives. On the left of the case we see another stabilizing panel running the length of the case. Thankfully, SilverStone thought about system builders, and provided access to the mounting holes for the 5.25″ drive bay via a small window. Below the panel we see the 120mm fan for the 3.5″ drive bay. 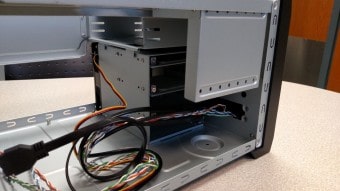 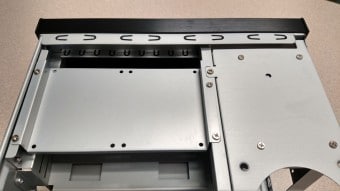 Taking another look at the right side of the case, we see the “hanging” 2.5″ drive bay. Being removable, this drive bay can be removed to from the case to install drives, or left out to save on weight when not being used. The bundle of cables coming from the front panel enter the case via a small passage on the front of the case. A closer view of the top of the interior gives a closer look at the removable 2.5″ drive bay. 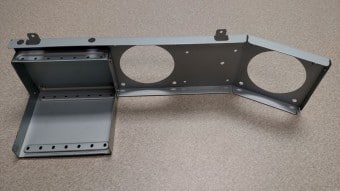 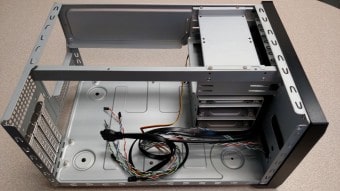 With the 80mm fan panel removed, and with it the mounting bay for the seven 2.5″ drives, we can get a better view of the interior of the SG12. From this view of the interior, we are able to see just how video cards up to 14.5″ in length can fit in the SG12. If the first PCI-E slot on a motherboard is used for a video card, the length of the card can not exceed 9.8″ with the included hard drive bay fan installed. If a different fan with a smaller thickness is used, the drive bay can be shifted to allow for a longer card. If the second or third PCI-E slot is used for a video card, there is no need to change the drive bay configuration, and a card of up to 14.5″ in length can be installed. 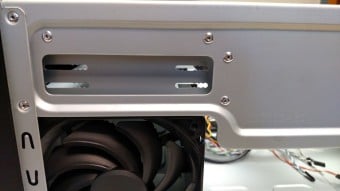 Here we see the small window in the right side support panel that allows access to the 5.25″ bay screw holes. Just below the 5.25″ bay is the 3.5″ drive bay with its attached 120mm fan. 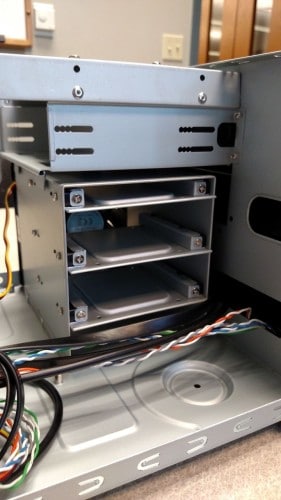 This shot gives us a look at the three 3.5″ drive bays with removable trays. While the entire drive bay can come out of the case, each tray can be removed individually as well. Access to the other side of the 5.25″ bay screw holes is also available when the fan panel and 2.5″ drive panel are removed. 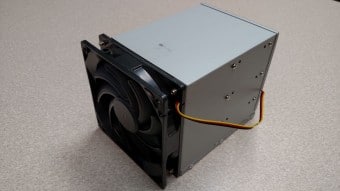 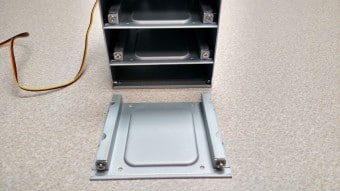 With the 3.5″ drive bay removed from the case we can get a better look at the fan and the drive trays. These trays allow both 3.5″ and 2.5″ drives to be installed, and are secured to the drive bay with two screws each. 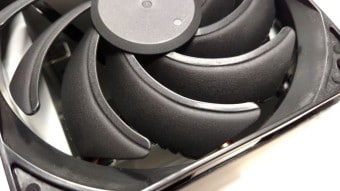 The included 120mm fan used on the 3.5″ drive bay has a maximum speed of 1200 RPM and connects via a 3-pin header. The nine blades of the fan each feature notches on the back end of the blade to reduce noise.

SilverStone has had great success in the past with their SUGO line of small form fa ctor cases, and the addition of the SG12 should help them to continue that success.