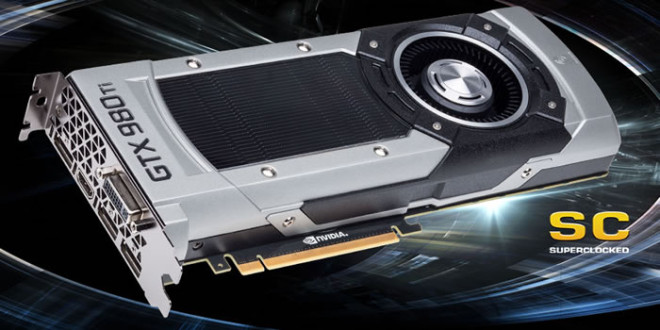 Not long ago we did a first review of the EVGA GeForce GTX 980 Ti Superclocked+ ACX 2.0+ which we of course loved because who cannot love a card with that much power? Today we are following up with another EVGA card, the EVGA GeForce GTX 980 Ti Superclocked. It is almost the same card as the previous one as it has the same clock speeds. The big difference is that this card uses the reference design while the Superclocked + ACX 2.0 uses a dual-fan-configuration. In this review we will focus on the performance difference against a high-end GTX 980-card (the pre-overclocked Zotac AMP! Omega-edition card) and specifically how it handles 2560×1440 and 4K-resolutions.

Since my collegue Mark already wrote a nice intro for the GTX 980 Ti I am going to re-use it here as it of course is just as true for this card.

What does all that add up to? The EVGA GTX 980Ti is a lot closer to the power of the Titan X than the GTX 980 is. Now don’t get us wrong, the GTX 980 is one powerful card and we wouldn’t kick 3 of them out of our test bed by any means but a single EVGA GTX 980Ti is enough to game at 4k resolution with the Titan X and everything else we’ve seen struggles with 4k gaming. Given the choice of GTX 980 SLI or the EVGA GTX 980 Ti SC ACX 2.0+ we’d pick the EVGA GTX 980 Ti SC ACX 2.0+ hands down. The Scaling in SLI might pick up with Windows 10 and DirectX 12 but scaling still won’t be 100% so we prefer single powerful GPU’s but don’t have anything against running a secondary GPU for Physx..

With DirectX 12 coming out in full force later this year (Late July with Windows 10) DirectX 12 promises to be a game changer for PC enthusiasts. Right now the only way to take advantage of that game changing is an Nvidia 900 series GPU. AMD will shortly release its new R9 300 lineup rumored to have HBM GDDR5 and it’s an exciting time in the GPU arena, so exciting it sends this Geek into trembling frenzies thinking about the possibilities.

Compared to a GeForce Titan X Nvidia choose to slice away two streaming multiprocessors with 256 CUDA cores leaving you with 2816 CUDA cores. We also loose 16 Texture units meaning that we “only” get 176 Texture units compared to the 200 you get in a Titan X.