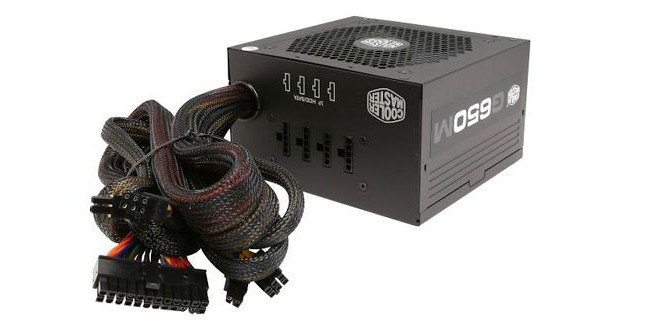 Old school testing of power supplies is pretty straight forward, install the PSU into a system that can make a good load on the Power supply break out the MultiMeter, KillAWatt, infra-red thermometer and dBA Meter. What we look for is as close to the rated full load of the PSU as we can take the machine without popping the power supply or expensive computer components. In the case of the CoolerMaster G650M 650W Power supply we are looking for between 550 and 560W for as heavy a load as we want to put on it. Why 550 or 560W instead of 650 you ask, 550W is approximately 90% load for the +12V 624W rated single large Rail. Spitball math 624 X .90 = 561 so at 560W we are a hair below 90% of the +12V rating which is actually an insane load to consider running for any length of time other than for testing. You should figure the anticipated maximum load of your machine and say it’s our projected 560W total draw then you will probably want a 750W PSU because at maximum load (560w) a 750W PSU is about 75% loaded. Follow that wisp of wisdom or don’t but remember components pushed to the brink often take a dip in the lake that is your wallet,

Once we have the rig delivering the desired load at peak we test the PSU with the rig at an idle, then ramp it up in increments and take readings at different voltage draws until we finally have the full load draw we want then we take the final readings, thermals and noise.

Well be using Cinebench and ROG Bench to drive both the GPU and the CPU as hard as they will go, whichever provides the greatest load is the winner or we use both while we enjoy an IV of please don’t pop.

It looks like the CoolerMaster G650M just missed the under 3% mark at an idle, a PSU that holds under 3% isn’t industry standard. The Industry standard is 5% or under, under 3% gives a PSU a shot at a Gold award if all other things, noise, thermal readings and the whole ball of wax are good. Anything over 3% Gold isn’t an option. At 193W we were just over the 3% line but as we increased the load the voltage regulation tightened up and got well under 3%. The voltage regulation on the CoolerMaster G650M is good and exceeds the industry standard.

Thermally speaking at full load we measured the exhaust at 47°C and which isn’t bad for thermal exhaust so there’s no problem there.

Noise wise the fan was clearly audible during heavy load periods and at two feet away our Decibel meter, a Wensn FZ-032 rated at 30dBA – 130dBA we recorded a 37dBA level with the PSU outside the chassis sitting on a neoprene pad. Buttoned up inside the Raven RV01 measured from 2 foot away from the side of the chassis we registered a 35dBA and the fan was still audible but not overly annoying. We prefer silent operation on PSU so the noise level will cost the CoolerMaster G650M a few points.

The CoolerMaster G650M PSU held up under FIre, Triple X-Fire that is and that's says a lot for the little 650W powerhouse.