We will use the following applications to benchmark the performance of the Nvidia GeForce GTX 760 video card. 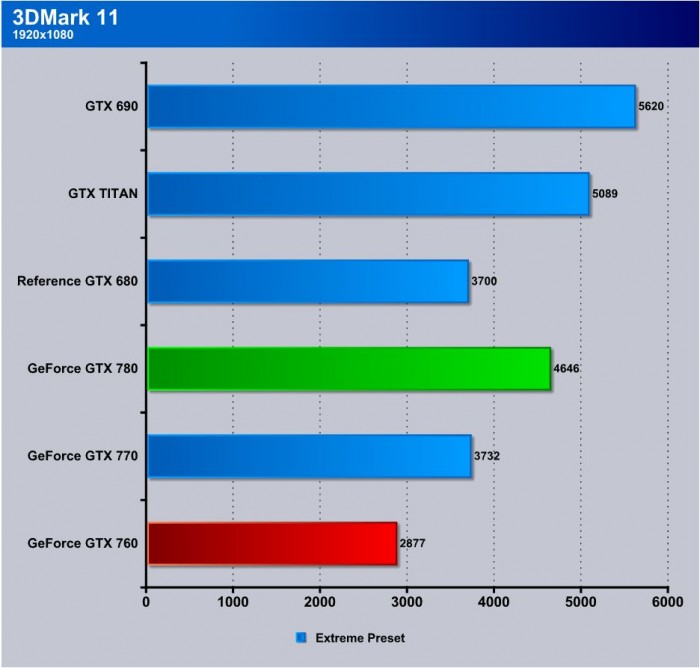 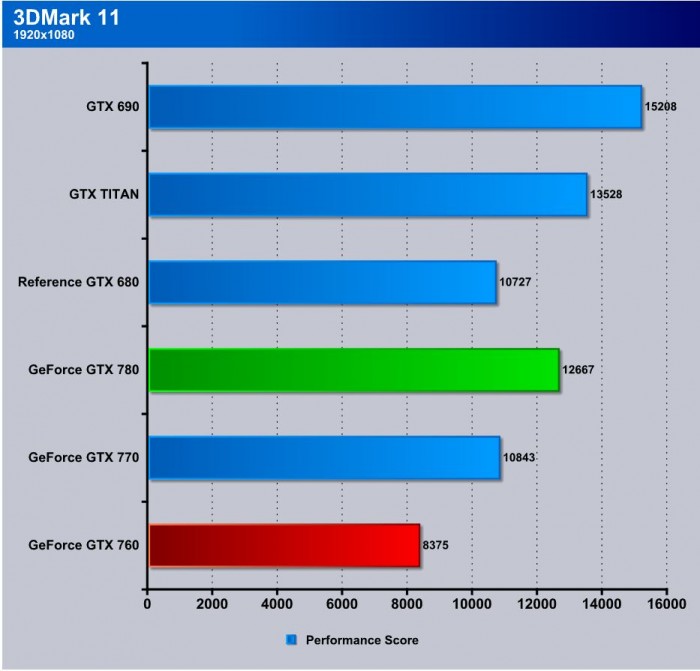 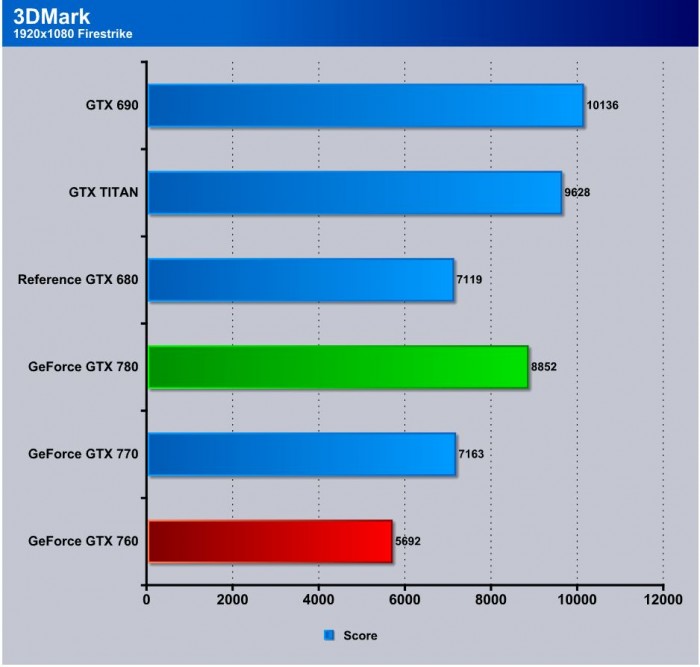 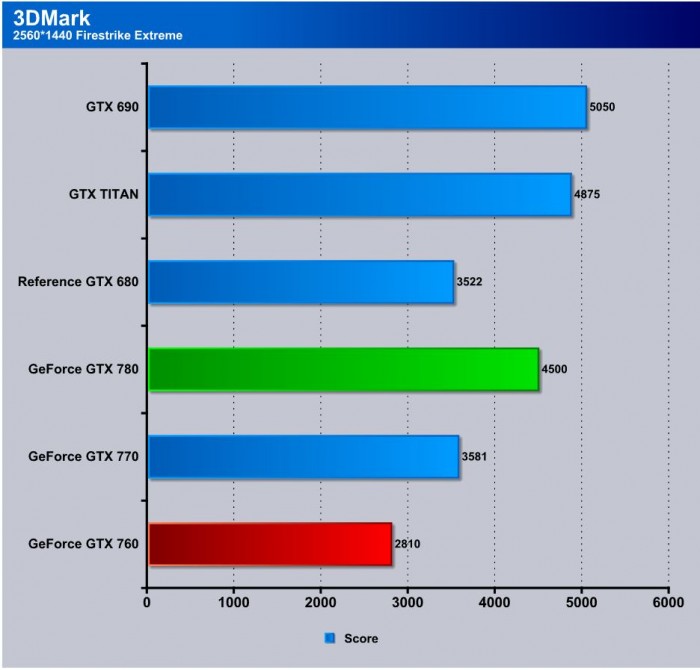 Here once again you see that the card pulls a respectable score but simply is outpaced by its faster big brothers. However, for 150 less this is a easily acceptable result. 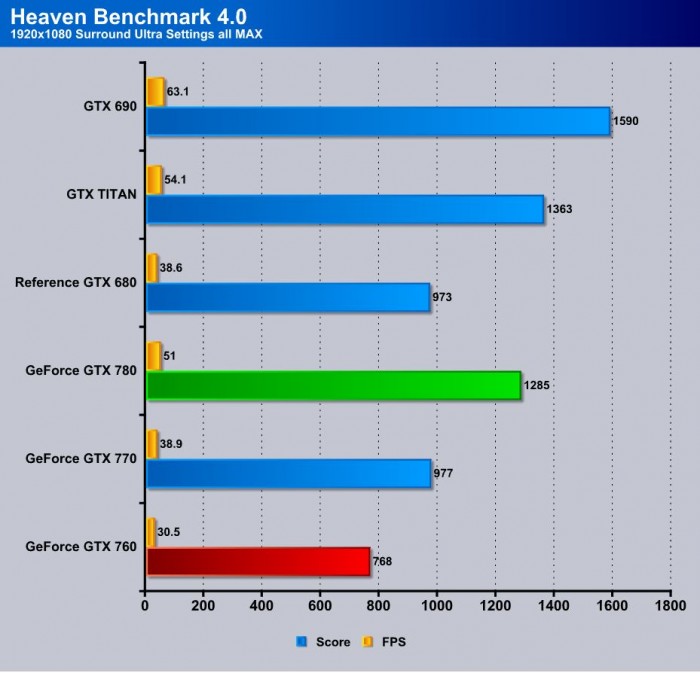 The fact that the 760 can pull over 30FPS average at all maxed out settings on heaven is a testament to the raw power available from the mainstream card since it is working with a GPU with much lower core count and even slower memory. Let us not forget that Heaven is super stressful. 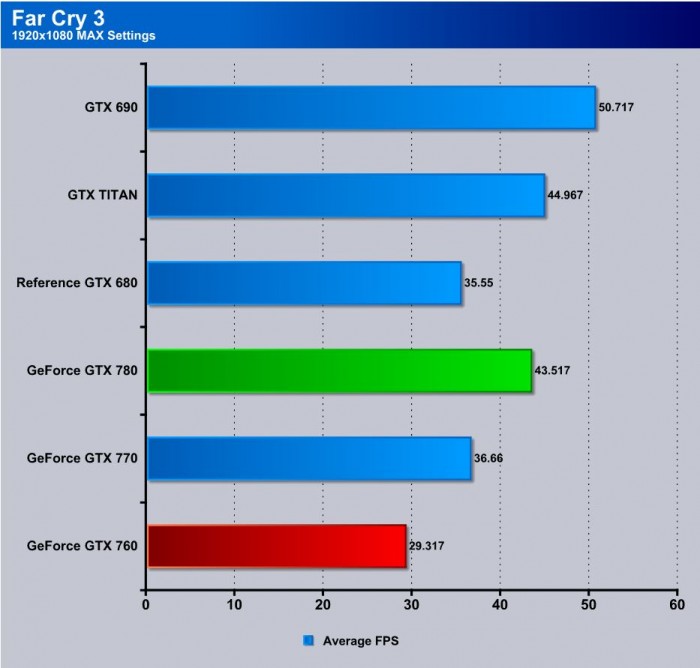 Moving over to Far Cry 3, we used a pre-determined path and re-ran each card to monitor average FPS across the complete run. Each run was completed multiple times to ensure continuity and accuracy. The 760 pushed but had some noticeable stutters so you would need to nudge down settings a bit to get playable, but once again for a single card under 300 dollars it can almost do the latest FPS titles on ultra settings is quite good. 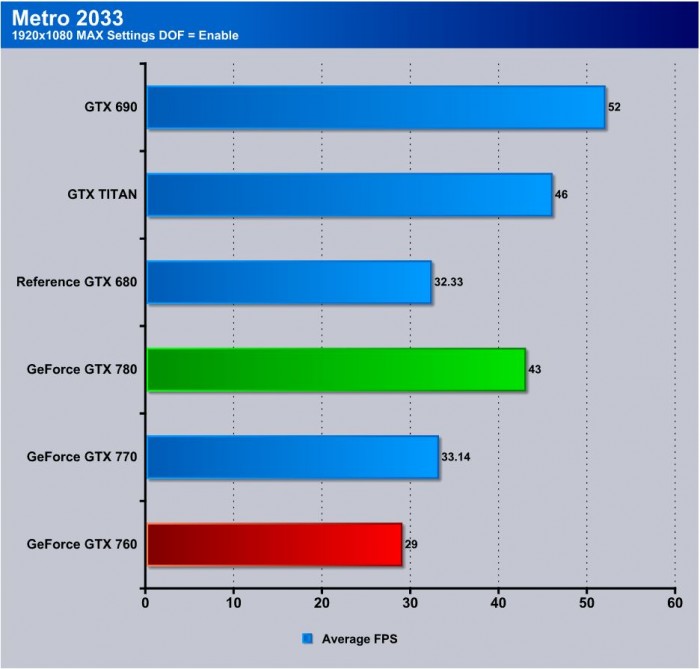 Even after many years, Metro 2033 is still one of the most demanding DX11 video games available to really push the limits of your system. Here we see the 760 fall just shy of 30FPS which really surprised us as this used to be hard on two flagship cards and now you have a mainstream card almost breaking 30FPS average. 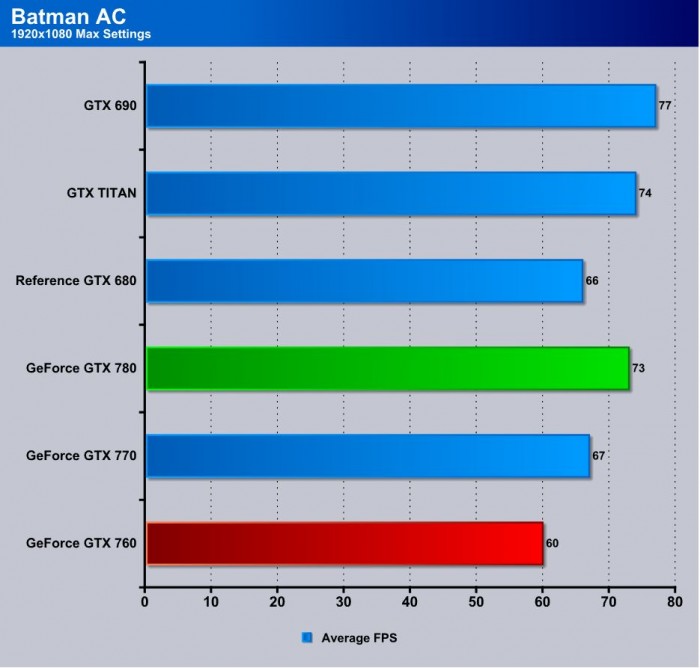 Batman Arkham City is a fun game and utilizes FXAA fully. It is nice to see the full screen anti-aliasing getting picked up by popular titles. The 760 here pulls in just 7FPS behind the 770 and 13 behind the 780 but it pulls an even 60FPS average which means it should be nice and playable at full max detail settings with a single 760. 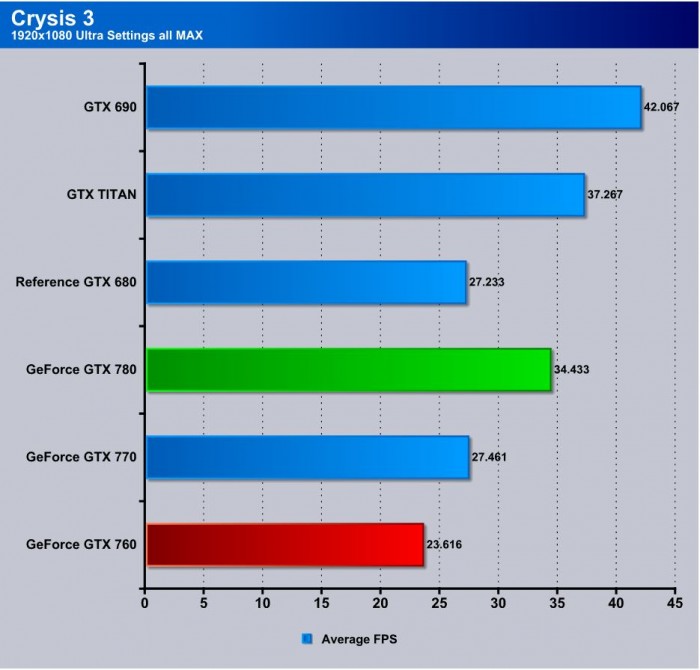 Crysis 3 is much like the original Crysis in that playing it at max settings is painful for even the highest end hardware. The GTX 760 starts to show it here as it simply cannot keep pace at max settings which does not surprise us since the 770 pulled sub-30 FPS numbers as well. For the best performance, you might have to tweak some AA down. 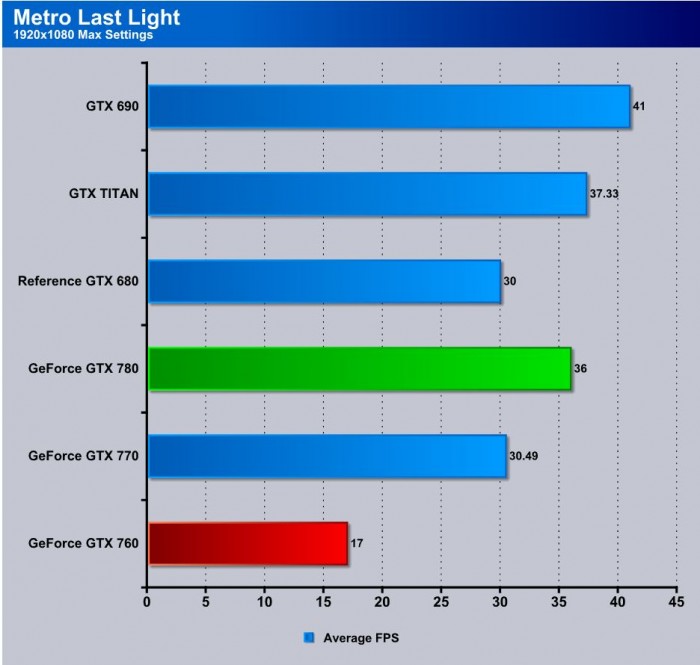 Here we have Metro Last Light which is a brand new game added to our testing platform as it just came out. If you thought Metro 2033 was stressful, you have seen nothing yet. The particles and lighting, as well as the PhysX effects all add up to an amazing looking game that can put a stun even the most powerful system in its tracks. The 760 is simply out matched here and would need some help by either dropping settings or adding a second card. 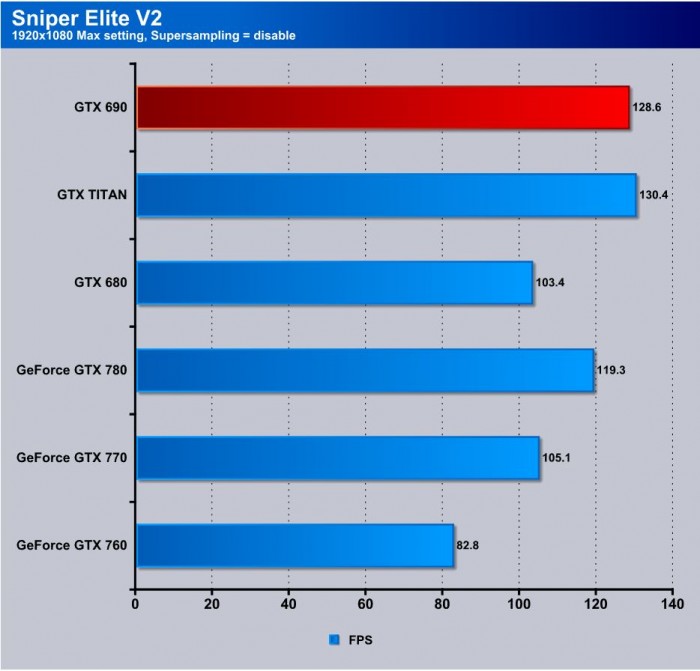 Sniper Elite V2 is a fun game which, when first released, was quite stressful but still playable on most higher end cards. By now, most cards have surpassed it, and all of the cards we are testing here today break the 100 FPS mark. The 760 pulls a over 80FPS average which is more than playable but once again you can see a clear gap between it and its bigger brothers. 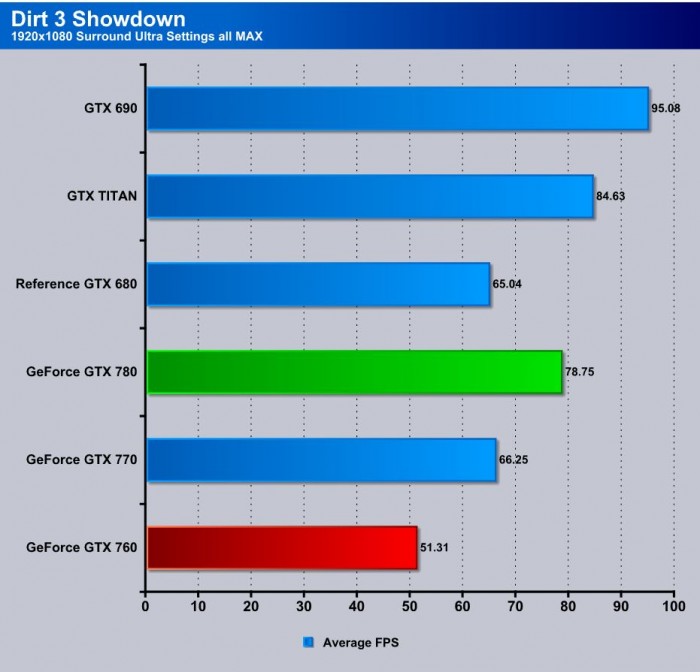 Dirt 3 Showdown is a visually beautiful game with excellent lighting and overall motion blurring creating a real visual spectacle of a game. The 760 pulls a very good showing while it drops below the 60FPS average it still is far above 30 and even the minimum observed was 28FPS which means that stutters are basically non existent at maximum detail. 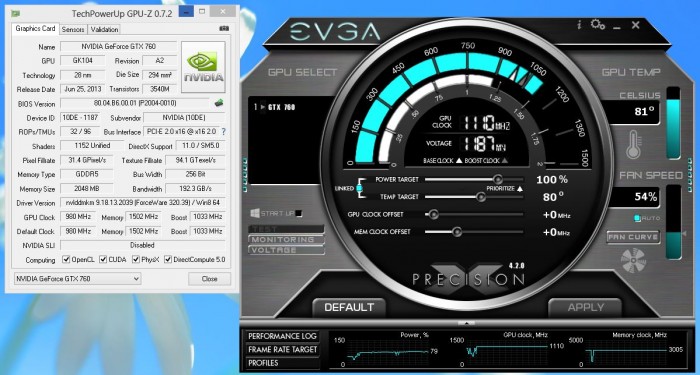 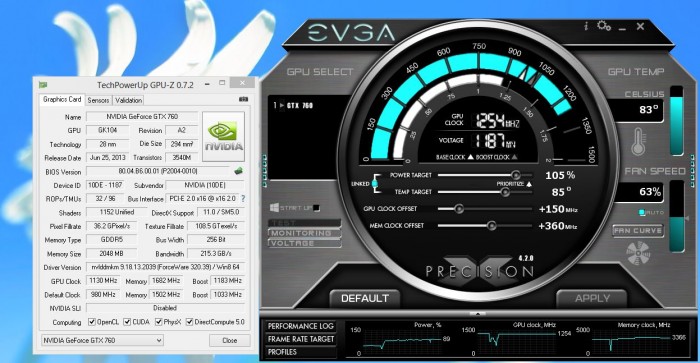 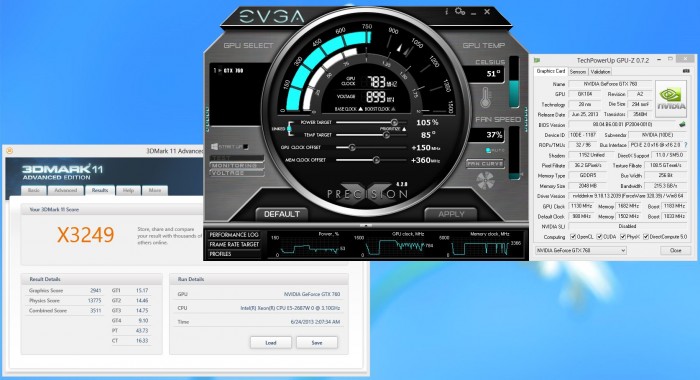 The 760 clocked as well as we could expect from the GK104 core pulling a consistent 1254 Boost clock with the only adjustment being 85C thermal target adjustment. This allows for a sizable jump in performance along with an overall much more powerful card. Even with the thermal target set at 85C, the maximum we saw the card at was 83C GPU temp and that was only for small spikes with most of its time being spent around 80C. This makes us wonder whether an aftermarket cooler would open up more headroom for overclocking, or whether the GPU simply needs to be at cold past this point.

The memory was around what we expected, peaking at around 6728MHz, which is not bad but we have seen it get higher. Now if we could get that on a 4GB model that would be awesome, as some games are starting to tap and exceed the 2GB framebuffer usage mark.

Overall the card as you can see gave off a decent gain in the Xtreme preset with the overclock which says a lot for the capability of the card given you take the time to tweak it up.

The reference shroud cooler does a good job keeping thermals at bay but we really do wonder how much better a third party cooler will perform in comparison. We have seen as much as 8-20 degree drops with some of the cooelrs out there so keep your eyes peeled for the upcoming ASUS GTX 760 DCII OC review 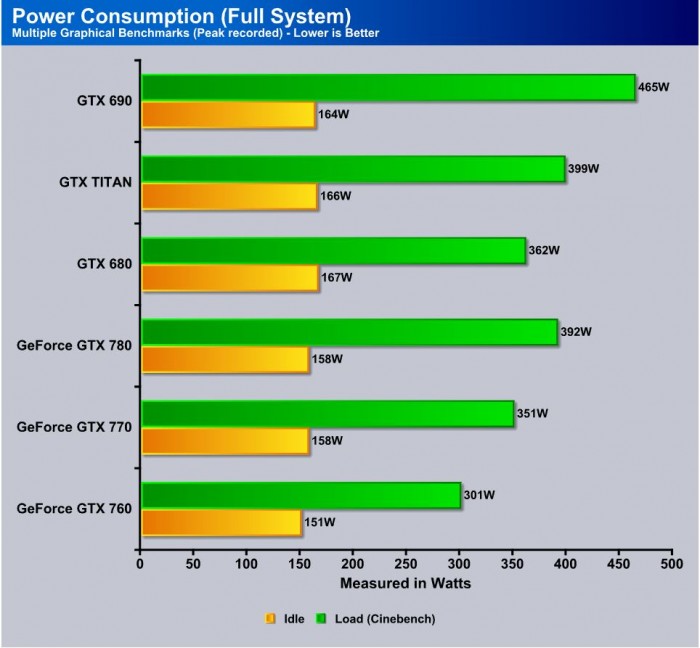 Here you can see the GTX 760 pulls similar idle power as the Kepler GPU is simply very power efficient at Idle, but under load it definitely pulls quite a lot less at 50W less than the GTX770. This is quite the saving, but then again it has less of a GPU to feed when loading up so it makes sense.

Following the 780 and 770 launch, the 760 slots itself in a comfortable space in a very popular price point which means this could be a midrange killer. Also don’t forget that the 660 Ti is not going away and therefore it just solidifies coverage of the mainstream market.

The overclocking of the GTX 760 is very good, almost hitting 1300MHz on the core and 6.8GHz on the memory. This should allow for a nice bump in any games that may be at the edge of performing well such as Metro 2033 which was right at the edge of averaging 30 FPS. Overclocking both the GPU and memory should net a very good performing card especially if your card gets around 1250 core like this one did. This card has great potential for an SLI setup–a 3-way setup with this card would still cost less than a GTX TITAN.

In the case of the 700 series we will say that the software advances are a big plus here as the GeForce experience is now out of BETA and on its way to official support. Adding to this the imminent Shadowplay feature, the aptly named GeForce Experience truly will open a whole new venue to how you experience your GPU and gaming platform. The auto optimization of games alone is huge, as who better to tune your GrForce card than the guys at Nvidia.

Supplementing the GeForce Experience is also the new Shadowplay feature, which gamers should see popping up in the coming months. It allows gameplay recording at HD quality while using the embedded H.264 encoder within the Kepler GPU to allow real-time encoding operations for smaller file sizes and less overall system load during gameplay. This is a really cool feature, as disk space is at a premium for those gamers running a smaller SSD. Having a fast drive to constantly write video data to is a must, so if you use a standard option such as FRAPS, you know how quickly those video files can eat up space.

The GTX 760 comes in at an MSRP of $249, with partner cards likely surfacing in that range and maybe a bit more for 4GB models. This places it in a real sweet spot for many gamers who are always looking for a good price/performance value from their graphics card.