NVIDIA continues to push out GPU’s in the 7xx-series and today it is time for the GTX760 , a mid-level card that will replace the GTX660 Ti. Zotac sent us their pre-overclocked Zotac GeForce 760 AMP! Edition-card, which turned out to be a good performer.

Just like the GTX680 and the GTX770 the GTX760 is based on the GK104 Kepler. The speeds have been trimmed down a bit so it fits the price point it is being sold at. 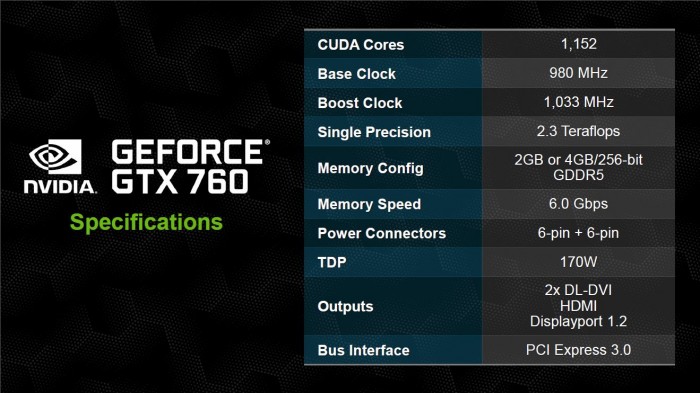 This is the specifications for the reference GTX760. Since this is a pre-overclocked AMP!-edition card it means Zotac has increased the base clock and memory speeds a bit.

We cover the full set of features of the GTX 760 in our main article so here is just a short summary.

Adaptive Temperature Controllers – stops the fan-speed to ramp up all the time making it quiet.

GPU Boost 2.0 – This allows you to set a thermal target, which then allows the card to run faster as it dynamically overclocks the card until it reaches the target temperature. This can be combined with increasing the voltage.

Adaptive V-Sync – Adaptive VSync is Nvidia’s way of providing a smooth game playability even when the frame rates falls below 60 fps. With the Adaptive VSync, the FPS no longer drops to the lower refresh rate that the monitor supports. Instead the VSync will automatically be turned on and off depending on the on the frame rate. When the FPS dips below 60Hz, VSync will be turned off and when the FPS recovers to 60 FPS, VSync will once again be enabled.

GeForce Experience Software – The GeForce Experience-software is now out of beta and is extra interesting for the GTX760 as it helps mid-level and low-level cards to get the best out of games without having to sacrifice to much visual fidelity. 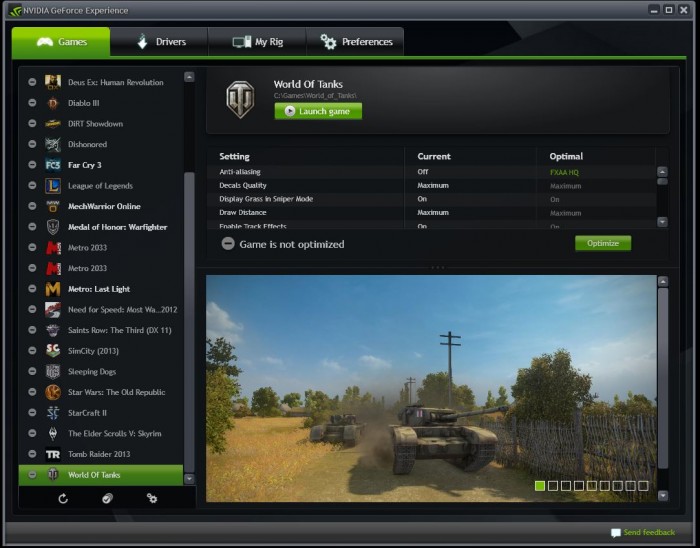 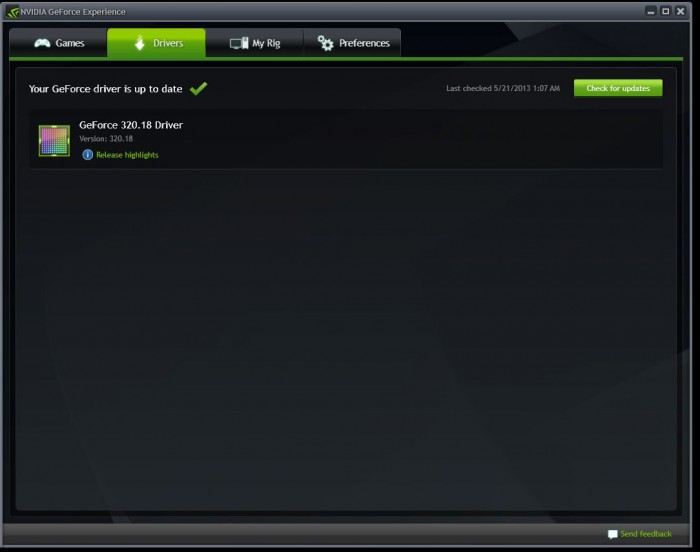 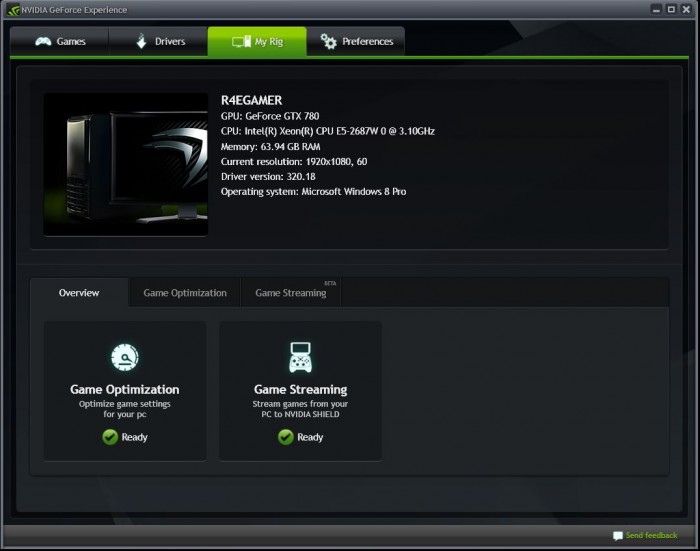 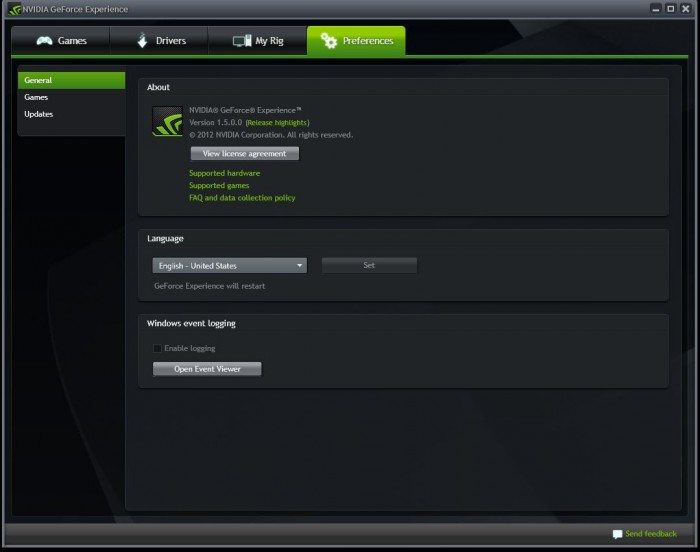 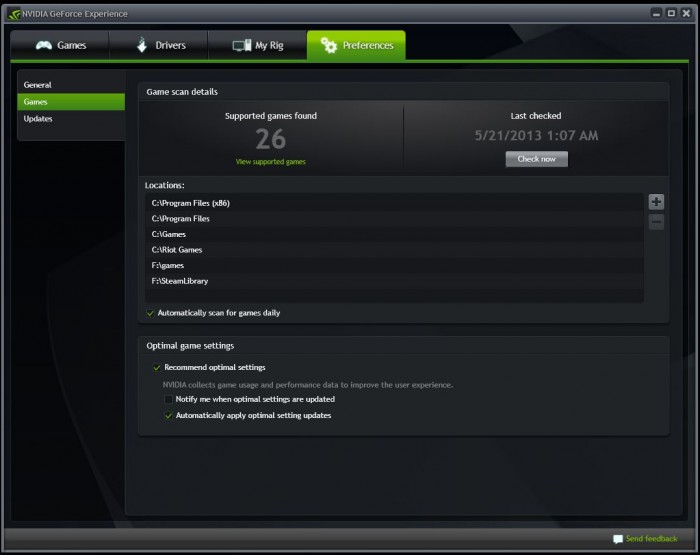 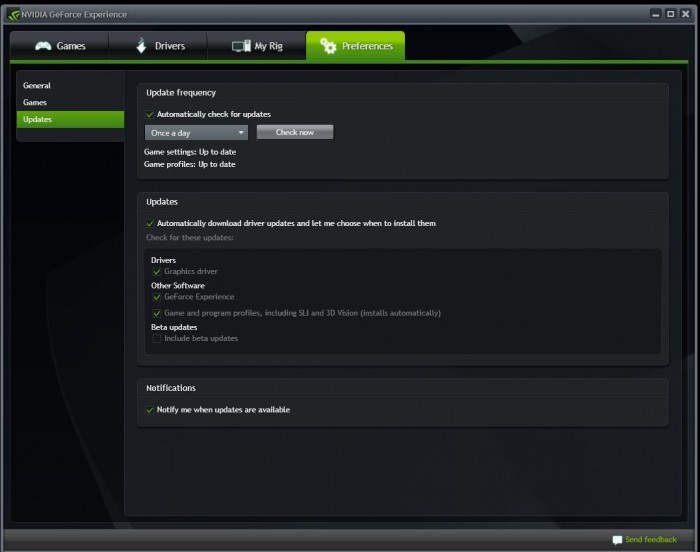 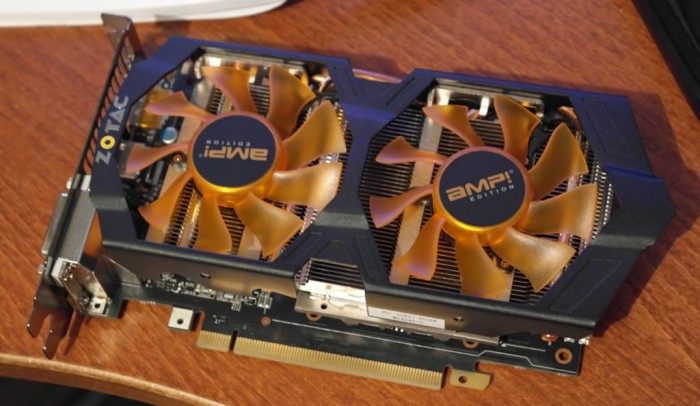 As with the Zotac GTX 770, this card does not use the reference cooler and instead uses Zotacs own special cooler which is supposed to make it quieter while allowing the card to run cool. The card is not long, especially when compared to the GTX Titan or GTX 780. 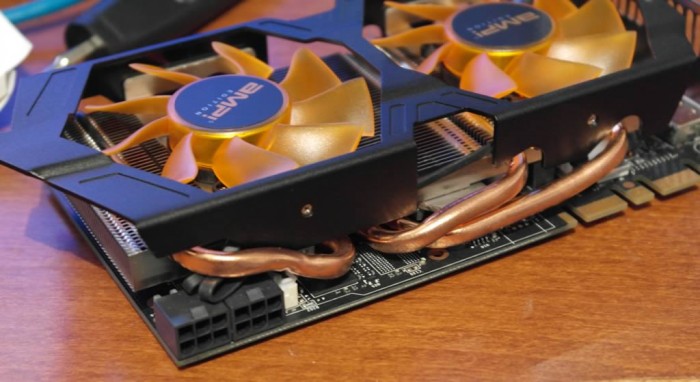 Here we see the heat-pipes that help cool the GPU and the rest of the chips. The card uses 2 6-pin PCI-express power connectors.

We get the same connectors as all the other cards: 1xDisplayPort and 1xHDMI, 2xDVI. 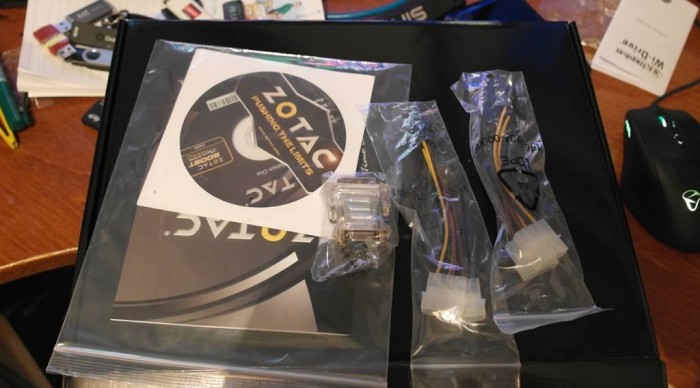 While Zotac includes games with their GTX Titan, GTX 780 and GTX 770 they have decided not to include anything with the GTX760. That is a bit of a disappointment but should keep the price down. What we get is a few adapters and a DVD with drivers, the Zotac overclocking software, Unigine Heaven benchmark, XBMC and Nero Kwikmedia.

We will use the following applications to benchmark the performance of the Zotac GeForce GTX 760 video card. 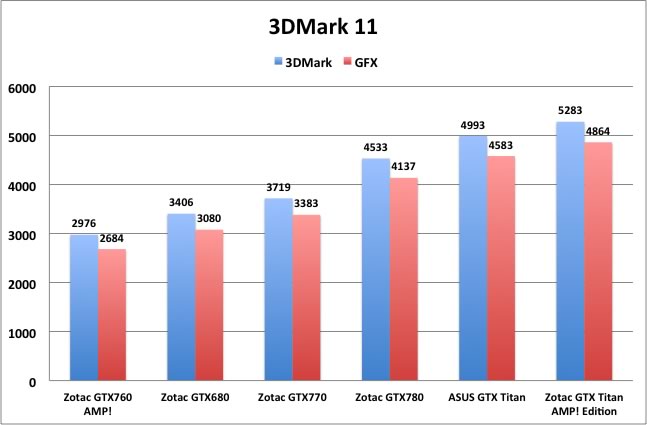 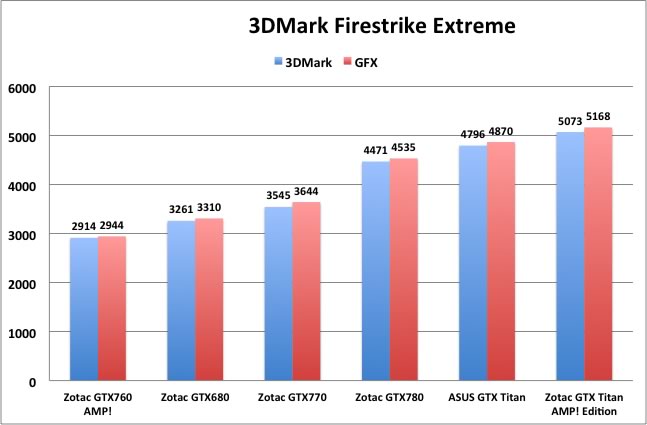 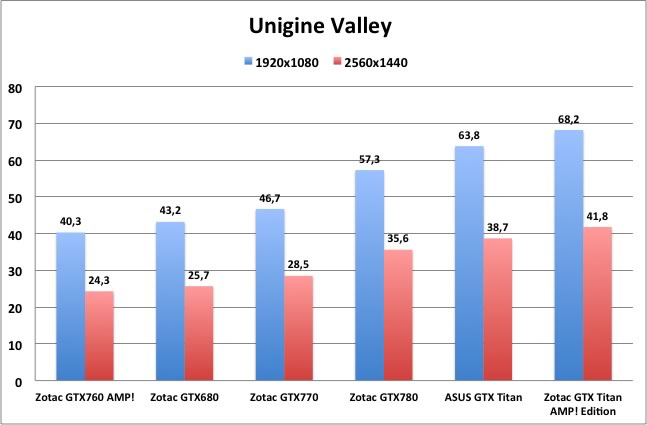 In the new Unigine Valley-benchmark the GTX770 scores just below the GTX680. 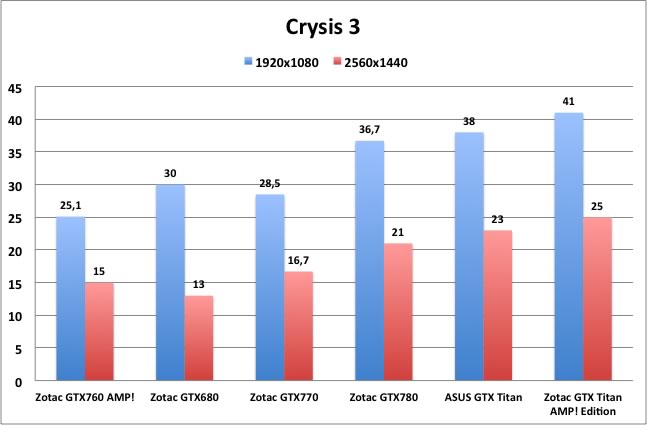 It would not be a Crysis-game if it did not tax the system a lot. As evident from the scores neither card really is playable at these settings and we would need to turn off/down a few settings to use it in the game. This is a good game to use the GeForce Experience Software with, something we will look at a bit later in this review. 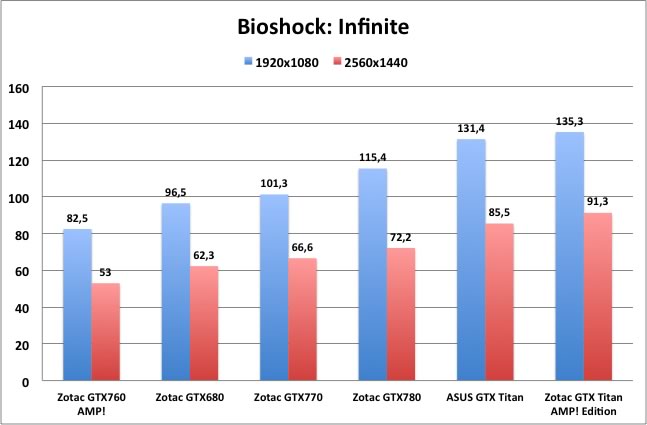 While the GTX760 is about 15% slower than a GTX680 it still produces very good framerates in this new game.

We talked earlier in this review about the GeForce Experience Software that helps the user to set the optimal settings in a game depending on what card they have. Considering that we see that in some games the Zotac GeForce GTX760 AMP! struggles to produce playable framerates at the ultra high settings that we use we felt that it would be a perfect time to see what the program would suggest for changes to Crysis 3 and Bioshock:Infinite.

In Bioshock Infinite the software actually did not think we needed to change anything and if we look at the scores it is pretty obvious why. Sure, the card is slower than the other cards we have tested but with an average framerate of 53 fps at 2560×1440 it feels pretty unnecessary to start lowering the fidelity of the graphics.

In Crysis 3 though things are different. With an average framerate of 25 fps at 1920×1080 and 15 fps at 2560×1440 there is a lot of room for improvement. We let the program look up the best settings for the game. What the program suggested was to lower Anti-aliasing from 8x SMAA high to 1x SMAA low and to lower some of the other settings like shadows from very high to medium or high instead. Said and done we then ran the same benchmark. 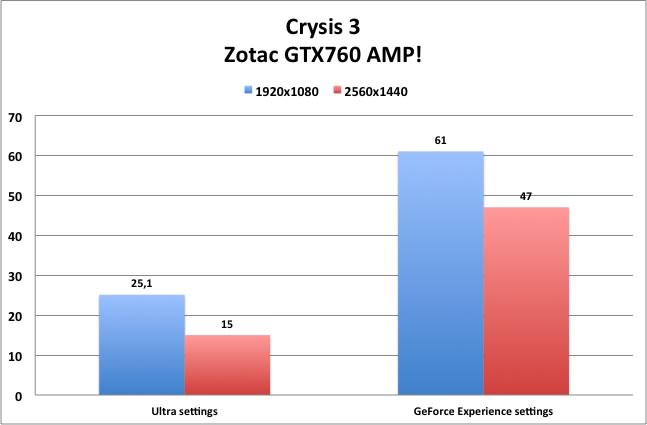 Just by changing a few settings we go from unplayable to great framerates. And that while still getting superb image quality.

Overclocking the GTX 760 is just as weird as the GTX 760, the GTX 770 and the GTX Titan. Since the card already is overclocking itself dynamically via NVIDIA Boost 2 you never are sure what you will end up with when setting a target clock in MSI Afterburner or Zotac Firestorm. We did a quick test to overclock this card and increased the target temperature to around 90C and allowed the card to use 105% if the power draw.

We had some issues overclocking the card. We could increase the base clock to 1200 MHz which is a 10% overclock but we could not increase the memory clock at all. And going over 1200 MHz gave us a “Driver not responding”-error in the newest 3DMark. It probably is a bit unfair to complain that we could not overclock the card even further since it already is overclocked out of the box but it always is nice when we can squeeze a bit more performance from the card. The 10% overclock only gave u about 5% higher score in 3Dmark so it might not be worth it anyway.

We have not found a price for the Zotac GTX 760 AMP! Edition in the US yet but looking at the prices in Sweden it looks like it should be similar to the other GTX760 cards which means at around $250. This is a great price for a mid-level card that is already overclocked. The only thin we really can complain about is the fact that it does not come with either the Assassins Creed or Splinter Cell-bundle that we see with Zotacs better cards.