This packaging is something we have seen before. This equestrian warrior design has been used for a while, though we’re not exactly sure who the character is supposed to be. The rear of the box shows some key specs along with some minor detailing of the key features such as the DirectCU II thermal and VGA Hotwire functions. 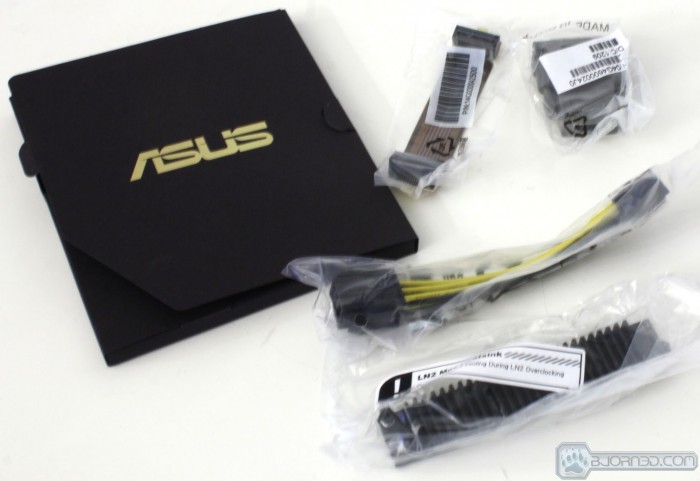 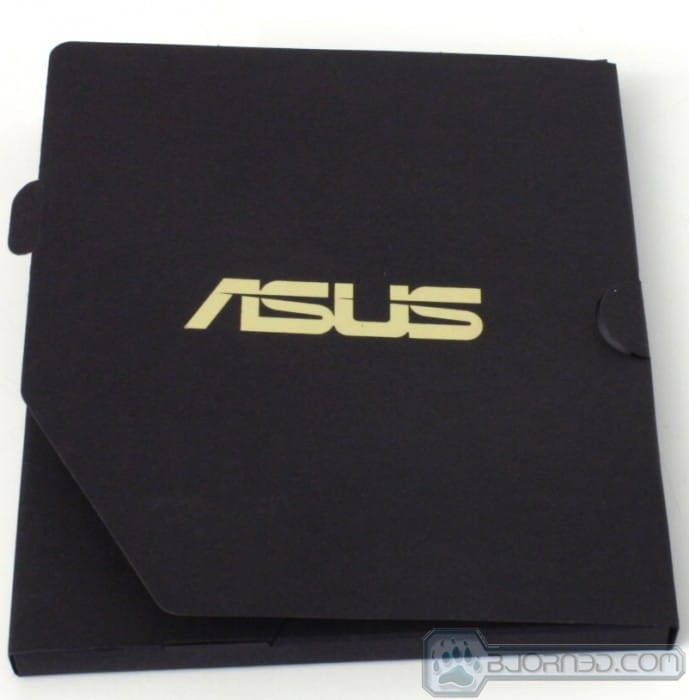 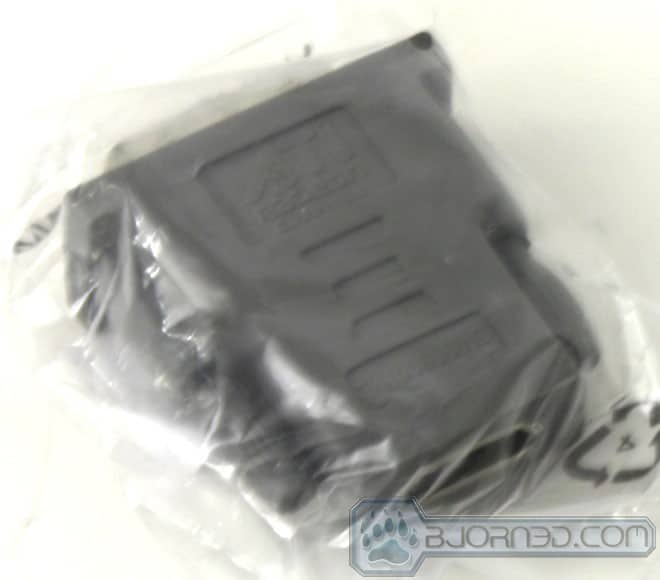 Here is what you get once you remove the GPU and foam and expose the accessories section.

The accessory package is nice and covers not just connectivity but also the VRM heatsink should the card be moved to a benchmarking usage and extreme cooling is employed. This is above what some manufacturers offer in their high end cards as it allows cooling of the VRM by a properly sized cooling fin array, while in other cases you would need to figure out a way to cool the VRM by yourself.

Here we see the front and rear of the card, and you can clearly see that the card is massive. It is definitely three slots thick and even the pictures don’t really convey exactly how big this card is. The large dual front fans are used to blast cooling air through the DCII fin arrays and keep the GPU and other components below it nice and cool. The backplate helps stiffen the card, and also helps dissipate heat as almost a heatsink would.

The I/O side has enough connectors to allow for Eyefinity 6. The card offers four DisplayPorts and dual DVI connectors. This is plenty of connectivity for any display setup we would use, and most people use 1-3 displays, so offering up to 6 is rather extreme. 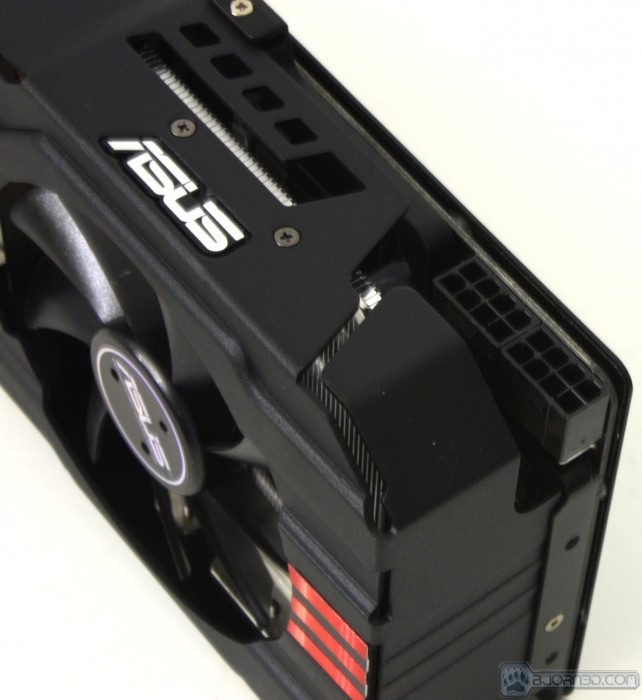 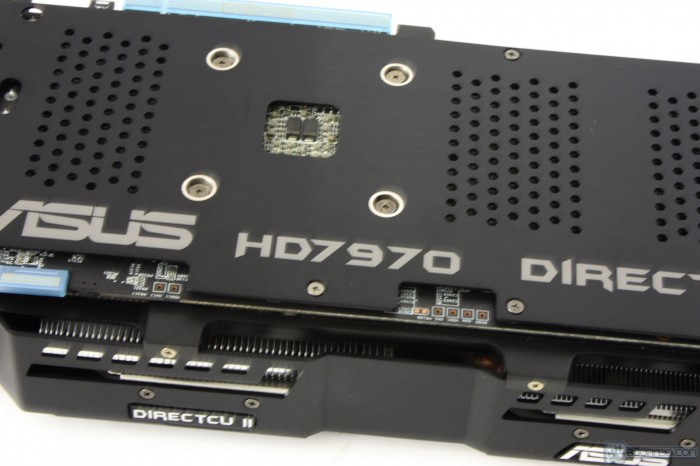 The power end is fed by dual 8 pin PCI-E power connectors which means this card has more than enough available power for some very strong loading conditions at extreme clocks. Here at the rear in the middle of the backplate right behind the GPU is a small opening exposing the SAP Caps which provide the extra little jump the GPU may need when load suddenly spikes up which allows the VRM to respond without a vdrop or sudden unstable voltage condition. 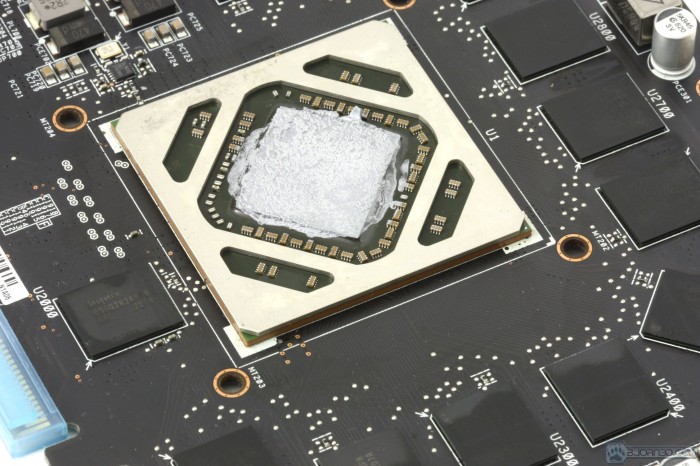 The heatsink comes off with the complete bracket assembly and all rather easy by just removing all of the screws (Dont forget the 4 in the IO area) and it will simply come off the card. The backplate is also retained by the same screws so it will fall or lift away as well exposing the complete PCB. The GPU is a HF 7970 model Tahiti GPU which was specially sorted for its ability to attain (and retain) high clockspeeds. 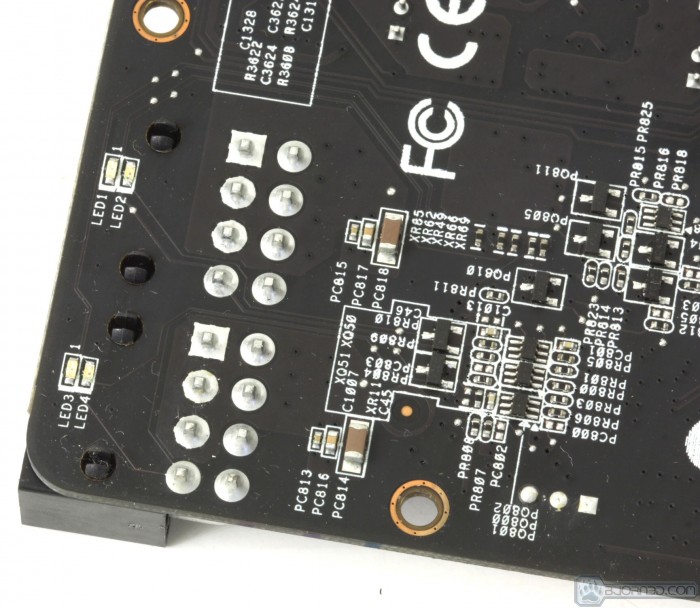 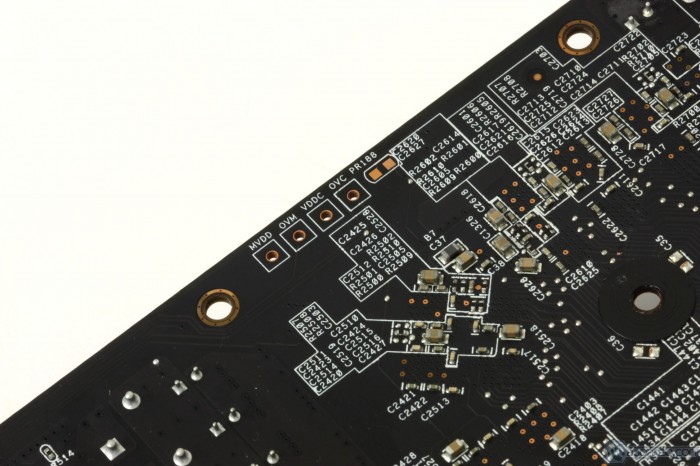 Here you can see the dual LEDs which show power status to the two 8 Pin PCI-E connectors  Also further up the PCB edge you can see the VGA Hotwire mod points which is where we solder the necessary wires in place to allow the hardware level voltage monitoring and tweaking necessary for extreme overclocking of the card. Also near the far side we find the vPLL adjustment along with the CrossFire bridge and the toggle switch for selection of the 2 physical BIOS chips on the card. 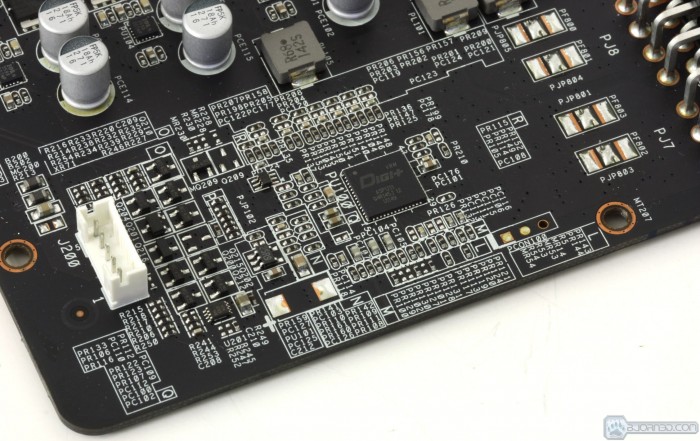 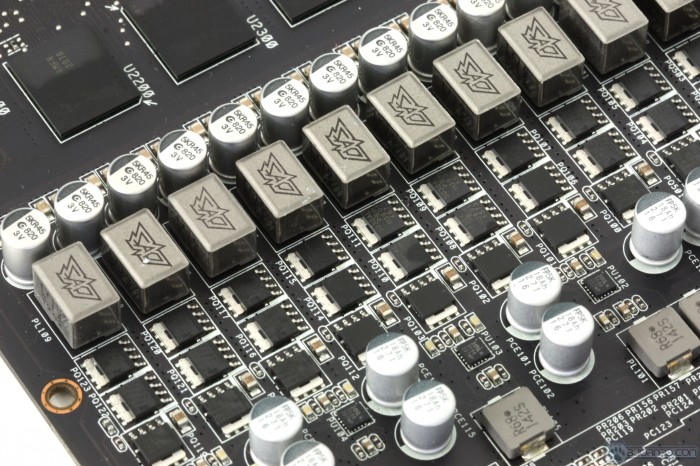 After looking over all of that we move to the final section which is the VRM. The VRM is pushed by our good friend the DIGI+ controller which has been proven time and time again to be a very capable performer with its ability to balance both extreme performance with great efficiency. The DIGI+ controller in this case is pushing a 12 Phase VRM which shoudl be more than enough to beat up soem monster clocks especially in an extreme cooling condition.