ASUS has a wide range of products, from hardware to routers and audio solutions. Today though, we’re taking a look at one of ASUS’ premier products: the ASUS HD 7970 DirectCU II TOP edition card. Keep reading what this beast of a card has to offer!

The ASUS HD 7970 DirectCU II TOP edition is basically a very beefed up version of the HD 7970, similar to the review we did of the GTX 680 DCII TOP. In these versions, ASUS essentially takes the GPU and builds a whole new card around it. This allows them to take advantage of the ASUS VRM engineering and performance designs to make the card just that much better. By stacking a DirectCU II cooler on top of this, they can create an amazing card. The TOP also has some extra advantages going for it, such as specially screened GPUs pushed at a high overclock to ensure you get something special right out of the box. 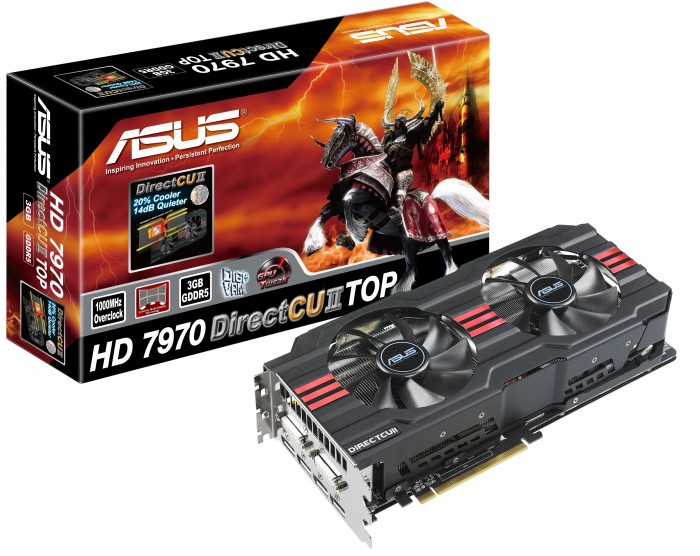 The ASUS  HD 7970 DirectCU II TOP came to market at around $449.99 when you could find it but these cards simply are not available from scouring online stores for available stock. One thing to note is that ASUS does offer a model with the exact same features as the TOP but with a slightly lower clock at 925MHz GPU clock for only $434.99 available on newegg presently which means if you dont need the upper echelon screening of the TOP model you can still find it readily available with an identical card for ten dollars less. 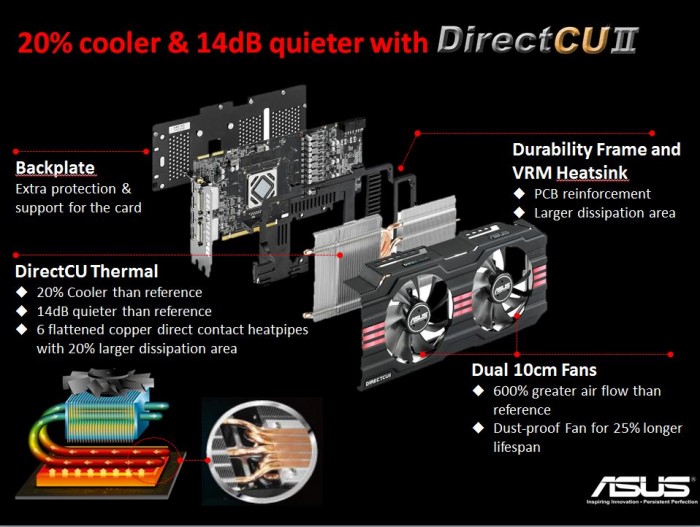 Here we see a overview of the many key features that make a DirectCU II TOP Edition cards sop special. Well at least from the cooler point of view along with showing  breakdown of how the whole DirectCU II system goes together. The breakdown really puts into perspective how much goes into just the engineering of the DirectCU II cooler and how it all integrates into making one functional and flat out awesome card.

ASUS has great pride in the components they infuse into their graphics offerings very much like the motherboards we have covered previously. ASUS has whats called SAP or Super Alloy Power which covers the components in the very VRM we are discussing. The components are hand picked for quality and performance based around not only power delivery but efficiency as well. The components in the SAP solution are super durable for a rated lifespan of up to 2.5x what reference cards would offer and also with the DIGI+ controller your talking ultimate precision which means better voltage stability, better overclocking potential and overall better power efficiency clock for clock. The SAP power components official rating for the SAP implementation is 45A per phase for 360A total power capability on the GPU alone whereas the reference you would have a max power handling of 300A, likewise memory tops out at 90A for the DCII variant which is 33% higher than the reference at 60A.  This at the end of the day means that the power handling and to another token the overclocking headroom can be seen as quite a bit higher or even less load on components since the load on components will be even further away from their maximum loading limit. 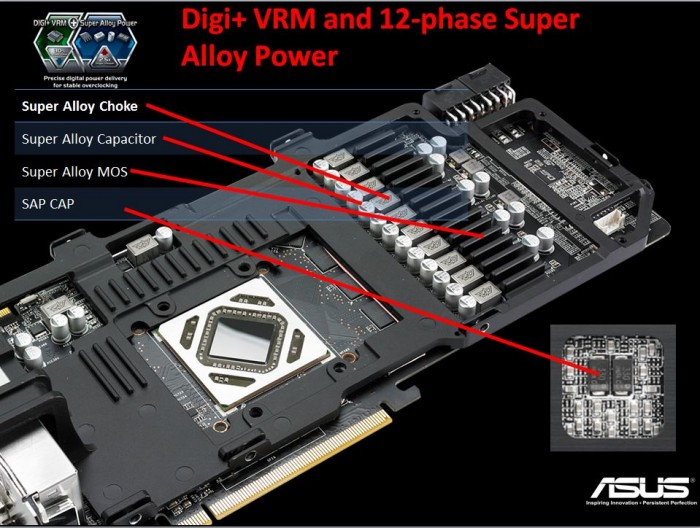 Here we see the VRM Chokes, MOSFET/driver assemblies and the solid state caps which make up the SAP components, or to simplify, the super strong and efficient VRM. also here we see the SAP CAP or flat style caps at the rear side of the GPU location. These are placed to allow a quick boost of power to the GPU should a heavy load occur which will help with any possible voltage droops from a quick heavy load. 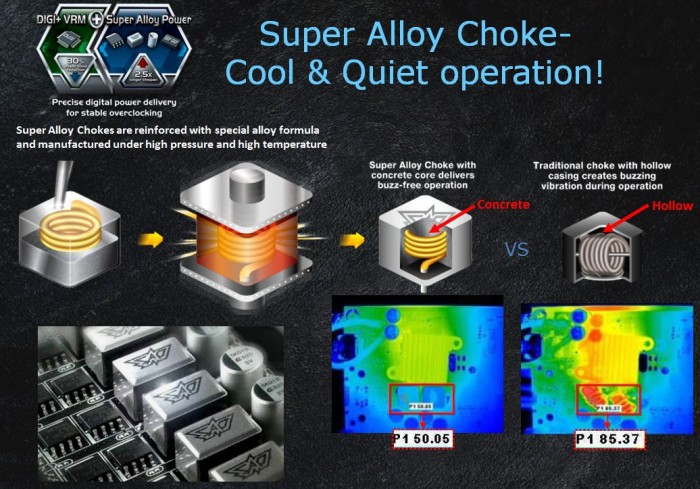 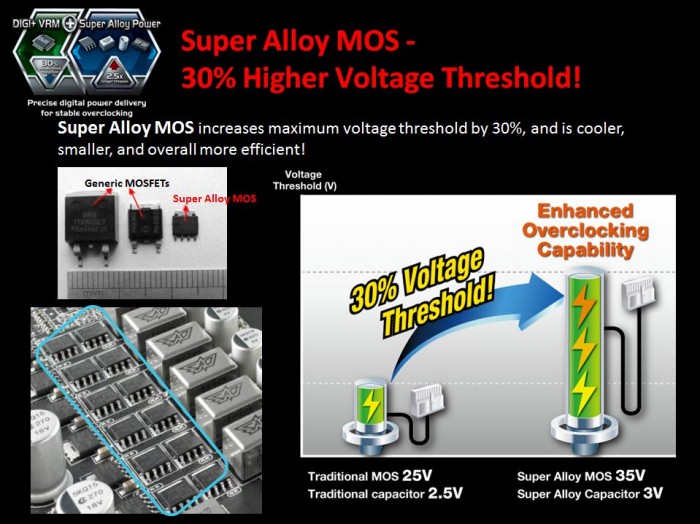 Here ASUS shows off its SAP selection for mosfet components. These are designed to not only be more efficient but also have a higher power handling capability which allows them to have extra head room for overclocking should you really want to push the limit. Also note the small package design of the SAP component as it is much smaller than the standard or generic mosfets used on some standard or reference model cards. This allows for a larger VRM design to fit into a smaller space so taht you can pack more punch without effecting the tight real estate within the chassis. 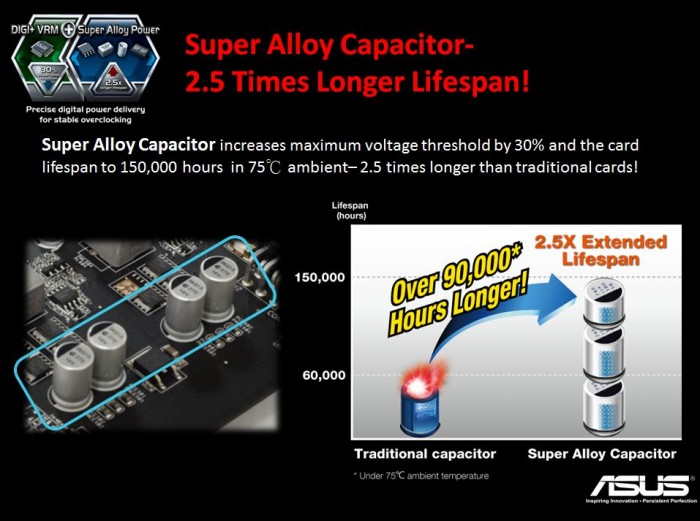 The SAP Solid state cap selection are japanese units with a much higher MTBF than what you may see on other designs. These units are designed to have a very high expected lifetime which allows users to rest assured that in their gaming rig these components should have a nice happy life with a evry low chance of failure for quite a long time. For those of us to like to throttle our cards and really put the squeeze on them, this means we have the capability built in as the components are solid and reliable and ready to take a pounding. 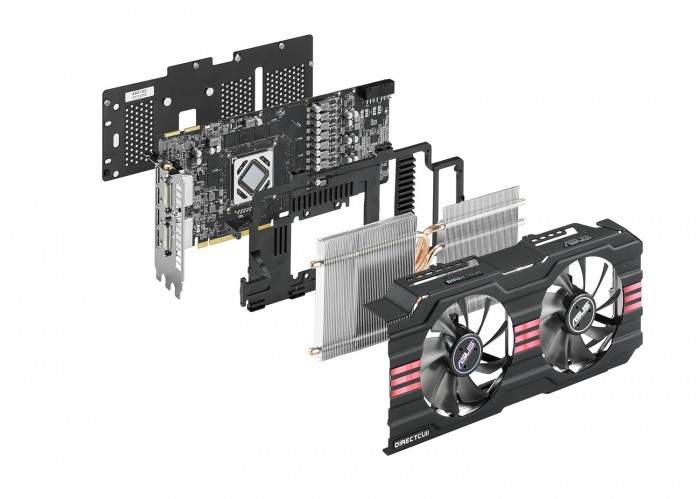 AS you see above the heatpipes on this cooler are massive and they are configured in such a way that they maximize the cooling efficiency of the fan airflow from the DirectCU II Cooler.

ASUS Introduced the VGA Hotwire functionality quite some time ago on the Rampage IV Extreme. It is designed to make hardware level voltage monitoring and adjustment much easier than what has been seen previously with usage of soldered trimmers. 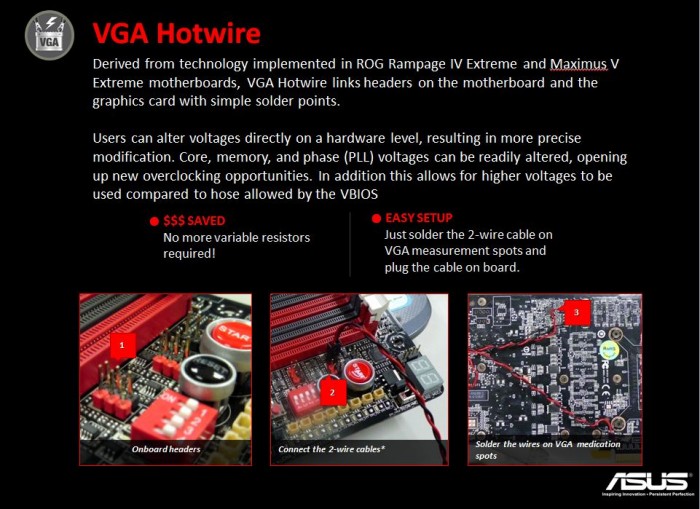 ASUS places pin headers directly on the motherboard which allows simple plug in connectivity for the wiring going to the GPU. There are three connectivity points for three different voltages that can be monitored and adjusted.

This allows pretty much the whole gamut of necessary adjustments for those looking to truly push the limits past what software can accomplish on their GPU without the hassle of trying to adjust trimmers with a screwdriver. 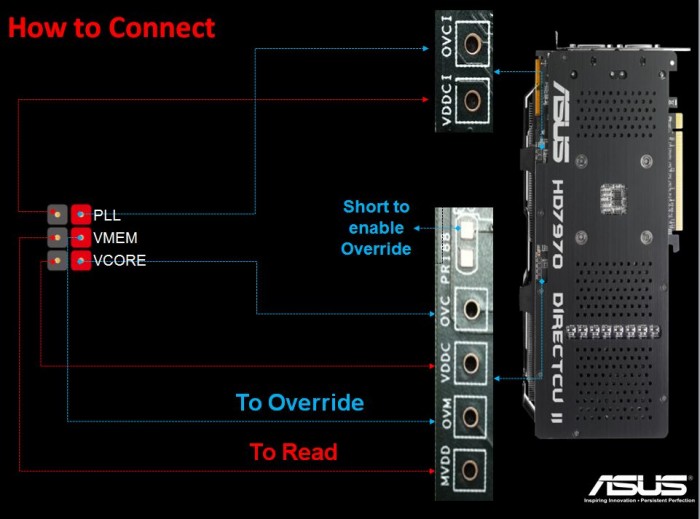 Here we see the attachment points for the VGA Hotwire on the HD 7970 DirectCU II card. These require some soldering on the card of the wires through the holes to allow connectivity of the VGA Hotwire feature. Also once those are connected there are 2 solder pads just next to the OVC connection which need to be shorted to enable the GPU Hotwire adjustment function.

NOTE: The VGA Hotwire function is a manual hardware level voltage control and is only recommended for advanced users, and usage of the function via soldering on the card most definitely will void any applicable warranties. 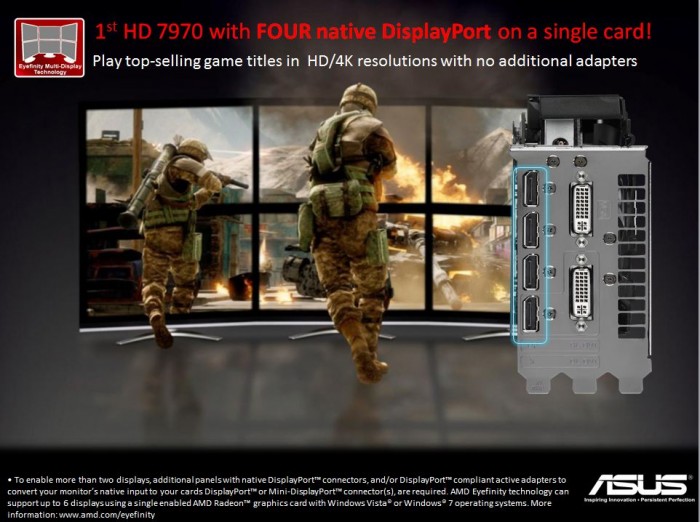 The HD 7970 DirectCU II TOP edition card comes with dual DVI and quad DisplayPort connections for full Eyefinity 6 support which means from this single card you can have a massive panel array just waiting to blast you games to you in an insane surround or large scale environment.

You would think that by now everyone would know that one of the number one killer of a fan is the dirt and dust it comes into contact with. Many fans simply are not sealed in such a way that it can keep dust out and in many cases they are not sealed at all and you can see the sensitive winding area clearly exposed just by looking at the gap. 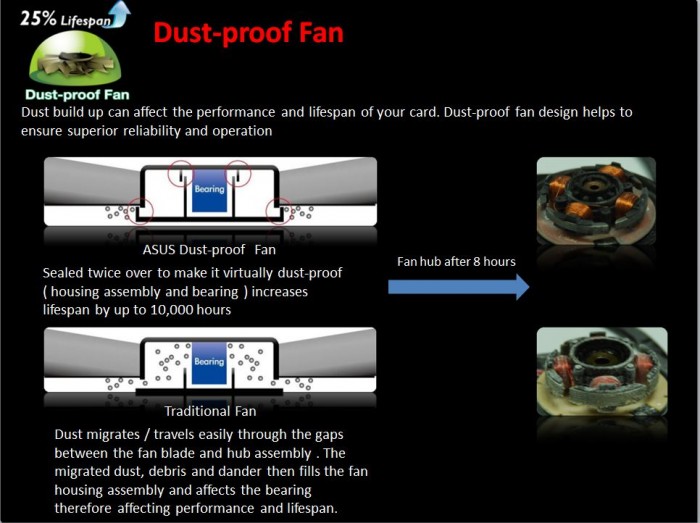 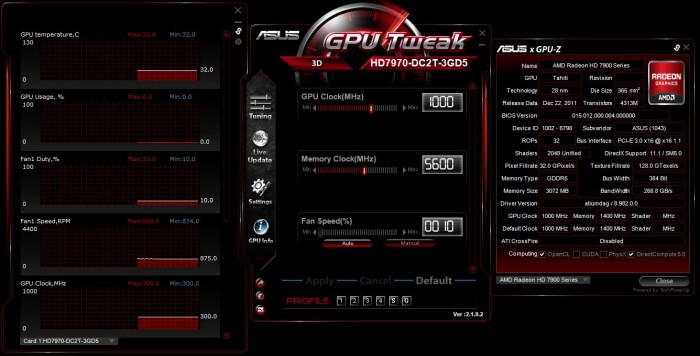 One really cool feature is that there are status LED’s on each PCI-E connector and these help you recognize that power is actively being sent to each connector of the card. 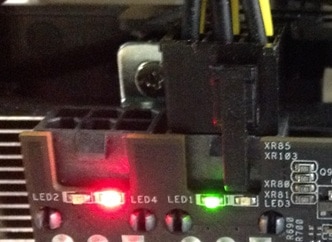