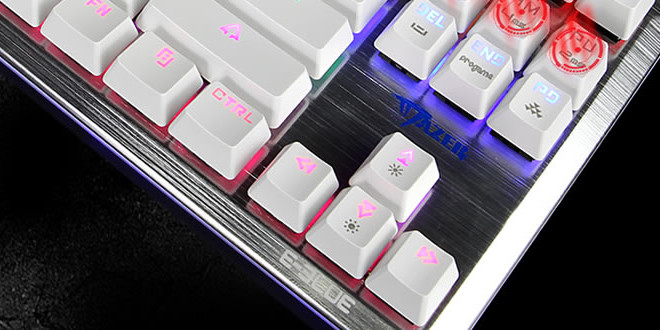 E-Blue is company that might be as well know as Razer or Logitech but sells a lot of gaming peripherals like gaming mice, keyboards and even gaming chairs. We got the opportunity to test on of their small mechanical gaming keyboards; the E-Blue Mazer K727 Mechanical Keyboard. This is a small compact keyboard that comes with a choice of 4 different mechanical switches: red, black, brown and cyan and backlit keys that can be configured in many ways.

The specifications of the E-Blue Mazer K727 Mechanical Gaming Keyboard are as follows:

We actually do not know if this is Cherry MX switches but the image they E-Blue show on their website seems to show Cherry MX-switches so we guess that is what they are (or something similar). Red Cherry MX-switches are not tactile switches. Instead they are linear switches which are not so “clicky” which is what we are seeing.

Diving into the features there are a few nice features we get with the keyboard while missing others.

In fact, saying “backlit” keys is an understatement since you can do a lot with the lighting of the keys. While not a true RGB-keyboard where you can change the color of each key the keyboard comes with different colors on each row. Red at the top, orange for the numbers-row, blue for the qwerty-row, then green and purple and lastly pink for the space-bar row. In addition to these colors you also get a light blue glow from the bottom of the keyboard.

We will go into this a bit later in the review but there is a bunch of ways you can set up the lighting, some useful and some … not so useful but quite cool.

Cheaper keyboards and non-gaming keyboards sometimes do not allow you to press every key-combination without one or more keys not registering. This of course is a disaster if it is the “wrong” combination while you are gaming. The E-Blue Mazer K727 Mechanical Gaming Keyboard have no such issues and in our testing every key worked well even when we pressed them all at one time (with the help of some younger Bjorn3D-trainees).

The keys are raised which gives them a floating feeling. We’ve seen this on for example Corsairs gaming keyboards and it gives the keyboard a nice look and feeling when pressing the keys.

Amongst the features missing is any kind of macro progrability for the keys. Some of your keys can open things like music player or home page but are only using the settings in your OS. 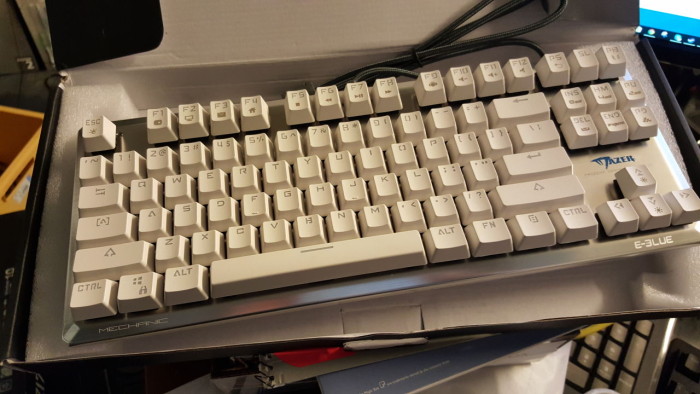 The keyboard is available in black or white and we received the white version. This is a small and compact keyboard, very similar to for example the compact K65 Corsair keyboard. It is a so called tenkeyless keyboard which means it does not have the numpad to the right. This makes it compact enough to fit in cramped spaces and also being easier to take with you to a LAN-event. 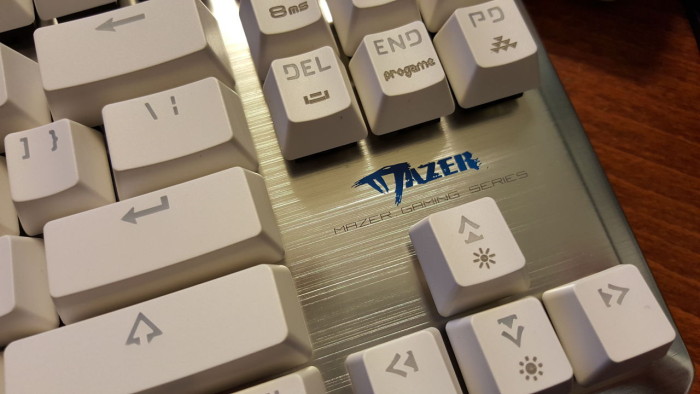 The top of the keyboard has a metal finish which actually looks nicer than it might sound. It gives the keyboard a robust and luxurious feel. 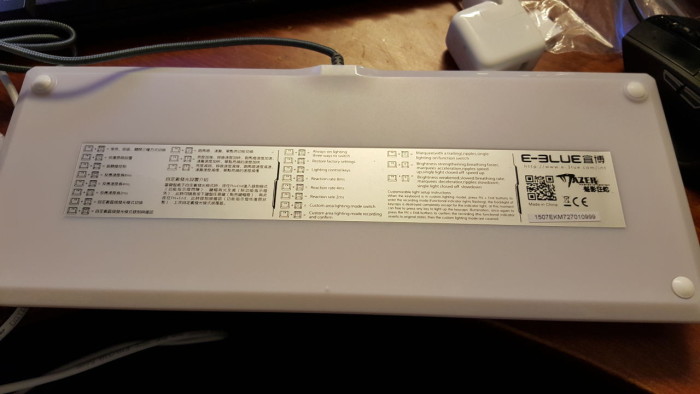 The bottom is plastic and the reason is that that the entire bottom lights up blue when you use the keyboard (this can be turned off of course). One big negative is that there are not stands to be raised so the back of the keyboard can be raised up a bit while typing. 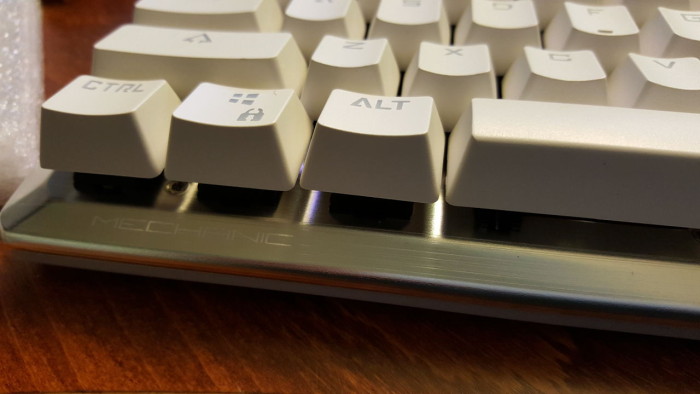 This is an example of the “floating keycaps”. 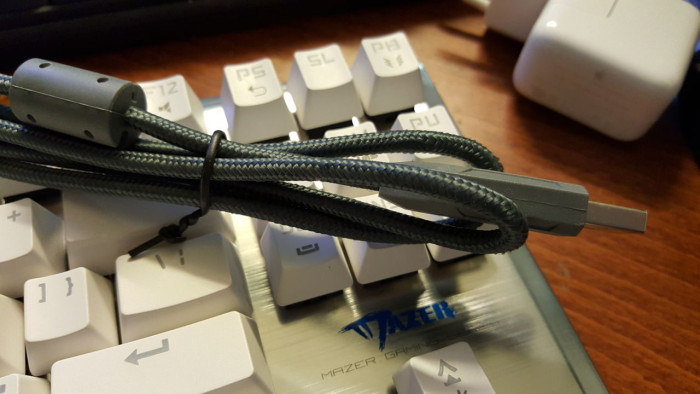 A regular braided cable (1.8 m) is included. Unfortunately there are no USB-passthrough on the keyboard.

Show me the light 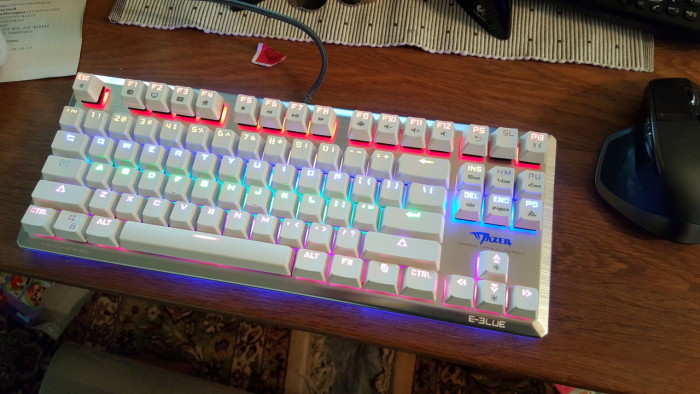 One feature of the  E-Blue Mazer K727 Mechanical Gaming Keyboard is the way you can configure the lighting. While the keys cannot change color you can set the light up a lot of ways. We’ve done a small video of this.

There are several ways you can let the light work. You can for example make it light up the keys like a marquee, let each key light up on keypress or why not the psychedelic effect of having light “ripple” out from the key you are pressing (see the video for this weird (setting). You can also program the keys so only certain keys are lighted up. E-Blue already have a profile for lighting up the WASD + Spacebar but you can do simply whatever you want and it is quite easy. The lights can also be set to a few different brightness levels.

We had several people commenting the keyboard when walking by, something which never has happened. The multi-color lighting is sure to attract attention. Even more important it actually does a great job in making it easier to work in the evening or night in a darker room. The keyboard was especially a hit among children which said it looked like a “Christmas tree”.

It doesn’t really matter if a keyboard looks good or has cool features if it is not nice to work with. In our case we choose to use this keyboard for a couple of weeks both for gaming but also coding and writing.

This is a really nice keyboard. The feel of the keys are in our opinion really good and we like that the sound is not too loud, something that is useful when typing in the evening when everyone else is sleeping. We also had no issues to get our typing speed up to what we are used to with other keyboards. The light takes a bit to get used to but after a while we really appreciated the ability to have some light in the evening and better see the keys.

Gaming also worked well. You can easily turn off the Windows key so it doesn’t affect your gaming session.

The not so good

We did miss the ability to raise the back of the keyboard up a bit to make it a bit more comfortable to type on. Overall it was ok but for sessions several hours long we got a bit tired in our hands.

The Return-key also was not our favorite. Comparing it to other keyboards it is much smaller while the key just above it is wider than the other keys. We would have preferred it to look like on other keyboards, L-shaped. What basically happened for quite some time before we started to adjust was that we wanted to press Return and instead pressed the button above.

Even with the minor issue of the return key and the missing option of raising the keyboard this is actually a really nice keyboard. The keyboard can be bought from www.gearbest.com for $70 and this compares well to other similar keyboards from more know brands, especially since we get full multi-color backlighting. It has a nice solid feel to it and does not fell cheap at all. We’ve used it both for gaming and regular coding and writing and found it both to be confortable and accurate. While the ability to raise the keyboard up a bit as well as a bigger return-key would have been nice it still did not stop us to be very productive with the  E-Blue Mazer K727 Mechanical Gaming Keyboard.