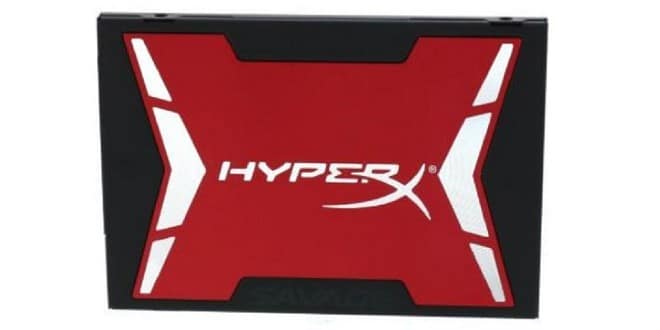 For our Platter Drive VS SSD Shootout, we ran each test 3 times then threw out the low and high score and kept the median result. That median result is reported here.

Our laptop was upgraded to 8GB DDR3 1333 and we pulled the 750GB HD and replaced it with a faster Seagate 7200 RPM 500GB model (ST9500420AS) which is a model that they use in this line of laptops and a very common laptop hard drive. We have several lying around the lab.

Much to our surprise, no information can be found regarding the Toshiba’s SATA controller and the ST9500420AS is a SATA II 3Gbps drive. It’s not our fault that laptop and desktop vendors have been using inexpensive parts and charging premium prices for decades now. If you open any HP, Dell or other commercially available desktop you’ll often find a PSU worth about $15 and a ticking timebomb ready to kill your system; so it’s not surprising to find a SATA II 3Gbps platter HD in a laptop.

Since this is a portable program, it is important to mention that it doesn’t leave any traces in the Windows Registry. You can copy it on any USB flash drive or other device, and take it with you whenever you need to test the performance of your SSD or hard disk drive on the move. 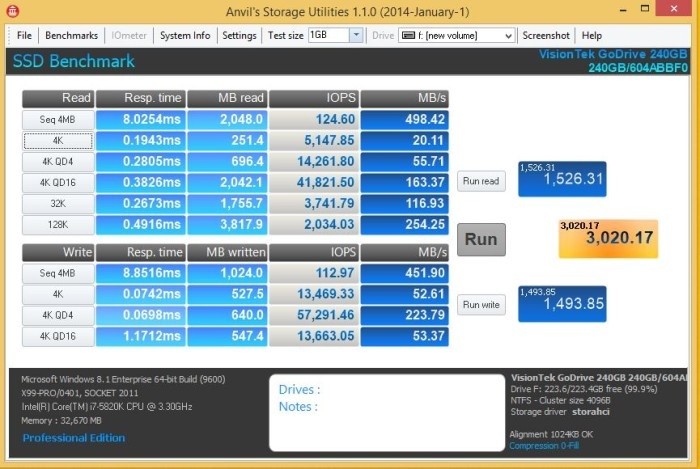 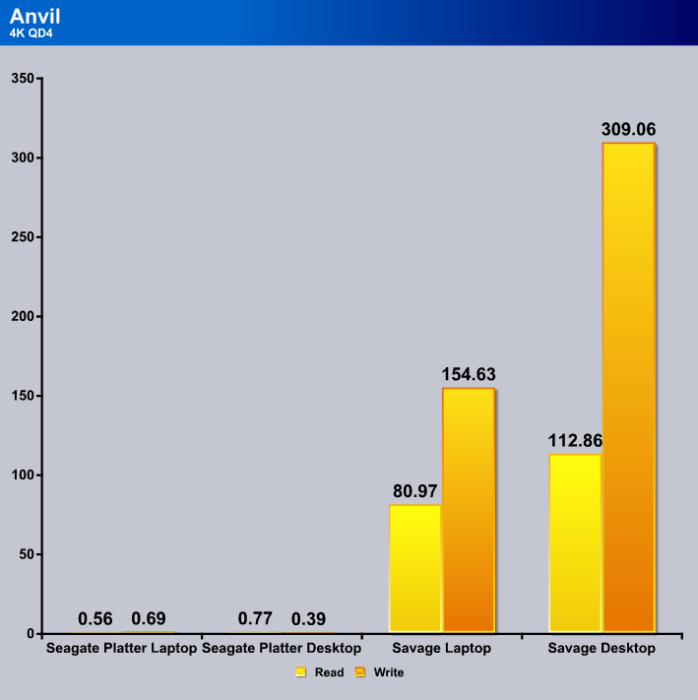 Early results are showing that the Kingston Savage 480GB SSD is hundreds of times faster in the 4K QD4 test. 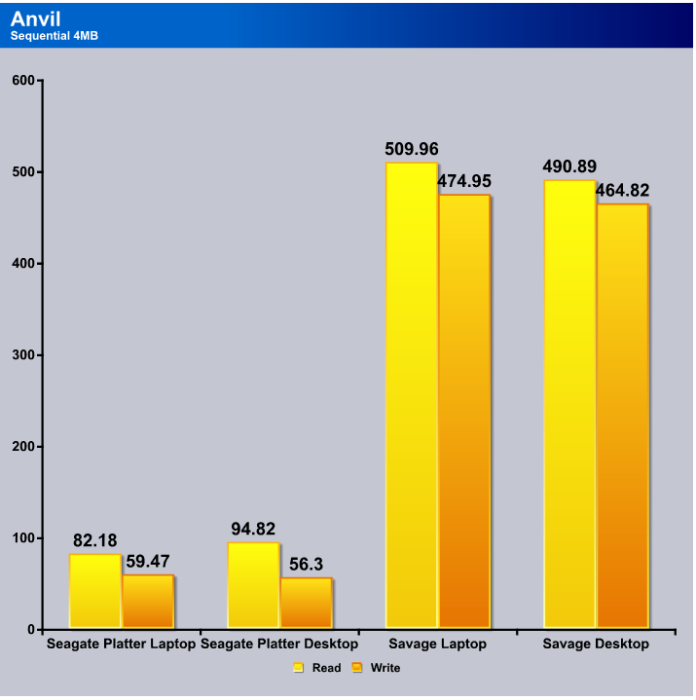 The sequential test in Anvil shows the Seagate drive hitting 82.18MB/s Read and 59.47 MB/s Write, which aren’t bad numbers for laptop platter drives. Hook the Seagate up to the desktop and we got 94.82MB/s Read and 56.3 MB/s Write. Looking at the HyperX Savage 480GB SSD in the laptop we hit a whopping 509.96MB/s Read and 474.95 MB/s Write. Platter drives are more suited to sequential reads and writes than they are for short 4K writes and the test bears that out to be true, but they just can’t keep up with the SSD running 5x faster.

Now ask yourself the obvious question: “Why does a laptop manufacturer use a SATA II 3Gbps platter drive in a SATA 6G laptop?” Because the platter drive has no hope of exceeding the speed limit of SATA II, but they smarten up and put a SATA III 6Gbps controller in there in case you upgraded to a SSD. Our question would be, with dropping SSD prices, why aren’t laptop manufacturers putting SSDs in their laptops by default? 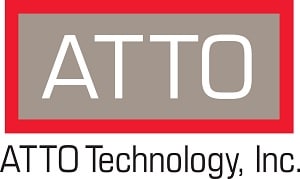 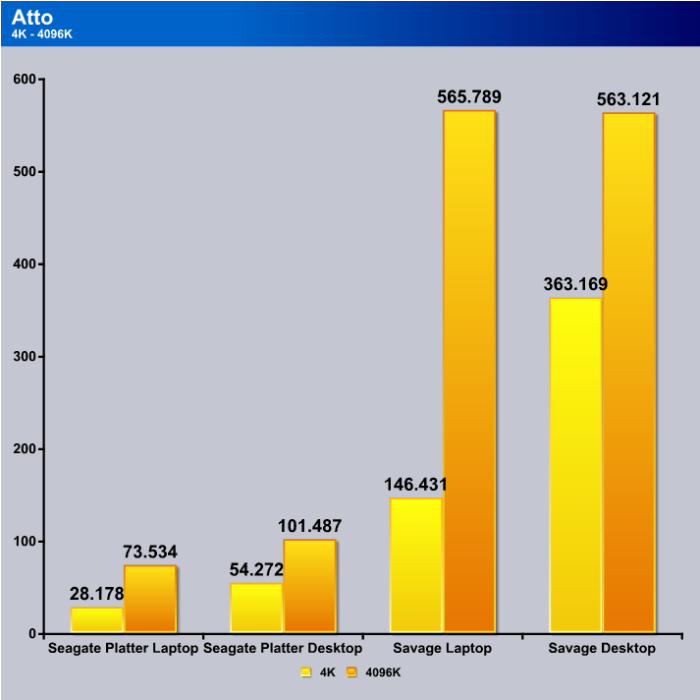 Atto is used by almost all HD manufacturers to give the speed of their drives because it’s reliable and produces reproducible results. The Seagate platter drive topped out at 101.487MB/s and that was in the 4096K test in the desktop. On the laptop it topped out at 73.534MB/s and again that was on Read. The Write numbers, well lets just say they are lower than the Read numbers. Switch out to the Kingston HyperX Savage, and on the 4K test in the laptop it scores 146.431MB/s and switch to the 4096K test and it hits 565.789 MB/s Read and 363.169 Write. 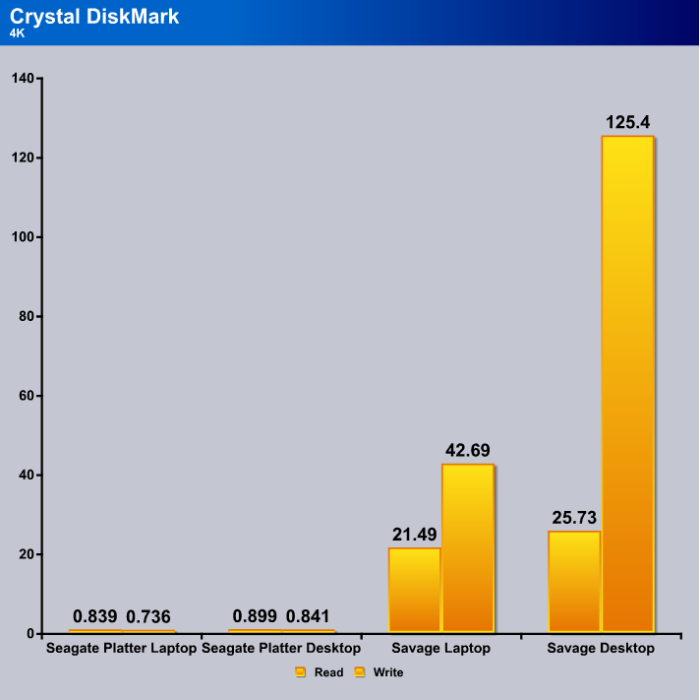 The 4k test in Crystal DiskMark is brutal on every type of drive, and the platter drive couldn’t even provide 1MB/s, while the HyperX Savage 480 GB drive struggled in the laptop. The Savage hit 21.49MB/s in the laptop on Read, and it bumped up a little on Write and hit 42.69MB/s. In the desktop the Savage did a little better, and on Write it hit 25.73MB/s and Write it hit 125.4MB/s. 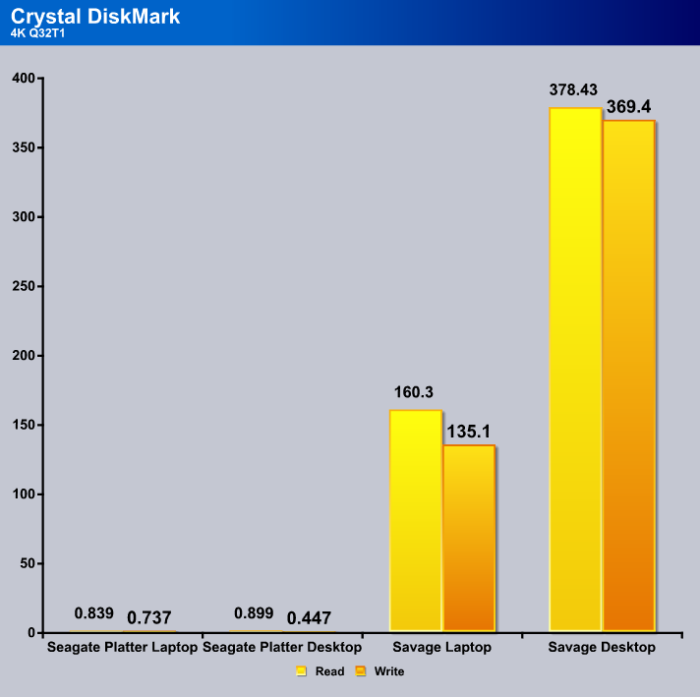 The 4KQ32T1 test sees the Seagate platter drive at below 1MB/s in this test, while the Kingston Savage hits 160.3MB/s Write and 135.1MB/s Read in the laptop. Hooked to the desktop the Savage SSD hits 378.43MB/s Read and 369.4MB/s Write, so we are seeing some differences between the desktop’s controller and the laptop’s controller. We know that the laptop controller has to be SATA III 6Gbps because we’ve seen speeds that exceed SATA II’s 3Gbps speed limit come from the controller. 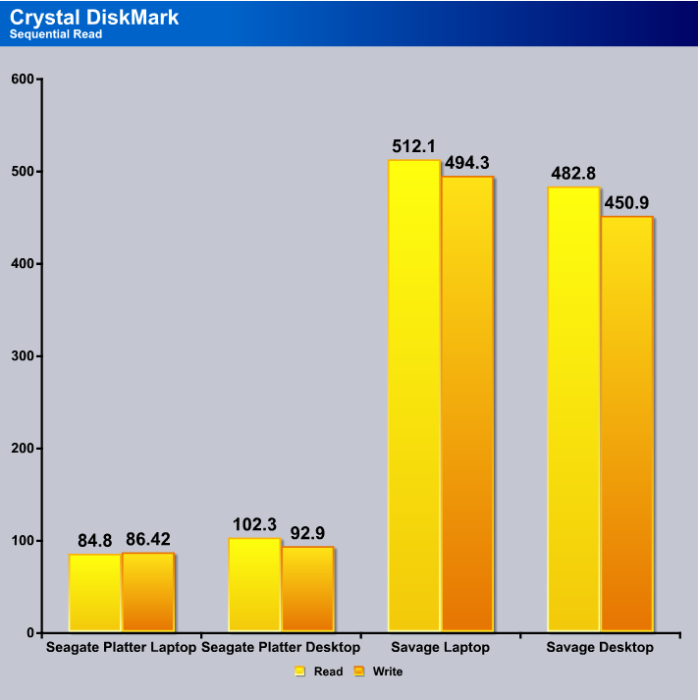 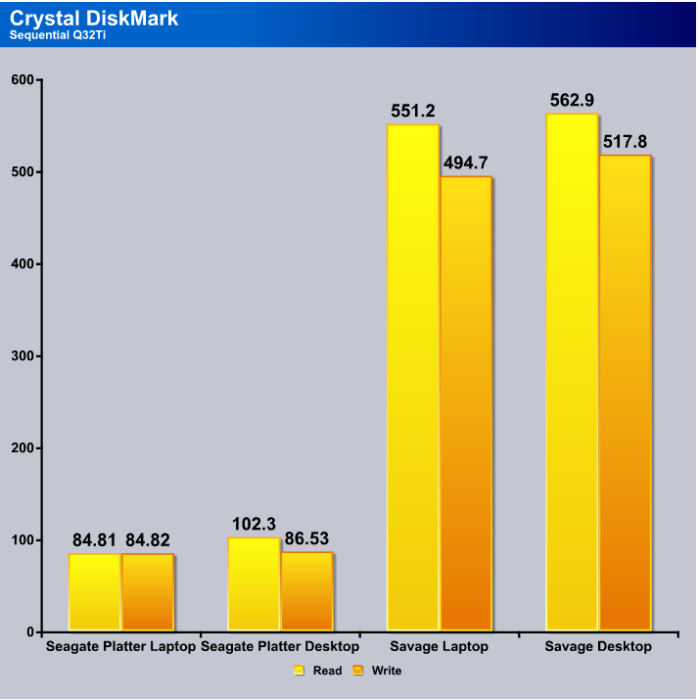 The last test in CDM is the Sequential Q32T1, and the Seagate drive runs around 84MB/s on Read and Write in the laptop. This drive gets a little boost in speed to 102.3MB/s Read and 86.53MB/s Write while in the desktop. Put the Kingston HyperX Savage in the laptop, and it hits 551.2MB/s Read and for Write performance it hits 517.8MB/s. 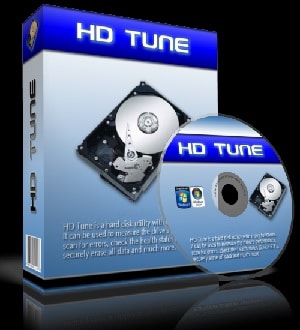 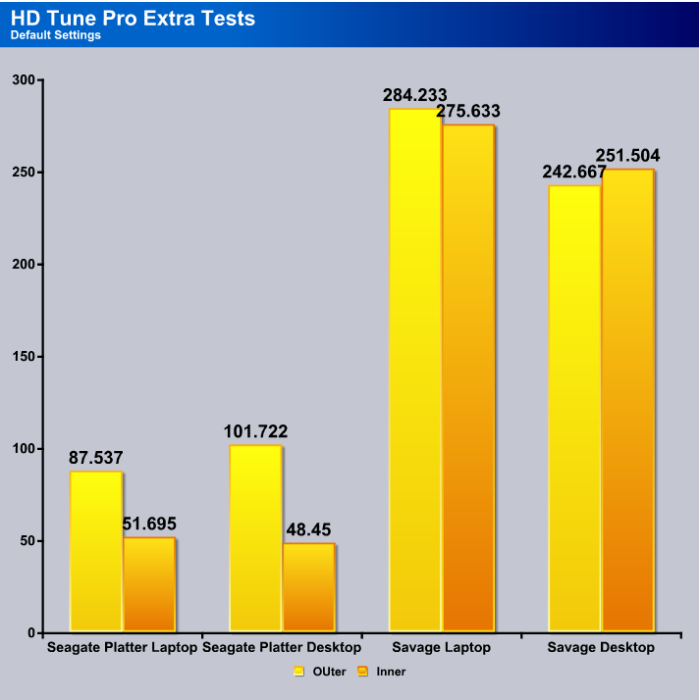 HD Tune Pro tells pretty much the same story that all the other benchmarks tell. The Seagate drive runs at 100MB/s or less on larger transfers and does horrible on smaller transfers. The Kingston HyperX Savage performs more than twice as fast. 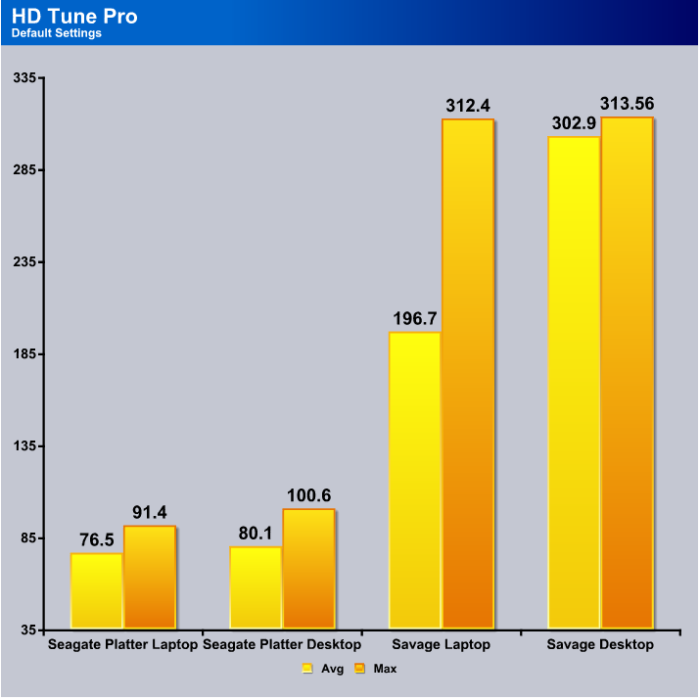