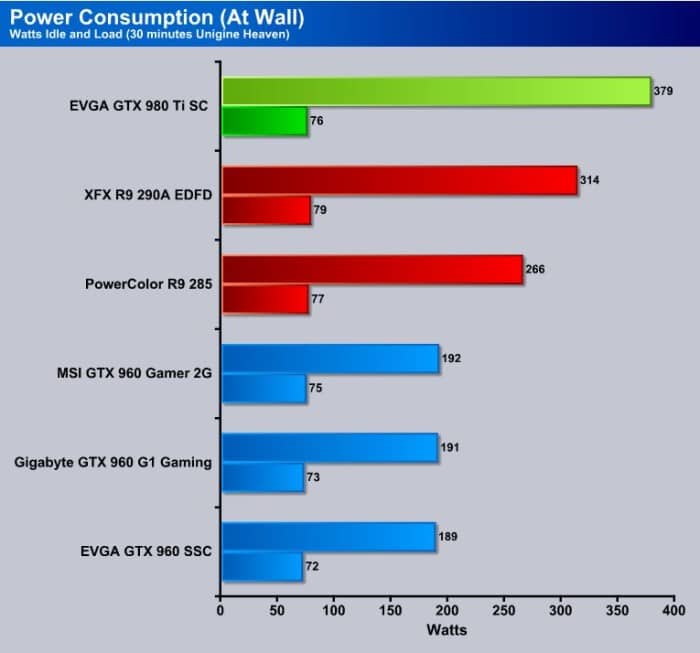 You expect major GPU offerings to consume a little power but at an idle the EVGA GTX 980 Ti SC ACX 2.0 pulled 78w from the wall and that’s total system consumption. Now drive the fully overclocked Haswell CPU to the max while stressing the GPU at almost 100% full time and the system was pulling 379w. Face it with Titans, GTX 980 Ti and high end AMD GPU’s you’re not looking for a power consumption friendly GPU you are looking for raw playing power and the EVGA GTX 980 Ti SC ACX 2,0 delivers that hands down. The average user is lucky to run 2 – 3 hours a day gaming and at that rate the power a GPU consumes is a pretty minor part of the power bill. Install a tankless water heater and watch the electric bill drop but don’t be blaming your GPU unless you Fold At Home or Bitmine. 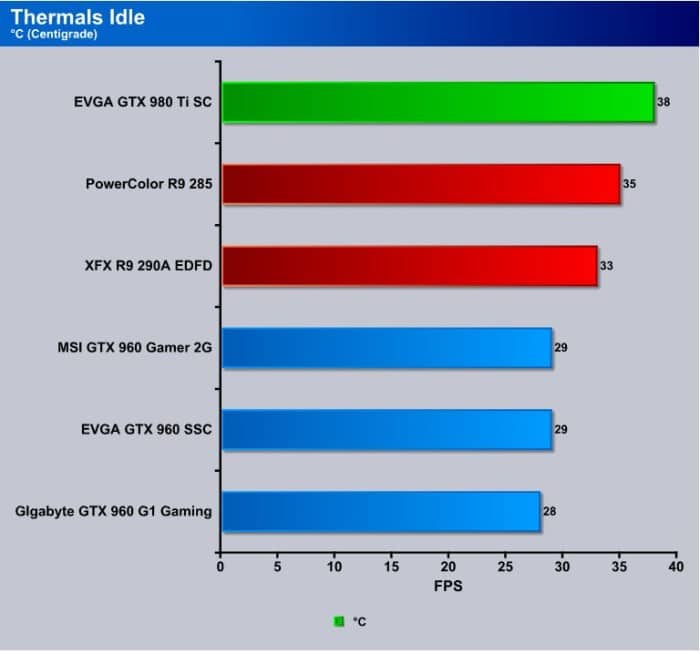 Thermally speaking we were quite impressed with the EVGA GTX 980 Ti SC ACX 2.0. It did run what we would consider warm at an idle but this is the desert and the GPU likes to hit around 38°C and hover there. Keep in mind by this time we were on a DIYPC open Chassis test bench with no fans at all helping cool the GPU. People think oh that’s an open chassis and the room air will cool it better than a Computer Case, that’s just not the way it works. Modern Computer Chassis are designed with heat removing airflow, open test beds only the heat rising properties of thermal law helps cool the GPU, 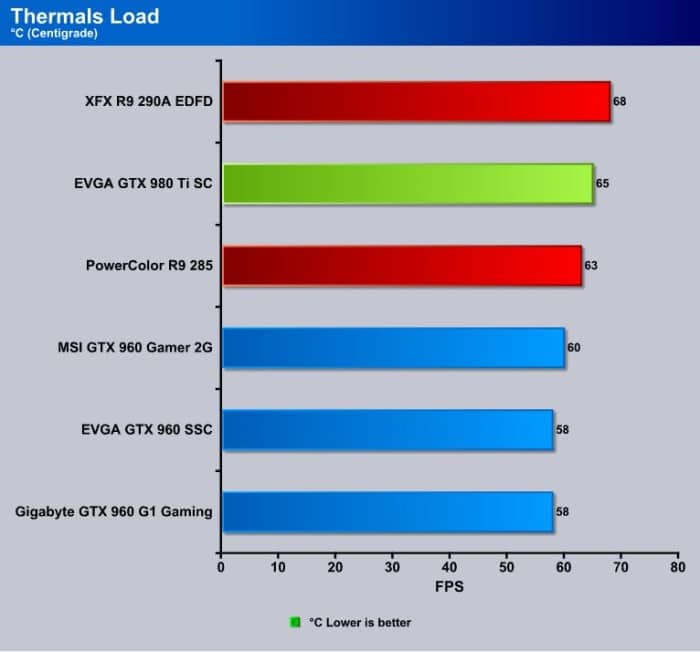 We all hate noisy or whiny fans that intrude on our gaming / computing time. We run several noise level tests, Complete Idle, spiking load where the graphics load fluctuates between high and low load, and high load.  Our Decibel meter registers at 30  dBA. We generally record sound levels sitting next to the tower with the tower at floor shelf level. We put the decibel meter close to where our ear would be and take measurements from there.  To better get an idea of what the sound compares to here is a scale of typical sound levels.

Idle we got a 33.2 dB(A) from the EVGA GTX 980 Ti SC ACX 2.0+ which is about as silent as a GPU fan gets. We went for the jugular vein on maximum noise and just kicked the fan up to 100% where we registered 44 dB(A) on an open Chassis test bench. Inside the SilverStone Fortress FT05 which has sound dampening material at strategic locations we got 39dB(A). Noise testing is always done at night when the lab is quiet and no outside noises intruding. In that environment the fans seemed a little noisy but it’s just the fans cooling the massive computing power of the GTX 980 Ti Core. It’s a fact that the harder you push a processor or GPU the more heat you produce. What is amazing to us is that EVGA held the line at 68°C during overclocking. We are entirely happy with the noise levels of the fan and the noise is more the whooshing of air being driven than fan motor noise. (In other words it’s not that whiny high pitched grate your teeth noise)

Overclocking the Maxwell series of GPU’s is different from GPU’s in the past. If you want to take a peek at our “Lets Talk Overclocking” page we included it in this review for your convenience. We like to use a variety of tools for overclocking however if the cards vendor, in this case EVGA has a provided OCing tool we use that tool. We also use GPU-Z to verify OC settings were applied to the GPU core, check thermal performance and core load. If need be we will use another vendors tools to monitor a cards thermal and core performance but that’s just for confirmation. We regularly use Kombuster for stress testing merely because it provides one standard test for stability, thermal readings and keeps the playing field level. Using different software say FurMark as opposed to Kombuster might skew the testing numbers so we just don’t switch out. We will stability test with a variety of programs and OC with the same variety but thermal and noise readings are taken using Kombuster. 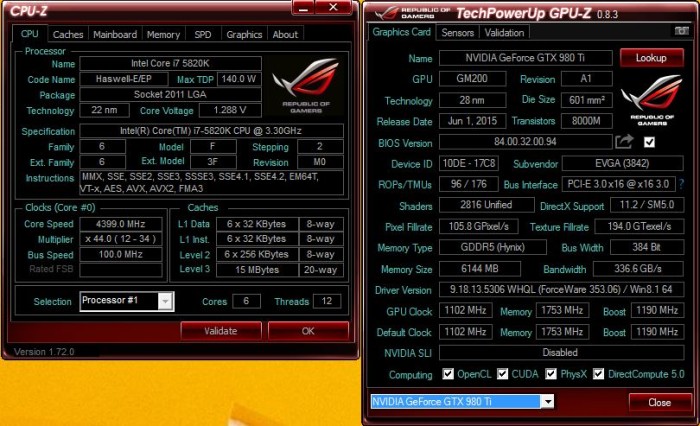 Here’s our CPU settings showing a 4.4 GHz overclock, our Kingston Fury Ram running at factory spec 2400 15 – 15 – 15, Bclk running at 100 (which is why we like 2400 MHz ram, BCLK doesn’t have to boost to 125 MHz for 2400 MHz or lower). GPU-Z confirms a GTX 980 Ti and shows the vendor as EVGA. Stock clocks are as advertised 1102 MHz core, 1753 MHz memory. For those not hip to GDDR5 memory when people say effective clock they mean base speed X4 so the 1753 MHz memory is running at 7012 MHz effective. Everything shows as it should, tested and trusted OC tuned to a razors edge of perfection and a factory overclocked Mini Titan X (we like Mini Titan X better but technically a GTX 980 TI). 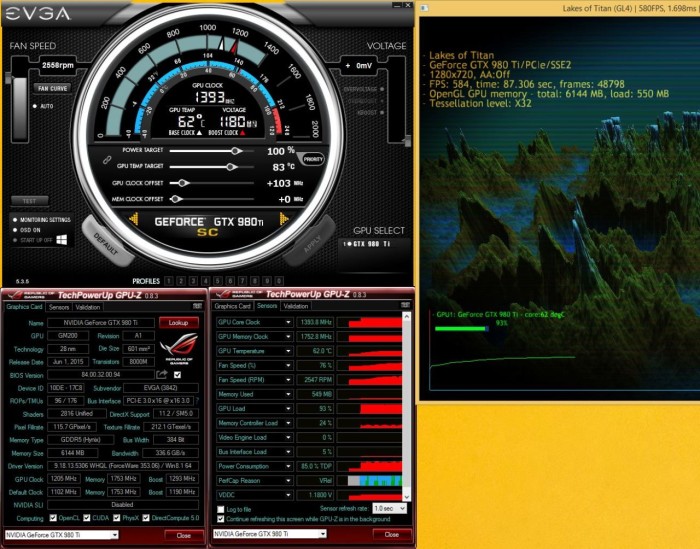 Overclocking is a journey not a destination and we prefer to lead you through the progress as we walked the GPU up. Just throwing a screen shot of GPU-Z or some utility out there is as useless as fishing stories. The fish was always bigger when no one was looking. Take any GPU and you can set ridiculous core clocks and memory speeds long enough to get a screen shot.

We started with a 100 MHz factory OCed card so we weren’t sure how much to expect for OCing overhead. We started out with a 103 MHz OC with no added voltage and got a stable OC. We were just dealing with core speeds to begin with. 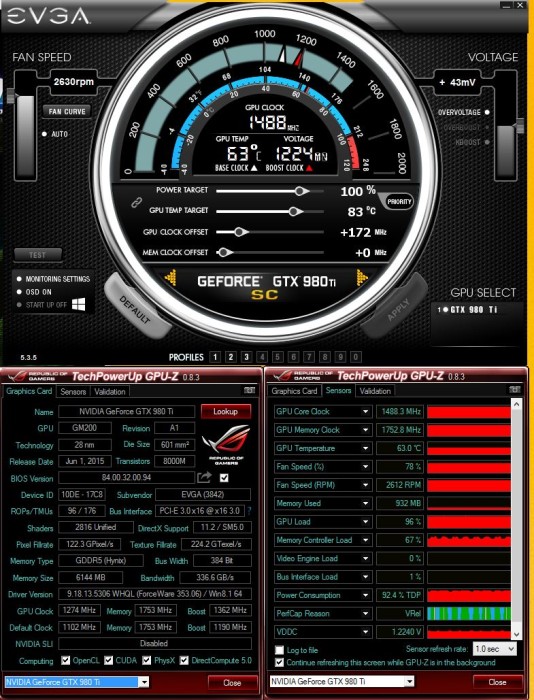 Skipping a couple of steps we bumped up to 1274 MHz with nothing but a + 43mV bump and got a stable OC. By this time we were shaking our heads because in general as GPU’s grow more expensive the more careful a vendor is about OC overhead. Yet here we sit with a $669 GPU running a 272 MHz overclock stable with a minimal 43mV voltage bump. That kind of OC will bring a smile to your face. 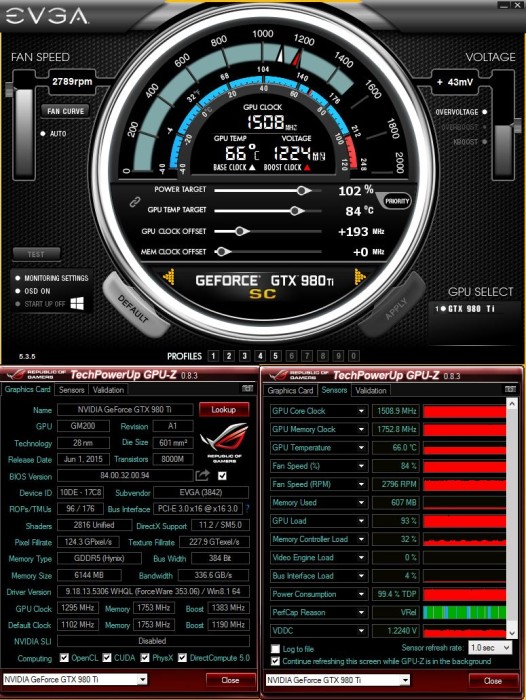 Now you are dealing with 6GB of GDDR5 so if you’re going for a maximum Core / Memory OC just kick the Power Target up to 110% back off the +43 mV bump and reset that to +0. If your core and thermals are locked increasing Power Target to 110% will increase Temperature Target to 91°C.

Keep in mind this is after you establish a maximum core clock OC, with an established core OC we proceeded to move memory speeds up and stability test. Memory OCing on Maxwell you need to run a minimum of 4 or 5 minutes stress before stepping up the speed during each incremental step up the OCing slope. Less stress time might not heat the Mosfets or memory up enough and you end up with a faulty long term unstable OC. 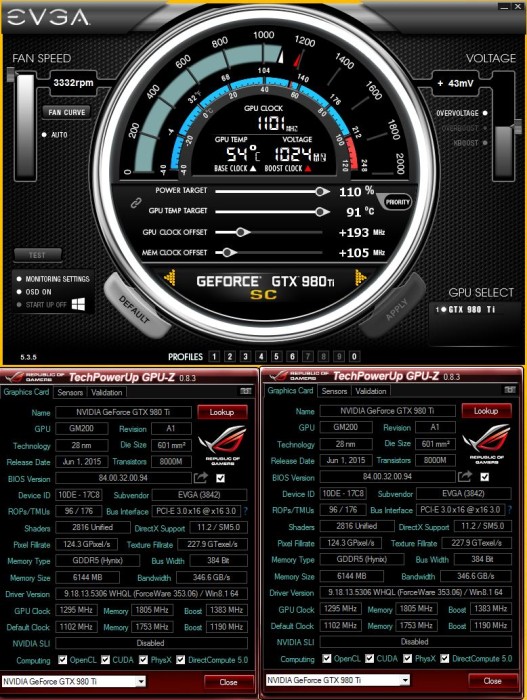 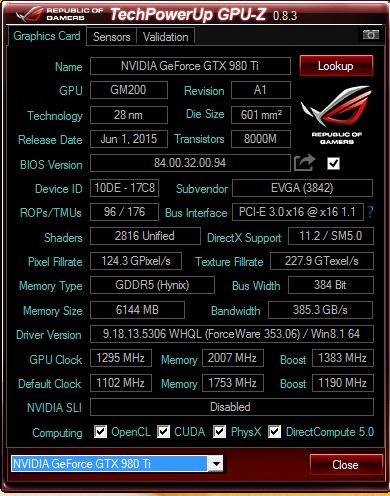 Here we are on the breath holding ragged edge of overclocking again enjoying that adrenaline rush. Our Stock Core Clock is 1102 on the Factory overclocked EVGA GTX 980 TI so adding a Core offset of 193 we get our max core OC of 1295 MHz Our Stock memory speed is 1753 MHz and we reached 2007 MHz stable playable and bench-able at an effective speed of 8028 MHz.

Now do we plan on OCing the EVGA GTX 980 Ti SC like this 24 / 7, no we don’t this is strictly for “what she will do purposes” and as soon as we stability tested we backed down to default factory OCed speed. Why did we back down to the original factory OC. The EVGA GTX 980 Ti SC ACX 2,0+ is already eating everything we throw at it like a 100 calorie snack pack at a weight lifters convention. The GPU just doesn’t need the additional boost but we have 5 or 6 profiles saved in EVGA PrecisionX 16 so if we feel the need for a little added speed it’s there at our finger tips.

We love our EVGA GTX 980 Ti SC ACX 2.0+ and there’s just no need to lead it to a premature grave with a constant OC. If you choose a 24 / 7 OC think about how often and when you need that extra boost. If you feel you need the extra speed you may be better off with SLI to get the speed you crave. With the power we are seeing on the EVGA GTX 980 Ti SC ACX 2.0 it should cover you for game playing for a couple of years so protect your investment.